As the jeep makes its way on the dusty road, the savannah grass spreads endlessly as far as you can see.

Suddenly, your guide points to zebras grazing peacefully nearby. As you look closer, you spot lions hidden in the grass as they observe their soon to be prey.

This is a scenario that may be unfolding under your own eyes when you go on a safari in Africa.

Having a chance to come up close and personal with the wonderful African wildlife makes a safari unique. It’s one of those memories that you will treasure for many years to come.

If having an amazing wildlife experience during your safari is also high on your bucket list, you should know that one of the best places to do so is Serengeti National Park, in Tanzania.

Here, you can witness the heart-pumping Great Migration featuring millions of animals, spot the Big Five animals, and even catch a glimpse of the highly endangered wild dogs.

From the abundant wildebeest, zebra, and lion to the very rare black rhino and wild dog, here are some of the magnificent wildlife you may catch a glimpse of during a safari in Serengeti National Park.

Without a doubt, one of the most important reasons why safari goers head to Serengeti is to spot the majestic Big Five.

A term coined to designate the most difficult animals to hunt now refers to some of the most iconic African animals: the African elephant, the Cape Buffalo, the rhinoceros (white and black), the lion, and the African leopard.

Throughout the Serengeti National Park, elephants, Cape buffalos, and lions are common. Occasionally, you’d be able to spot leopards, whereas black rhinos are quite rare. Unfortunately, there aren’t any white rhinos in the park. 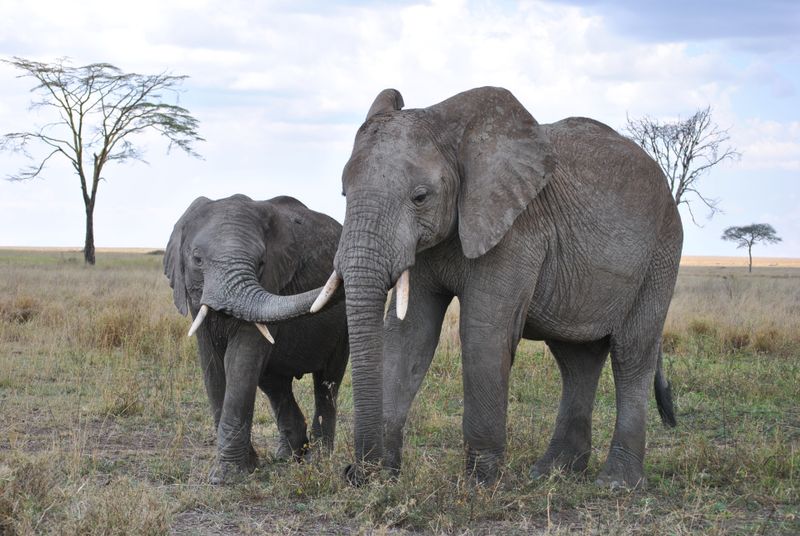 With more than 2,000 elephants living in the park, the chance to spot them is incredibly high.

Highly intelligent creatures, they can express grief, self-awareness, and compassion. They are also very caring. When a baby moans, the entire family will go over and caress it.

Did you know that elephants have their own “handshake”? When they meet, they extend their trunks as a greeting. 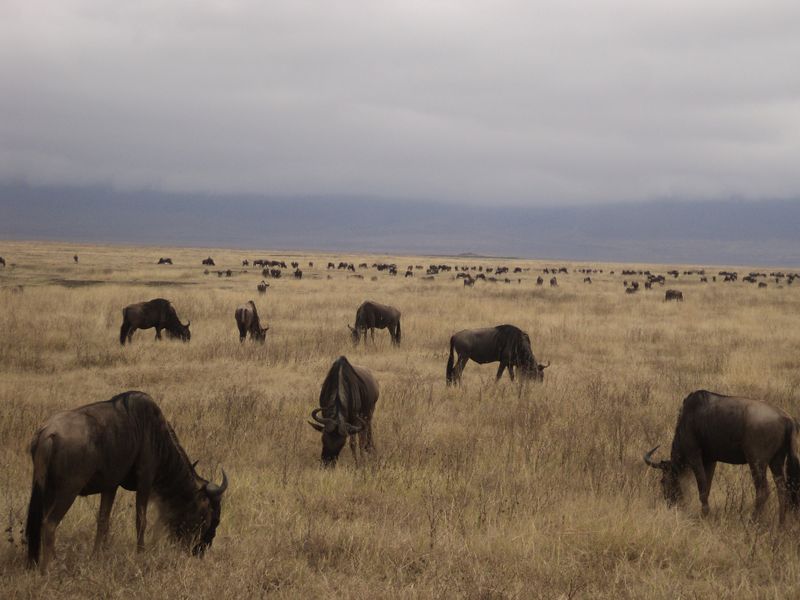 With over 1,000 populating the Serengeti National Park, it’s almost guaranteed you’d spot a buffalo on your safari.

Especially during the wet season, huge numbers of buffalos can be found in the Serengeti Plains, to the south of the park.

Notoriously bad-tempered, these dangerous animals need to drink water every day, so it’s very likely they’d be around waterholes. 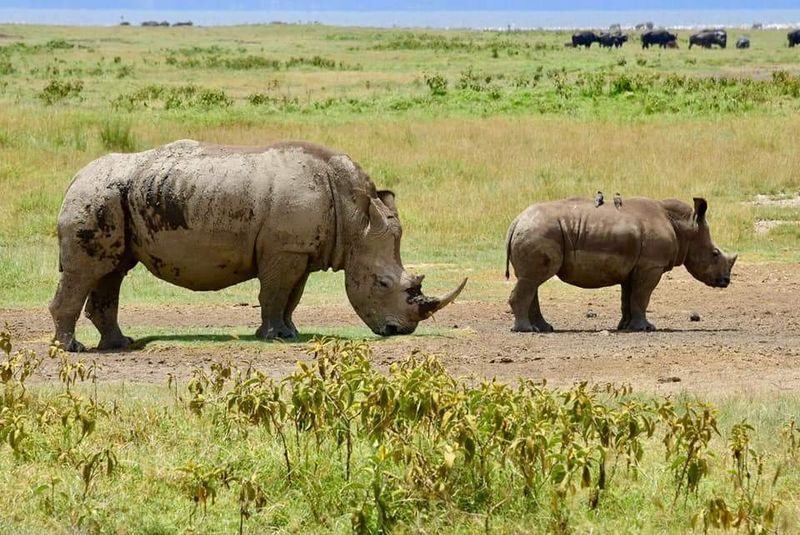 Over the past years, the population of rhinos in the Serengeti has decreased a lot. There are now only an estimated 700 animals left in the park.

Their valuable horn makes them prone to poaching. Add in the fact that a female can only give birth every 5 years and you have a recipe for one of the hardest animals to spot. 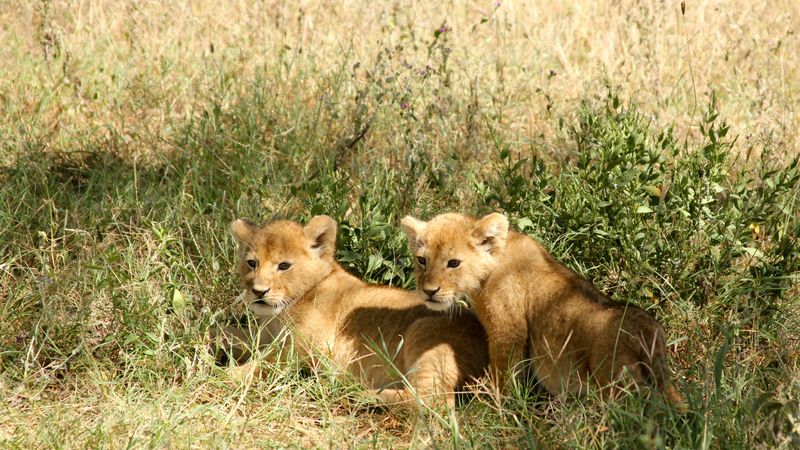 The King of the African savannah is always a magnificent animal to encounter during your safari.

And, thankfully, Serengeti National Park is home to large a population of lions which makes them incredibly easy to spot. They can be easily found under the shade of a tree, where prides of 10 or more sleep or sit.

Your chances of catching a glimpse of the lions are particularly high from July to October in Northern Serengeti. 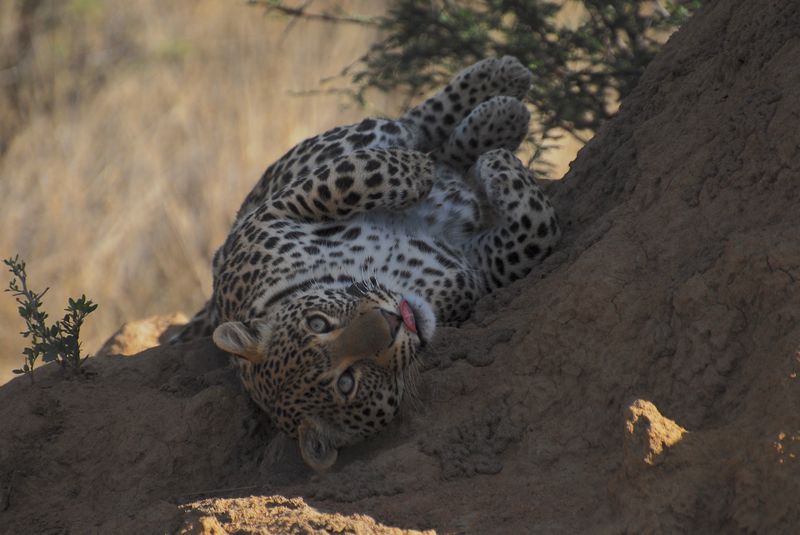 The most elusive of the Big Five, the African leopard can be spotted around the Masai Kopjes area in Serengeti.

They love to soak up the sun on the large granite rocks! Else, make sure to look for them in the trees! “The Prince of Darkness” is not only shy but also a master at camouflage.

Ranked right above the cheetah in the pecking order, it’s still a mystery why the leopard allows hyenas to steal its kill. One of the theories is that leopards have an inferiority complex and prefer to hide in the nearest tree than to confront the hyenas.

The Great Migration is the highlight of Serengeti so there’s no surprise most visitors come here to see this magnificent spectacle of giant herds moving across the land. 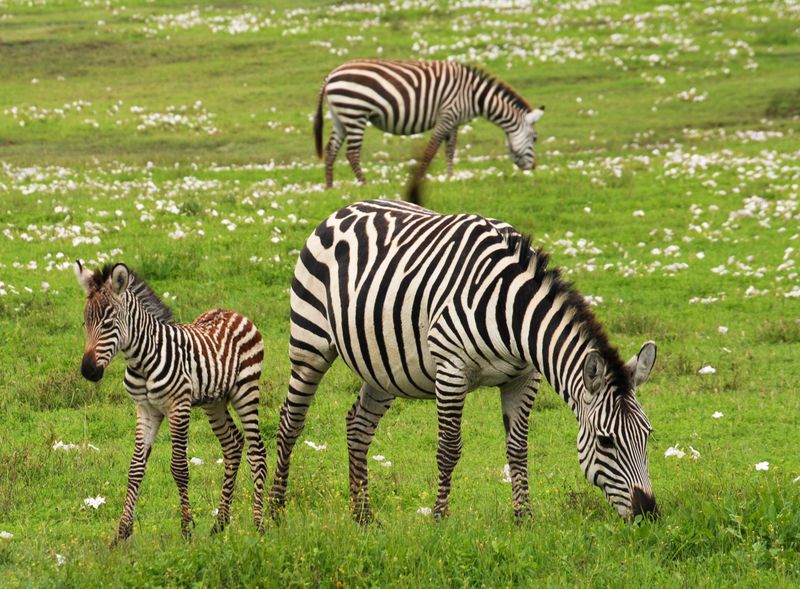 Especially during the wet season, the chances of spotting zebras are extremely high. They are abundant in the Serengeti National Park, particularly during the Migration.

Closely related to the horses and donkeys, they can easily be recognized by their white and black stripes. It’s believed the stripes work as camouflage. When the zebras stay together, it’s harder for predators to mark their target. 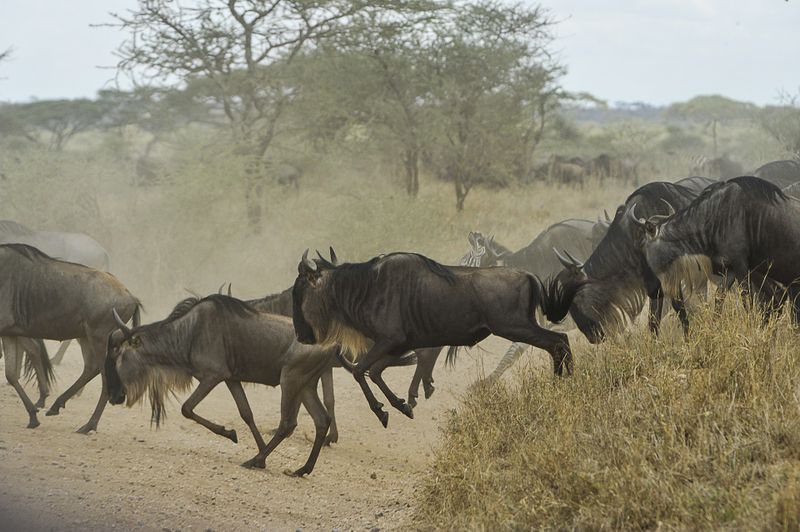 Between January and March, half a million wildebeest are born in the Serengeti.

As many as 1,500,000 wildebeest participate each year in the Great Migration, therefore the chance of spotting them is extremely high.

Since they don’t have any natural enemies, they often split into smaller herds that circle the main one. 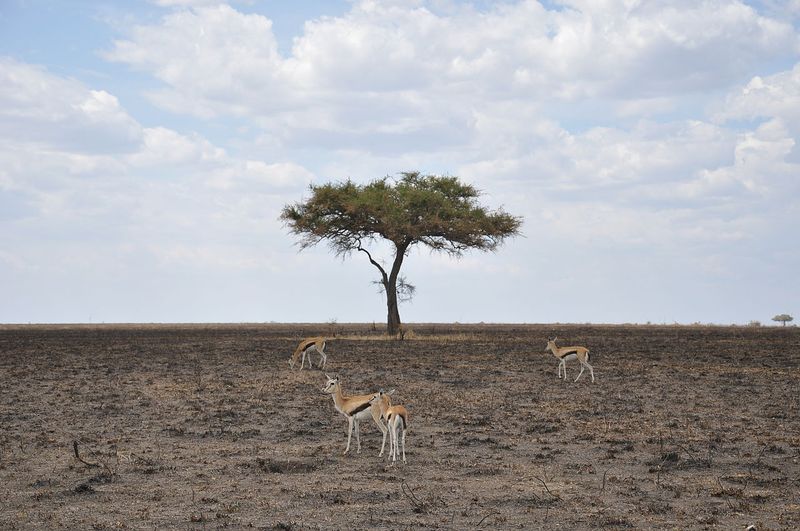 Probably the best-known gazelle, the Thomson’s gazelle is the fifths fastest animal on the planet. It can reach speeds of up to 80-90kmph (50-60mph).

They love to feed on short grass but are known to migrate into taller grass and dense woodland.

Their number grows fast at the beginning of the wet season when food is abundant.

Thomson’s gazelle’s main predator is the cheetah. But although the cheetah can be faster on short distances, the gazelle can outlast it in longer chases. Sometimes they are also chased by leopards, hyenas, or lions, but the gazelles are faster so these predators typically attack the young or the weak.

Other animals in Serengeti National Park 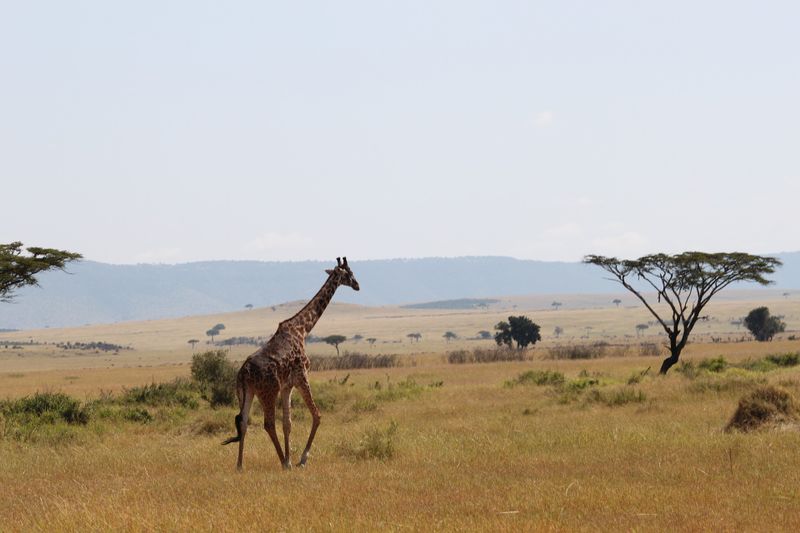 Common throughout the park, the giraffe is Tanzania’s national animal. Therefore, there are strict laws that protect this magnificent animal.

Vast herds of Maasai giraffe roam the Serengeti and can be easily spotted. They are a subspecies and differ from the others by having darker and smaller patches, separated by light brown lines.

Although imposing in height, the giraffe has its own natural predators: lions, hyenas, leopards, and wild dogs. 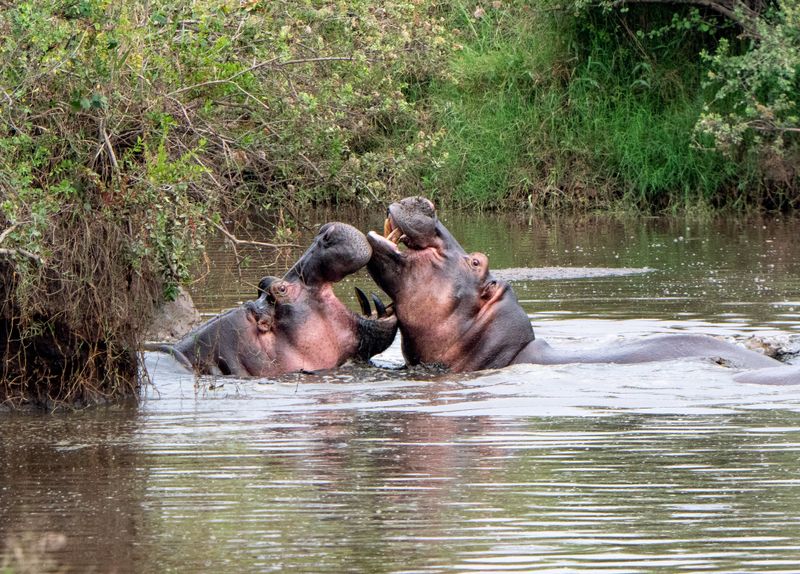 The hippo is common in the Serengeti and the best place to spot them is at the Serengeti Hippo Pool, located in Central Serengeti, where the Seronera and Orange rivers meet. Do note that this is one of the few places where you are allowed to leave your car and see the hippos on foot.

Although you are bound to find them at pretty much any waterhole.

Large in size, they are anything but gentle. And while the predators won’t try to attack an adult hippo, lions, Nile crocodiles, and hyenas prey on the calves. 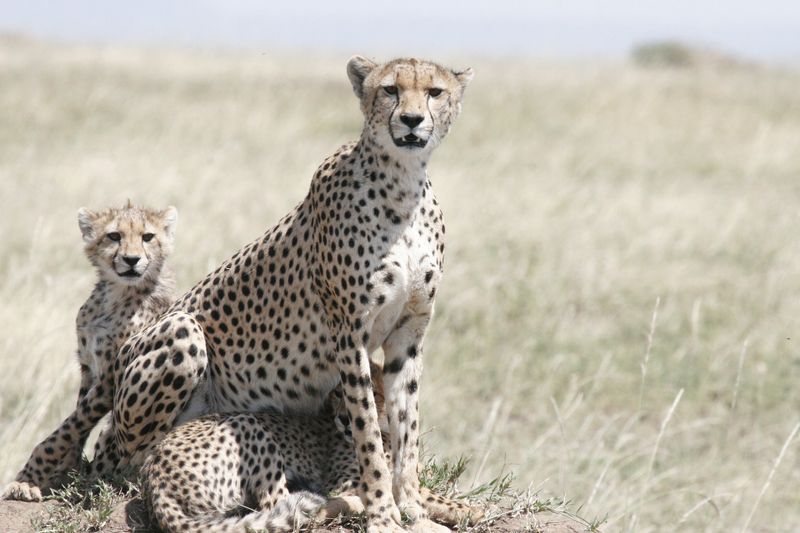 The East African Cheetah lives in the grasslands and savannahs of Tanzania (as well as other East African countries) and is common in the Serengeti.

Back in 2016, it was estimated that more than 1,000 cheetahs live in the Serengeti / Mara ecosystem.

In the Serengeti, they hunt when the lions and hyenas are inactive. They prey on large herbivores, such as gazelles, impalas, wildebeest, and waterbucks. Their favorite prey is, however, the Thomson’s gazelle.

Unfortunately, the cheetahs are threatened by the African lion. The lions can and will kill cheetahs’ cubs and also steal the adults’ food.

Generally, the cheetahs are easy to spot in Central Serengeti, as well as Ndutu and Namiri Plains. 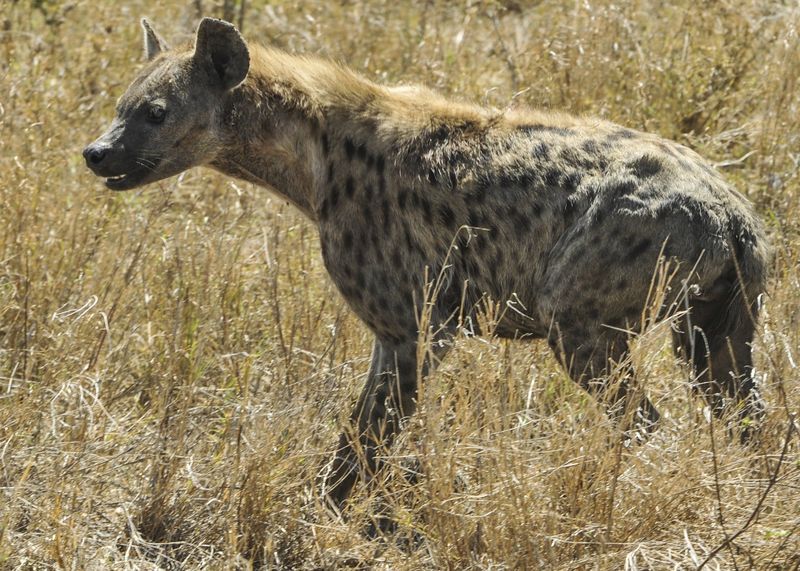 The largest member of the Hyaenidae, the spotted hyena is probably the most misunderstood of all the animals in Africa.

They are common throughout the Serengeti National Park and there are an estimated 7,000 hyenas in the park.

Social animals, hyenas live in large communities known as “clans”. As their prey is migratory here, the clans are smaller in the Serengeti than in Ngorongoro Crater, where the prey is sedentary.

Studies have shown that they are one of the most intelligent and socially complex mammals in the world, comparable to the primates.

Because they work in groups, they can take down large prey, such as buffalos, wildebeest, and zebra. And yes, they are also opportunistic and love to steal the prey from other predators. 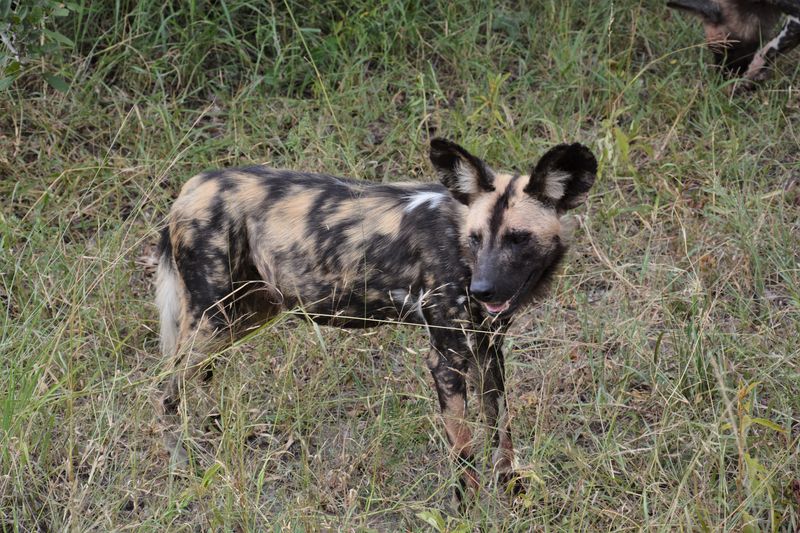 The “painted dogs” are one of the most beautiful yet endangered animals in Africa. Rarely spotted in the Serengeti, they are native to the open plans of the Sub-Sahara.

Back in 1992, the entire population vanished in the park and was presumed extinct. Thankfully, by 2004 the population has started to reestablish itself in packs. Efforts have been made to recolonize the park and, thankfully, they were successful. 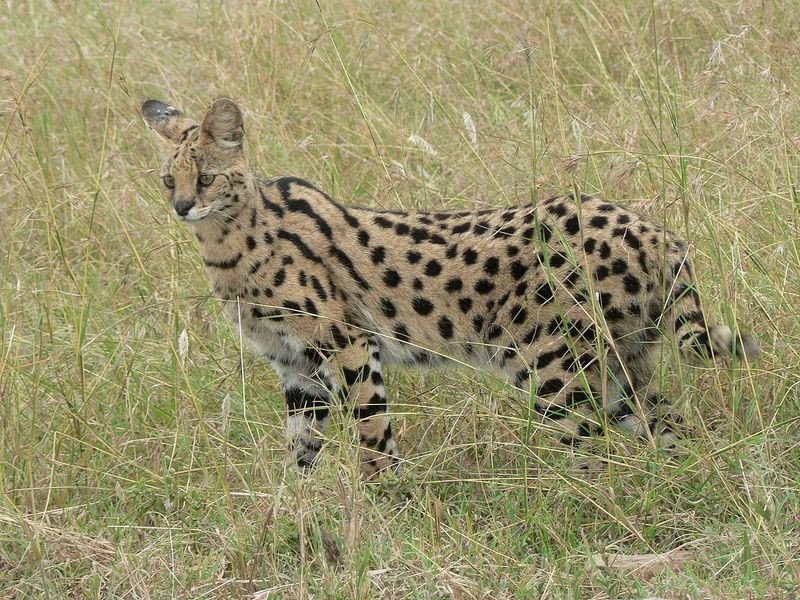 Found throughout Sub-Saharan Africa, the serval is a feline known for its beautiful coat.

They are nocturnal, solitary, and shy animals, which makes them trickier to spot. Still, one of the places where you may spot one is in the Seronera area of Central Serengeti. 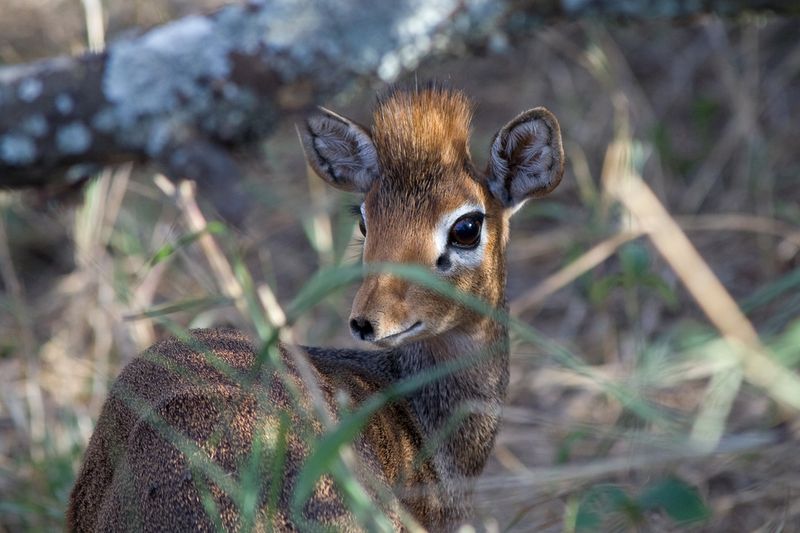 A breed of dwarf antelope, Kirk’s dik-dik doesn’t drink water from the waterholes. Because of their small size, they rather avoid being exposed to predators and can subsist off the moisture from fruits and leaves.

Excited to spot these amazing animals and more with your own two eyes? Book a private safari in Tanzania and let yourself be immersed in the wonderful African nature. 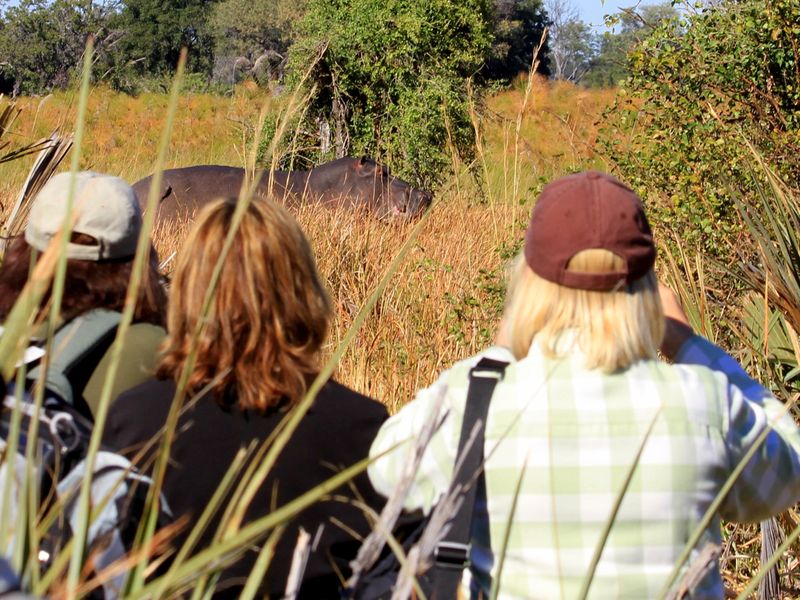 What to expect when going on a walking safari

As you explore the African bush on foot, you hear leaves rustle and notice some unfamiliar scents. Suddenly, your guide points to a footprint on the ground. Lo and behold, it’s a lion’s footprint! 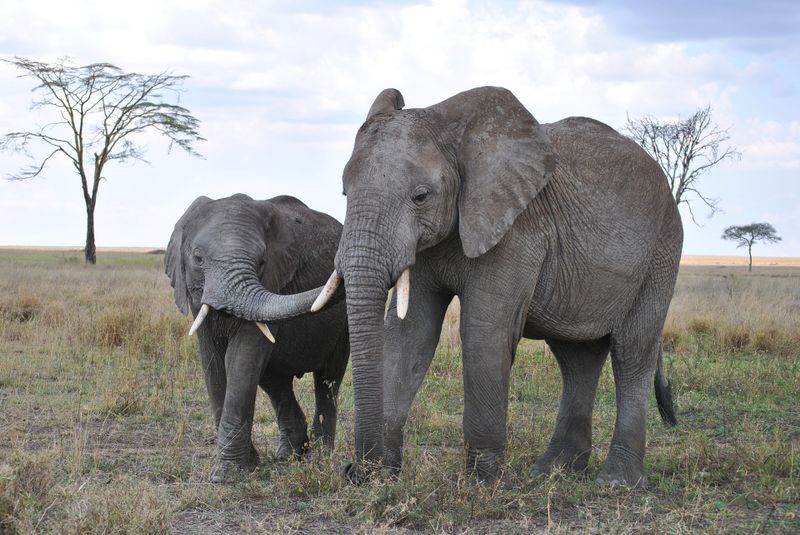 Sustainable Travel: Ways to Make a Positive Impact on a Safari

Generally, sustainable travel is all about traveling lightly, leaving no footprints, and staying in accommodations that are serious about the environment, wildlife, and communities around them. 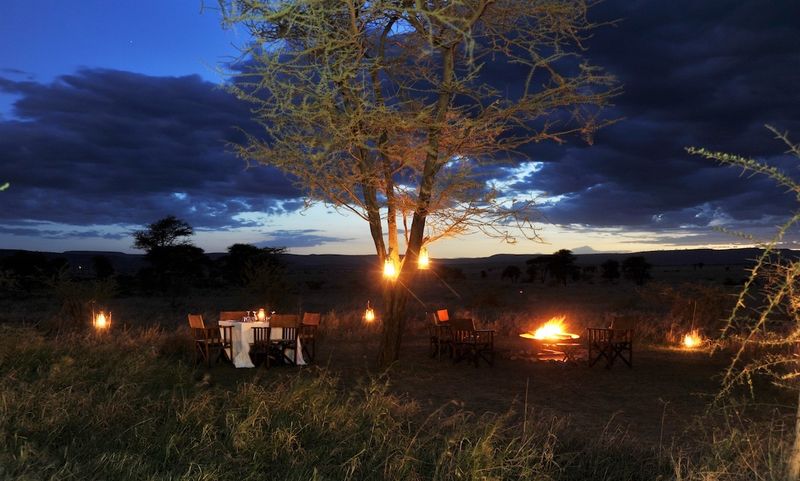 What to Expect When Going on a Camping Safari

As the sun sets, imagine pitching your tent in the vast African bush surrounded by a blanket of starry skies and the sounds of wild animals.

We have the best deals and offers from 787 organizers all over the world! Get them into your mailbox every week!