What Exactly Are the Big Five Animals? And Where Can I Spot Them? [Updated]

If you’ve ever done a search for safaris on the web, chances are you’ve encountered the term ‘The Big Five animals’ or ‘The Big Five’ game safaris amongst your results. Though it may sound straightforward, there are many misconceptions about the five species of the African wildlife included within the group.

On this post, you’ll find interesting insights to help you have a better understanding of Africa’s renowned Big Five animals once and for all!

Consisting of the African lion, the black rhinoceros, the African elephant, the African leopard, and the Cape buffalo, many would assume that the term ‘The Big Five’ is attributed to the animals’ large size.

However, it was actually coined by big game hunters who thought that these five African mammals were the most dangerous and most difficult to hunt.

Fortunately, today, thanks to decades of worthwhile efforts in the conservation and preservation of the wildlife, the Big Five safaris no longer refers to hunting safaris. Instead, it now provides travelers all over the globe with the priceless opportunity to observe the magnificent creatures frolicking in their own habitat.

Though all five species are native to Africa, if you would like to see them all at one go, note that you will only be able to spot them in certain destinations.

Here’s a list of the countries to consider visiting (in no particular order):

Want to find out more insights about the Big Five animals before you ‘meet’ them in real life? Below are some interesting facts you may be interested to know about each species: Often referred to as the  “King of Beasts” or the “King of the Jungle”, the lion is without a doubt one of the most sought after and powerful creatures in the animal kingdom. The African lion is also thought to be the most social of all the big cats. They can be found roaming around together in groups called ‘prides’.

Each pride usually consists of a herd of about 15 lions which includes only one or two males (with one being the dominant male) and the rest of the members include females and cubs of different ages.

With an average lifespan of up to 15 years old, you can generally tell how old a lion is by looking at its mane – the darker it is, the older he or she is.

The female lions are the hunters of the pride – usually on the prowl at night, in the afternoon or early morning. Their prey includes Wildebeest, Zebra, Giraffe, Buffalo – and even young elephants. You can usually spot lions hanging around in open plains, where their ‘victims’ often congregate thanks to plenty of grazing and permanent water sources in these areas.

Though they are found throughout Africa, however, they are best spotted on safaris in Kruger National Park as it is home to over 1600 of them! Note that you will be more likely to find them on the east side of the park. 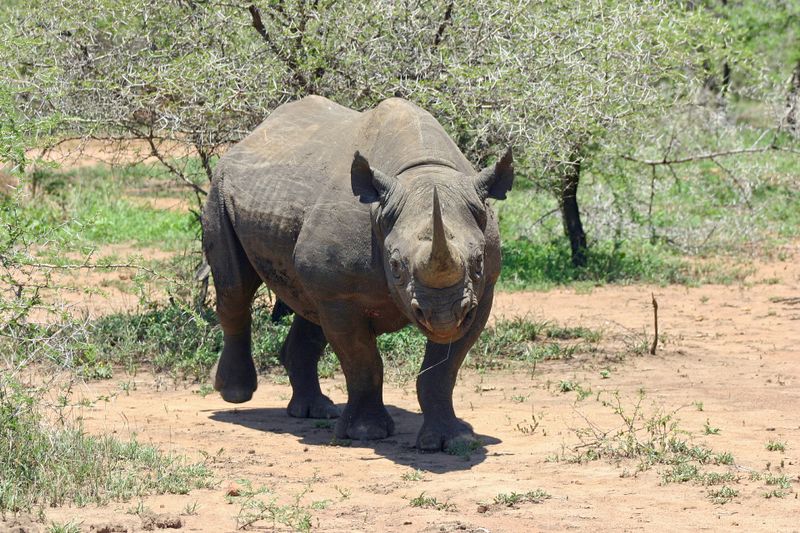 What makes the Black Rhinos stands out from its ‘cousin’ the white rhino are their double (two) horns. Their front horn (located just above their nose) is considered the prominent one. It may grow as much as 3 inches annually and up to five feet long.

This prominent horn is the main reason why this species is still poached. It is thought to have potent medicinal use and is often highly sought after in Asian countries such as China and Taiwan. Whereas in North Africa and the Middle East, it’s usually sold as ornamental dagger handle.

The Black rhinos can be best spotted in Namibia almost year round. Simply go on a safari in Etosha National Park and you will find black rhinos roaming the park’s Okaukuejo watering hole!

With the exception of females and their offspring, the Black Rhinos are actually solitary creatures – preferring to live alone. They feed at night as well as during dawn and dusk. Their sustenance mainly comes from leaves and fruits found in trees and bushes.

You’d also be interested to know that rhinos actually have poor vision, they make it up with an excellent sense of smell and hearing.

Though its name refers to its color as black, its actual colors vary from brown to gray. A native to Eastern and Southern Africa, unfortunately, this species is still one of the most hunted animals in Africa and it is the most endangered out of the Big Five animals. The largest land animal in the world, they can be found in 37 different countries in Africa. There are actually 2 different species of the African elephant: the savannah elephant and the forest elephant, both of which are fiercely poached.

The forest elephant is usually smaller with rounded ears as well as tusks that grow downward. While the Savannah elephants can be found in the savannah of Africa, the forest elephants inhabit the rain forests of Central and Western Africa.

The best place to view these mighty elephants is in Botswana where travelers constantly find them while going on safaris in Chobe National Park as Chobe has the highest concentration of elephants with 50,000 to 70,000 of them roaming the vast area.

Highly social animals, they are known to be able to communicate with others across large distances at a low frequency which can not be heard by humans.

Also, did you know that many plant species have seeds that depend on being passed through the elephant’s digestive tract before they can germinate? In fact, at least a third of the trees found in West African forests rely on elephants for dissemination. A solitary, secretive and nocturnal animal, the African leopard is difficult to spot as they like to rest and stay hidden during the day. Because of this, they tend to be the most elusive and less seen out of the Big Five animals when you go on a safari.

Your best bet to spot a leopard will be in Zambia and on night safaris in South Luangwa National Park. The South Luangwa Park in Zambia is one of the few parks that operates a night safari, and since leopards are nocturnal creatures, the possibility of you finding them increases!

African leopards have a preference for rocky landscapes with dense bush and riverine forests. That said, they are known to adapt quickly, seldom staying in an area more than two or three days at a time.

Thanks to their adaptability, they are able to survive the loss of their previous habitat due to increasing human settlement.

A stealthy hunter, once they caught their prey, they’ll often safeguard it by taking it up to the trees to prevent other animals such as lions or hyenas from stealing their food.

What you may not know about this beautiful creature is that they are also strong swimmers and would even occasionally consume fish or shellfish like crabs! 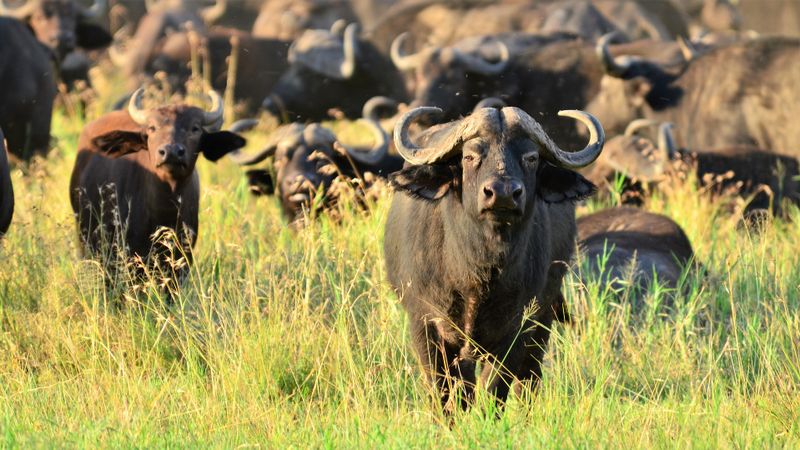 The lesser known species out of the five on the list, the Cape buffalo are formidable animals thanks to their size, large herds, and horns. They may be active throughout the day and night.

On average, they spend 18 hours a day foraging and moving around in herds of up to 500 buffalos. Although they can be seen at Kruger National Park, the best place to spot the buffalo is actually on safaris in Kidepo Valley National Park, Uganda where up to 4,000 individuals gather at once making it a spectacular sight!

Often hunted by the lion, they are extremely loyal to its herd and would often try to rescue another member if they are caught by attacking the predator. Sometimes hunted by humans, they reportedly kill more hunters in Africa than other animals.

Something that you may not already know about them is that they have an excellent memory and known to ambush hunters that have wounded or injured them – even years after the incident.

Also known as the African Buffalo, the Cape buffalo is actually not closely related to the water buffalo (commonly found in Asia) though they do look somewhat similar to each other. Unlike the water buffalo, they are actually quite dangerous and has never known to be domesticated.

Looking to catch glimpses of a more diverse set of animals during your safari trip? Be sure to check out BookAllSafaris.com’s vast selection of wildlife safaris!

Lystia is a contributing writer at BookAllSafaris.com. A lover of travel and animals, she passionately believes that the wildlife and nature should be not only appreciated but also preserved and fiercely protected.

Home to 21 national parks, South Africa is a vast country that offers many interesting places to visit and places to marvel at.

People save for years to travel to Africa and finally tick off their bucket list destinations and activities.

Planning Your Safari in Africa in COVID-19 Era

The pandemic has changed the world in ways no one could have predicted...

3 Days All Inclusive Mikumi and Udzungwa Trekking Safari in Tanzania

We have the best deals and offers from 418 organizers all over the world! Get them into your mailbox every week!