What You Need to Know Before Visiting Etosha National Park 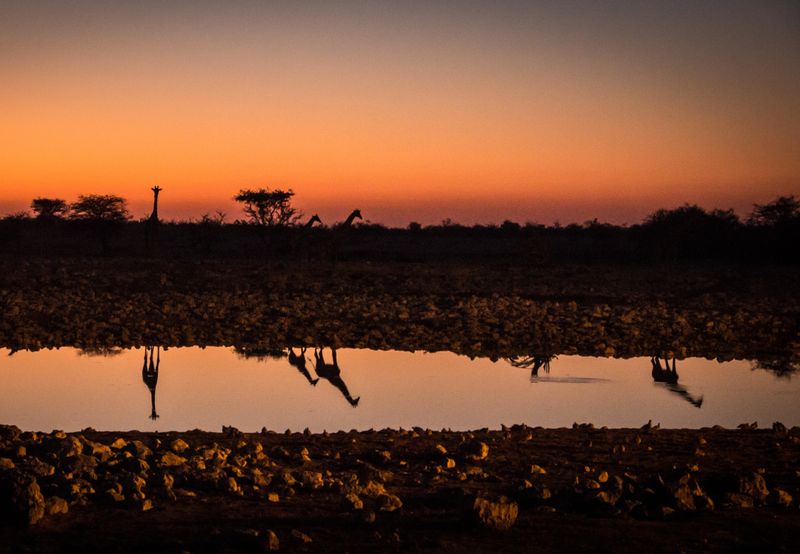 Namibia’s best park for game viewing, Etosha National Park, is famous for the vast Etosha pan as well as its waterholes, the perfect places for animal viewing. You’d also be happy to know that four of the Big Five animals can be seen here along with other endangered species, such as the black rhinoceros.

Though planning a safari in Etosha National Park can be quite daunting, with the information and tips you’ll find here, it will (almost) be a walk in the park.

Read on and check out some useful information on how to get to the park, what to do, where to stay, and what animals you’ll likely spot in this visit-worthy destination!

Where is Etosha National Park?

Etosha National Park is located in northwest Namibia, in the Kunene region.

How to get to Etosha National Park?

Located 435 km / 270 mi north of the capital of Windhoek, Etosha National Park can be reached by road, from two airports.

The recommended point of entry is Hosea Kutako International Airport (WDH), which is the main international airport in Namibia.

It is a hub for Air Namibia which offers flights to various African countries. The airport also receives flights from Europe and the Middle East.

Note that should you decide on a self-drive safari, the estimated drive time from the airport to Etosha National Park is about six hours on paved roads.

The closest domestic airport where you’ll be able to catch flights to Etosha is the Ondangwa Airport (OND). Keep in mind that it only receives flights from two internal destinations (Walvis Bay and Windhoek-Eros).

Most safari packages, however, include the transfer to/from Windhoek’s international airport.

Children under 16 years old are free of charge. 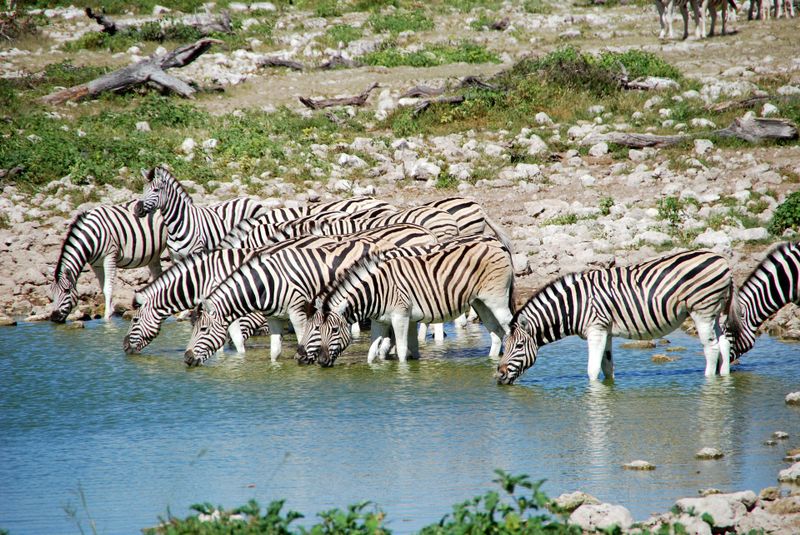 The relatively hot and dry climate of Etosha National Park means that there is a large variation of temperature between the day and night.

The park is open year-round but the wildlife viewing is at its best during the winter months, from July to September. Because of the scarce rain, the animals gather around the few sources of water available, making it easy to spot them.

June and October are also good for wildlife spotting, but the weather can be very hot (average 33°C/91°F during the day) in October.

A bit of Background on Etosha National Park

The Etosha Pan was discovered in 1851 by the European explorers Charles John Andersson and Francis Galton. European trade routes to the East and West of the pan opened up and in the following thirty years, the threat to the animal population continued to increase due to over-enthusiastic European big game hunters.

By 1881, large animals such as lions, elephants, and rhinoceros have been nearly exterminated.

The park was proclaimed a game reserve in 1907 by the Governor of German South West Africa. In 1958, the game reserve became Etosha National Park. At first, the park was spanning a larger area and it wasn’t until 1970 that the present-day park boundary was set.

The proclamation of the game reserve helped some population of animals to recover but unfortunately, that wasn’t the case of Cape buffalos and wild dogs.

Going on a safari in Etosha National Park 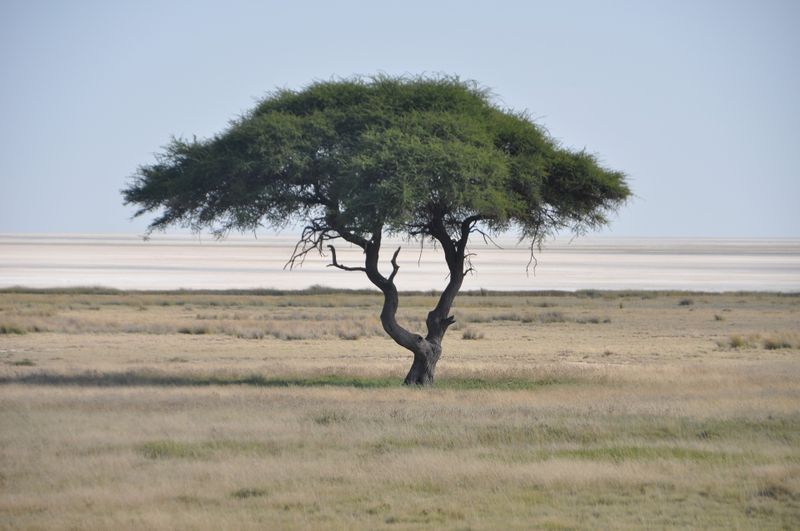 Etosha National Park is Namibia’s best park for wildlife viewing. The most prominent features of the park are the Etosha Pan and the Dolomite Hills. Most of the park, however, consists of savanna woodlands (except for the areas close to the pan).

A depression that covers an area of 5000 sq km / 1900 sq mi, expect to be wowed by the striking landscape of the vast Etosha Pan.

Its hypersaline conditions limit the species that can permanently inhabit the area. The salt pan is dry but it fills up with water briefly in the summer, which attracts flamingos and pelicans.

During the dry season, the animals gather at the waterholes, making it easy to spot them.

Located on the southern border of the park, it is home to a large number of predators. Note that you can only find the mountain zebra in this area, so be sure to be on the lookout for it!

Before embarking on safari in Etosha National Park, here are some rules to keep in mind: 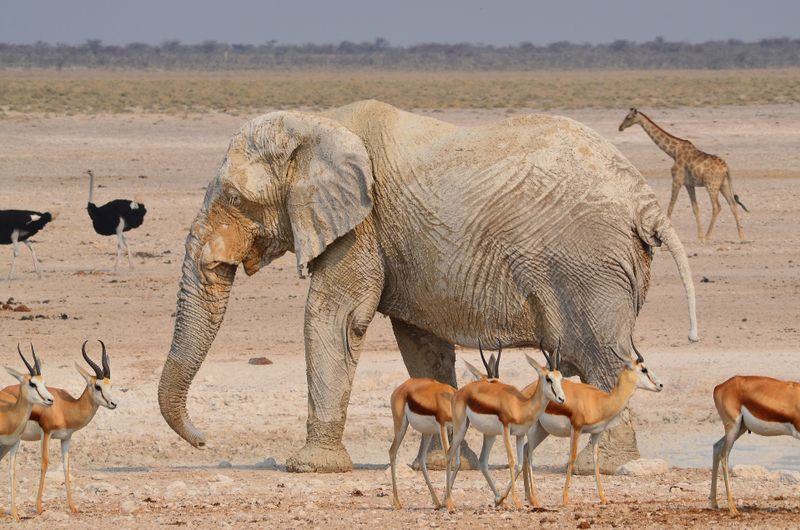 It’s not a secret that the best wildlife viewing in Etosha National Park is at its many waterholes. Especially during the dry season, the animals gather at the permanent water sources.

Etosha is also home to four out of the Big Five animals. As mentioned previously, due to over hunting back in the 1800’s, unfortunately, you won’t be able to find any Cape buffalo here.

If you are looking to catch a glimpse of the herds of elephants and lions, however, you are in luck! You’ll likely to find them easily in the park. It might be harder to spot the elusive leopard, but you may be able to find them hiding in the densely vegetated areas. Springbok and zebra are very common at the Dolomite Camp, as well as their predator, the cheetah, the fastest animal on the planet.

Etosha is well known for its healthy population of black rhinoceros. The waterholes are probably the best place in the world to see them, along with another endangered species, the black-faced impala.

Other large mammals in the park include the giraffe, hyena, kudu, wildebeest, gemsbok, and eland. Here, you will also likely to see many smaller species that are just as fascinating, like the jackal, bat-eared fox, honey badger, warthog, and ground squirrel. 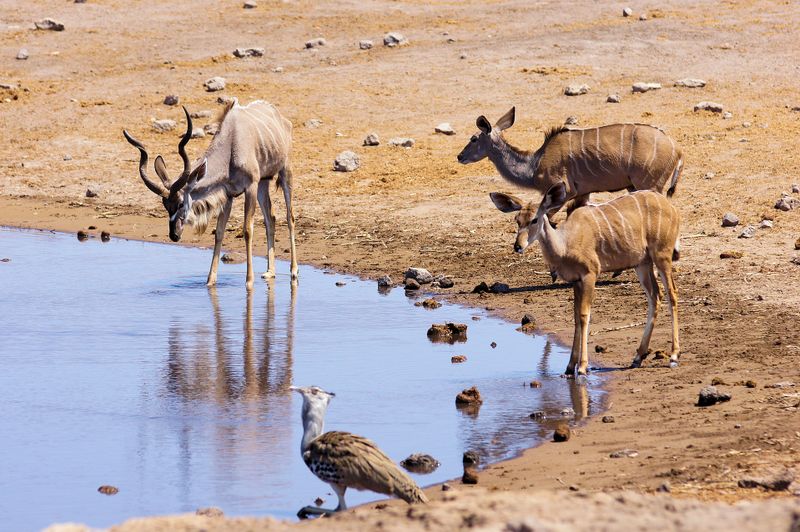 Observing the “nightlife” at Okaukeujo waterhole is what makes Etosha National Park particularly special. The big show begins at dusk when the floodlights are turned on and the waterhole transforms into a stage. You can sit on the benches surrounding the waterhole to observe the wildlife which is seemingly unfazed by the light.

A self-drive safari is a great opportunity to experience everything Etosha has to offer. Here, you may even encounter a Dust Devil, a towering column of dust that whizzes past you as you drive! Thankfully, they are generally harmless.

If you are looking to experience the vastness of the park, jeep safaris are recommended. Depending on the chosen package, you may enjoy two or more days of game drives. They include visits to the famous parts of the park, including the Okaukuejo waterhole and the salt pan.

Before planning your safari in Etosha National Park, make sure to check the entry requirements to visit Namibia. Nationals of all countries need a passport valid at least six months after departure to enter the country.

Citizens of most nationalities do not require a visa to enter Namibia. The nationalities include Australian, Canadian, American, British, and some European Union nationals.

Be sure to check with the embassy or the consulate in your country for the most updated information as visa requirements may change.

Cash withdrawals & use of cards within Etosha National Park

It is possible to pay using credit cards and there are also ATMs available in the park. However, it’s always best not to relay 100% on cash withdrawals on site. It is recommended to exchange some money to local currency (Namib dollar) as soon as you arrive in the country to be safe.

Whenever you plan to go on a safari, make sure to pack the essential items needed, including but not limited to:

Where to stay in Etosha National Park 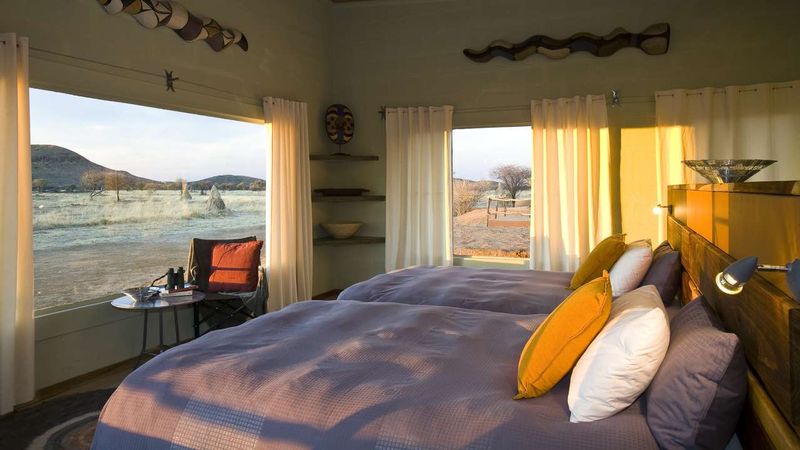 Being one of the most popular parks in Southern Africa, Etosha National Park caters to all kinds of safari lovers and budgets. When you book a safari package, you will have the option of accommodation within the park as well as outside its borders.

If you are planning to stay within the park and visit during the dry season, you’ll be delighted to hear that you can expect a concentration of wildlife around watering holes. This means that you may not even have to leave the camp in order to spot an antelope, zebra, elephant, or even a lion!

There are three main camps inside the park. Their offer various types of accommodation in lodges, as well as in campsites. Within the camps, there are also swimming pools, floodlight waterholes, shops, and petrol stations.

Aside from the private game reserves located on both the east and the south side of the park, there is also a wide range of accommodation located outside the park. From campsites to luxury lodges, there are plenty of choices depending on your budget.

Fascinated by the abundance of wildlife in Etosha National Park? Why not book a safari in Namibia and have yourself a trip of a lifetime.