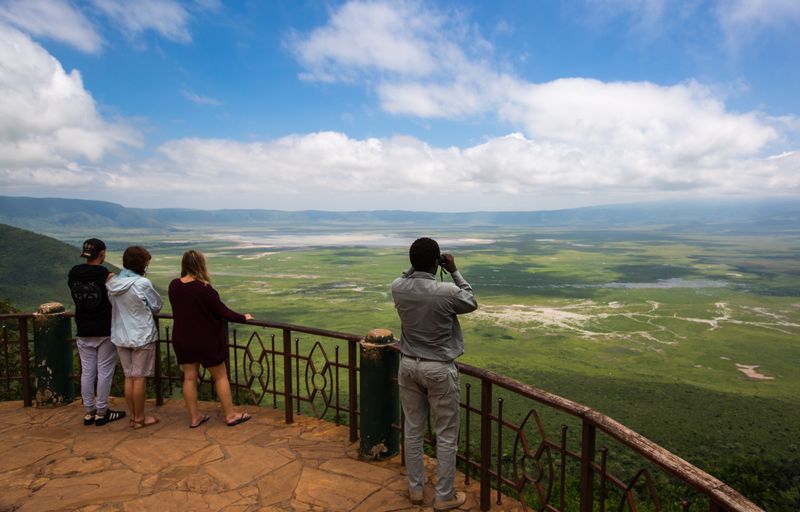 April marks the transition from summer to winter in Africa. And just like everywhere else on the continent, fall comes with downpours and a gradual change from lush to more arid landscape.

South Africa, Botswana, and Zimbabwe are coming towards the end of the rainy season, with shimmering green colors dotting the landscape. It’s a great time for birdwatching but spotting the larger animals will likely be more challenging.

The rain falls almost constantly on the herds of wildebeest crossing Tanzania. However, if you want to witness the Great Migration spectacle from above, now is the perfect time to go on a balloon safari.

That being said, a safari in Africa in April can be lovely, provided you know where to go! Below you will find a list of the national parks that offer great wildlife spotting during this time of the year. 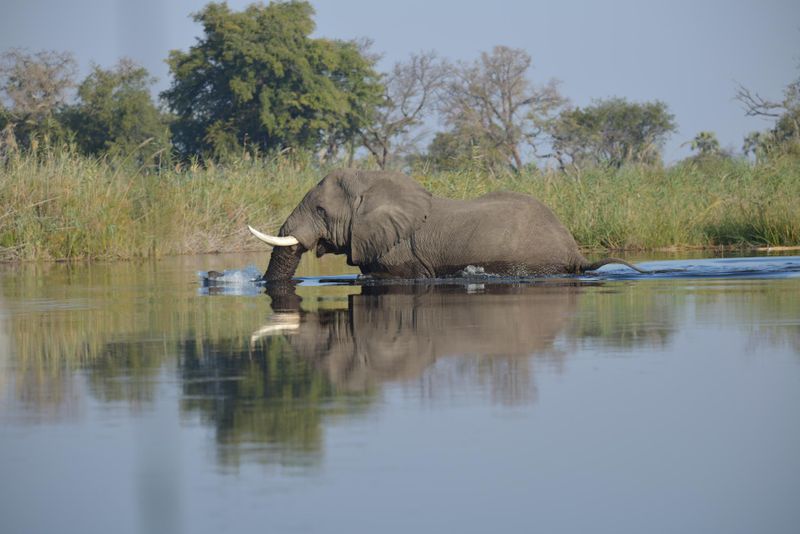 The hot and rainy days of summer are giving way to clear sky and slightly colder nights in Botswana in April.

In the Okavango Delta, the waterways are starting to fill up although they are not yet at peak level.

A UNESCO World Heritage site, the delta is teeming with a variety of wildlife. Migratory birds are about to leave in April, but there are still enough to please twitchers going on a birding tour. As for those who want to spot other animals, the Okavango Delta is home to elephants, giraffes, hippos, buffalos, zebras, wildebeest, lions, lions, leopards, and hyenas.

As it’s not yet the high season in Botswana, you are likely to find affordable accommodation for your stay.

»Are you still unsure why you should visit the delta? Read our article about the Great Reasons to Visit the Okavango Delta! 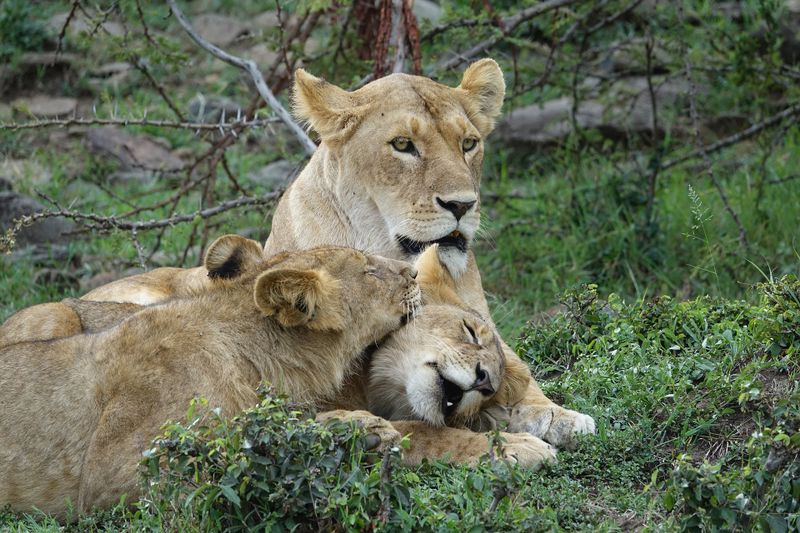 April may be the best time to visit Namibia, especially when it comes to the temperatures. The summer heat is gone, giving way to a more pleasant climate.

The Zambezi Region, formerly known as the Caprivi Strip is, without a doubt, the best place to explore in the country in April. This ultra-narrow strip separates Botswana and Angola and runs west to east to the Zambezi River.

Thanks to still being a rather undiscovered region in Namibia, the lodges and camps are few and far between, adding to the feeling of exploring off the grid. You should be pleased to know that birds and animals are plentiful. And since most of the camps are unfenced, you’ll enjoy being one with nature.

Elephants, giraffes, hippos, and zebras are abundant. You may occasionally spot buffalos, wildebeest, and lions. Note that wild dogs and leopards are very rarely spotted here. 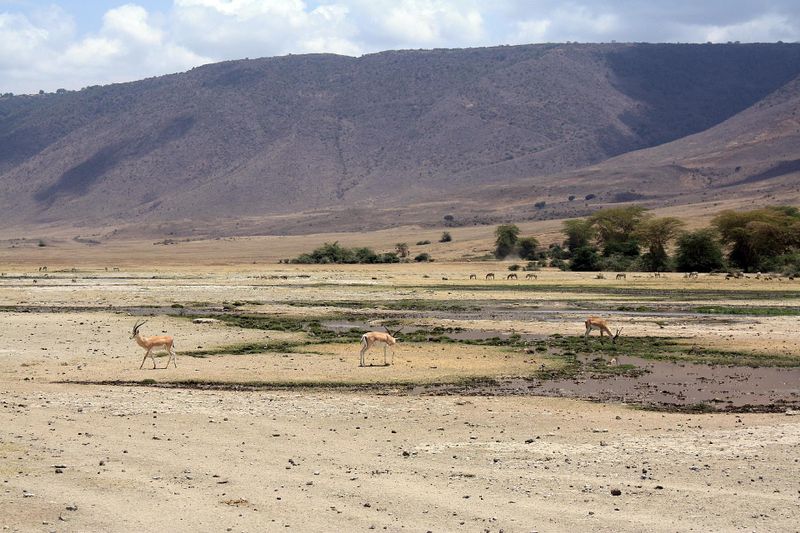 April falls during the (long) rainy season in Tanzania. And although this doesn’t sound like the best time to visit, you’d be surprised to know that hot air balloon safaris in Tanzania offer the best experiences during this time of the year. And the game viewing is still superb.

But instead of going to Serengeti, we recommend heading straight to Ngorongoro Crater. The conservation area offers superb wildlife viewing year-round. But April is part of the low season which means you’d be able to save some money on travel.

The crater is home to all of the Big Five animals and also offers some of the best cultural interactions in Africa.

From here, you can easily also add a day or two in the Serengeti if you want to witness the Great Migration (whether you do this from eye level or the air). By the way, you can go on a balloon ride both in Serengeti and Ngorongoro Crater! 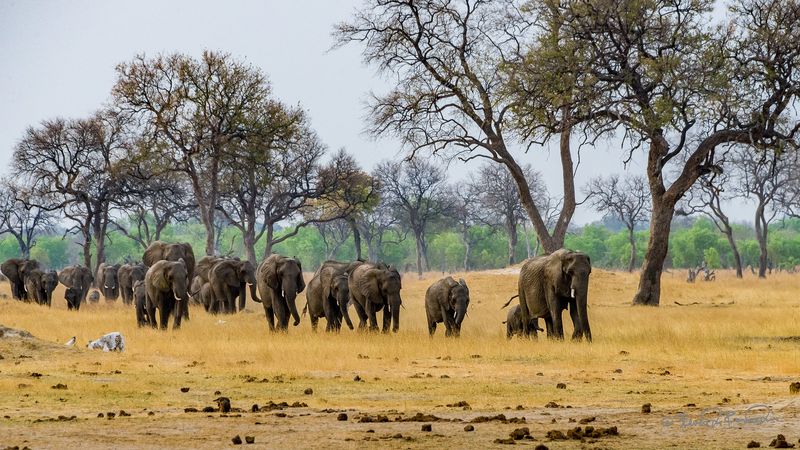 Hwange National Park, Zimbabwe’s largest national park, is at its most beautiful in April. It is also close to the famous Victoria Falls, which you can explore via a light aircraft flight!

With the vegetation and greenery slowly fading, the wildlife begins to congregate around the waterholes, which makes it easier to spot them.

The park is home to more than 100 animal species and 400 bird species. All of the Big Five animals are present, although the rhinos are rare. You should also know that the elephant population is one of the largest in the world! Giraffes, hippos, buffalos, zebras, wildebeest, and hyenas can also be spotted in the park. 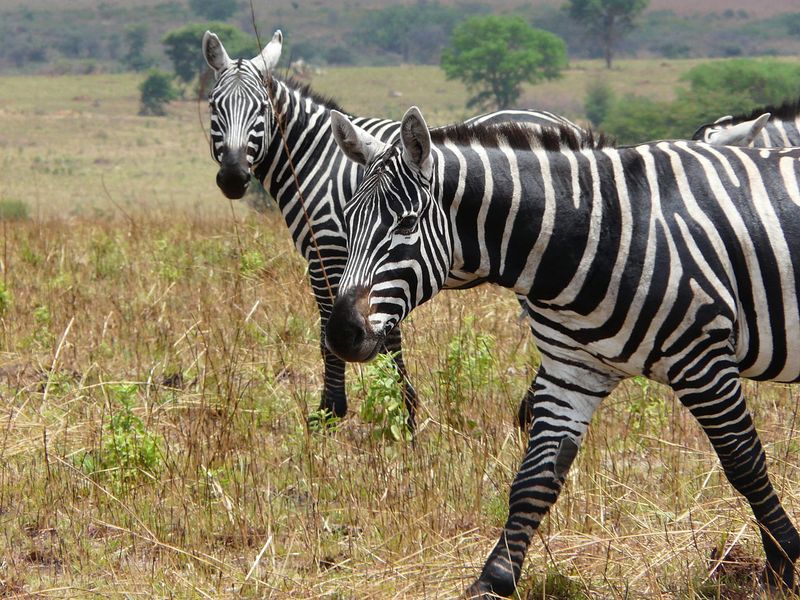 Uganda is now in the middle of the rainy season. Yes, it is possible to go gorilla trekking, but the weather will make for a less desirable experience. Nevertheless, the primates are easier to spot now as they don’t venture into the forest that much.

However, April is a great month to consider Kidepo Valley National Park. The temperatures drop and this semi-arid savannah looks great with the patches of green. The animals spread out a bit more when it rains, but the wildlife can still be spotted.

The park is particularly rich in predators, so expect to catch a glimpse of lions, cheetahs, and hyenas. Elephants, buffalos, and zebras are abundant, and you can occasionally spot some giraffes, too.

Let yourself be mesmerized by the lush landscape of the Green Season by going on a Balloon Safari in Africa!