Bridging Asia and Australia at the crossroads of the Pacific and Indian oceans lies Indonesia, the home to some of the world’s most unique wildlife.

The Indonesian archipelago is comprised of 17,508 islands, around 1,000 of which are still uninhabited. Protected by the untamed jungles and untouched by the outside world, Indonesian fauna has evolved to the incredible variety of unique and diverse species. While Indonesia only takes up 1.3% of the world’s land, it is home to 17%(!) of the world’s wildlife.

From stunning birds to deadly yet fascinating predators, here’s a list of animals you need to be on the lookout for during your wildlife tour in Indonesia.

Things to Know Before You Go: Wallace Line

In 1859, British naturalist Alfred Wallace discovered a boundary between the islands of Bali and Lombok, going to the north between Sulawesi and Borneo. This line marks the juncture of Australian and Asian continental plates which explains the striking difference in wildlife on the neighboring islands.

With that being said, here are some of the most interesting animals you may encounter in these regions. 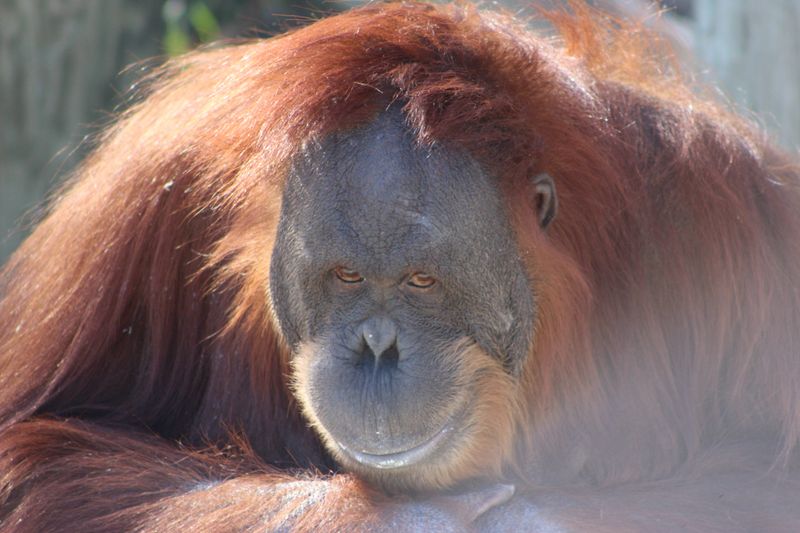 The Sumatran Orangutan is native to the tropical rainforests in Borneo and Sumatra. Unfortunately, these adorable creatures are endangered because of an extensive habitat loss. 80% of their habitat area has been lost in less than 20 years.

Its name translates as ‘forest man’ which perfectly fits their human-like manners and friendly nature. These lovely primates with frizzy reddish fur and deep dark eyes are always crowd favorites, and you just might fall in love with them as well! 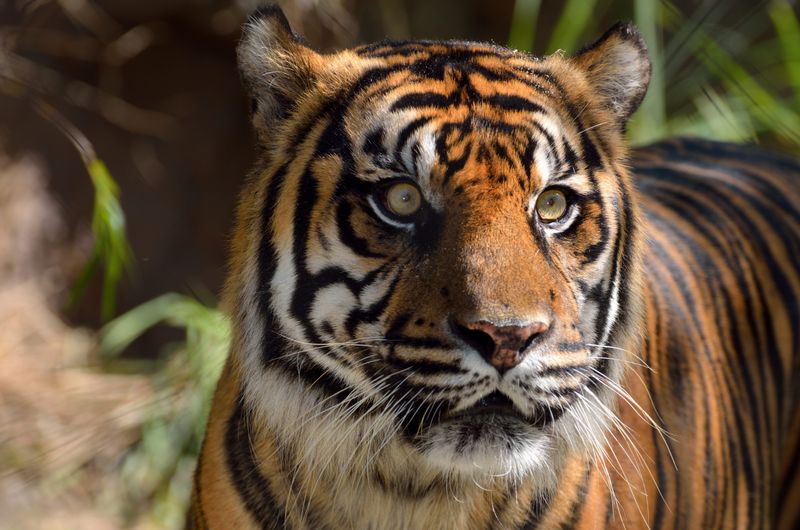 The Sumatran tigers can be distinguished from their sibling subspecies by their bright orange to reddish-brown fur that creates a stunning contrast with their thick black stripes.

Weighing in at around 220lbs (100kg) (about the weight of a large adult male human), they are the smallest type of tigers in the world. Recent research suggests that their smaller size had been critical to their survival. As their bodies require less energy, they were able to survive on the smaller prey commonly found in Indonesia such as a wild pig or a small deer.

Unfortunately, this tiger breed is one of the species that could become extinct by 2050 due to the massive forest destructions and illegal wildlife trade. Today, there are around 400 Sumatran tigers left in their habitat out of 3,500 free-ranging tigers remaining in the world, making them an endangered species.

This amazing species can be found in deep forests and national parks in Sumatra and Bali. 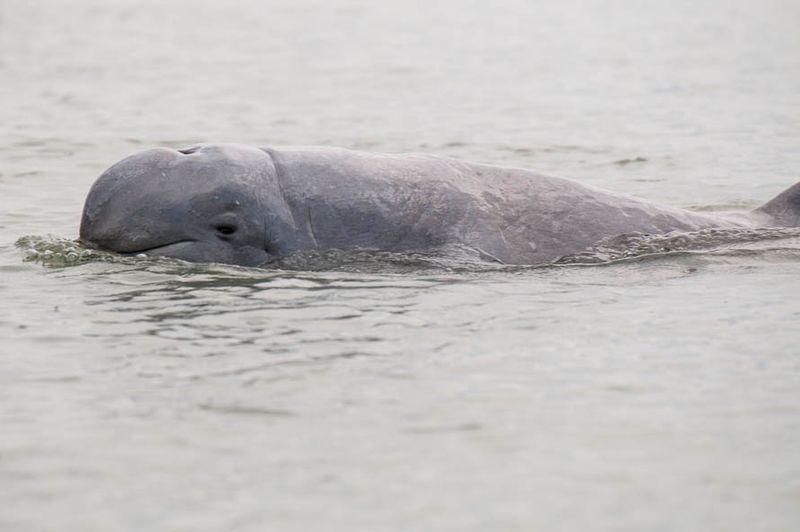 Mahakam dolphins or freshwater dolphins are the only kind of water mammals that live in tropical rivers. This species joins the ranks of the shark and the sea turtle as one of the oldest animals on Earth.

You’d be interested to know that these lovely creatures are considered sacred in Khmer and Laos.

Mahakams can be found in many river estuaries in Kalimantan, in the District of Kota Bangun or Kutai Kartanegara. Unfortunately, today Makaham dolphins are close to extinction due to fisheries bycatch and habitat loss. There are only about 80 individuals of Mahakam Dolphins left in the wild. 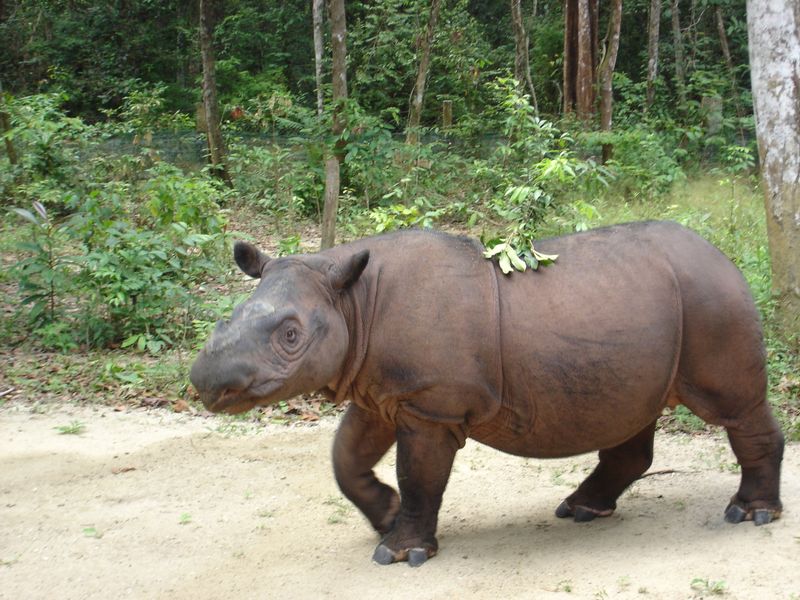 The Sumatran rhinoceros is the only Asian rhino type which has two horns. It’s the smallest species of rhinos known in the world with thick leathery skin and rounded unwrinkled muzzle.

In the past, they could be found roaming freely in India, Bangladesh, Bhutan, Southern China, and South-east Asia.

Today, there are about 30 to 100 individuals of these precious mammals left in the world. They have been endangered by poaching, habitat loss, isolation, inability to reproduce, and scattered population.

Although disproved by the research, some people still believe their horns have unique medicinal properties including curing a hangover or being used as an aphrodisiac. Such unfortunate and false beliefs make these animals a popular target for illegal hunters. 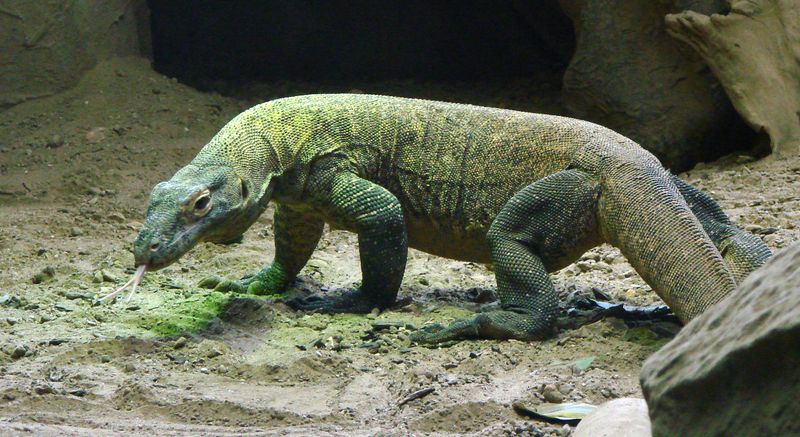 The Komodo Dragon is the largest living lizard in the world which grows to the maximum length of 10ft (3m) and reaches the weight of 150lb (70kg). It’s the most ancient species living today which is often cited as the closest relative to dinosaurs.

These fearsome lizards come in a variety of colors, including blue, orange, green, and gray. Their rough skin is reinforced with osteoderms, bony plates that serve as defensive armor.

This animal is an extremely dangerous predator thanks to their massive size, deadly venomous saliva, sharp teeth, claws, and powerful body. As fierce hunters, they feed of large prey including water buffalo, deer, carrion, pigs, and sometimes even their own!

Don’t worry though, observing these carnivores in their natural habitat is not dangerous as an experienced park ranger will make sure that you’re safe.

Illegal hunting, wildfires, and food shortage caused diminishing of Komodo Dragons’ population. Currently, there are around 3000-5000 of these large lizards in the world.

In order to preserve these fantastic creatures, the Indonesian government has established the Komodo National Park in Flores which is one of the main spots to see them. These predators can also be typically found at the islands of Komodo, Rinca, and Gilli Motang. 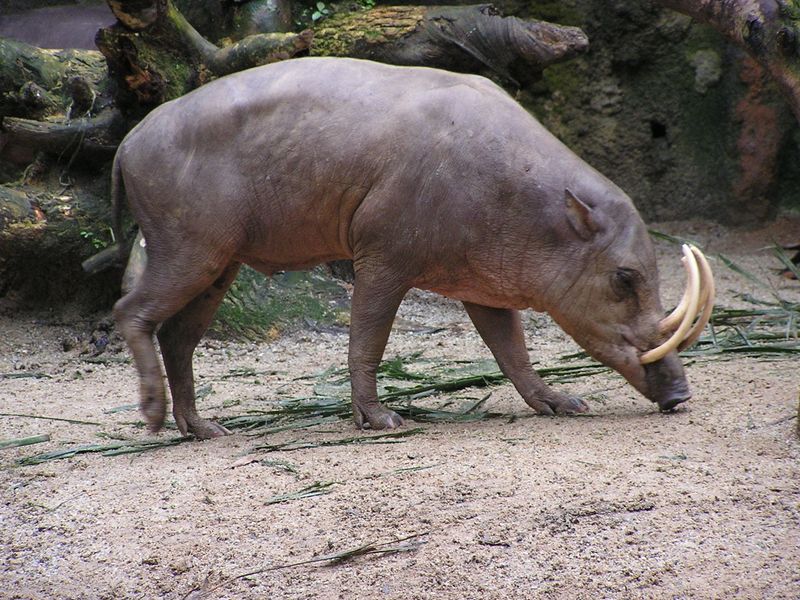 Babirusa’s name translates as ‘pig-deer’ which is the one precise way to describe these fascinating animals.

They look almost like ordinary pigs except with deer’s legs and long curly tusks which reach up to 17 inches (43 cm) and can actually grow back into their skull. The purpose of these savage tusks in babirusas is still a mystery for scientists. It is likely that they serve strictly for display purposes, but this hasn’t been proven.

While babirusas do have a close resemblance to other pigs, their physiology is so different that scientists believe that they branched off from the rest of the pig family very early in evolution.

Despite their somewhat ‘scary’ appearance, these wild bores are shy and avoid humans. They eat mainly leaves, fruits, berries, nuts, mushrooms, bark, insects, and smaller mammals (sometimes even smaller babies of their own species!).

You can spot Babirusas in North Sulawesi and some of the neighboring islands. 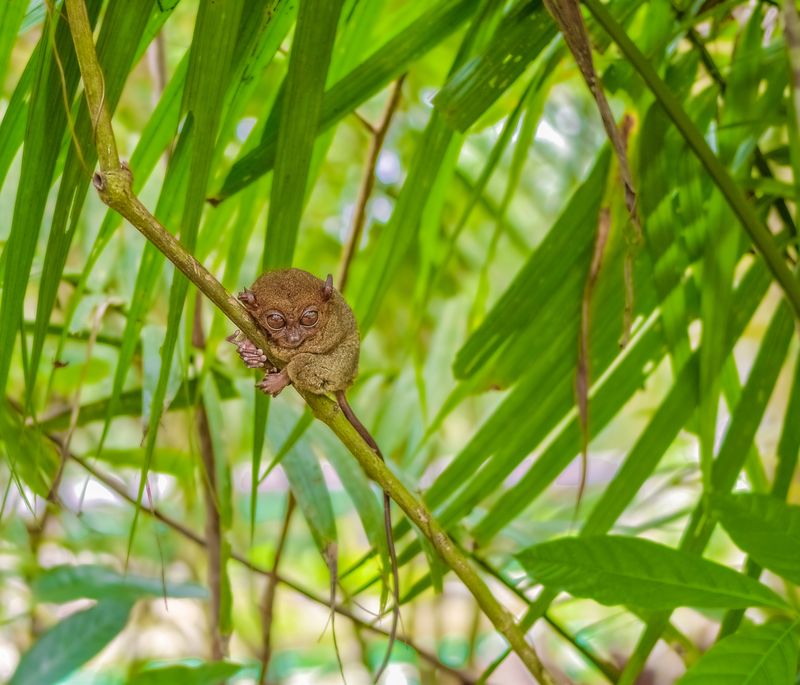 Tarsius Tarsier is the smallest primate species in the world. This cute animal could easily fit in the palm of your hand.

Tarsius have a brown-reddish soft fur, large eyes that take up most of their skull, and well-distinguished pair of ears. As nocturnal animals, these features help them to easily locate their prey at night.

This species feeds off small insects which they catch by jumping. As skillful jumpers, they can easily leap 40 times the length of their body and can even catch a bird in flight.

These lovable animals are very sociable, they often engage in play behavior, snuggling, all grooming, and food sharing. They are also extremely faithful and will only have one mating partner throughout their lifespan even if their beloved dies.

Tarsius Tarsier can only be found in the forest in Sulawesi, Pulau Peleng, and Pulau Selajar.

The Helmeted hornbills are arguably the most extraordinary and charismatic forest birds. These large birds with iconic bright helmet, prominent beak and long feather tail make a stunning impression!

What’s even more striking is this bird’s shrieking arresting call which can sound like hysterical laughter and can be heard from two kilometers away.

In West Kalimantan and Borneo, this bird plays an important cultural role. It is celebrated as a symbol of divine realms and is often displayed in traditional arts and carvings. They are also an official symbol of the province of West Kalimantan.

The Helmeted hornbills prefer lowland tropical rainforests with an abundance of fruiting trees. Spotting one of these amazing birds today becomes more difficult as their number has decreased in recent years. 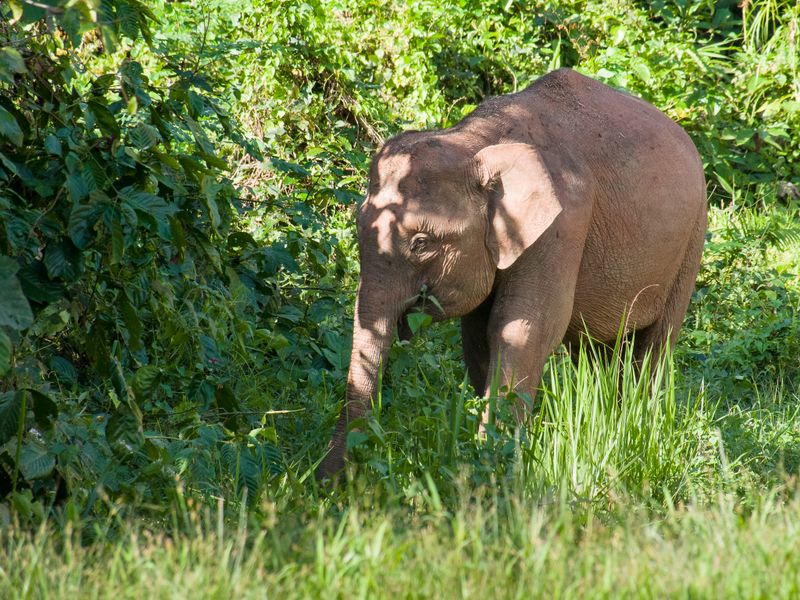 Borneo elephants are the pygmy elephant species that inhabit rainforest in the northern part of the island. These small elephants have baby-like face features, cute oversized ears, chubby bellies, and long tails that they’re dragging around while walking.

In general, they’re more playful and friendly than other elephant species. Currently, the elephants of Borneo are the smallest in Asia.

Scientists believe that this species is the ancestors of the private herd that belonged to the Sultan of Sulu (a former Muslim state in North Borneo). This isolated, domesticate origin might explain the genetical differences, smaller size, and gentle nature of these elephants. Yet, they remain the least-studied and least-understood elephants on Earth.

Due to shrinking forests and illegal gaming, Borneo Elephants are unfortunately also listed as endangered. 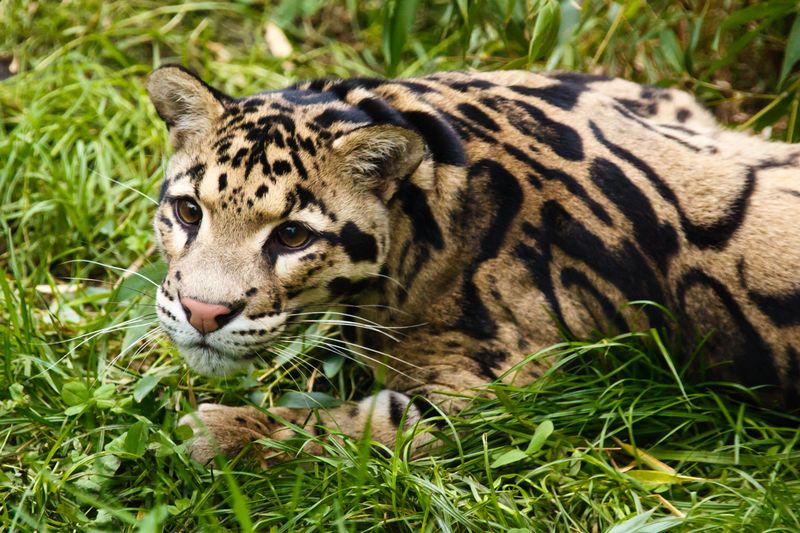 These mysterious and rare wild cat species are named after the large cloud-shaped spots that cover their entire body. They are natural climbers who spend most of their time in the lush tropical forests.

Sunda leopards can be found in Borneo and Sumatra, although it is not known how many individuals of this species are living today.

The clouded leopards are very cryptic in nature, and they are one of the least studied and understood wild cats. Who knows, during your wildlife trip, not only will you encounter them, you may just discover some scientifically important facts about them!

Looking to explore the amazing Indonesian wildlife? Get up close and personal with them during a walking wildlife tour in Indonesia.

Maryna is a contributing writer at BookAllSafaris.com. She's a passionate traveler who is mesmerized by the wonders of Mother Nature.