Wildlife Tours in Madagascar: A Guide to Some of the World’s Rarest Species Animations enthusiasts surely remember the hilarious comedy Madagascar (2005) that follows the story of four animals from New York’s Central Park Zoo who unexpectedly end up on the island of Madagascar.

There, Alex the lion, Marty the zebra, Melman the giraffe, and Gloria the hippopotamus attempt to navigate life on the island and find friendship with some of its inhabitants.

While much is known about the classic African safari animals, including lions, zebras, giraffes, and hippopotamuses, smaller animals such as those found on Madagascar have gained lesser exposure and, as a result, little to nothing is known about them.

The island has been isolated for over 70 million years, most of Madagascar’s plant and animal species are endemic to the area and found nowhere else in the world.

To give you an idea of what animals you may spot on a wildlife tour in Madagascar, here are some unique species that call this island their home! 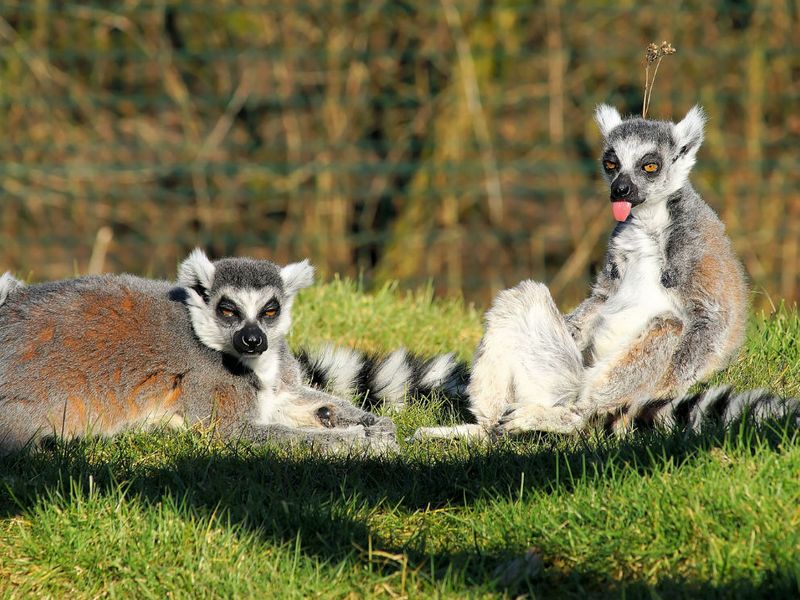 Very few people are aware that King Julien on Madagascar belonged to the ring-tailed lemur species that is found mostly in Madagascar and a few neighboring small islands.

These stunning primates are hard to miss because of their long black and white striped tail.

Unlike King Julien in Madagascar, a dominant female lemur emerges at the very top of the group’s hierarchy.

Unfortunately, it is estimated that only over 2,000 individuals still survive in the wild in Madagascar. You are likely to spot them in Isalo National Park. 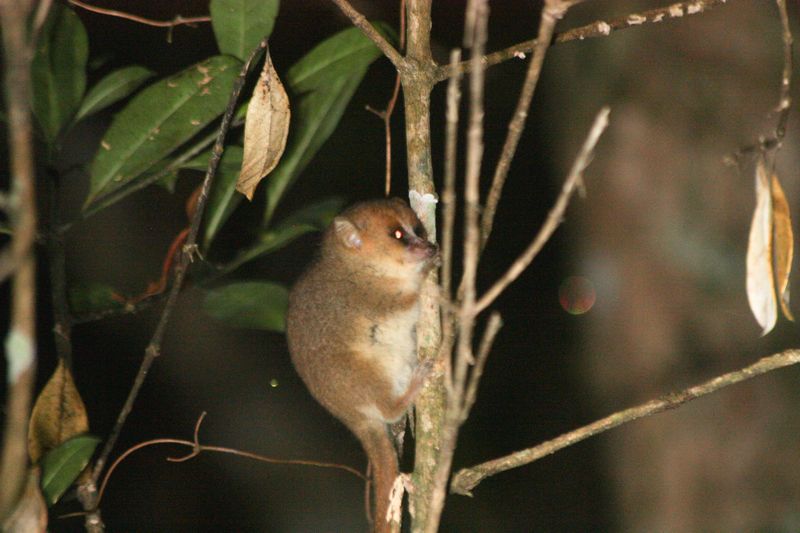 In real life, very little is known about Goodman’s mouse as the species was only discovered in 2005. Goodman’s mouse lemur has been found in Mantadia National Park and Analamazaotra Special Reserve. It is not known to be found anywhere else in Madagascar.

This tiny primate, only a little bigger than a big mouse, has short, dense fur with small ears and long tail used to store fat.

Goodman’s mouse lemurs are believed to live up to 5 years in the wild and feed on fruits and small insects. 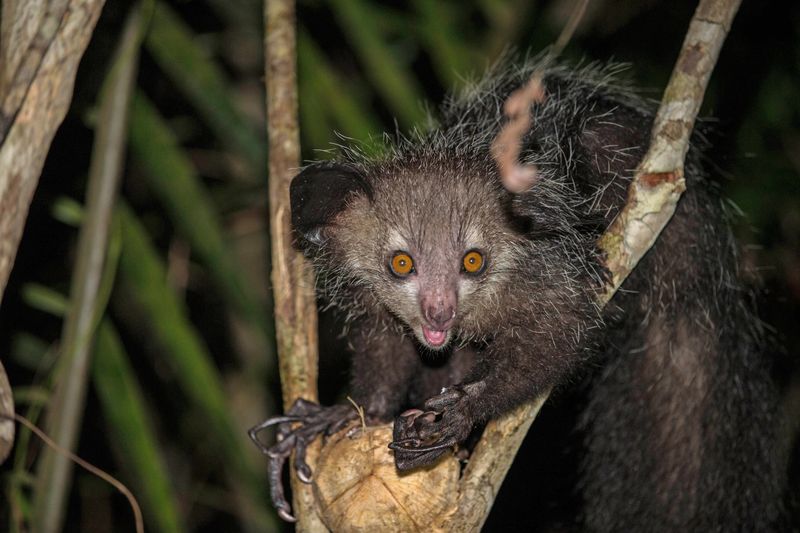 King Julien’s trusted advisor named Maurice is an aye-aye, a primate species endemic to the island of Madagascar.

Aye-ayes are usually dark brown or black and feature big eyes, slender fingers, and extremely sensitive ears. Aye-ayes live on trees and depend on their pointed claws to dangle from branches. These nocturnal creatures feed on insects and fruits.

They use echolocation to find prey – tapping on trees to listen for wood-boring insect larvae that move under the bark.

Wild aye-ayes are solitary animals, spending most of their lives alone except during courtship and when a baby aye-aye is still dependent on its mother.

Like the ring-tailed lemur, the female aye-aye bears dominance of its male counterparts, allowing them first access over food.

Due to its largely bizarre appearance, with extremely large ears and a long skeletal-like middle finger, Aye-ayes are considered as a symbol of bad luck by a few native tribes in Madagascar, which has led to them being killed on sight.

Today, aye-ayes are a protected species by law, but their decline is still at a worrying rate due to massive habitat loss. You may be able to spot aye-ayes in the wild on Aye-Aye Island and in the Loky-Manambato protected area in the small village of Daraina. 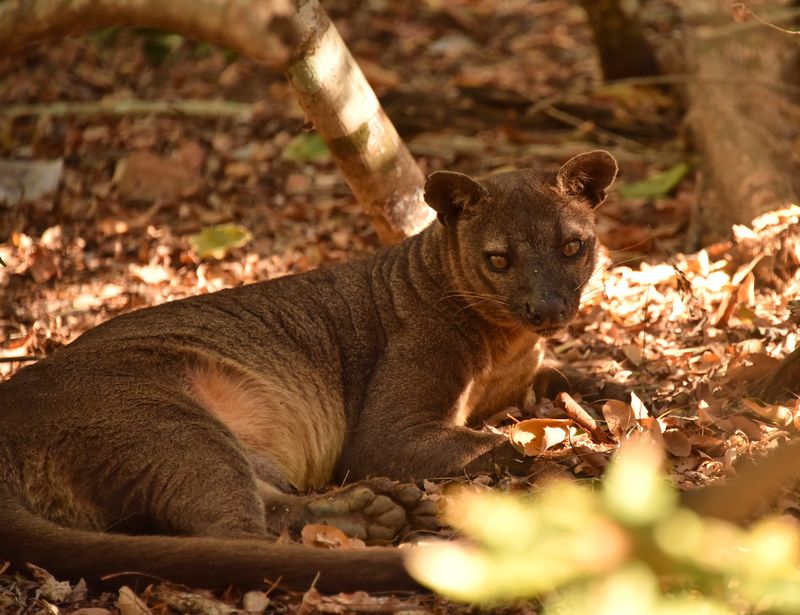 The largest carnivore and top predator living in the forests of Madagascar is none other than the fossa.

At first glance, the fossa looks like a cross between a mongoose and a cat, which has made its classification controversial. While its physical characteristics resemble that of cats, its other traits bear more similarity to civet species.

The fossa is an elusive and solitary creature that spends time on trees and ground. Fossas hunt both during the day and night and lemurs are its prey of choice.

Like cats, the fossas are agile climbers, frequently using their retractable claws and flexible ankle joints to maneuver up trees and branches. The fossa’s long tail, which is as long as its body, helps the animal balance and move along tree branches.

Curious travelers may be able to catch a glimpse of fossas in the Kirindy Mitea National Park. 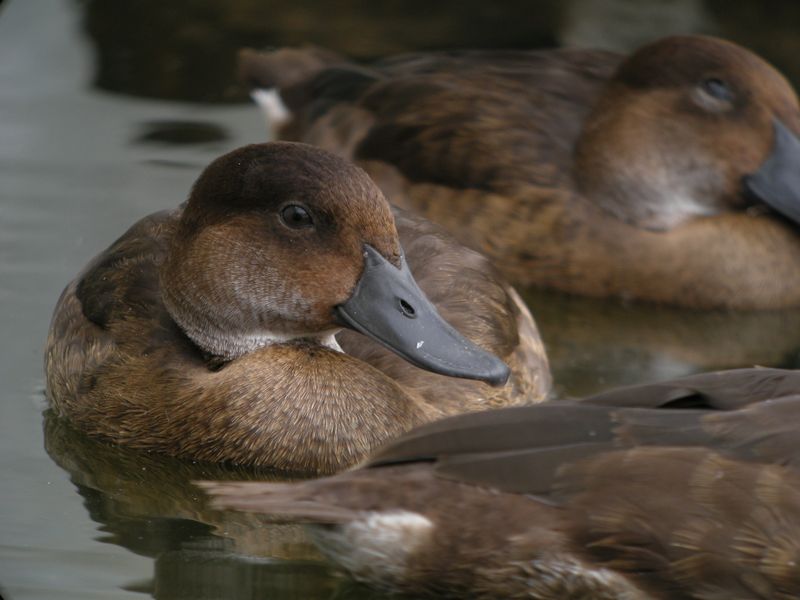 The Madagascar pochard is considered the rarest duck in the world, with a total population of less than 100. The ducks are so rare that only an estimated 25 individual birds now remain in the wild and can only be found in one wetland north-east of Madagascar near Bemanevika.

The species was thought to be extinct until it was re-discovered in 2006. They are medium-sized ducks, known to exhibit attractive reddish-brown flank, white belly, and greyish beak.

The decline of the pochards has largely been due to the environmental changes of Lake Alaotra, where it used to live. These changes include conversion of land to agriculture, pollution and deforestation.

The introduction of new species to the area has caused competition, decreasing food supply for the ducks. Conservation projects are underway to help save these rare ducks from extinction. 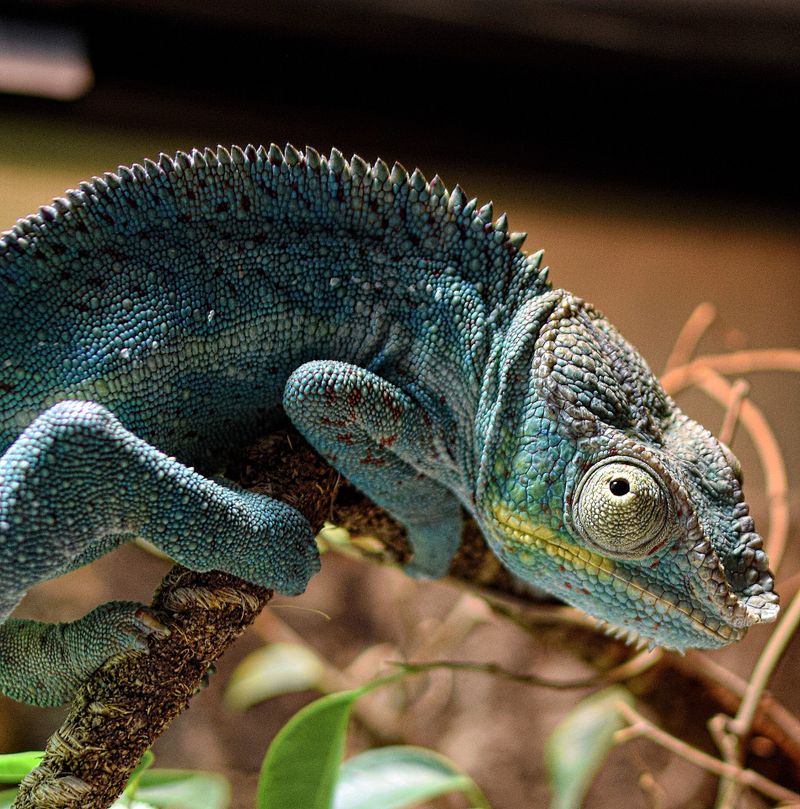 Their color varies depending upon their habitat. Male chameleons have blue-green, emerald-green or turquoise bodies. Whereas females usually have dull grey, brown or faint green color. When they are breeding, the colors change to pale or vivid orange to pink. The color patterns change again when they are expecting, turning into black with orange bars.

Thanks to its excellent vision – the eyes can move independently – they are excellently skilled to catch prey. Once they identified the prey, they use their long, sticky tongues to catch the insects. 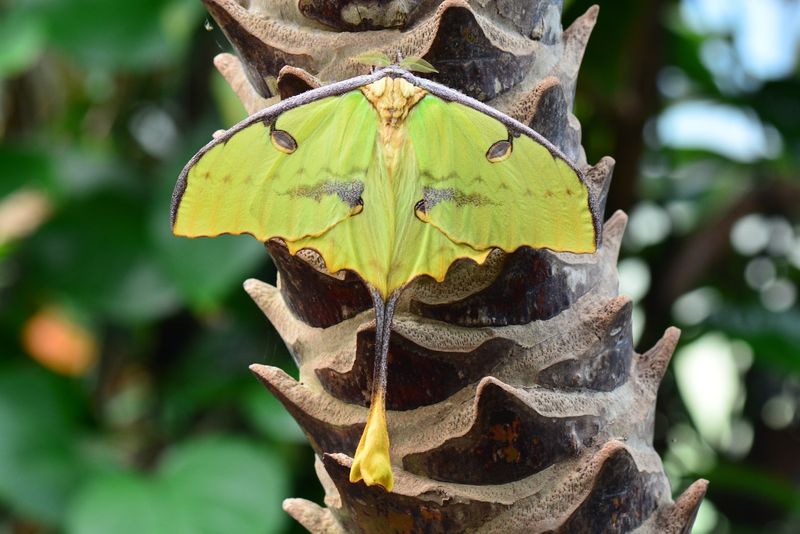 The comet moth, or the Madagascan moon moth, is native to the rainforests of Madagascar.

It is one of the world’s largest silk moths, with a tail spanning 15cm/6in. The male’s wingspan is 20cm/7.9in.

Sporting a bright yellow color, these insects are nocturnal.

Once they emerge from the cocoons, they cannot feed on plants to survive. As they have no way to take energy, the comet moths can only live for six to eight days.

Deforestation is causing the numbers of comet moth to dwindle but there’s no exact information on how many of them are left in the wild.

Fancy a stroll into nature after the sun sets? Go on a nocturnal animal safari in Madagascar!