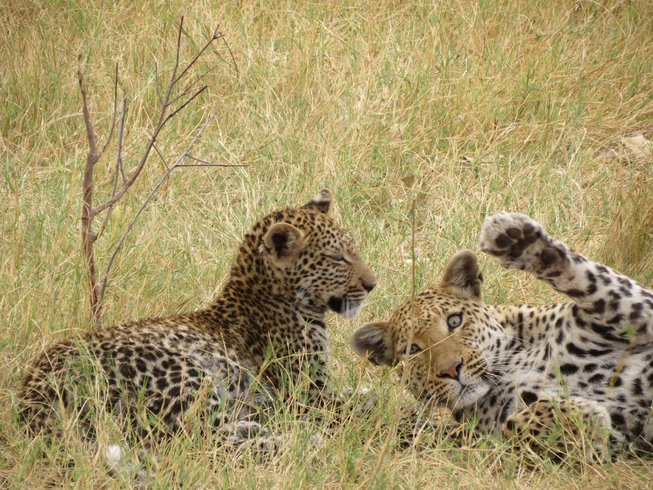 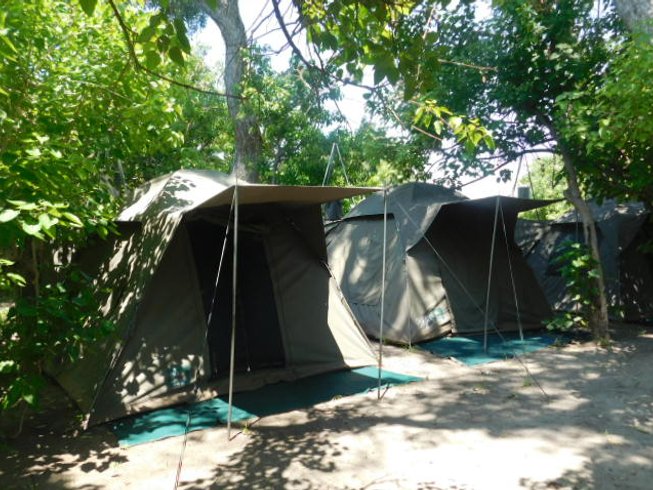 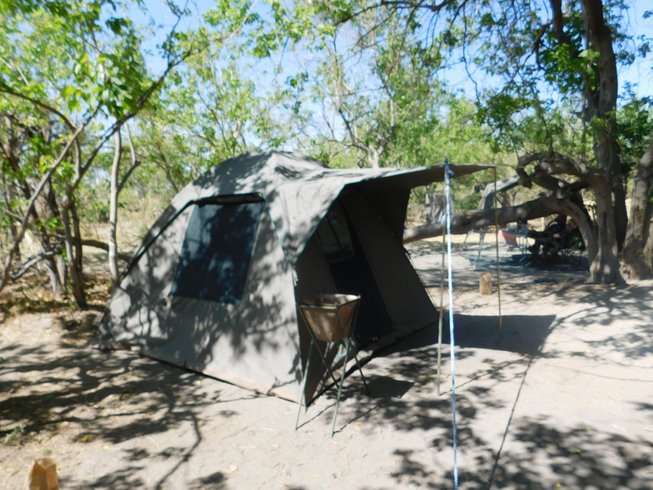 Login to save to your favorites
“Enjoy the adventurous safari in Botswana!”
​
Photo
all media

Join Shipungo Safari & Tours for this thrilling safari in Botswana. You could have an amazing experience of the safari in the natural habitat of the animals. Okavango Delta is the most beautiful and varied reserve in Africa, with an unsurpassed beauty and compelling mix of wildlife and where an abundance of a game can be seen. This is the ideal opportunity to spot crocodile and hippo and many other species, then you could venture through Moremi Game Reserve to Chobe National Park where the safari will end.

You will be accommodated in a mobile tented camp which has a bedroll, external toilets, and external shower.

Depart from Maun to spend two days Mokoro excursion and game walks in the Okavango Delta, which is a 45-minute drive to mokoro station.

Upon your arrival, Shipungo Safari & Tours will set up the camp, in the afternoon, your guide will take you for short guided walk to see the abundance of birdlife, game, and nature of the Delta. Then return back to camp for dinner.

Wake up in the morning to have coffee / tea, then, after breakfast, the guide will lead for a game walk to experience Okavango Delta by foot and spotting wild animal far from you. Return back to the camp for lunch, while Shipungo Safari & Tours will break down the camp, then return to mokoro station where you will be picked by either vehicle / boat back to Maun to spend a night in Maun.

In the morning after breakfast, you will leave one of the lodges in Maun at around 10 o’clock in the morning to spend two days in Khwai. Upon your arrival, Shipungo Safari & Tours will set up your tent accompanied by camp hand while the chef is preparing something for you before afternoon game drive for about three-hour duration. At the end, return to the camp where dinner is served.

After breakfast, you will take down your camp then head to Savuti where you will spend three days in a desert-like landscape of Savuti and onto the lush Chobe floodplains.

Upon your arrival, you will set up your camp, you will be given two to three hours to rest, before the game drive in Savuti as is well known for the big five sightings, being the lion, leopard, buffalo, rhino, and the elephant. At the end of the day, return to the camp where dinner is served.

In the morning after breakfast, you will be boarded on a game viewer vehicle for a morning game drive and explore more about Savuti and its environment. Return back to the camp for lunch, before afternoon game drive. At the end of the day, return to the camp for dinner.

Morning after breakfast, you will be boarded on a game viewer vehicle for morning games drives on day six along the Chobe waterfront finishing off with a three-hour boat cruise on the Chobe river. The safari ends after the boat cruise.

The safari will be held in Okavango Delta, Maun, Khwai, and Savuti, Botswana.

The Okavango Delta is a large low gradient alluvial fan or ‘Inland Delta’ located in north-western Botswana. The area includes permanent swamps which cover approximately 600,000 hectares along with up to 1.2 million hectares of seasonally flooded grassland. The inscribed world heritage property encompasses an area of 2,023,590 hectares with a buffer zone of 2,286,630 hectares. The Okavango Delta is one of a very few large inland delta systems without an outlet to the sea, known as an endorheic delta, its waters drain instead of into the desert sands of the Kalahari Basin. It is Africa’s third largest alluvial fan and the continent’s largest endorheic delta. Furthermore, it is in a nearly pristine state being a largely untransformed wetland system. The biota has uniquely adapted their growth and reproductive behavior, particularly the flooded grassland biota, to be timed with the arrival of floodwater in the dry, winter season of Botswana.

Whether arriving by air or road, the first glimpse of the river, deep and dazzling in the sandy terrain, is always breathtaking. It appears as a swathe of brilliant, peacock blue ribbon, winding its way through the tiny town of Kasane, and ensuing wilderness which is the Chobe National Park.

Undoubtedly one of Africa’s most beautiful rivers, the Chobe supports a diversity and concentration of wildlife unparalleled anywhere else in the country. Established in 1968, the park covers approximately 11,700 square kilometers, encompassing floodplains, swamps, and woodland. The Chobe River forms its northern boundary. There are four distinct geographical areas in the park: the Chobe Riverfront, the Ngwezumba pans, Savuté, and Linyanti.

The most accessible and frequently visited of Botswana’s big game country, the Chobe Riverfront is most famous for its large herds of elephants and cape buffalo, which during the dry winter months converge upon the river to drink.

During this season, on an afternoon game drive, you may see hundreds of elephants at one time. You may be surrounded by elephants, as the main Serondella road becomes impassable and scores of family herds cross the main road to make their way to the river to drink, bathe, and play.

Driving the loops that hug the river’s edge, you may see up to 15 different species of animals on any one game drive, including waterbuck, lechwe, puku (this is the only part of Botswana where they can be seen), giraffe, kudu, roan and sable, impala, warthog, bushbuck, monkeys, and baboons, along with the accompanying predators lion, leopard, hyena, and jackal.

Take a river cruise and you’ll experience the park, and the animals, from another vantage point. Here, you’ll get up close and personal with hippo, crocodile, and a mind-boggling array of water birds.

Over 460 bird species have been recorded in the park, making it one of Africa’s premier venues for bird safaris. Common species to be seen include the sacred ibis, Egyptian geese, the ubiquitous cormorants and darters, spur-winged geese, Pel's fishing owl, Carmine bee-eaters, most members of the kingfisher family, all the rollers, the unmistakable fish eagle, the martial eagle, and many members of the stork family.

The Chobe River rises in the northern Angolan highlands, travels enormous distances before it reaches Botswana at Ngoma. Like the Okavango and Zambezi rivers, the Chobe’s course is affected by fault lines that are extensions of the Great Rift Valley. These three mighty rivers carry more water than all other rivers in Southern Africa.

The Ngwezumba pans lie approximately 70 kilometers south of the Chobe River and comprise a large complex of clay pans, surrounded by mopane woodlands and grassland plains. During the rainy season, the pans filled with water, then attracting wildlife that moves away from the permanent water sources of the Linyanti and Chobe Rivers.

During the dry winter months, game viewing at the permanent waters of the Linyanti can be excellent. The area that falls within the Chobe National Park, which has a public campsite, is sandwiched between photographic concessions to the west and hunting concessions to the east.

Truly at the interior of the park, Savuté boasts most of the Chobe species, except for water-loving antelope. It is best known for its predators, particularly lion, cheetah, and hyena, in which there are large resident populations.

The Savuté channel flows from the Linyanti River for about 100 kilometers, carrying water away from the river and releasing it into a vast swampland called the Savuté Marsh, and further south onto the Mababe Depression, which is also fed by the Ngwezumba River from the northeast. The Mababe, immense and flat and fringed by thickets of trees, was once part of the Makgadikgadi super-lake. When filled with water, it becomes the venue for thousands of migratory birds and animals, particularly large herds of zebra.

Geographically, Savuté is an area of many curiosities. One of its greatest mysteries is the Savuté channel itself, which has over the past 100 years inexplicably dried up and recommenced its flow several times. This irregular water flow explains the numerous dead trees that line the channel, for they have germinated and grown when the channel was dry and drowned when the channel flowed again.

This gem of a national park has garnered a number of important distinctions. In 2008, it was voted the ‘best game reserve in Africa’ by the prestigious African Travel and Tourism Association at South Africa’s premier tourism fair, Indaba. It is the first reserve in Africa that was established by local residents. Concerned about the rapid depletion of wildlife in their ancestral lands, due to uncontrolled hunting and cattle encroachment, the Batawana people of Ngamiland, under the leadership of the deceased Chief Moremi III’s wife, Mrs. Moremi, took the bold initiative to proclaim Moremi a game reserve in 1963.

It is the only officially protected area of the Okavango Delta, and as such holds tremendous scientific, environmental, and conservation importance. And, undoubtedly, Moremi ranks as one of the most beautiful reserves in Africa, possibly in the world. Moremi Game Reserve is situated in the central and eastern areas of the Okavango and it includes the Moremi Tongue and chief’s island, boasting one of the richest and most diverse ecosystems on the continent.

This makes for spectacular game viewing and bird watching, including all major, naturally occurring herbivore and carnivore species in the region, and over 400 species of birds, many migratory and some endangered. Both black and white rhino have recently been re-introduced, now making the reserve a ‘Big Five’ destination.

Contained within an area of approximately 3,900 square kilometers, here, land and delta meet to create an exceedingly picturesque preserve of floodplains, either seasonally or perennially wet, waterways, lagoons, pools, pans, grasslands and riparian, riverine, and mopane forests. This terrain makes driving Moremi’s many loops and trails both delightful and, at times, totally inspiring.

During this safari, you will be served daily breakfast, lunch, and dinner. Shipungo Safari & Tours will also provide you with bottled water. Botswana's safari camps provide very high-quality food and drink, most serve international-style cuisine, alongside the local lager Saint Louis, imported beers (Amstel or Windhoek), wines, and spirits.

In Botswana's villages and towns, meats, particularly beef and goat, are very popular; millet and sorghum porridge are staples. National specialities include Morama (an underground tuber), Morogo (wild spinach), Kalahari truffle, all sorts of beans, and Mopane worms - grubs, which are served boiled, deep-fried or cooked. Drinks include the cider-like bojalwa, or homemade ginger beer.