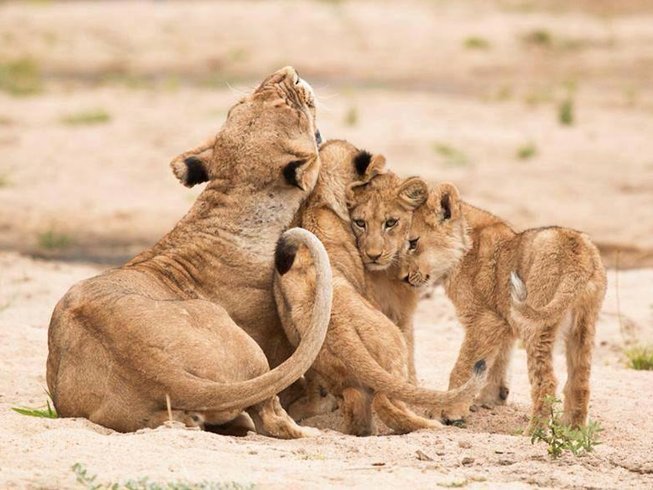 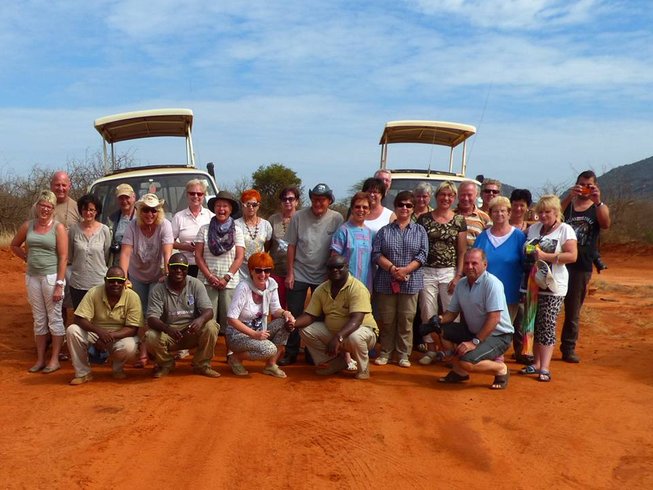 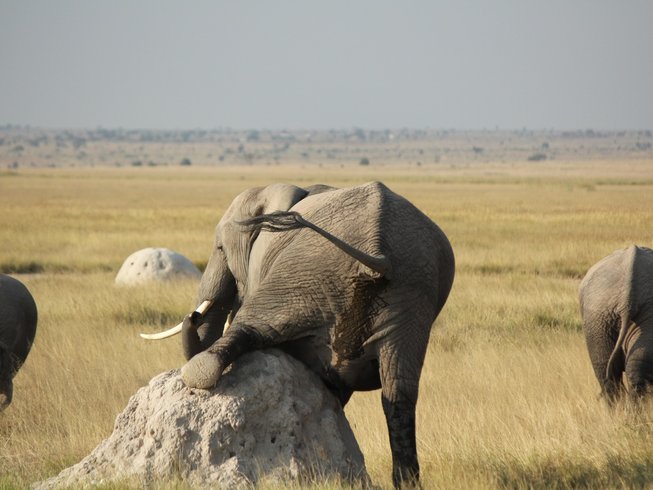 Login to save to your favorites
“Enjoy a thrilling safari in Kenya!”
​
Photo
all media

Explore the magnificent wildlife of Kenya's Tsavo East, Tsavo West, and Amboseli National Park with Arlom Safaris. You will have a glimpse of lions of Tsavo, lava flows, Mzima Springs, and the extensive lava yatta plateau. This private safari is complete with comfortable accommodations in tented camps and lodges, and various game drives in a mini bus that will definitely make your safari dream holiday checked off of your bucket list!

You will have the options to stay overnight at any of the following accommodations:

Kibo Safari Camp is a luxury tented camp in Amboseli National Park at the foot of Mount Kilimanjaro, the highest mountain in Africa. The camp has 73 self-contained tents for single, double, triple, and family accommodation. The beds have been custom designed and locally made using bush logs and will ensure a good night’s sleep! All tents have flush toilets, showers, and wash basins. You can enjoy your shower as you like: bubbling hot or refreshing cold.

Ngulia safari lodge is located in Tsavo West National Park with 52 rooms facing the vast wilderness and en-suits bathrooms facilities. It is one of the lodges with a great view of Kilimanjaro and overlooking the famous Rhino sanctuary, which is the largest in the world hence guaranteeing encounter with the rare African animal.

Voi Safari Lodge is located in Tsavo East National Park on top of a rocky hill with 52 en-suite standard rooms. Some of the rooms include twin beds while others have a double bed with an additional single bed. The lodge also has a free form pool with scenic views where you can take refreshing dips in the hot afternoons during your relaxing trip, or simply unwind beside in comfortable loungers.

You will be picked from your Nairobi hotel and drive south to Amboseli National Park. Enter the park through Ermito gate and proceed with a game drive en-route to Kibo Safari Camp for lunch. Get ready for an afternoon game drive in Amboseli in search for the large herds of elephants, buffaloes, antelopes, and many other animals including the cats family. Enjoy dinner and an overnight stay in Amboseli Kibo Camp.

Early morning game drive in private game sanctuary with the possibility to view the snow capped Mountain Kilimanjaro when the weather permits, herds of elephants, hyenas, lions and cheetahs in a morning hunting spree. Return to the lodge for breakfast and get ready for a drive to Tsavo West National Park with stop over at Shetani Lava for a brief history of this geographical feature, which dates back to more than 500 years ago.

Check-in at the Chyulu gate and proceed with a game drive to Mzima Springs where you can view fish, crocodiles, hippos, and other aquatic animals from an underground observation tank. Proceed to Rhino Valley Lodge for lunch followed by an afternoon game drive including a visit to the Rhino Sanctuary before returning to the lodge for dinner and an overnight stay.

After breakfast, you will proceed for a morning game drive with a visit to Mzima Springs where you can view fish, crocodiles, hippos, and other aquatic animals from an underground observation tank. Drive along the Mombasa / Nairobi highway to enter Tsavo East National Park through Manyani gate and with a game drive en-route to Ashnil Aruba Lodge for lunch.

Get ready for an afternoon game drive in search for the red elephants, buffaloes, antelopes, and many other animals including the cats family. Enjoy dinner and an overnight stay in Ashnil Arubai Lodge.

Early breakfast and thereafter game drive enroute to SGR Voi Station for those going to Nairobi. Estimated time of departure is at 9:15 a.m. or driving to Mombasa arriving in the late afternoon with sweet memories.

The sight of dust-red elephant wallowing, rolling, and spraying each other with the midnight blue waters of palm-shaded Galana River is one of the most evocative images in Africa. This, along with the 300-kilometer long Yatta Plateau, the longest lava flow in the world, make for an adventure unlike any other in the Tsavo East.

The park forms the largest protected area in Kenya and is home to most of the larger mammals, vast herds of dust-red elephant, rhino, buffalo, lion, leopard, pods of hippo, crocodile, waterbucks, lesser Kudu, gerenuk, and the prolific bird life features 500 recorded species.

From the sight of 50 million gallons of crystal clear water gushing out of from the under parched lava rock that is the Mzima Springs to the Shetani lava flows, Tsavo West is a beautiful, rugged wilderness. The savannah ecosystem comprises of open grasslands, scrublands, and Acacia woodlands, belts of riverine vegetation and rocky ridges including the Poacher's Lookout where visitors can see the teeming herds in the plains below.

Tsavo West offers some of the most magnificent game viewing in the world and attractions include elephant, rhino, hippo, lion, cheetah, leopard, buffaloes, diverse plant, and bird species including the threatened corncrake and near threatened Basra Reed Warbler.

Crowned by Mount Kilimanjaro, Africa's highest peak, the Amboseli National Park is one of Kenya's most popular parks. The name "Amboseli" comes from a Maasai word meaning "salty dust", and it is one of the best places in Africa to view large herds of elephants up close. Nature lovers can explore five different habitats here ranging from the dried-up bed of Lake Amboseli, wetlands with sulphur springs, the savannah, and woodlands. They can also visit the local Maasai community who live around the park and experience their authentic culture.

Breakfast, lunch, and dinner during the safari are included in the price.

Optional visit to the Masai villages to combine your wildlife safari with culture. There will be direct contribution of 25 USD per person in the villages to enable the community, appreciate, and help them in their daily upbringing, where photos and tour of the village will be accepted.

Please book your flight to arrive at Jomo Kenyatta International Airport (NBO). Transfer from and to the airport is included. Arlom Safaris will pick you up from the airport.