8 Days Northern Tanzania Safari Tour
This listing has no upcoming availability. Check out these similar experiences 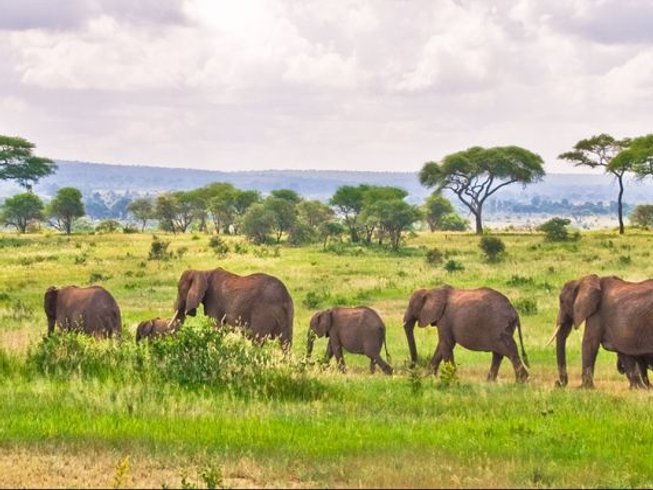 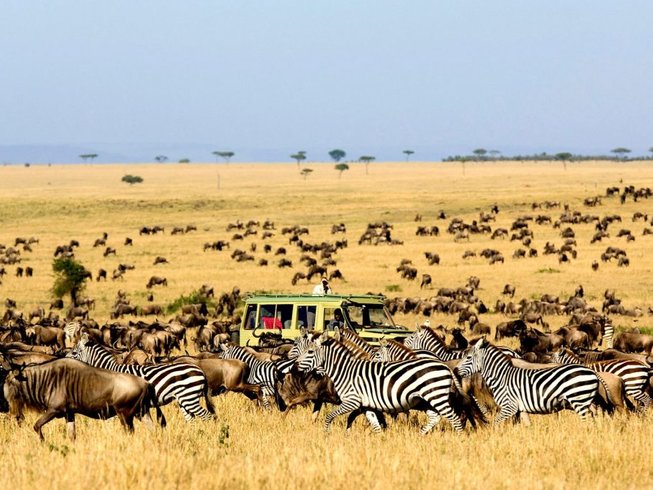 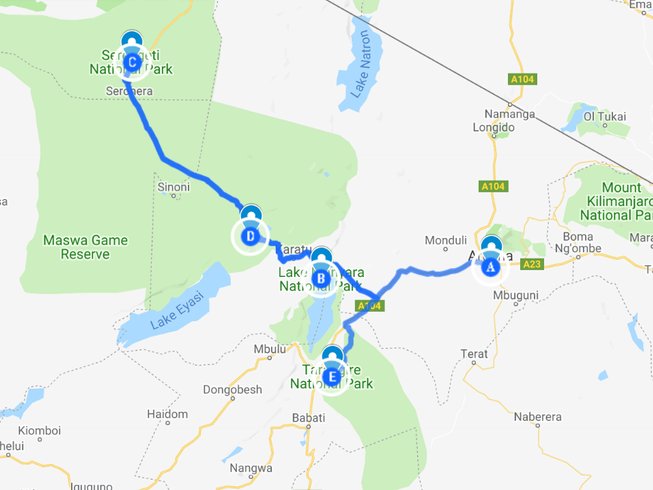 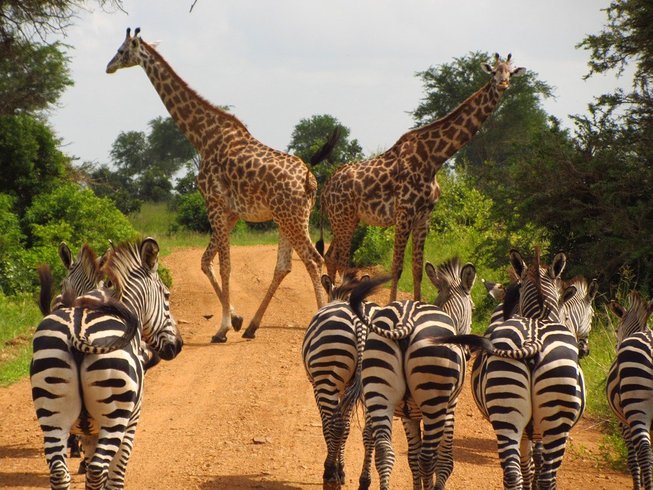 This trip offers plenty of opportunity to experience Tanzania's magnificent wildlife within its two spectacular wildlife areas in Northern Tanzania. You’ll see incredibly diverse wildlife for as far as the eye can see from giraffes, to zebras, impalas, monkeys, and hippos the list goes on on this ultimate East African / Tanzanian adventure.

You will be staying in the following accommodations during this safari:

Pick up from your Arusha hotel or Kilimanjaro International Airport (JRO) and depart for Lake Manyara National Park. You will arrive mid-morning where you will have an introductory game drive as you head to the lodge for lunch. Have lunch, relax, and later enjoy another game drive at 4 p.m.

After an early breakfast at your lodge, depart for Serengeti National Park, home to the Big Five and numerous plains game. Spend the rest of the day game viewing within the park with lunch served at the lodge. Afternoon game drive is at 4 p.m.

Have breakfast and immediately depart for Ngorongoro Conservation Area to arrive before lunch. Have a game drive as you head to the lodge for lunch. After lunch relax by the pool area and later have another game drive at 4 p.m.

At 7 a.m.,m check out of the lodge with packed picnic lunch and depart for a tour to the rim of the crater. Later, ascend for a game drive to look for numerous plains game and the Big Five. Spend the day within the crater and have lunch at one of the famous picnic spots in the park.

In the evening, you will return to the lodge and enjoy the most magnificent views of the crater from the lodge.

Have breakfast then depart for Tarangire National Park by mid-morning. Check in at the lodge and late have a game drive.

Have breakfast then depart for Arusha to arrive for lunch. You will be dropped at the airport or hotel of your choice.

Located 125 kilometers west of Arusha town, nestling by the wall of the Great Rift Valley, Lake Manyara National Park is one of the oldest and most popular sanctuaries in East Africa. The park has a large variety of habitats, making it possible to support a wealth of wildlife in its small area.

The main habitats include the shallow soda lake itself which occupies 77% of the national park's total area of 330 square kilometers, the groundwater forest, open grassland, acacia woodland, and the rift wall.

The most famous spectacle in the park is the tree-climbing lions, which are occasionally seen along branches of acacia trees. Other animals found in the park include buffalo, elephants, leopards, baboons, impala, giraffes, zebra, wildebeest, ostrich and hippos.

Popularly referred to as an ornithologist’s paradise, Lake Manyara National Park contains over 400 bird species found in most savanna and river habitats in East Africa. Common water birds to be seen here are pelicans, spoonbills, Egyptian geese, hammerkops and the migratory flamingos, which arrive in hundreds of thousands creating one of Africa’s great natural sights over the soda lakes.

Covering an area of 14,763 square kilometers, Serengeti National Park is the second largest national park in Tanzania after Ruaha. The park is located some 320 kilometers to the northwest of Arusha, lying in a high plateau between the Ngorongoro highlands and the Kenya / Tanzania border, and extending almost to Lake Victoria to the west.

Aptly named “endless plains” by the Maasai people, you will nimmediately experience this vastness as you enter the southeastern plains of the park from Ngorongoro.

Declared a protected area in 1921 and gazetted as a National park in 1951, Serengeti is the oldest national park in Tanzania and undoubtedly one of the most famous wildlife sanctuaries in the world. The principal features of the Serengeti are the short and long grass plains in the south and east, the acacia savannah in the central areas, the hilly and densely wooded areas in the north, and the extensive woodland in the west.

There is a variety of scenery, which include the plains, lakes, hills and the rock outcrops called kopjes. The main game drive areas in the Serengeti are the Seronera Valley, the Western Corridor, and Lobo or Northern Serengeti.

The Seronera Valley in central Serengeti endowed with permanent surface water attract a large concentration of wildlife throughout the year. Common animals that can be seen here are lions, buffaloes, impalas, hippos, waterbucks, elephants, cheetahs and the leopard.

From December, when the long rains start, to May, eastern Serengeti plains provide the best opportunities for game viewing as hundreds of thousands of the migratory animals are concentrated in this part attracted by the short palatable grass.

Between May and July, when drought sets in, Serengeti is the site of one of the most breathtaking events in the animal kingdom - the migration of thousands of wildebeest heading southwest, north or west in search of water and greener pastures.

The Lobo area remains rich in wildlife during the dry months of August to November when most of the game has moved from the grass plains in the south. This is also true of the Western Corridor towards Lake Victoria when the migration usually lingers in the area between June and July.

Serengeti provides sanctuary to the highest concentration of plains animals in the world. Survey estimates indicate an animal population of over four million including 3,000 lions, 1,600,000 wildebeest, 300,000 Thomson‘s and Grant‘s gazelle, and 500,000 zebras. There are over 400 species of birds in the Serengeti.

A UNESCO protected World Heritage Site and an International Biosphere Reserve, the Ngorongoro Conservation Area is situated some 190 kilometers west of Arusha, between Lake Manyara and Serengeti National Parks.

Covering approximately 8,292 square kilometers, the Ngorongoro Conservation Area consists of the Ngorongoro Crater itself, the Olduvai Gorge and Ndutu, the Empakai Crater, and the Oldonyo Lengai Mountain.

The Ngorongoro Conservation Area is a pioneering experiment in multi-purpose land use where people (the Maasai), their livestock and wildlife coexist and share the same protected habitat. Wild animals are protected as in the national parks. The craters of Ngorongoro and Empakai are reserved exclusively for wildlife, while the rest of the conservation area is shared by wildlife, people and livestock.

“It is impossible to give a fair description of the size and beauty of the Crater, for there is nothing with which one can compare it. It is one of the Wonders of the World…” once wrote Professor Bernhard Grzimek.

The rainy season is between November and May. The altitude at the crater rim is about 2286 metres above sea level, and temperatures can get quite chilly in the evening, especially between May to September.

Tarangire National Park lies 120 kilometers south of Arusha, along the Great North Road highway, and is very popular for day trips from the town. Tarangire offers a wide variety of wildlife in its area of 2,850 square kilometers. As in all ecosystems, the vegetation and the types of animals you find are closely correlated.

The principal features of the park are the flood plains and the grassland, mainly comprising of various types of acacia trees, and a few scattered baobabs, tamarind, and the sausage trees.

This period stretches between June and October and it is the best season for game viewing in Tarangire. The most common animals found in the park include zebras, wildebeest, lions, leopards, waterbucks, giraffe, elephants, gazelles, impala, gerenuk, lesser kudu and the beautiful fringe-eared oryx.

During this safari tour, you will be provided with seven breakfasts, eight lunches, and seven dinners.

You can book these optional activities for a fee:

Facebook Twitter Email Whatsapp
Organized by ZOTE TOURS(SMC-PRIVATE) COMPANY LIMITED
“To provide authentic hospitality by making a difference in the lives of the people we touch every day”
Zanzibar, Tanzania
The organizer also speaks: French, German