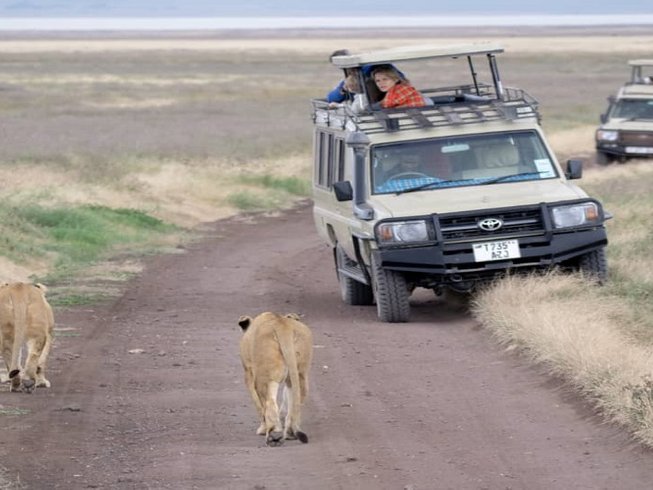 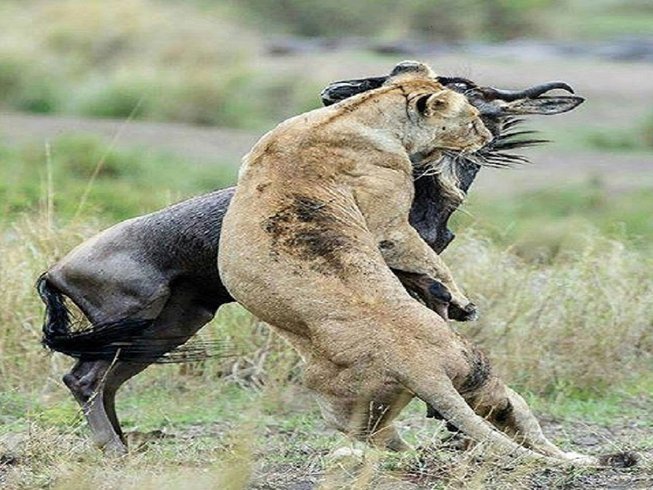 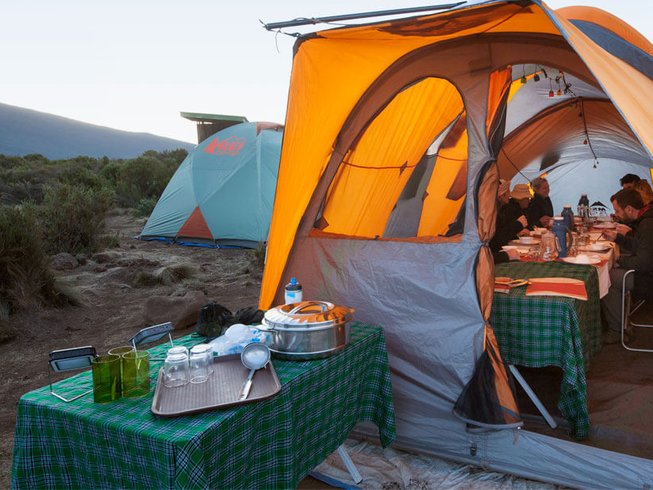 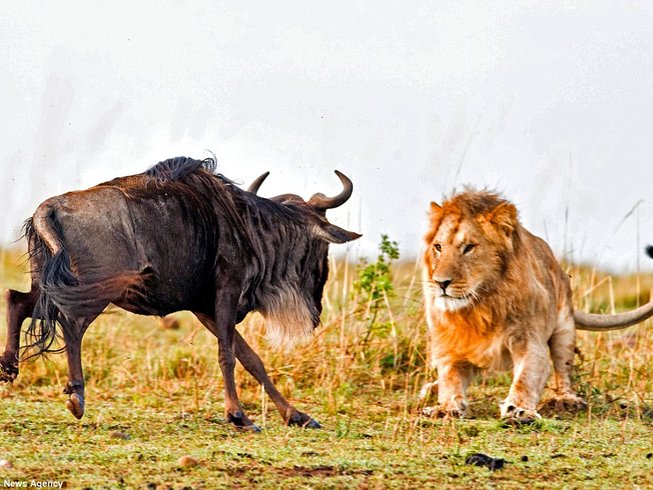 On this camping safari, you will experience it all! From fantastic wildlife to impressive landscapes and meeting the local people. You will visit the highlights of northern Tanzania such as the Tarangire National Park, Lake Natron, the Serengeti National Park, and the Ngorongoro Crater.

During the safari, you will stay in a tent at the following campsites:

After a short briefing in the morning, you will head off in direction of the Tarangire National Park. The park with its savannah, baobab trees, seasonal swamps and lagoons is home to huge elephant herds.

Animals gather at the life-giving Tarangire River and you should see a selection of mammals ranging from giraffes, bushbucks, and hartebeests to the weird-looking gerenuk and fringe-eared oryx.

The park is also home to buffaloes, zebras, and wildebeests which are always closely followed by a range of predators such as lions. Leopards are seen now and then but cheetahs are rarely spotted.

From the open roof of the safari vehicle, you will be able to absorb the landscape and watch the animals. In the late afternoon, you will arrive at a campsite inside the park, where you will spend the night in a tent.

After breakfast, you will leave the Tarangire National Park and head to the multicultural village of Mto wa Mbu. From here you will travel on a spectacular and very bumpy gravel road along the Rift Valley Escarpment with Ol Doinyo Lengai “the holy mountain” of the Maasai in the distance.

Today’s destination is the beautiful Masai village of Ngare Sero, an oasis in the hot and dusty Rift Valley. In the distance, you will notice a pink glow from thousands of flamingos breeding and feeding on the algae of the alkaline Lake Natron. In the afternoon you will join a Maasai guide on a walk to a nearby waterfall before you return to the campsite for your overnight.

After an early start, you will travel along adventurous dirt tracks with breath-taking views as your vehicle climbs out of the Rift Valley to reach the grassy plains of the Serengeti by midday. Serengeti means “endless plains” in the language of the Maasai and you will see the grassland savannah stretching to the horizon.

The Serengeti is the most famous park in Tanzania and it is home to the largest animal migration on the planet - hundreds of thousands of animals trek to find fresh grass and water. You will overnight at a campsite in the northern or central part of the park.

The entire day is dedicated to game viewing in the Serengeti National Park. You will either go on a full day game drive or join early morning and afternoon drives in the Seronera area, depending on last night’s stop.

Between December and May, huge herds of wildebeests and zebras will be seen, with calves and foals being born between January and March. The Seronera area is also the best place to spot the shy and nocturnal leopard. You will spend the night at a campsite in the Seronera area.

The morning is set aside for another game drive in the Serengeti and you might spot some creatures that you haven’t seen yet. Animals tend to be more active in the morning before the temperatures soar around midday.

After lunch, you will leave the plains of the Serengeti and travel to the highlands of the Ngorongoro Conservation Area. You will camp at a campsite directly on the Ngorongoro Crater’s edge with a view over the collapsed volcano. It is a perfect spot to enjoy a sundowner at sunset.

Rise and shine! It is up at daybreak to take on the steep path leading down into the 600-meter deep crater. The slopes are forested but soon the landscape changes to savannah with the occasional acacia tree here and there.

The wildlife in the crater is just breath-taking and with a little luck, you might see the Big Five – lion, elephant, buffalo, rhino, and leopard. You should also see warthogs, wildebeests, zebras, hippos and some of the more than 500 bird species of the area.

After an entire morning of game viewing and a picnic lunch in the crater, you will travel to Mto wa Mbu where you will overnight on a campsite.

After a leisurely breakfast, you will start your return trip to Arusha, where you will arrive around midday. You will be dropped off in the city center or at the airport.

Starting from Arusha, this safari will take you to Tarangire National Park, Lake Natron, Serengeti National Park, and Ngorongoro Conservation Area before going back to Arusha.

The Ngorongoro Conservation Area is a pioneering experiment in multi-purpose land use where people (the Maasai), their livestock and wildlife coexist and share the same protected habitat.

Wild animals are protected as in the national parks. The craters of Ngorongoro and Empakai are reserved exclusively for wildlife, while the rest of the Conservation Area is shared by wildlife, people and livestock.

The sight of the Ngorongoro Crater is simply stunning. "It is impossible to give a fair description of the size and beauty of the Crater, for there is nothing with which one can compare it. It is one of the Wonders of the World," once wrote Professor Bernhard Grzimek.

The rainy season is between November and May. The altitude at the crater rim is about 2286 meters above sea level, and temperatures can get quite chilly in the evening, especially between May to September.

Tarangire National Park lies 120 kilometers south of Arusha, along The Great North Road highway, and is very popular for day trips from the town. Tarangire offers a wide variety of wildlife in its area of 2,850 square kilometers.

As in all ecosystems, the vegetation and the types of animals you find are closely correlated. The principal features of the park are the flood plains and the grassland, mainly comprising of various types of acacia trees, and a few scattered baobabs, tamarind and the sausage trees.

This period stretches between June and October and it is the best season for game viewing in Tarangire. The most common animals found in the park include zebras, wildebeest, lions, leopards, waterbucks, giraffe, elephants, gazelles, impala, gerenuk, lesser kudu, and the beautiful fringe-eared oryx.

Covering an area of 14,763 square kilometers, Serengeti National Park is the second-largest national park in Tanzania after Ruaha. The park is located some 320 kilometers to the northwest of Arusha, lying in a high plateau between the Ngorongoro highlands and the Kenya / Tanzania border, and extending almost to Lake Victoria to the west.

Aptly named “endless plains” by the Maasai people, you immediately experience this vastness as you enter the southeastern plains of the park from Ngorongoro.

Declared a protected area in 1921 and gazetted as a National park in 1951, Serengeti is the oldest national park in Tanzania and undoubtedly one of the most famous wildlife sanctuaries in the world.

The principal features of the Serengeti are the short and long grass plains in the south and east, the acacia savannah in the central areas, the hilly and densely wooded areas in the north and the extensive woodland in the west.

There is a variety of scenery, which includes the plains, lakes, hills and the rock outcrops called kopjes. The main game drive areas in the Serengeti are the Seronera Valley, the Western Corridor, and Lobo or northern Serengeti.

The Seronera Valley in central Serengeti endowed with permanent surface water attracts a large concentration of wildlife throughout the year. Common animals that can be seen here are lions, buffaloes, impalas, hippos, waterbucks, elephants, cheetahs, and the leopard.

From December, when the long rains start, to May, eastern Serengeti plains provide the best opportunities for game viewing as hundreds of thousands of the migratory animals are concentrated in this part attracted by the short palatable grass.

Between May and July, when drought sets in, Serengeti is the site of one of the most breathtaking events in the animal kingdom – the migration of thousands of wildebeest heading southwest, north or west in search of water and greener pastures.

The Lobo area remains rich in wildlife during the dry months of August to November when most of the game has moved from the grass plains in the south. This is also true of the Western Corridor towards Lake Victoria when the migration usually lingers in the area between June and July.

Serengeti provides sanctuary to the highest concentration of plains animals in the world. Survey estimates indicate an animal population of over 4 million including 3,000 lions, 1,600,000 wildebeest, 300,000 Thomson‘s and Grant‘s gazelle, 500,000 zebras. There are over 400 species of birds in the Serengeti.

Meals as outlined in the itinerary as well as mineral water are included in the package.

Please book your flight to arrive at Kilimanjaro International Airport (JRO). Transfer from the airport is not included, but it is available upon request at an extra cost. For more information, please send an inquiry.