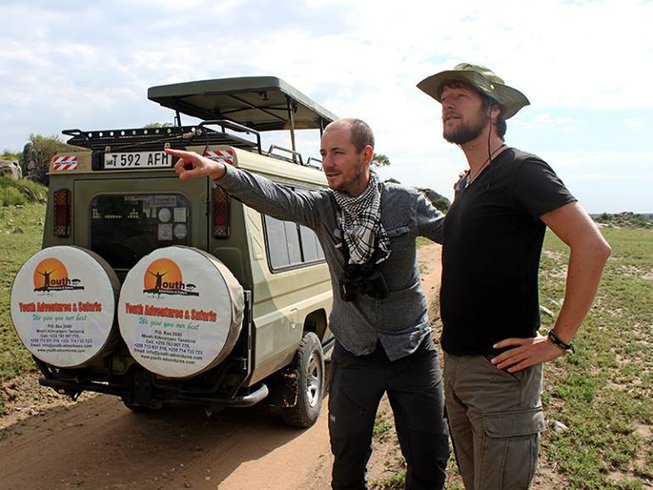 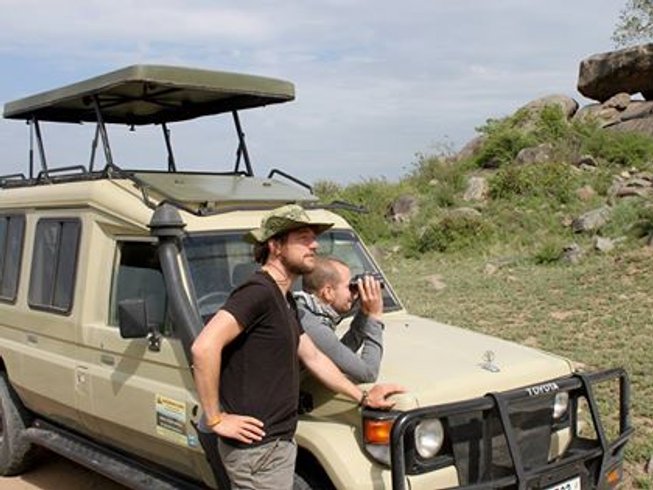 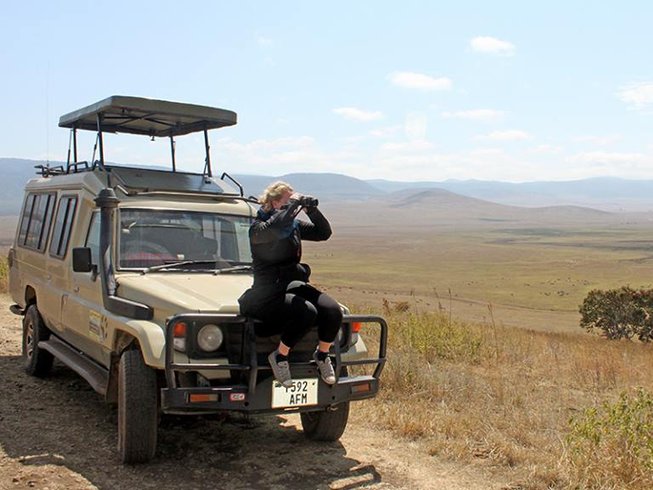 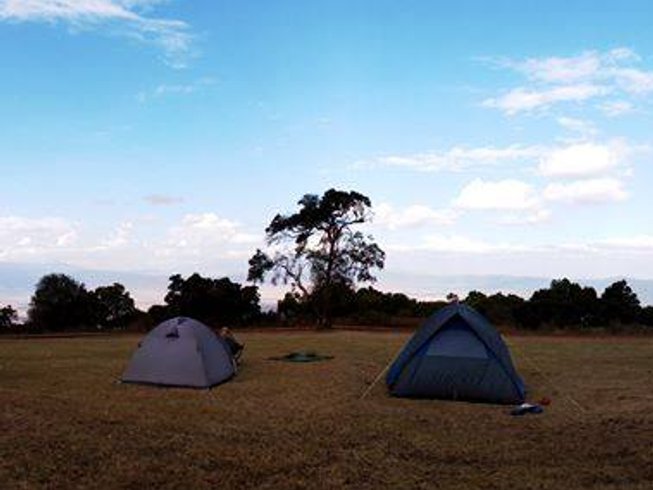 Login to save to your favorites
“Discover the greatness of Tanzania's wildlife!”
​
Photo
all media

In this wildebeest safari, you will explore the Serengeti National Park in a private open roof vehicle. This tour to Tanzania is a memorable classic tour that will take you to other game parks like Ngorongoro Crater, Tarangire National Park, and Lake Manyara National Park. Have a great experience observing the seasonal movements of animals, especially the wildebeest migration animals.

You will be provided six nights of accommodation during the safari. You will have a full-board accommodation on all the days on which you will be on the safari tour. On arrival day, you will stay in one of the hotels in Moshi, such as Parkview Inn, Panama Hotel, and Keys Hotel.

You will be picked up from Arusha and get transferred to the Lake Manyara National Park. You will arrive in time for lunch at the lodge, and after lunch, you will head into the Lake Manyara National Park for an afternoon game drive. This national park is one of Tanzania’s most dramatically located wildlife areas, consisting of a massive but shallow soda lake (covering two-thirds of the park), located at the foot of the Great Rift Valley’s western escarpment.

The park’s varied habitat attracts a wide variety of animals, including one of Africa’s largest concentrations of elephants, Lake Manyara’s unique tree-climbing lions, as well as large flocks of flamingos attracted by the algae in the lake. Dinner and overnight stay will be provided as per the standard and type of accommodation option requested. Estimated non-game-viewing travel time is two and a half hours, covering a distance of 130 kilometers.

You will then head to the central park area, known as the Seronera area, one of the richest wildlife habitats in the park, featuring the Seronera River, which provides a valuable water source to this area and therefore attracts wildlife, well-representative of most of the Serengeti’s species. You will arrive in time for lunch and enjoy an afternoon game drive in the Serengeti National Park.

Dinner and overnight will be provided as per the standard and type of accommodation option requested. Estimated non-game-viewing travel time is six hours, covering a distance of 205 kilometers.

After breakfast, you will have a game viewing drive along the Sogore River Circuit, which loops into the plains south of the Seronera River, and which is good for possible lion, Thomson gazelle, topi, ostrich, and cheetah sightings. The visitor’s center, not far from the Serengeti Seronera Lodge and public campsites, is well-worth a visit after the morning’s game drive.

This nicely designed center, offers some interesting wildlife displays as well as a gift shop selling information leaflets and maps of the area. The center also has a shop where cold drinks and snacks can be purchased, as well as a picnic area and information trail up and around a nearby kopje. You will enjoy a relaxed picnic lunch at the center in the shade of the giant acacia trees.

In the afternoon, you will follow the Kopjes Circuit, which goes anti-clockwise around the Maasai Kopjes, which usually attract a number of lions and some formidably large cobras. Kopjes are weathered granite outcrops, scattered around the plains, most of which are miniature ecosystems, providing shade and drinking water in pools left in the rock after the rains. This makes the kopjes particularly good for spotting wildlife in the dry seasons, including lions, which like to lie in wait for animals coming to drink.

Dinner and overnight will be provided as per the standard and type of accommodation option requested.

After breakfast at the lodge, you will depart to Ngorongoro Conservation Area. You will have a stopover at Olduvai Gorge, boasting with a history dating back to the dawn of time. It was here that the anthropologists Doctors Lois and Mary Leakey discovered the skulls of the “nutcracker man” and “handy man,” both very significant links in the chain of human evolution.

You will arrive in time for lunch at the lodge and spend the afternoon at leisure. Dinner and overnight will be provided as per the standard and type of accommodation option requested on the crater rim, but there will be no accommodation available inside the crater. Estimated non-game-viewing travel time is four hours, covering a distance of 145 kilometers.

After breakfast, you will descend 600 meters into this magnificent crater for a full-day game drive. The Ngorongoro Crater is one of the most densely crowded African wildlife areas in the world and is home to an estimated 30,000 animals including some of Tanzania’s last remaining black rhino.

Supported by a year round water supply and fodder, the Ngorongoro National Park supports a vast variety of animals, which include herds of wildebeest, zebra, buffalo, eland, warthog, hippo, and giant African elephants. Another big draw card to this picturesque national park is its huge population of predators, which include lions, hyenas, jackals, cheetahs and the ever-elusive leopard. You will enjoy a picnic lunch on the crater floor.

Dinner and overnight will be provided as per the standard and type of accommodation option requested on the crater rim, but there will be no accommodation available inside the crater.

After breakfast, you will depart for the Tarangire National Park. The park runs along the line of the Tarangire River and is mainly made up of low-lying hills on the Great Rift Valley floor. Its natural vegetation mainly consists of Acacia woodland and giant African Baobab trees, with huge swamp areas in the south. Both the river and the swamps act like a magnet for wild animals, during Tanzania’s dry season.

The Tarangire National Park is reputed to contain some of the largest elephant herds in Africa. This African National Park is also home to three rare species of animals, the greater kudu, the fringed-eared oryx, as well as a few ashy starlings. After a picnic lunch, you will have an afternoon game drive.

Dinner and overnight will be provided in the Tarangire National Park area, as per the standard and type of accommodation option requested. Estimated non-game-viewing travel time is three and a half hours, covering a distance of 155 kilometers.

You will enjoy an early morning game drive in the Tarangire National Park, followed by breakfast at the lodge or campsite. You will then transfer back to Moshi. Upon arrival in Moshi, you will have your lunch and then end your African safari adventure. Estimated non-game-viewing travel time is two hours, covering a distance of 120 kilometers.

Included in your safari itinerary is an excursion to Olduvai Gorge and a visit to a visitor’s center not far from the Serengeti Seronera Lodge and public campsites.

You will be served breakfast, lunch, and dinner daily. Mineral water and soft drinks will be provided during game drives.

Be one of the few fortunate people to glide in a hot air balloon over the Serengeti Plains, which is available at a supplementary cost by pre-arrangement. Float silently above the awakening bush, while spotting wildlife and enjoying the amazing scenery of Africa, across rivers and over numerous small villages.

Please book your flight to arrive at Kilimanjaro International Airport (JRO). Transfer from and to the airport is included. Youth Adventures and Safaris will pick you up from the airport.

Facebook Twitter Email Whatsapp
Organized by Youth Adventures and Safaris
YOUTH in Youth Adventures relates not so much to targeting young customers but rather to promote local community and youth development in Tanzania.
Tanzania, Tanzania
The organizer also speaks: French, German