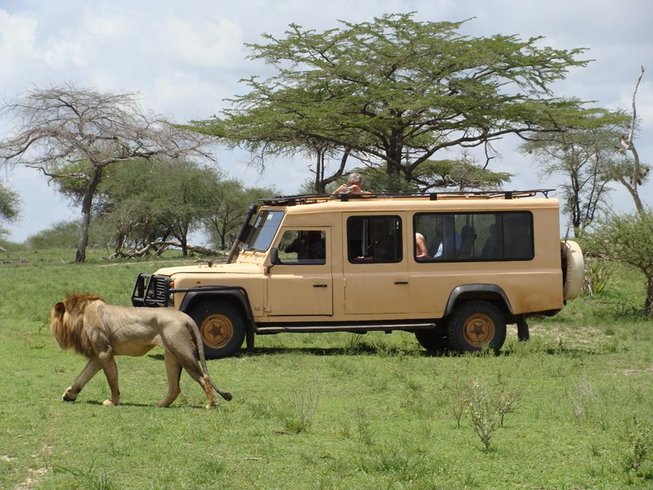 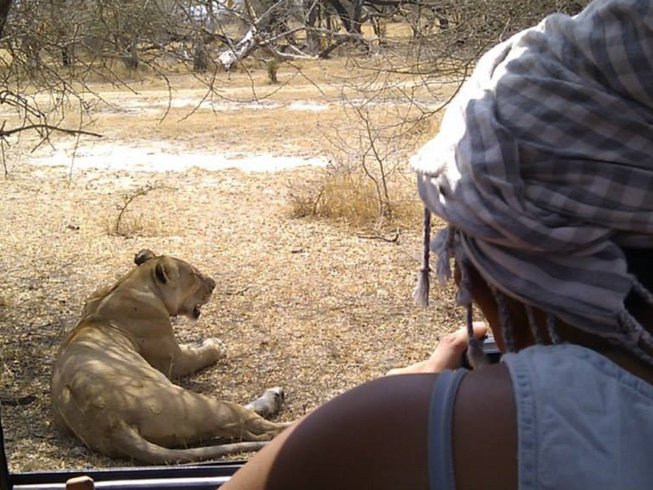 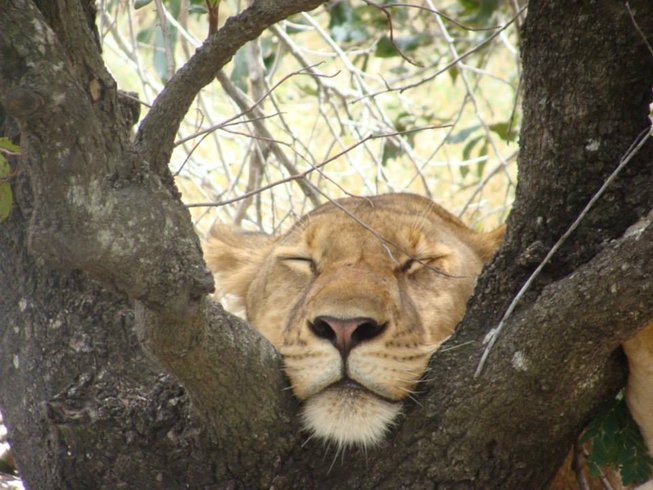 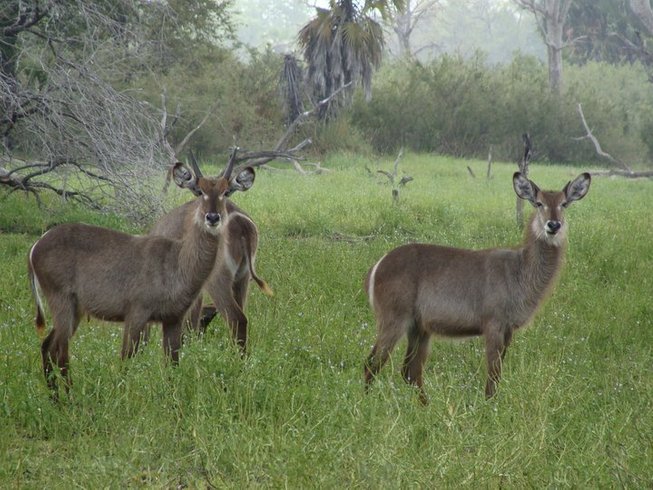 Login to save to your favorites
“See the glorious wildlife of Tanzania today!”
​
Photo
all media

Come and join the Wildness Safari team in this superb safari holiday in Tanzania's Southern Circuit. This is the perfect adventure vacation for wildlife enthusiasts, serious safari-goers, or newcomers alike. This journey promises the best that the south area has to offer, with an amazing selection of iconic parks and reserves for you to experience in all their glory. Book this trip now and be amazed at the wonders of nature and of life.

This camp is located outside the Mikumi National Park, and is made up of en-suite cottages, en-suite superior chalet, three en-suite bedroom family cottages, a budget cottage room, and a campsite that has a private veranda and is decorated with locally-made furniture and fabrics in order to keep an authentic atmosphere in the rooms. The cottages can be configured as single, double, triple, quadruple, or family rooms for five up to eight people.

No matter which type of accommodation you choose, you will wake up listening to uninterrupted sounds of beetles, crickets, and birds. You can also enjoy fresh, local Tanzanian food, as the vegetables are grown in the camp's own garden. There is also bar that offers a wide range of wines, spirits, and soft drinks.

This lodge is located outside the Ruaha National Park. It is 20 kilometers from the gate and takes 30 minutes to reach. The lodge is built on a hill with a wonderful panoramic view. There are many types of different birds, wild flowers, butterflies, and trees that can be seen nearby. The lodge aims to provide quality and affordable accommodation and safaris. The self-contained cottages are very comfortable and private, each with its own balcony that has a beautiful view.

The lodge's water supply is heated by solar power, and its 24-hour electricity supply is solar-powered as well. The reception, dining room, and well-stocked bar are all under one roof, with a gallery to enjoy the spectacular African sunrise and sunset. Experienced chefs offer both continental and Tanzanian cuisine using fresh products from the local area. The lodge also serves fresh juice and bakes its own bread.

During the safari, you will be accommodated in Selous Tented Camp, Eco Friendly camp located along the River Rufiji

Selous Tented Camp is set in an area of pristine wilderness, situated in the forest on the shores of the Rufiji River, outside the Reserve, within 9 kilometers to Mtemere, the Selous Reserve main entrance gate .

Selous Tented Camp offers a unique accommodation for travelers wishing to get closer to the unspoiled wilderness of the Untouched Africa and enjoy wildlife and scenery undisturbed. The Camp itself consists of the comfort and spacious tented rooms overlooking the River Rufiji.

Selous Tented Camp offers a magnificent safari experience in the heart of the African bush along River, with comfortable accommodation perfectly in balance with the surroundings, unexpected in this remote area.

Enjoy the splendor of the natural African bush with breathtaking with stunning views of the river with delicious meals freshly cooked by local chef with local ingredients.

Also chat to one of our guides while gazing up at the stars in the night sky by our warm campfire.

At around 7:30 a.m., you will have a meet-and-greet session in Dar es Salaam, then drive for about five hours with packed lunch to Selous Game Reserve. You will have a boat ride safari in the evening, then enjoy your dinner and an overnight stay at Selous Tented Camp.

Lunch will be packed so you can enjoy a full day of game driving in the reserve. Your dinner and overnight stay will still be at Selous Tented Camp.

For this day, you will have an early morning walking safari in the Selous Game Reserve. Afterwards, you will drive for around eight hours to Mikumi National Park, complete with packed lunch. You will have dinner and an overnight stay at Camp Bastian Mikumi.

After breakfast, you will drive with packed lunch for about six hours to Ruaha National Park. Your dinner and overnight stay will be at the Ruaha Hilltop Lodge.

Lunch will be packed so you can enjoy a full day of game driving in the park. Your dinner and overnight stay will still be at the Ruaha Hilltop Lodge.

After breakfast, you will drive with packed lunch for about six hours back to Mikumi National Park. Enjoy a late afternoon game drive then have dinner and another overnight stay at Camp Bastian Mikumi.

After breakfast, you will drive back to Dar es Salaam, again for about six hours and with packed lunch. You will be dropped off at either your hotel for the night, the seaport, or Julius Nyerere International Airport (DAR) for your flight home.

Located north of the Selous Game Reserve, this park is surrounded by open grasslands and mountain ranges, and covers an area of 3,230 square kilometers. The open horizons and abundant wildlife of the park's popular centerpiece, the Mkata Floodplain (also known as the "mini-Serengeti"), draw frequent comparisons to the more famous Serengeti plains. Animals commonly seen in the area include the elephant, giraffe, zebra, antelope, wildebeest, eland, crocodile, hippo, and baboon.

If you are lucky, you may also see the lion and leopard. Another attraction in the park are the hippo pools, where you can watch hippos wallowing and snorting at close range. Over 300 species of birds are seen in the park as well, including the saddle-billed stork, hamerkop, malachite kingfisher, lilac-breasted roller, yellow-throated longclaw, bateleur, and others.

This well-kept wildlife secret is the first largest national park with the biggest elephant sanctuary in Tanzania. It covers an area of 20,300 square kilometers and has an altitude of 1,000 meters. The Great Ruaha River is home to hippos and crocodiles. Waterbucks, reedbucks, and buffaloes also venture into the river’s edge to drink. Other animals found in the area include the lion, leopard, hyena, African wild dog, and jackal.

Antelope species such as the kudu, impala, sable antelope, roan antelope, Grant's gazelle, and dik-dik thrive in the grasslands bordering the river alongside the giraffe, zebra, warthog, mongoose, porcupine, wildcat, and civet. Ruaha also has a prolific bird life with over 370 species recorded, some of which are not found in Northern Tanzania.

Eurasian migrant birds flock to Ruaha twice a year, during March to April and October to November, joining the residents kingfisher, hornbill, sunbird, egret, and plover. Activities in Ruaha include game driving, bird watching, and walking safaris accompanied by an armed ranger.

This reserve is the largest protected wildlife area in southern Tanzania and the biggest game reserve in Africa, covering a vast area of about 54,600 square kilometers, making it bigger than Switzerland. It has an altitude of between 110 to 1,250 meters, and covers six percent of Tanzania. It is designated by United Nations as a World Heritage site due to its unique ecological importance.

The Selous Game Reserve has the finest, most unspoiled virgin bush, and is one of the least-scientifically researched areas in Africa. 1,700 botanical species have been identified in the reserve. It boasts of a large population of elephants, as well as large numbers of the buffalo, hippo, crocodile, and endangered wild dog. Animals commonly seen in the area include the lion, bushbuck, impala, warthog, ostrich, giraffe, eland, baboon, zebra, hyena, kudu, rare sable antelope, and leopard.

There are more than 400 species of bird life in the Selous Game Reserve which include the African fish eagle, kingfisher, secretarybird, sunbird, hamerkop, saddle-billed, yellow-billed, openbill, and marabou stork, weaver, vulture, and others.

Six breakfasts, seven lunches, and six dinners are included in the price of this retreat.

Please book your flight to arrive at Julius Nyerere International Airport (DAR). Transfer to the airport is included. Wildness Safari will drop you off at the airport.