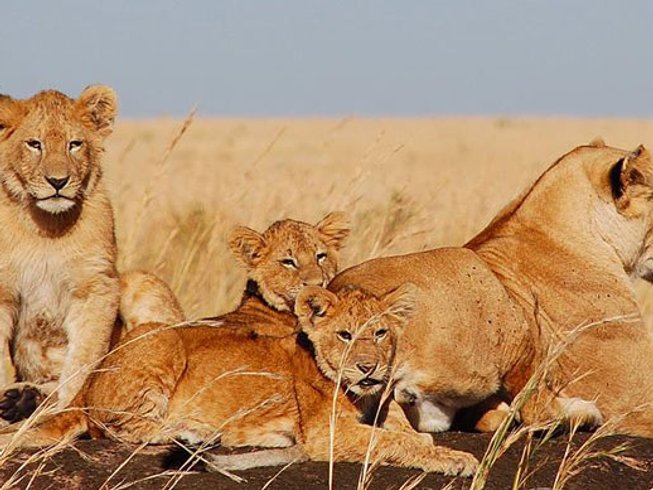 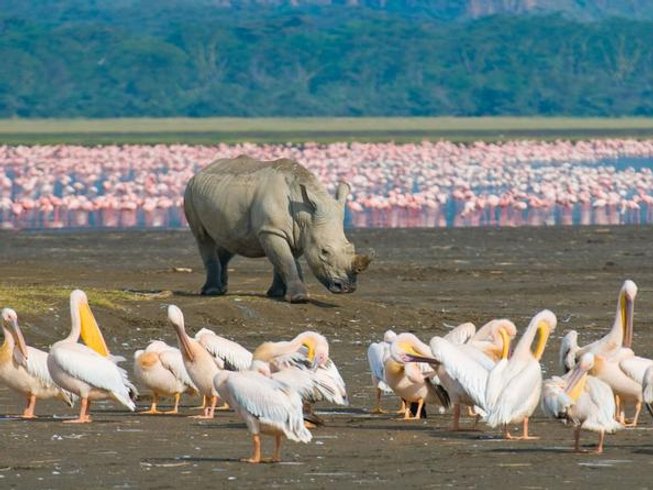 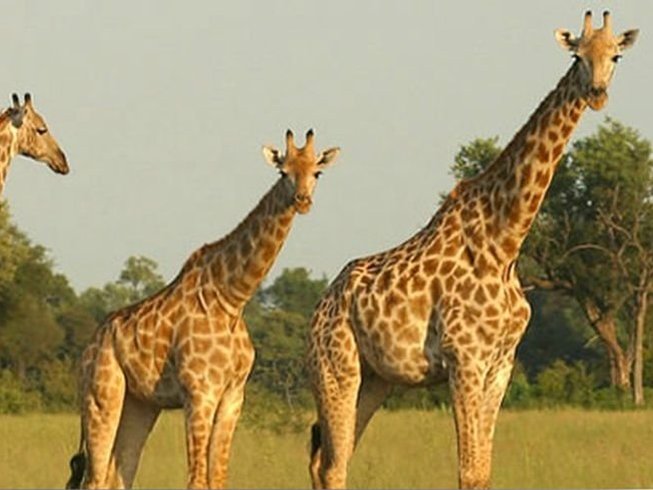 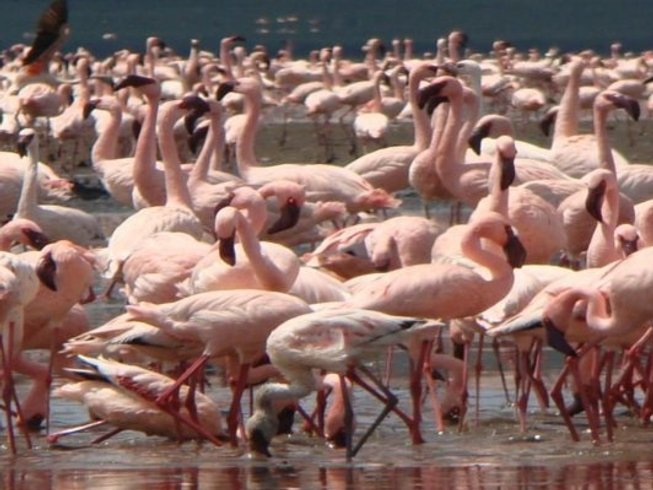 Login to save to your favorites
“Enjoy a marvelous safari holiday here!”
​
Photo
all media

Venturesome Safari in Kenya and Tanzania

Join this breathtaking safari to experience an extraordinary wildlife adventure in two wildest areas in Africa, Kenya and Tanzania. During this safari, you will spend your day observing endemic African animals and witnessing the beauty of one of the most beautiful wild environment in the world. From African lion to beautiful pink flamingo, this safari will ensure you have a great time during your wildlife holiday. Pack now and enjoy what Kenya and Tanzania hold!

This safari will start off its journey from the beautiful Maasai Mara National Reserve via the Great Rift Valley which offers spectacular views of the Maasai Mara National Reserve. You will spend your time in search of the wildlife that makes this one of Africa's premier national parks. The Maasai Mara National Reserve is especially famous for its large cat population and also the fact that it plays an integral role in the wildebeest migration which is a spectacular wildlife view like none other on earth. Then, you will proceed to Ngorongoro Crater, the largest unbroken caldera in the world. It has been described as one of the great natural wonders of the world. The scenic and wildlife adventure of this long Kenya and Tanzania safari will end in Nairobi on the last day.

Departing from the capital of Kenya, Nairobi, the team will drive you down to the escarpment via the floor of the scenic Great Rift Valley area. You will arrive at Maasai Mara Camp in time for lunch. Located near the Maasai Mara National Reserve, the safari camp is tucked away in the cool shade of indigenous trees which will be offering an escape from the African heat. You will stay in permanent tents that are self-contained and fitted with feature beds and en-suite bathroom areas. In the afternoon, you will enjoy a game drive in the Maasai Mara National Reserve wherein the night you can hear a chorus of different animal sounds as they communicate with each other in the darkness.

Maasai Mara National Reserve (Maasai Mara) is situated in south-west Kenya and is one of Africa’s greatest wildlife reserves. Together with the Serengeti National Park in Tanzania, the park forms Africa’s most diverse, incredible, and spectacular eco-systems, and possibly the world’s top safari big game viewing eco-system.

When the wildebeest migration left the Maasai Mara, they are in the Serengeti National Park heading south to where they will give birth in February to March. They will be back in Kenya around July and leave again around late October. The park is made famous by the abundance of the big cats which are lions, leopards, and cheetahs, the great wildebeest migration, and the Maasai people who are well-known for their distinctive custom and dress.

Maasai Mara National Reserve stretches 1,510 square kilometers (580 square miles) and raises from 1,500 to 2,170 meters above sea level. It hosts over 95 species of mammals and 570 recorded species of birds. It’s about 270 kilometers from the capital Nairobi city and takes about from five to six hours by road or 40 to 45 minutes by flight. The road is great for the most part. There is a section from Narok town to Sekenani Gate that is dirt road but fairly good. The other road is through Lemek and Aitong town that is not good all day since it is very bumpy.

The Maasai Mara National Reserve is 1,510 square kilometers of the incredible wide-open landscapes and fertile riverine woodland following the looping meanders of the Mara and Talek rivers in Kenya. One glimpse is enough to explain its appeal which it is typically open savannah with a mass of amazing wildlife. Wherever you go in the vast Maasai Mara National Reserve, you will see a frequent amount of wildlife such as Maasai giraffe, baboons, warthogs, bat-eared foxes, grey jackals, spotted hyena, topis, impala, hartebeests, and wildebeest.

Elephants, buffaloes, zebras, and hippos are also found in great numbers. It is also common to see lions either basking after a heavy meal or surveying the plains for their next meal. Cheetahs and leopards are harder to spot but reasonably common. The ultimate action here is, without doubt, the annual wildebeest exodus known as the “Great Migration” in July and August when millions of these grass eaters move north from the Serengeti in search of lusher grass before turning south again in October.

Balloon trips are an entirely outstanding way of seeing the savannah plains teeming with wildlife. The Maasai Mara National Reserve balloon trips’ can be arranged at extra cost. Accommodation on this tour will be at one of two safari camps located in natural settings near the Maasai Mara National Reserve. You will stay in permanent tents with either twin or double beds. All tents feature en-suite bathroom areas with flush toilets and hot showers and are fitted with mosquito nets.

You will enjoy a pre-breakfast game drive. Then, you will return to the campsite for late breakfast and leave your campsite and proceed to Lake Nakuru arriving in the late afternoon. Dinner and overnight will be at a hotel in Nakuru.

The park lies in Central Kenya which is 140 kilometers north-west of Nairobi in Nakuru district of the Rift Valley Province. The ecosystem comprises of the lake which is surrounded by mainly wooded and bushy grasslands. The park supports a wide ecological diversity with flamingos (greater and lesser) and other water birds being the major attractions of the area. The ecosystem provides for about 56 different species of mammals including the white rhino, buffaloes, and a variety of terrestrial birds numbering nearly 450 species.

You will enjoy morning game drive. Then, you will depart to Nairobi and be dropped off at Comfort Inn Hotel to freshen up. After that, you will proceed to the Carnivore restaurant for dinner and return to the hotel for overnight stay.

You will be departing from Nairobi with a shuttle to Arusha. You will be arriving in Namanga Border for immigration procedures at the border. Then, you will proceed with your journey to Arusha and arrive in the afternoon. You will check in the hotel in Arusha for your dinner and overnight.

You will leave Arusha in the morning and proceed to Ngorongoro Crater arriving in time for lunch. There will be an afternoon game drive in the crater. Dinner and overnight will be at the campsite.

After breakfast and your final game drive, you will depart to Serengeti National Park via Olduvai Gorge. You will have lunch at Gorge Museum. After lunch, you will visit various sites of the gorge to see where the remains of the prehistoric man were discovered by the famous archaeologist Dr. L.S.B Leakey. You will then proceed to the Serengeti plains past Seronera and enjoy afternoon game drives there. Dinner and overnight will be at the campsite.

Your days will be spent in exploring the vast park rich with abundant wildlife. You also visit the northern part of the park, Seronera, with an opportunity of seeing the annual wildebeest migration. Dinner and overnight stay will be at Serengeti Seronera Campsite.

Originally created to preserve the path of the Great Migration, Serengeti National Park and its surrounding reserves cover nearly 30,000 square kilometers. Throughout the year, the huge wildebeest and zebra herds move in a clockwise direction around the plains in search of fresh grazing grounds. Seeing the migration in the Serengeti is really the best you can get from a Tanzania’s safari

The Serengeti National Park is one of the Africa's most famous park. Renowned for the two million strong wildebeest migration and incredible concentrations of predators, Serengeti National Park is a park that guarantees an exceptional safari. The vast endless grass plains (Serengeti plains connected to Maasai Mara National Reserve) are the richest grazing grounds on the continent which is the home to the largest herds on the planet and the highest concentrations of predators in Africa.

Serengeti National Park is one of the Africa’s most famous and Tanzania’s largest park covering 14,736 square kilometers which is adjoining with the Maasai Mara National Reserve in Kenya. With the wildebeest population of about two million and several other hoofed species (which include zebra, Thomson’s gazelle, impala, topi, Grant’s gazelle, Kongoni, Eland, Kirk’s dik-dik, klipspringer, roan, oryx, oribi, waterbuck, buffalo, giraffe and warthog), the Serengeti is sure to attract a string of prey such as lion, leopard, cheetah, hyena, golden jackals, and bat-eared foxes. Elephants are relatively scarce and the few remaining black rhinoceros are restricted to the Moru Koppies area.

Serengeti also offers rewarding bird viewing with ostrich and Kori bustard being common. Here, a variety of larks, finches, and raptors can be seen and the most distinctive small bird is the lilac breasted roller.

After breakfast, you will do your final game drive en-route and leave Serengeti National Park for Arusha with lunch en-route. In Arusha, you will have an overnight in a budget hotel which will be booked on bed and breakfast basis. Furthermore, you will have the opportunity to have dinner on your own.

Breakfast, lunch, and dinner will be served daily during this safari. Furthermore, a liter of mineral water will be provided per day for each person.

Please book your flight to arrive at Jomo Kenyatta International Airport (NBO). Transfer from and to the airport is included. Wild Safaris and Travel will pick you up from the airport or your hotel in Nairobi.