4 Days Lake Manyara, Serengeti, and Ngorongoro Crater Safari in Tanzania
This listing has no upcoming availability. Check out these similar experiences 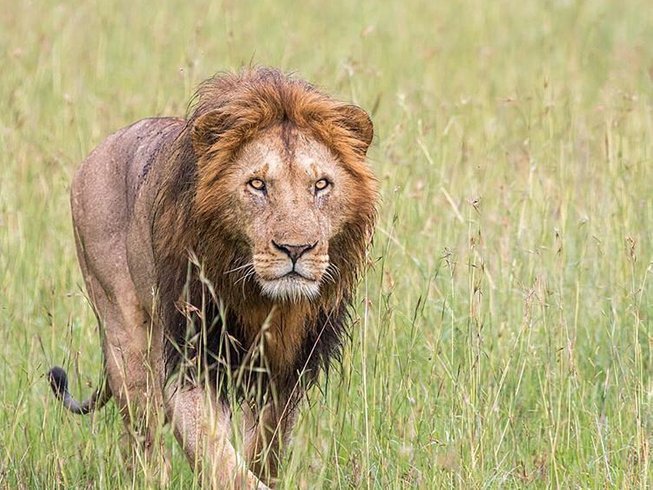 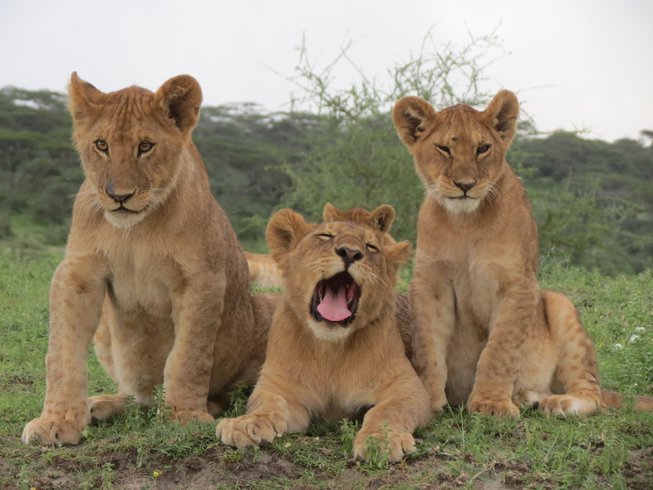 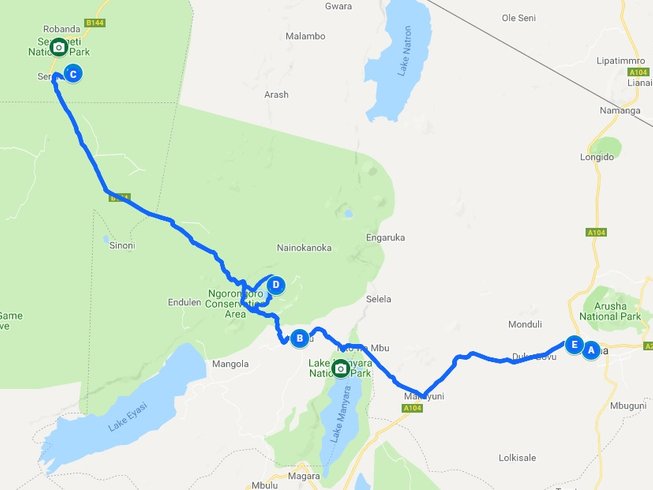 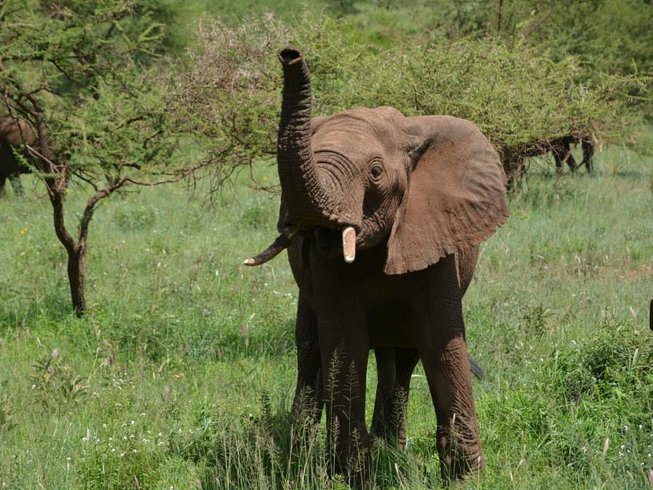 Your wishes and desires are important to Vervet Safari and Tours Tanzania. They make it their priority to listen to your ideas and suggestions when putting together a personalized itinerary for your dream holiday. Their safaris draw on the resources of highly respected professional guides who will lead you through three of the most famous wildlife spots in Tanzania, Ngorongoro Crater, Lake Manyara, and Serengeti national parks.

During the safari, you will be accommodated at Eileens Trees Lodge Inn, in Karatu, and Serengeti Heritage Camp.

Upon arrival, you will be picked up from Arusha or Kilimanjaro International Airport (JRO) and transferred to Lake Manyara National Park for a half day game drive. Later, depart the park before 6:00 p.m. and transfer to Eileens Trees Inn for dinner and overnight. Lake Manyara is very famous for its hot lake.

After breakfast, at 7:30 a.m., depart from Eileens Trees Inn for Serengeti via Ngorongoro Conservation Area. Arrive in Serengeti around mid-morning. The transfer from Ngorongoro to Serengeti will take two to three hours and will include an en-route game drive to Serengeti.

You will have a full day game drive to explore the beauty of the Serengeti and its landscapes. The migration makes Serengeti National Park special. After the game drive, depart the park for Serengeti Heritage Luxury Tented Camp for dinner and overnight.

Depart Serengeti after breakfast, at 6:30 a.m., and start the safari back to Ngorongoro Crater. There will be an en-route game drive. Arrive at the crater around mid-morning and go directly to the full day game drive. Inside the crater you can easily see the big five.

Pink flamingos and different types of birds can be found in the crater. A picnic lunch will be arranged close to the hippo pool, so the clients will enjoy their lunch while looking at what the hippos will be doing at that particular time of the lunch break. After lunch, which will last around 30 minutes, the game drive will resume. Around 6:00 p.m., you will depart the crater and return to the Eileen's tree inn lodge for dinner and overnight.

Note: The vehicles are six-seater custom safari Toyota Land Cruisers with pop-up roofs ideal for game viewing and sightseeing. The vehicles are well maintained to provide a maximum level of comfort and safety and are fitted with HF long range radios for easy communication.

The vehicles are fully equipped with first aid kits, fridges that will always contain some cold water and soft drinks, as well as guide books on wildlife, birds, and plants of Tanzania. Minivans will be used for the airport pick-up and drop-off.

French, German, or Spanish / Italian guides are available on request, with extra charges of 50 USD per day.

Nikolas is one of those safari guides with whom everyone connects. His easy humor and hearty laugh win you over every time, and then his sincere interest in wildlife and the protected areas comes through during the course of the safari. Nikolas has the rare skill of balancing well-informed interpretive guiding with good-natured sociability in all situations. He used to work at a hotel as a marketing manager. Born and raised around Karatu, after his secondary education, he attended a guide training for two years. He is very knowledgeable of flora and fauna.

Basili is a professional safari guide. He was born in the bush of northern Tanzania and grew up in Karatu, near Ngorongoro Conservation Area where his parents lived as farmers. Early treks into the bush with his father and uncle began his wildlife education. As his bush adventures continued, he developed a love of the wilderness that led him to choose a career as a safari guide. After completing his secondary education, he attended a wildlife college for guide training for three years. He worked with some of the leading travel companies in Tanzania.

From the entrance gate, the road winds through an expanse of lush jungle-like groundwater forest where hundred-strong baboon troops lounge nonchalantly along the roadside; the blue monkeys scamper nimbly between the ancient mahogany trees; dainty bushbucks tread warily through the shadows, and the forest hornbills honk in the high canopy.

The alkaline soda of Lake Manyara is home to an incredible array of bird life that thrives on its brackish waters. Pink flamingos stoop and graze by the thousands. Yellow-billed storks swoop and corkscrew on thermal winds, rising up from the escarpment, and herons flap their wings against the sun-drenched sky. Even reluctant bird-watchers will find something to watch and marvel at within the national park.

Lake Manyara’s famous tree-climbing lions are another reason to pay a visit to this park. The only kind of their species in the world, they make the ancient mahogany and elegant acacias their home during the rainy season, and are a well-known but rather rare feature of the northern park.

In addition to the lions, the national park is also home to the largest concentration of baboons anywhere in the world, a fact that accounts for interesting game viewing of large families of these primates.

Activities inside the Ngorongoro Crater itself are limited to game driving only. There are also picnic spots in the park. A full range of activities is however on offer in the wider Ngorongoro Conservation Area, including walking, trekking, excursions to Olduvai Gorge, and visiting the Maasai and other tribes.

The Serengeti ecosystem is one of the oldest on earth. The essential features of climate, vegetation, and fauna have barely changed in the past million years. The early man himself made an appearance in Olduvai Gorge about two million years ago. Some patterns of life, death, adaptation, and migration are as old as the hills themselves.

It is the great migration for which Serengeti is perhaps most famous. Over a million wildebeest and about 200,000 zebras flow south from the northern hills to the southern plains for the short rains every October and November, and then swirl west and north after the long rains in April, May, and June. So strong is the ancient instinct to move that no drought, gorge, or crocodile infested river can hold them back.

During the safari, you will be provided with meals and drinks according to the itinerary. Breakfast will be English, with eggs, bread, juice, and fruits. For lunch, you will be served green salad, rice, bread rolls, beef stew, roasted chicken, dessert, tea, coffee, and juice. Lunch boxes have sandwiches, fruits, chocolate, fruit juice, fried chicken, drinking water. For dinner, you will be served soup, salad, rice, potatoes, desert, tea, coffee, juice, drinking water.

Spa treatments are available upon request, at an extra cost.

Please book your flight to arrive at Kilimanjaro International Airport (JRO). Transfers from and to this airport are included. Vervet Safari and Tours Tanzania will pick you up from the airport.

Arrivals can also be at Arusha Airport (ARK) or the Namanga Border. Please notify Vervet Safari and Tours Tanzania and they will assist you.