8 Days Ultimate Wildlife Tour in Danube Delta, Romania
This listing has no upcoming availability. Check out these similar experiences 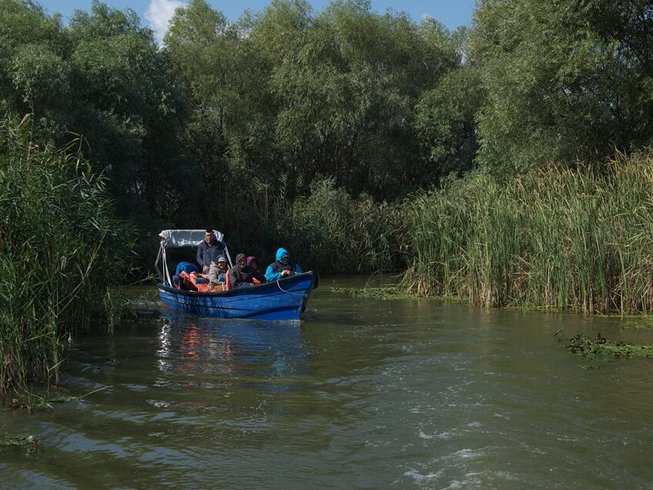 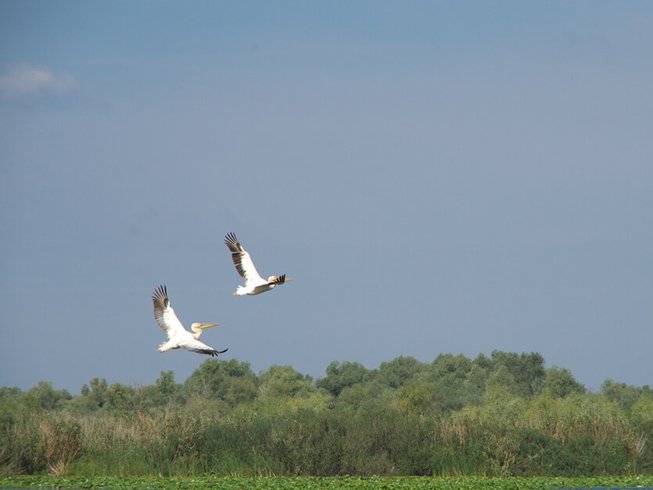 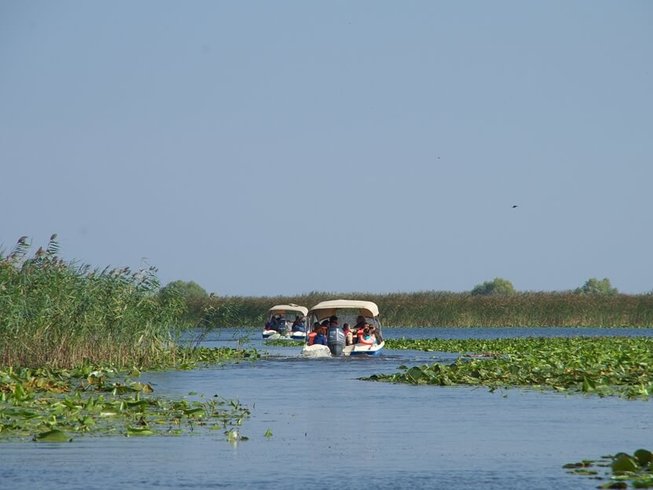 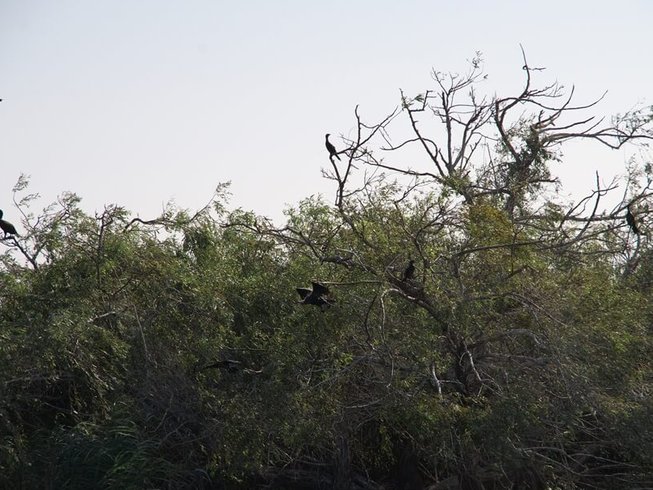 Login to save to your favorites
“Explore the most biodiverse areas in the world!”
​
Photo
all media

This Danube Delta tour is the ultimate adventure for nature lovers who get to spend the wildlife tour in one of the most biodiverse areas in the world. Birdwatching, nature observation, long boat rides, and traditional villages discovery are the day to day activities of this private tour. A labyrinth of reed, marshes, lakes, canals covered with water lilies, sand dunes and willow forests, the Danube Delta is declared a UNESCO World Heritage Site. Over 300 bird species live here and besides the species also found in Western Europe, the delta is one of the best places to observe colonies of cormorants and pelicans who nest here in large numbers. Moreover, in autumn and spring, there are countless birds that stop in the Danube Delta during their migratory routes. The tour follows different boat routes every day for you to discover and observe as much as possible this natural wonderland.

You will be accommodated in guest houses in Uzlina and Crisan.

Day 1: Arrival and transfer to Murighiol

Arrival at Bucharest Henri Coandă International Airport (OTP). If the flight arrives until noon, direct transfer to Murighiol for the boat ride to the Danube Delta. The boat transfer from Murighiol to Uzlina is the start of your Danube Delta tour as your local guide will take you across reed canals and lakes, on less transited routes.

You’ll find out interesting facts about the biodiversity of the region, the third highest in the world, you’ll learn how the delta appeared and how it keeps changes and you’ll observe first-hand local life, whether its fishermen or some of the many bird species that live here. Dinner will be served at the guest house.

In case of an afternoon or evening arrival, the duration of the tour increases with one day because the first night will be spent in Bucharest

Day 2: The forest and village of Caraorman

Boat ride across several lakes and canals to Caraorman, a small and traditional village located in an isolated world, surrounded by waters.

The main attraction is the subtropical forest Caraorman where you’ll see some of the highest sandbanks in Romania and trees and plant species that are more common in a Mediterranean climate than in a temperate one. The biggest oak tree from the Danube Delta - four meters round and 400 years old - grows here. Also, a few pairs of the rare white-tailed eagle have been spotted in the forest. You will have a Ukrainian style lunch in the village. Then, have a birdwatching on the boat ride back to the guest house where dinner will be served.

Day 3: Where the Danube meets the Black Sea

Return on a different itinerary to Uzlina, another few hours observing birds while crossing the reed islands and water lilies covered canals. Dinner will be served at the guest house.

Boat transfer in the morning to Crisan where you will be accommodated for the following days. Birdwatching along the route that will take you from Uzlina canal across three more lakes and two canals until reaching Sulina branch and the village of Crisan. Leisure afternoon where you can simply relax at the guest house, enjoy kayaking or fishing. Dinner will be served at the guest house.

Another traditional village, this time Mila 23, where some of the most important sports champions of Romania were born. In fact, Mila 23, Caraorman and Crisan gave 24 world champions. This fishermen village, inhabited mainly by lipoveni, an ethnic group based on the descendant of Russian refugees that fled the Russian Empire during the 18th-century religious persecutions, is only reachable by water.

The old fishing culture of the Danube Delta is still tangible in this small strip of land. Lunch in the village and afternoon boat ride to Crisan. More birdwatching on the two lakes and four canals crossed. Dinner will be served at the guest house.

Day 6: One day in Sulina

Boat ride to the small city of Sulina, the most eastern point of Romania. Half of the day is spent visiting Sulina, including the Cosmopolitan Cemetery where people of 21 distinct nationalities are buried in three distinct sections: Christian, Muslim, and Jewish. Afternoon at the beach and boat ride in the evening to Crisan, just in time for dinner.

The headquarters of the European Danube Commission in the 19th century, Sulina was back then one of the most ethnically diverse cities of the Old Continent. Mentioned for the first time in a document more than 1,000 years ago, Sulina was in the 14th century a Genovese port and almost 500 years later became a free port on the Danube River.

This role brought commercial prosperity and development as well as a guaranteed neutrality. At the end of the 19th century, the Greeks were the largest ethnic group, followed by Romanians, Russians, Armenians, Turks, Jews, Germans, Italians, Bulgarians and many more small groups of nationalities from all over Europe. In total, 10 countries had diplomatic representatives in Sulina where English, French, and Greek were the main used languages.

The religious life was as varied as its inhabitants, four Orthodox churches: two Romanians, one Russian and one Armenian, a Jewish temple, an Anglican church, a Catholic church, a Protestant church, and two mosques.

Boat ride to Murighiol, two to three more hours to observe wildlife and enjoy the magic of the Danube Delta. Car transfer from Murighiol to Bucharest.

During this wildlife tour, you will visit the village of Caraorman, Mila 23 Village, and the small city of Sulina.

Romania is one of the most diverse countries in Europe, a complex travel destination where you can explore ancient ruins and large medieval fortresses, walk in some of the oldest forests of Europe or hike in the last wilderness areas of the continent.

With a Latin language spiced with Slavic influences, a mixed Occidental and Balkan culture, its incredible nature and hundreds of cultural and historical monuments, Romania may not be what you’re used to, but it will surely enchant you. Leave behind all the stereotypes about Romania you may have stumbled upon and open your mind and heart for a one of a kind country and its warm people.

Nature in Romania is truly unique as you get to explore a variety of landscapes that no longer exist in other parts of Europe. The balance between mountains (28%), hills and plateaus (42%) and plains (30%) makes Romania a great destination whether you like to hike or simply enjoy the walk in nature.

Key facts about nature in Romania:

Romania’s attractions are diverse and separately or together they make a great start for any kind of vacation, whether you’re interested in adventure, culture or more urban-style fun. During your stay in Romania, you can easily combine visits to castles and palaces with nature-based activities at all levels of intensity.

Romania’s UNESCO World Heritage Sites are a great starting point for a cultural journey across the country. These monuments are spread around Romania and you can choose between a complete tour that will require around 12-15 days or a shorter tour focusing on the sites that interest you the most.

The UNESCO Sites in Romania are the Dacian fortresses from Orastie Mountains, the fortified churches of Transylvania, the painted churches from Bucovina, Horezu Monastery, the wooden churches from Maramures, Sighisoara’s historical city and the Danube Delta.

Romania’s history and geographical position have created a complex multicultural heritage easily observed in the architecture variety, the presence of strong ethnic groups and even the delicious culinary recipes that change according to the historical region. This multicultural diversity is an attraction by itself and is best observed visiting at least two historical regions, for instance, Transylvania and Bucovina. Romania has many castles and palaces, beautiful museums, countless medieval fortresses, and ancient ruins.

The traditional countryside is one of the most favorite attractions in Romania. Where else in Europe would you find so many rustic houses, idyllic landscapes, and kind people?

Romania’s villages are more than worth a visit and even a full vacation if you want to relax with your family, breathing fresh air, eating only home cooked food with fresh ingredients and uncovering a lost world of traditions that fascinates even Prince Charles who visits frequently the traditional houses he owns in Transylvania.

The Carpathians and the Danube Delta are the highlights of Romania’s natural attractions. Each of them conserves a rich biodiversity and rare landscapes with true wilderness sights. While the Danube Delta is mainly accessible by boat, the Carpathians are best discovered on foot choosing one or more of their many hiking trails that vary from easy walks for all the family to challenging tours of their highest peaks.

Romania’s major cities are not only packed with must-see cultural attractions, but they are also the right place if you’re looking to have fun while enjoying some of the lowest prices in Europe.

From Bucharest, the chaotic and dazzling capital, to Transylvania’s highlights - Brasov, Sibiu, and Cluj - western Romania’s beautiful Timisoara or Iasi in the eastern part, you have plenty of choices for some fun memorable urban adventures.

The city tours will guide you and help you discover the history, the popular attractions, but also the hidden gems of Romania's most beautiful and interesting cities and towns.