12 Days Camping Safari in Uganda
This listing has no upcoming availability. Check out these similar experiences 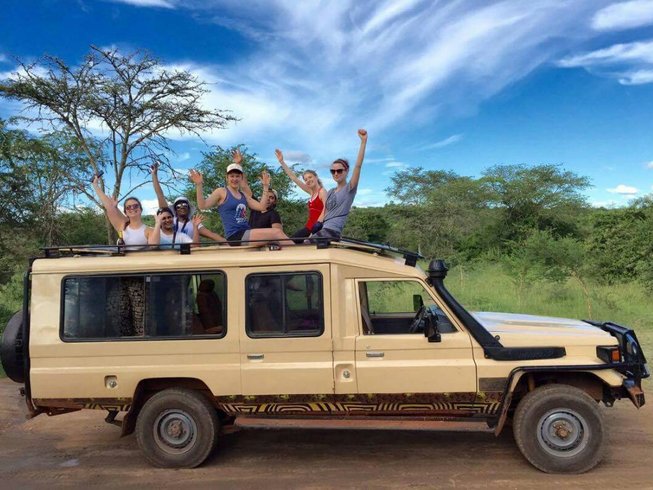 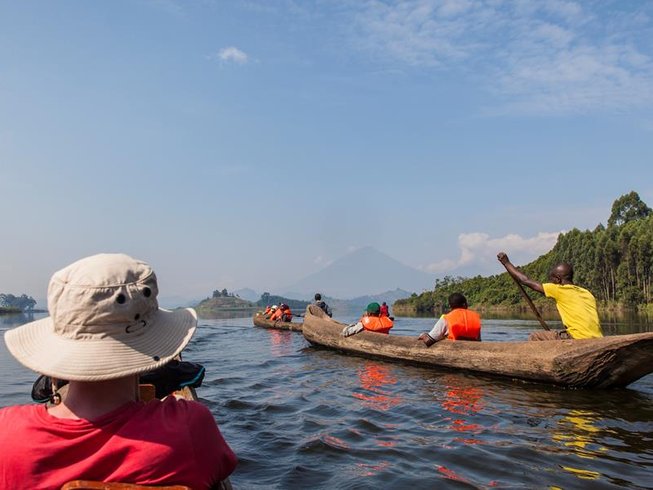 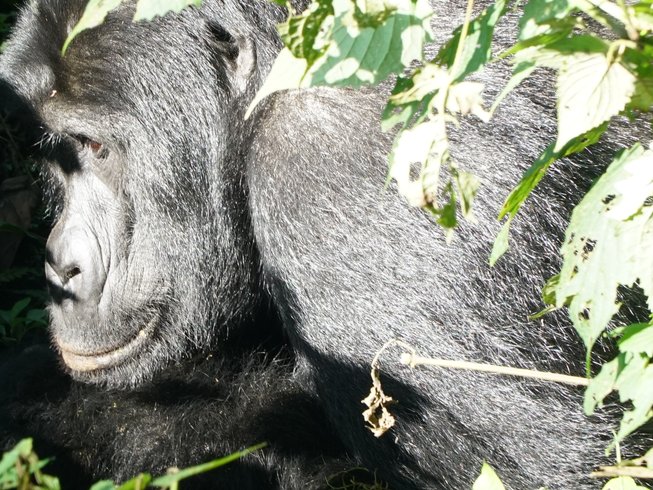 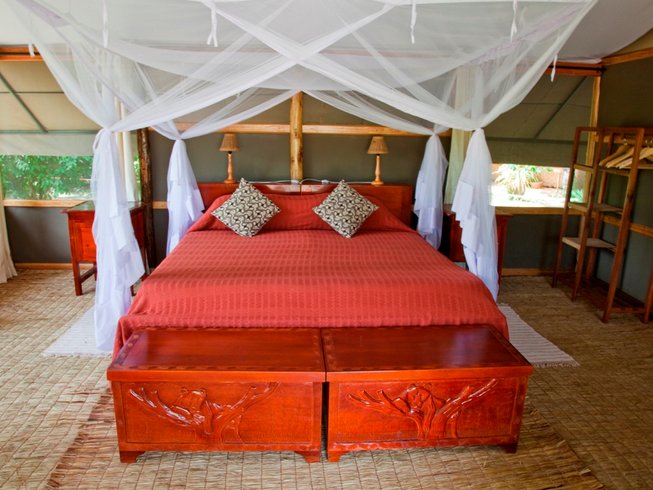 Login to save to your favorites
“Enjoy the exotic getaways in Uganda!”
​
Photo
all media

For those looking for a mix of camping and luxury, here is a camping safari taking you to the uncharted territory of Uganda by road. You will visit the highlights of Southwestern and Western Uganda, such as Kibale National Park, Queen Elizabeth National Park, and Bwindi Impenetrable National Park. Combine excellent 4x4 wildlife viewing, boating on the Nile, meeting local people, and tracking mountain Gorillas! This is your chance to be on the beaten track on this tour.

Day one of this safari is a camping night on the shores of Lake Victoria in Entebbe. On the following day, you will stop over at the Equator for lunch. This tour takes you to the chimpanzees in Kibale National Park, then a relaxed game drive and boat trip in the Queen Elizabeth National Park.

You will, then, move to Ishasha to look at the wondrous tree-climbing lions before finally climaxing in the Bwindi Impenetrable National Park to trek the mountain gorilla. What a way to explore your senses and Uganda. On day 12, The Safari Chapter Uganda will bring you back to Entebbe for your outward flight. The Safari Chapter Uganda's goal is simple. It is to give you a complete understanding of Uganda: why it as it is and why it exists as the Pearl of Africa.

You will arrive in Entebbe and transfer to the shores of Lake Victoria for overnight camping.

You will enjoy a game drive in Kibale National Park. The overnight camping will be at Bigodi campsite near the park boundary.

You will enjoy a morning chimpanzee walk in Kibale National Park. In the afternoon, you will depart for crater lakes in the region of Queen Elizabeth National Park. You will camp for three nights at Mweya Safari Lodge, overlooking Kazinga Channel.

Game viewing and birding in northern Queen Elizabeth National Park are your main agenda. Take a boat trip up the Kazinga channel, visit salt works in Katwe, and observe the bats, pythons, and forest cobras in the bat and hunters caves!

You will have chimpanzee tracking in Kyambura Gorge, then continue to southern Queen Elizabeth National Park. You will camp for two nights by the Ishasha river with only Hippos for a company.

You will enjoy wildlife viewing on the Ishasha plains in search of tree climbing lions.

You will drive to Buhoma camp in Bwindi Impenetrable National Park to stay for two nights.

Gorilla tracking will be the highlight of the day.

You will drive to Lake Bunyonyi for afternoon relaxing on the shores of the lake.

There will be a morning walk and canoeing before returning to Entebbe to spend your last night at Kisubi camping.

You have an optional Kampala tour then transfer to airport for flight home.

Uganda is a land of contrasts. In half a day, you can drive from mist-shrouded volcanic mountains to hot hazy savannah, dappled with wildlife. Serene undulating hills of tea plantations, lush but ordered, give way to tangled jungle and rainforest with the musical accompaniment of chaotic, cacophonous birdlife.

Uganda is alive with these contrasts: the tiniest sunbirds, iridescent in the morning light, the massive lumbering yet silent elephant disappearing like a vapor behind the trees, the chimpanzees crashing about the forest canopy, and the lugubrious gorilla chewing thoughtfully in the bamboo thicket. There are the Nile, twisting its way north like a shimmering ribbon, through arid semi-desert scattered about with rocky kopjes, snow-capped peaks, tropical sandy freshwater beaches, and smiling faces everywhere. It’s all here, a feast for all the senses.

Called as the “pearl of Africa”, Uganda is a landlocked gem with the Lake Victoria, one of the world's largest lakes. It is also the starting point of the mighty river Nile and home to the snow-capped Rwenzori mountains and the dense rain forests of central Africa. These diverse landscapes have some of the best birding in Africa and are home to an unusually high number of rare wildlife species, including more than half the world’s mountain gorillas.

Gorilla tracking through the Bwindi Impenetrable National Park is an obvious highlight to any Uganda safari. However, Uganda is not a one-hit wonder. The awe-inspiring Murchison falls on the Nile, the endless savannah in Queen Elizabeth National Park, and the vast arid park in Kidepo valley offer fascinating varied safari experiences with good populations of lions, leopards, elephants, buffalo, giraffe, as well as chimpanzees and the incredible shoe bill stock.

The Kibale-Fort Portal area is one of Uganda’s most rewarding destinations to explore. The park is home to 13 species of primates including the red colobus, chimpanzees, and L'Hoest's monkeys as well as 70 mammal species. This park has one of the greatest primate densities in the world.

Botanists and butterfly lovers will also enjoy the network of shaded forest trails and with no less than 375 different recorded bird species. It is a bird lover’s paradise. For those who are extremely fortunate, you may get to see the elusive forest elephant. The park is also home to other forest dwellers including buffalo, giant forest hog, and antelope.

Set against the backdrop of the jagged Rwenzori Mountains, the park’s magnificent vistas include dozens of enormous craters carved dramatically into rolling green hills, panoramic views of the Kazinga Channel with its banks lined with hippos, buffalo, and elephants, and the endless Ishasha plains, whose fig trees hide lions ready to pounce on herds of unsuspecting Uganda Kob.

As well as its outstanding wildlife attractions, Queen Elizabeth National Park has a fascinating cultural history. There are many opportunities for visitors to meet the local communities and enjoy storytelling, dance, music, and more. The gazetting of the park has ensured the conservation of its ecosystems, which in turn benefits the surrounding communities.

The Bwindi Impenetrable National Park (BINP) is in south-western Uganda. The park is part of the Bwindi Impenetrable Forest and is situated along the Democratic Republic of the Congo (DRC) border next to the Virunga National Park and on the edge of the Albertine Rift. Composed of 331 square kilometers (128 square miles) of both montane and lowland forest, it is accessible only on foot. BINP is a United Nations Educational, Scientific, and Cultural Organization-designated World Heritage Site.

Species diversity is a feature of the park. It provides habitat for 120 species of mammals, 348 species of birds, 220 species of butterflies, 27 species of frogs, chameleons, geckos, and many endangered species. Floristically, the park is among the most diverse forests in East Africa, with more than 1,000 flowering plant species, including 163 species of trees and 104 species of ferns. In particular, the area shares in the high levels of endemism of the Albertine Rift.

The park is a sanctuary for colobus monkeys, chimpanzees, and many birds such as hornbills and turacos. It is most notable for the 340 Bwindi gorillas, half of the world's population of the critically endangered mountain gorillas.

An optional Kampala tour is available before your transfer to the airport.