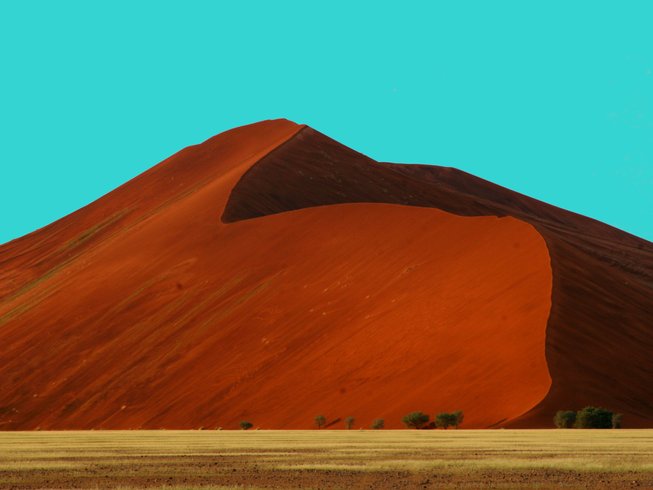 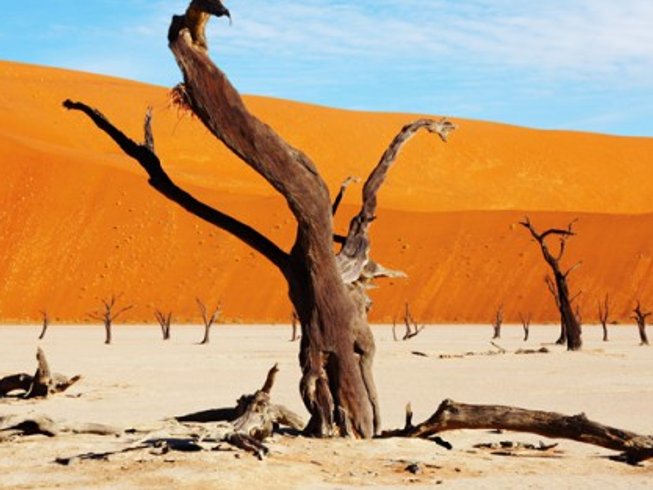 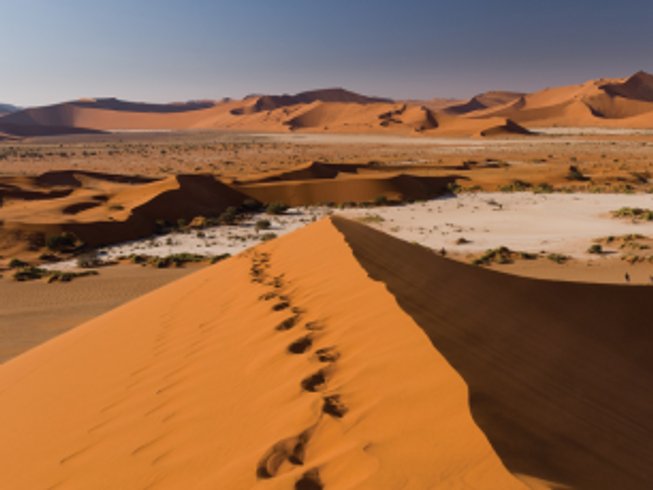 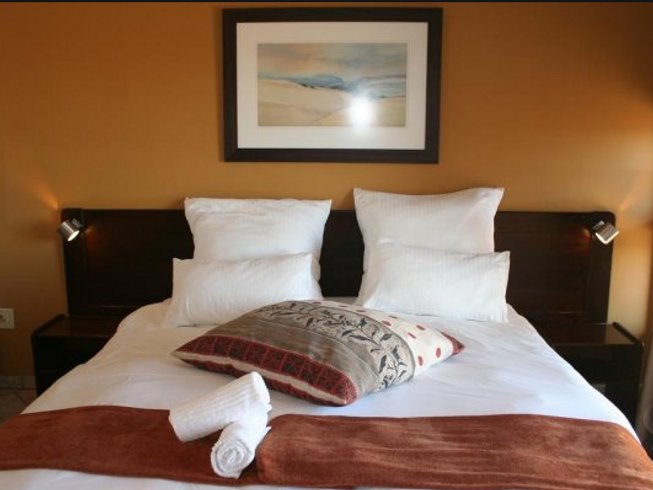 Login to save to your favorites
“Experience the world's oldest desert!”
​
Photo
all media

This tour will allow you to experience the astonishing contrasts of the Namib, including the famous Deadvlei surrounded by some of the tallest dunes in the world. Marvel at the remainder of the tree skeletons believed to be around 700 years old. You’ll have the opportunity to view unique desert-adapted animals that roam the dry valleys and star-shaped dunes of the area.

During this safari, you will be accommodated at Namib Naukluft Lodge or a similar lodge and at Soft Adventure Camp or similar campsite for two nights.

Day 1: Windhoek to the Namib Desert

You will be met at your hotel at approximately 2:00 p.m. (during Namibian wintertime at 1:00 p.m.). Depart from Windhoek and travel to the Küpferberg Pass. You will drive through cattle farmland and hilly landscapes with splendid views of fertile valleys. The journey continues via the scenic and steep Spreetshoogte Pass. Enjoy an undisturbed view from the top of one of the steepest passes in Namibia!

A comfort stop will be made at the small settlement of Solitaire, before continuing to the beautifully set private nature reserve, NamNau Habitat, which hosts a variety of desert-adapted game like Springbok, Ostrich, earth wolf, bat-eared fox and much more. Dinner will be served in the evening.

Alternatively: Swakopmund to The Namib Desert

You will be met at your hotel at approximately 2:00 p.m. (during Namibian wintertime, at 1:00 p.m.). Depart from Swakopmund and travel via Walvis Bay, Namibia’s largest commercial port. You might collect additional guests at the Walvis Bay lagoon, before continuing through the Namib Naukluft Park, which is considered to be the largest conservation area in Namibia.

You will drive past the Vogelfederberg and travel through the Kuiseb and Gaub Passes before arriving at the small settlement of Solitaire, for a comfort stop. Arrive in the late afternoon at the private nature reserve, NamNau Habitat, which hosts a variety of desert-adapted game like Springbok, Ostrich, earth wolf, bat-eared fox, and much more. Dinner will be served in the evening.

Enjoy early morning coffee and tea before departing for Sossusvlei, a fascinating world of ecology and unearthly geography. The route travels along the Tsauchab dry riverbed, which has found a way through the dunes until it reaches the vivid white clay saltpan, called Sossusvlei. After a good rainy season, approximately every seven to ten years, the Tsauchab River runs in full flood and fills the Vlei with water, offering sensational scenery with prolific birdlife.

The early morning sun offers spectacular pastel colors in the star-shaped dunes. The first stop will be at Dune 45, before continuing to Sossusvlei. Climb one of the dunes (there will be plenty) and you might be overwhelmed by the sight of the dynamic and living desert! Breakfast will be served as a picnic under one of the shady camel thorn trees.

Afterward, walk over patches of dunes until you reach the base of the ‘Dead Vlei’, another pan where water once flowed, but all that remains today are the skeletons of trees. Visit the rugged Sesriem Canyon before returning to the lodge for lunch. In the afternoon, join a guided nature drive to the Marble Mountain (drinks for own account) or relax on your veranda and enjoy a spectacular sunset. Dinner will be served in the evening.

Day 3: The Namib Desert to Windhoek

After a healthy breakfast, depart for Windhoek, traveling via the Remhoogte Pass, which boasts a variety of vegetation. It’s also possible to travel via the Spreetshoogte Pass, depending on weather and road conditions. Arrive in Windhoek at approximately 12:30 p.m.

Alternatively: The Namib Desert to Swakopmund

After a healthy breakfast, depart to Swakopmund, traveling via the Gaub and Kuiseb Passes. You will pass Namibia’s largest Nature Reserve, the Namib Naukluft Park, and an internationally renowned desert research station at Gobabeb (not accessible to the public). You will travel past the Vogelfederberg and will drive through Walvis Bay, Namibia’s largest commercial port, before arriving in Swakopmund at around 12:30 p.m.

This safari tour will take place in Sossusvlei Desert, in the southern part of the Namib Desert. The dramatic wind-formed dunes in this area are among the highest sand dunes in the world. It's a unique place in the world, where you can appreciate the vast soul of the Namibian desert and the delicate balance of life that is sustained by little more than the fine Atlantic fog. Discover breathtaking desert vistas with sands that change color from deep ochre to mauve before your eyes.

During your stay, you will be served with two breakfasts, one lunch, and two dinners.

Please book your flight to arrive at Hosea Kutako International Airport (WDH). Transfer from and to this airport is available upon request.