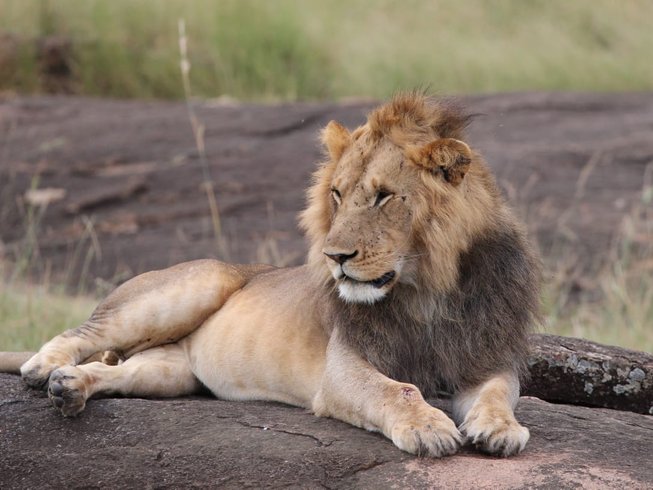 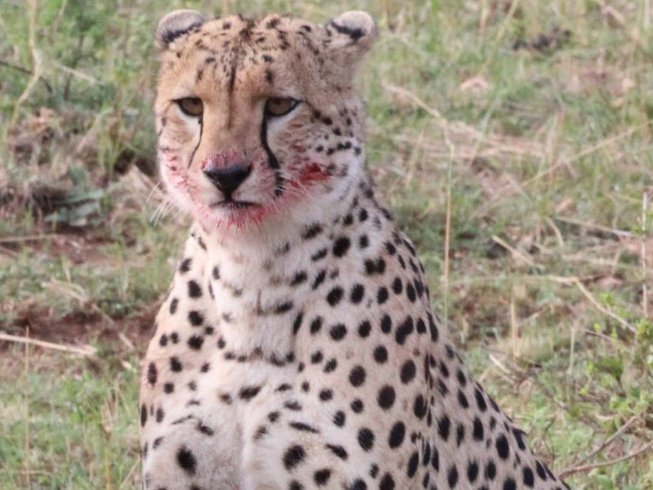 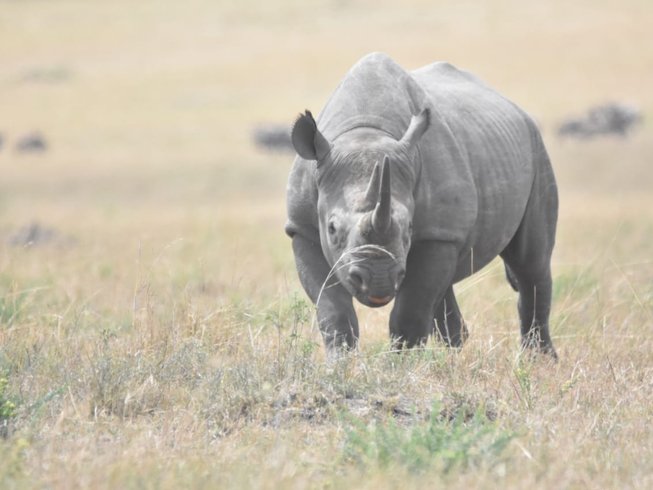 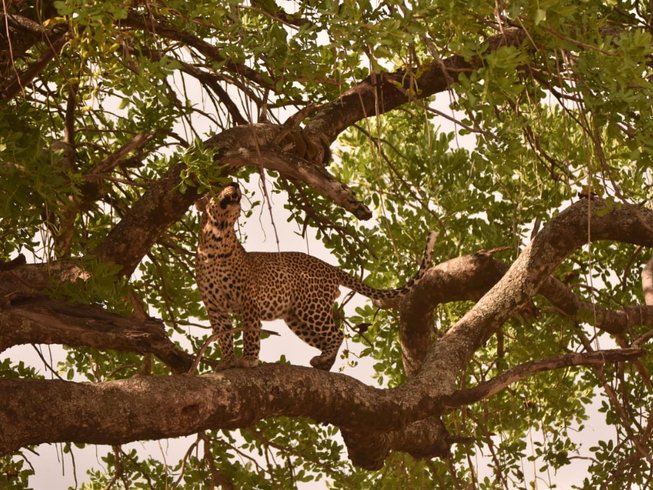 This seven-day safari takes you to some of Kenya’s best parks which include Amboseli, Aberdare, Lake Nakuru National Park, and the Masai Mara National Reserve. During the safari, you will traverse the Great Rift Valley and sisal plantations and experience Kenya like never before.

The following are the suggested accommodations during the safari:

Arrive at Jomo Kenyatta International Airport (NBO). Met by the representative and briefed on your safari. Depart for Amboseli National Park, arrive in time for lunch. Enjoy an afternoon game drive in this scenic and wildlife-rich park. Dinner and overnight at the camp.

Early breakfast. Depart with picnic lunch for a full day game viewing. In the early morning you have an opportunity to see the peak of the mountain weather permitting.

Arid-looking as Amboseli has historically supported both game and the Masai that kept their herds of cattle here. It is thanks to the waters that run off Africa's greatest mountain that the apparently dry Amboseli, Kenya's first game sanctuary is able to support its wildlife.

Mount Kilimanjaro broods high over Amboseli. The mountain now provides water for the park, wonderful views and, of course, the most glorious background for animal photography. Dinner and overnight at the camp.

Breakfast at the lodge. Depart for Aberdare National Park and drive through Kikuyu farmland before reaching the foothills of Aberdare Ranges where much coffee and tea is grown. Lunch en route.

On arrival at the base hotel, drop the excess luggage and drive through the forest to reach your hotel where the night is spent watching the never-ending pageant of wildlife which visits the floodlit waterhole and saltlick below. Dinner and overnight at the Lodge.

Breakfast at the lodge then check out and drive to the floor of the Great Rift Valley to Lake Nakuru National Park. Arrive in time for lunch. In the afternoon, enjoy a game drive in this beautiful park.

Lake Nakuru National Park is one of the smallest but best game parks in Africa. The soda lake is home to a sea of pink flamingos and the surrounding parkland offers the closest view you're likely to get of a white rhino (they tend to gather in front of the acacia forest at the southern end of the lake).

Other park residents include leopards, buffaloes, and hippos. The park is best explored in the golden sun of the late afternoon. You can circle the lake clockwise in your van then drive to the top of Baboon Cliff for a stunning sunset view. Dinner and overnight at the lodge.

Early breakfast. Depart for Masai Mara Game Reserve. Arrive in time for lunch. In the afternoon proceed for a game drive in this world-famous game reserve. At dusk return to the lodge. Dinner and overnight at the lodge/camp.

An early morning balloon safari is available as an option at 450 USD per person. The balloon launches at 6 a.m. and takes one hour. On landing you will be welcomed with a champagne bush breakfast.

Full day game viewing whereby you leave the camp/lodge after breakfast with picnic lunch. The Mara is the land of African legend: Lions are abundant throughout the park, as are the elephants, giraffes, and a variety of gazelle species and zebra. Cheetah and leopard are also regularly seen and, less commonly, rhino.

The annual wildebeest migration, one of nature’s few remaining wildlife spectacles, occurs in the Mara from July to September where the big animals and their predators are to be present in abundance during the time frame of this trip. Several species of Bee-Eater, the flying rainbow that heads the list of the Mara’s birds, occur in the reserve.

As well as wildlife, the Maasai Mara is also home to many members of the colorful Maasai tribe who may be seen around the borders of the park – Morans (warriors) loping across the plains, young boys herding goats, or elders grouped under a tree discussing matters of the day. Dinner and overnight at the Lodge / camp.

Early morning game drive. Breakfast at the lodge / camp. Depart for Nairobi. A stopover is provided at Narok Town to browse in the bustling, vibrant Masai markets to buy curios and handicrafts. Lunch en route (own cost). On arrival in Nairobi proceed for a complimentary city tour. Later transfer to the airport for final departure. End of safari.

This shallow soda lake has been famous for its flamingos but has also retained its reputation as an ornithologists’ delight with more than 400 species of bird found here. You may get out of the vehicle at the lakeshore to get a closer look at the birds.

The nearby cliffs offer sightings of baboons, birds of prey and scurrying hyraxes, as well as great views of the park. The national park covers 180 square kilometers and is home to warthogs, waterbuck, buffaloes, reedbucks, and the occasional leopard as well as white and black rhinos which were introduced to the park some years ago.

The Aberdare National Park, with an area of 767 square kilometers, covers the higher areas of the Aberdare Mountain Ranges of Central Kenya, from an altitude of 1829 meters to 4001 meters above sea level. The topography is quite diverse with deep ravines that cut through the forested eastern and western slopes.

Animals easily observed in the park include; the Black Rhino, leopard, baboon, black and white Colobus monkey and sykes monkey. Rarer sightings include those of lions, the golden cat, and the bongo- an elusive forest antelope that lives in the bamboo forest.

Animals like the eland and spotted and melanistic serval cats can be found higher up in the moorlands. Visitors can also indulge in picnics, trout fishing in the rivers and camping in the moorlands. Bird viewing is rewarding, with over 250 species of birds in the park, including the Jackson's Francolin, sparry hawk, goshawks, eagles, sunbirds, and plovers.

Masai Mara is situated in south-west Kenya and is one of Africa’s Greatest Wildlife Reserve. Together with the Serengeti National Park in Tanzania, it forms Africa’s most diverse, incredible and most spectacular eco-systems and possibly the world’s top safari big game viewing eco-system. It hosts over 95 species of mammals and 570 recorded species of birds.

It’s about 270 kilometers from the capital Nairobi City and takes about 5-6 hours by road or 40-45 minutes by flight. The road is great for the most part, there is a section from Narok town to Sekenani Gate that is dirt road all-weather, but fairly good.

The best time to visit And see the wildebeest migration is between July and October. Although it is not guaranteed that the wildebeest get to Maasai Mara, it has yet to let previous guests down.

Also, December to February is a great time as it is dryer and good for the Big Cats. Note: The Maasai Mara is an all year round destination with the big cats, and all the big games still in the Maasai Mara Ecosystem.

Full board meals and mineral water are included in the price.

A trip to Masai village and balloon safari are available upon request with an additional cost.