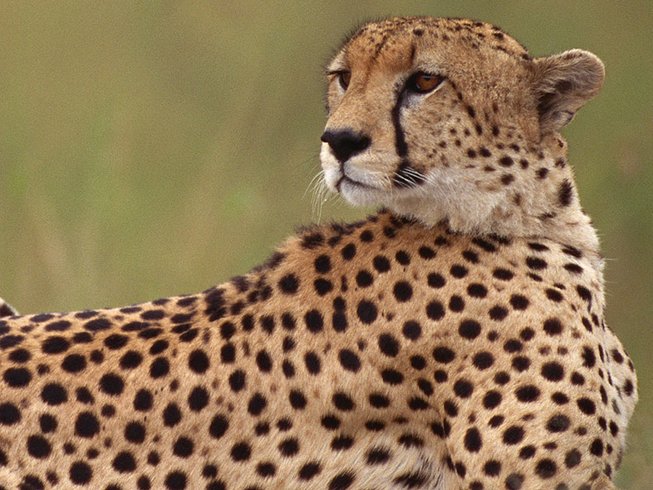 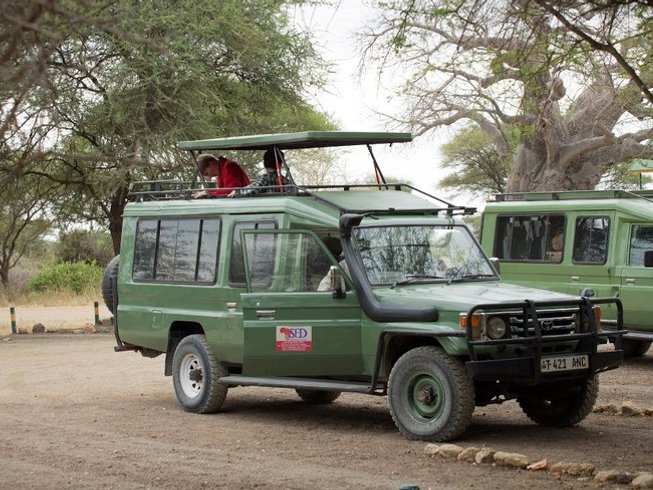 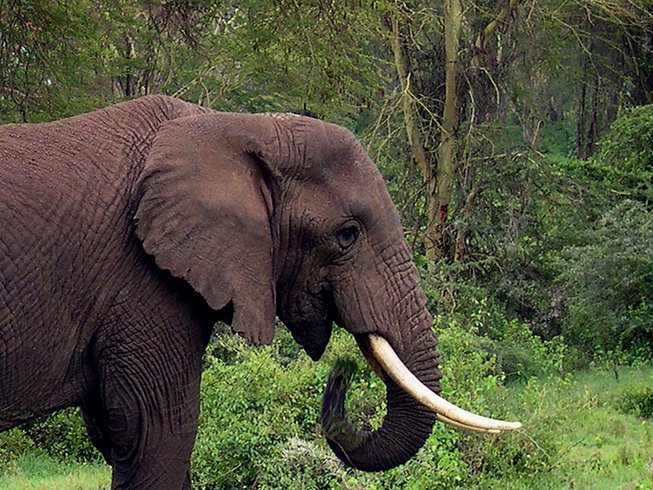 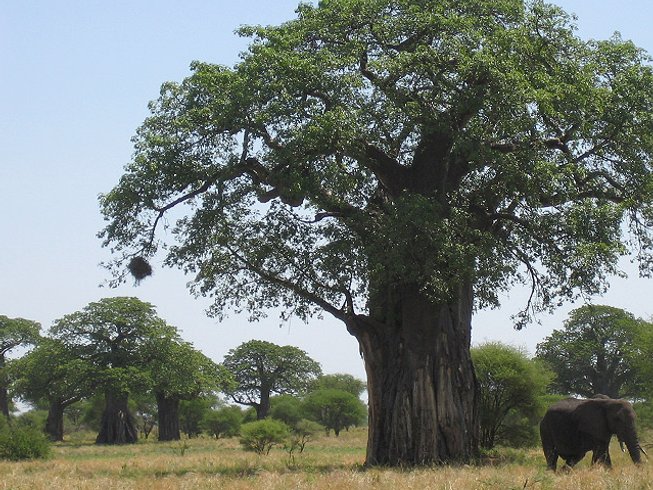 Login to save to your favorites
“A high-quality and affordable African safari!”
​
Photo
all media

Experience the ‘Big Five’ areas of Tanzania on this 6-day safari! Starting with Tarangire National Park, Lake Manyara National Park, Serengeti National Park, and then Ngorongoro Crater, the tour will take you to visit and explore 4 of Tanzanian northern parks. All the parks are home to small and large animals including birds and reptiles. Pack your belongings and experience the real African safari!

During this safari, you will be accommodated in campsites. You will stay at these following accommodations throughout your safari:

After breakfast, you will be picked up from your hotel in Arusha at 08:30 and then drive to Tarangire National Park. You will spend a full day exploring Tarangire, one of Tanzania’s ‘secret’ wildlife havens, teeming with large populations of elephant, predators, and their fleet-footed prey. Your dinner and overnight stay will be at Twiga Campsite.

In the morning after breakfast, you will be transferred at 08:30 from Tarangire to Manyara for a full day game viewing. You will enter the Great Rift Valley and Manyara National Park later. The lake’s waters sustain a bountiful avian population, including flamingos as well as numerous pods of hippos. Your dinner and overnight will be at Manyara Twiga Campsite.

After breakfast at 08:30, you will drive from Manyara to Serengeti National Park for a full game viewing. Your skilled driver knows the Serengeti and where to locate even the most elusive of animals. Morning and afternoon daily wildlife viewing will afford you the opportunity to track and photograph the Big Five. You will be doing game drives while tracing the direction of the wildebeests. You will spend all your fourth night at the lodge in Serengeti. Your dinner and overnight will be at Seronera Campsite.

After breakfast, you will go for a mid-morning game drive and viewing in the Seronera Valley. The presence of permanent water in the central Seronera Valley ensures a year-round game-viewing. As well as a good resident game, during the dry season, the cheetahs are forced to come out in the plains and congregate in extremely high numbers as there is enough prey.

Your lunch break will be in your campsite. In the late afternoon, you will head south where you will see endless plains as the name suggests in the native language and various game scattered all over. You can see larger mammals like giraffes, rhinos, elephants, and hippopotamus, nearly 500 species of bird including vultures, storks, and ostrich, as well as reptiles such as crocodiles, a number of species of snakes, and lizards. Your dinner and overnight stay will be at Seronera Campsite.

After breakfast, you will have a game drive with your packed lunch en-route to Ngorongoro Conservation Area. It is your option whether you will pass by Olduvai Gorge, a historical site whereby the early man lived or you can pass by the Maasai Boma if you are interested in the real African life tradition and culture. Your dinner and overnight will be at Simba Campsite.

In the morning after breakfast, you will descend into the crater for a half day crater tour at 07:00. At 12:15, you will ascend the crater and drive to the lodge for a hot lunch. After lunch, you will drive back to Arusha town. If the departure flight will leave in the evening hours, you will drive directly to Kilimanjaro International Airport (JRO), but if the departure flight will leave in the mid-day hours you will have to spend this night in Arusha town. The accommodation will be on your account.

The national park is located in the north-eastern part of Tanzania and it’s somehow closer to the Ngorongoro Crater. It’s also close to Lake Manyara which is also a part of the ecosystem for the Tarangire National Park. One of the most noticeable things on entering the park are the baobab trees that rise up from the grass. With their massive trunks, they are instantly recognizable. There are animals that usually move northwards of the park during the wet season including the wildebeests, zebras, Thompson’s gazelles, buffalos, elands, and hartebeests. The elephant population in this park was estimated to be around 6000 in 1987, but numbers are believed to have fallen since then due to poaching.

The number of birds recorded in Tarangire National Park has been estimated at approximately 300. These include migrants that fly south to spend October to April away from the winter of the northern hemisphere. Here, you may spot various species of herons, storks and ducks, vultures, buzzards, sparrowhawks, eagles, kites, and falcons, as well as ostriches. Other areas of interest within the park include the Lake Burungi circuit, the Lemiyon area, the Kitibong Hill circuit and the Gursi and Lamarkau circuit.

At certain times of the year, Lake Manyara is home to thousands of flamingos attracted by the lake itself, which forms a shimmering pink zone around the lake shore. Other birds found here include ostriches, egrets, herons, pelicans, and storks. Also seen are African spoonbills, various species of ibises, ducks, and the rare pygmy geese. The most noticeable of the landscape within this park are the very impressive baobab trees with their huge trunks.

In this park, you can see a million wildebeest. Each one is driven by the same ancient rhythm, fulfilling its instinctive role in the inescapable cycle of life. The 14,763-square-kilometer park is the second largest park in Tanzania after Selous National Park. The park is located near the Kenyan border besides Maasai Mara National Reserve. In fact, the Serengeti National Park shares a border with the Maasai Mara National Reserve. Its location is on the north-eastern side of Tanzania.

Serengeti is perhaps most well known for the annual migration that takes place across the great savannah plains. This is a phenomenal sight, thousands upon thousands of animals, particularly wildebeests, as far as the eye can see. During the rainy season from November to May, the wildebeests, whose population has been estimated at around 1,500,000 are found in the eastern section of the Serengeti and also the Maasai Mara in Kenya to the north. When the dry season begins at the end of June, the annual migration commences as the animals move in search of food pasture. The Serengeti is also famous for cheetahs, leopards, and lions, some of which migrate with the wildebeests while others remain in the central plain.

The elephant population in Serengeti was decimated by poaching, estimated to have fallen fivefold during 1970 to 1980s, since then, the numbers have slowly increased. Birdlife is prolific in the national park and includes various species of kingfishers, sunbirds, rollers, ostriches, egrets, herons, storks, ibises, spoonbills, and ducks. Birds of prey include Ruppell’s vulture and the hooded vulture, several varieties of kestrels, eagles, goshawks, and harriers. There is also a hippo pool by the name of Retina where you can have clear views of the hippopotamuses and even crocodiles.

The park is close to the Serengeti, northeast of Tanzania. Lake Eyasi marks part of its southern boundary and the Serengeti National Park lies to the west. The conversation area encompasses Ngorongoro Crater, Embagai Crater, Olduvai Gorge that is famous for its palaeontological relics and Lake Masek. The crater is home to a small number of black rhinoceroses, sustains a huge population of ungulates and has the most concentrated numbers of lions know.

However, there are an estimated 30,000 animals living in the crater. Encounters with animals are frequent and there is a wide variety of game in the crater. These include lions, elephants, rhinos, buffaloes, Thompson’s gazelles, wildebeests, and zebras. You are also likely to see ostriches and Lake Magadi, the soda lake at the floor of the crater which is a home to thousands of flamingos. There are also dive-bombing kites which are recognized for their skills of snatching visitors’ foods at the Lerai forest, which is a good place for a picnic lunch.

During this safari, you will be served daily three meals. You will also get 1,5-liter mineral water per person per day.