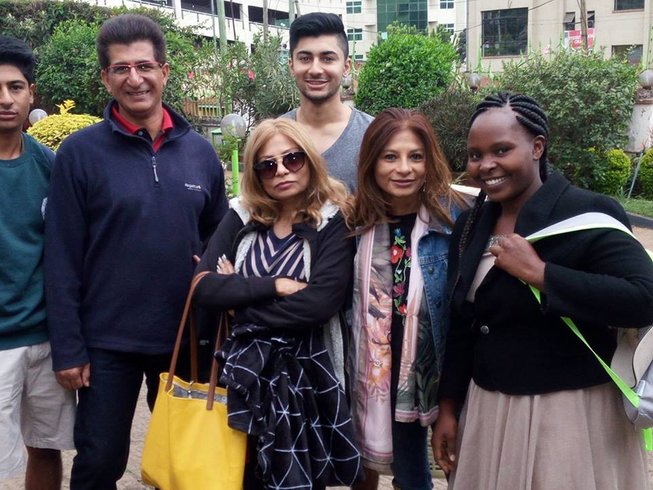 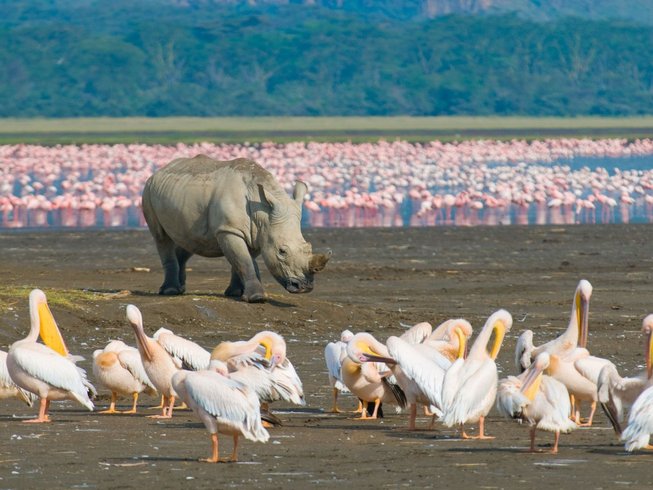 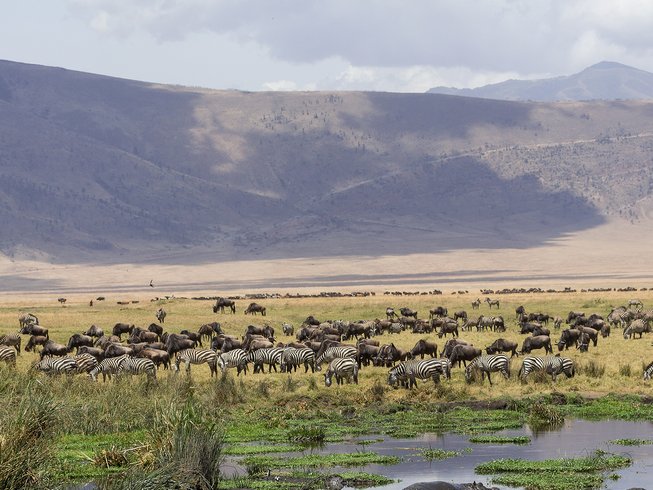 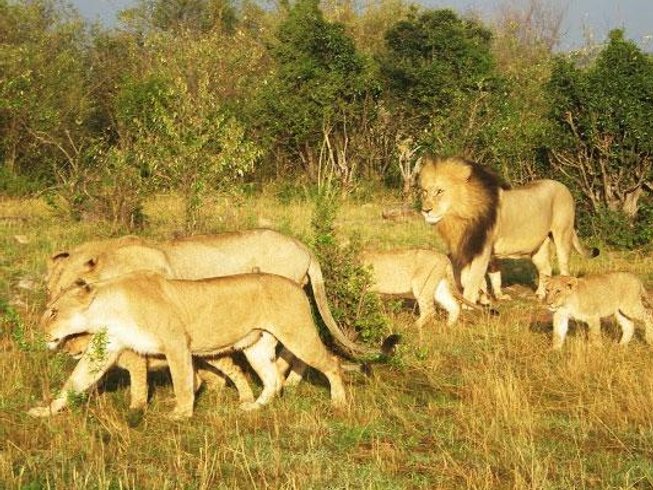 Let your adventurous soul join a safari that makes you see the world-famous sights that Kenya has to offer. Visit the renowned sanctuary of Lake Nakuru, a bird watcher's paradise themed in pink. Marvel at the wonderland that is Lake Naivasha with its glistening waters and the whimsical views of the wilderness. Dare to explore Hell's Gate National Park and know why it is called so. Witness the greatest concentration of wildlife in the legendary game park of Maasai Mara.

You will be staying in various lodges in the following locations:

Scheduled pick-up from your hotel, proceed to the Safariline Defender Tours office to meet with members of a small group for the safari and for a briefing as well. Thereafter, depart for Maasai Mara, making stops at Great Rift valley viewpoint and Narok for lunch and refueling. Arrive in the afternoon, check-in, and relax; later, go for an evening wildlife safari game drive.

Maasai Mara National Reserve has one of Kenya's vast plains filled with a variety of animals it is also best known for wildebeest migration that usually happens in the months of July to October, which is one of the "Worlds Natural Wonder", there is also wildlife viewing all year round. Experience a wonderful Kenya safari with dinner and overnight at a lodge.

Breakfast will later be accompanied by a game drive at the Mara Reserve. The reserve boasts of hosting 400 bird species, 95 mammalian species, amphibians, and reptiles. Wildlife is abundant at Mara; hence the Big Five; lion, the elusive leopard, rhino, elephant, and the African buffalo which are predominant. Break for lunch at the "Hippos pool".

In the afternoon, one can opt for the various optional activities, which are a visit to the Maasai people community or a hot air balloon safari of the reserve which is taken early in the morning for a finer view of the African sky and aerial view of the park. Experience a wonderful Kenya safari with dinner and overnight at a lodge.

Early morning game drive followed by breakfast after which depart for Lake Naivasha. Lake Naivasha is one of the freshwater lakes in Kenya, it has a huge population of fish, hence, attracting a variety of fish-eating birds such as eagles, cormorants, pelicans, and the kingfisher.

The vast lake has Crescent Island; one can opt to take a boat trip at, an extra cost, which boasts of the resident giraffe, zebra, gazelle, waterbuck as well as varied bird species. After lunch, have a game drive in Hells Gate National Park which offers spectacular scenery of towering cliffs and gorges, one can opt for cycling with a bicycle, at an extra cost, in the gorge. Enjoy your safari in Kenya with your dinner and overnight at a lodge.

Early morning game drive then breakfast, after which depart Naivasha for Lake Nakuru region. Lunch en-route, with scenic distant views of Mt. Longonot and Lake Naivasha. On arrival in the afternoon, check in and relax. Experience a budget Kenya safari with your dinner and overnight at a lodge.

Breakfast then proceed for a game drive at Lake Nakuru National Park, which is best known for thousands of flamingoes nesting at the shorelines, hence, its characteristic pink rim, this makes it one of the best birding destination safari in Kenya. Lake Nakuru National Park also has a variety of bird species, fish eagles, marabou stork, pelicans, herons, and the kingfisher.

On your wildlife safari drive get sightings of rhinos, this park has the largest concentration of rhinos in the entire country, later depart for Nairobi with lunch en-route. Arrive in Nairobi and drop off at the airport or your respective hotel. End of the safari tour!

Lake Naivasha means "rough water" as sudden storms occur sometimes in the freshwater lake which is slightly located northwest of Nairobi in Central Kenya. It measures 139 square kilometers and is surrounded by privately owned sanctuaries with beautiful grounds which run down to the lakeshore.

It is also a grazing ground for hippos every night. It supports 400 bird species. The beautiful Lakes Oloiden and Lake Sonachi neighboring it are home to the Naivasha flamingos.

Joy Adamson, Joan Root, and numerous other famous conservationists all have had homes on the shores of Lake Naivasha. The Djinn Palace, which gained notoriety during the Happy Valley Days, can be seen from the lake and now forms part of Oserian which is a rose farm and a stunning game sanctuary.

Lake Nakuru is one of the best places in Central Kenya to see the elusive leopard and the endangered rhino. The lake's abundance of algae attracts the vast quantity of flamingos that famously line the shore. It is also easy to reach from Nairobi.

The park was named for the pair of massive red-tinged cliffs framing a geothermically active interior of steam vents and bubbling springs. It is home to a profusion of plains game and birdlife. Walking is permitted, making it ideal for hiking, biking, and rock climbing.

Boat trips on the lake are widely available and are a great way to spend an afternoon or morning. Sunsets are always stunning with the haunting call of a fish eagle high over the lake, bringing the day to a perfect end.

Maasai Mara is in Southern Kenya and measures a 1,500-square kilometer mass of rolling plains bordering Tanzania with a surrounding dispersal area of almost the same. Game is abundant in every area of the Mara. Its habitat is rolling, open grassland divided by riverine woodland associated with several small streams and rivers as well as the great Mara River.

In the Mara, it is warm during the day, cold in the mornings and evenings, and it rains in April, May, and November. It offers a wide variety of wildlife of over 450 species of animals. You will easily see lions, rhinos, hippos, crocodiles, giraffes, wildebeests, zebras, buffalos, warthogs, hyenas, jackals, wild dogs, leopards, many kinds of antelopes, and elephants.

The Mara is home to the annual wildebeest migration, rightly the Eighth Wonder of the World, and a journey of 1,800 miles for the wildebeests. During the outstanding migration, approximately two million wildebeest, zebra, and topi make their way to the lush grasslands of the Massai Mara, Tanzania’s Serengeti. The sweeping grass hills further champion the endowed uniqueness.

The journey is perilous as large numbers of predators including the leopard, lion, cheetah, wild dog, and hyena all lie in wait to snatch up their unsuspecting prey whilst crocodiles lie in wait each year for that first wildebeest to cross the Grumeti and Mara Rivers. Viewing the sheer magnitude of animals among the wildebeest migration, as well as the drama and action of the extraordinary natural spectacle, is nothing short of miraculous.

The vast open grass plains, so typically Kenyan, the rivers, the escarpment, and the valleys produce one of the most undoubtedly beautiful places on earth. The Maasai Mara National Reserve ecosystem hosts the last great concentration of mixed species, plains, wildlife in Africa, and game viewing. As a result, it is unparalleled to anything else.

Kenya takes pride in its strategic location on the global equator and the fact that it is positioned on the East Coast of Africa. The beauty of the African land is just unique, to say the least. It covers an area of about 586,600 square kilometers. Thus, it is a middle-sized country on the continent.

Its diverse heritage is no doubt rich in most aspects with the glaciated mountains with snow-capped peaks, the Rift Valley with its scarps and volcanoes, ancient granitic hills, flat desert landscapes, and coral reefs and islets. As reiterated in the country’s national anthem, there is plenty within its borders such as savannas rich with big game, timeless cultures unchanged by the modern world, pristine beaches, coral reefs, and equatorial forests.

It has mighty snow-capped mountains, searing deserts, cool highland retreats, and endless opportunities for adventure, discovery, and relaxation more than you would ever expect.

During this safari, your daily breakfast, lunch, and dinner will be provided for you as well as mineral water. Food is available in Halal, vegetarian, and non-vegetarian meals.

For a more exciting experience, you may join a boat ride in Lake Naivasha at an additional cost. You may also try on a balloon safari or visit a Maasai village.