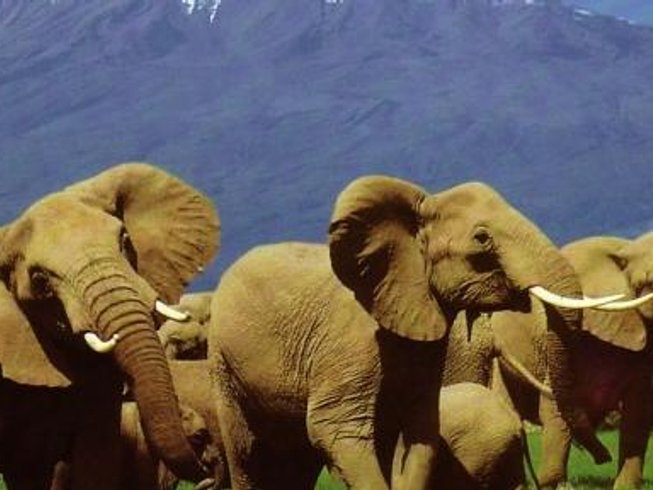 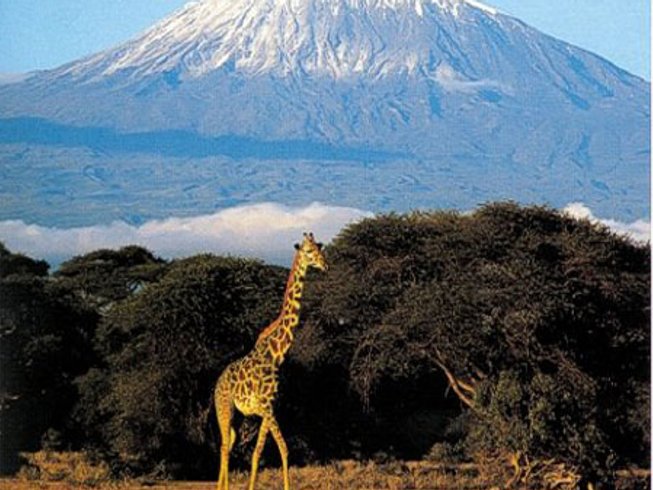 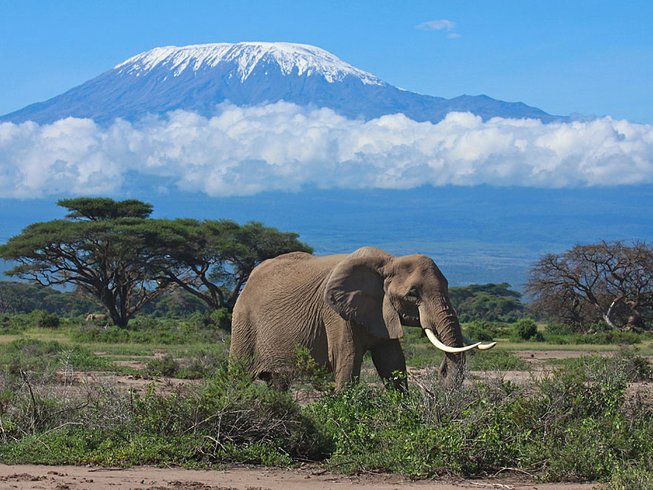 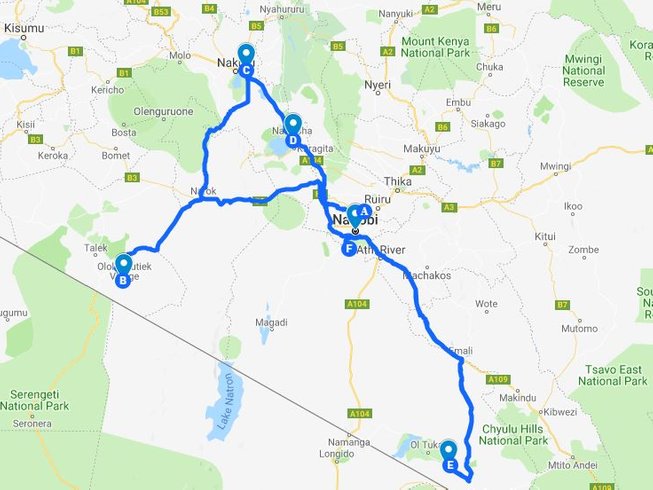 Login to save to your favorites
“Enjoy the best of nature in the wilderness!”
​
Photo
all media

Perfect Safaris invites you to take part in the real experience of a safari adventure around the magical country, Kenya. You will excite yourself in game drives and immerse in the breathtaking landscape. Perfect Safaris considers it their responsibility to provide you with the means to have not only a wonderful holiday in Kenya but also an opportunity to experience a variety of different national parks such as Maasai Mara National Reserve, Lake Nakuru, and Amboseli National Park. This will be a memorable safari that your future self will thank you for!

You will be accommodated in various lodges and hotels along the way as follows:

The Lenchada Tourist Camp is a budget semi luxury accommodation and eco-friendly safari tented camp in the North-West of the Masai Mara. Located on the Oloolaimutia hills on the Western border of this world-famous reserve, Lenchada Tourist Camp offers the perfect starting point for your safari.

The camp accommodates 60 persons in single, double, and triple accommodation. The camp fits nicely into the natural environment of the Oloolaimutia hills, and offers an unique opportunity to explore the natural beauty of the Masai Mara. Even after returning from a day out on safari the feeling of wilderness will be maintained. Hot water shower in the camp is produced environmentally friendly by a photovoltaic plant which ensures that you can relax and enjoy the natural sounds of the environment.

Due to the high elevation, the camp is situated at 1,850 meters above sea level, there is a pleasant climate with warm days and cool nights.

All tents have en-suite bathrooms equipped with safari showers, hand wash basins, flush toilets. This is where you can relax and let pass by your impressions collected during an eventful day on safari.

Located on the slopes of the Oloolamuita Hills, this Masai Mara accommodation offers magnificent views across the eastern reaches of the park. The camp is 1 kilometer away from the Ololaimutia Gate and 7 kilometers away from the Sekenani Gate.

The campsite has a total of 70 rooms with the option of single, double, triple, and family occupancy. The units are tented rooms ideal for travelers looking to be true to the wild experience. The tents are linked by a pathway neatly framed by well-maintained flower bushes, manicured lawns, and flanked by indigenous trees. The rooms, which are constructed to best blend with the milieu of the Masai Mara, are fronted by a private veranda ideal for relaxing and giving one the feeling of truly experiencing the tranquility of the bush. Each suite is fitted with mosquito nets and an en-suite bathroom with showers, flush toilets and a washbasin.

Served on a buffet display alongside tasteful African traditional cooking are menus reflecting a variety of choices to accommodate the international clientele. The chef prepares delicious and healthy meals with fresh organic produce transported daily from the country’s farming districts. At the bar, they treat guests to the African tastes and also offer an array of rich local and international beers as well as wines and spirits.

With a total of 98 rooms, the lodge is intimate and friendly with many personal touches. It offers some of the finest accommodation experiences with rooms and facilities tastefully furnished and modern.

This is a group safari whereby the safari car carries a maximum of 8 people.

At 08:00, you will be picked up from your hotel in Nairobi and commence the drive to Maasai Mara National Reserve via the Great Rift Valley viewpoint where you will have a breathtaking view of the floor of the Rift Valley. Lunch will be a picnic on the way. In the afternoon after you check in, you will depart for a game-viewing drive in the Maasai Mara National Reserve. Then, you will return back to the camp for a sumptuous buffet dinner ending with a good time for resting at Lenchada Tourist Camp.

Maasai Mara National Reserve is the most popular tourist destination in Kenya. Located in the Great Rift Valley in primarily open grassland, wildlife is the most concentrated on the reserve’s western escarpment. It is regarded as the jewel of Kenya’s wildlife viewing areas. The annual wildebeests’ migration alone involves over 1.5 million animals arriving in July and departing in November. Hardly can a visitor miss to spot the Big Five. The phenomenal wildebeests’ migration which is a spectacular event only seen in Maasai Mara is the wonder of the world.

You will spend the full day exploring Maasai Mara National Reserve in search of the Big Five. You will have picnic lunch in the reserve as you will scale Mara’s beauty situated at the banks of Mara River. It is in the Mara that perhaps the most spectacular event of the natural world takes place which is the great migration. This is the annual migration of millions of wildebeest and zebra from the Serengeti (in Tanzania) in search of water and pasture. Following on their heels are the predators of the savanna - lions, cheetahs, jackals, hyenas, and vultures.

You will enjoy the last early morning game drive in Maasai Mara Reserve followed by breakfast. Thereafter, you will commence the drive to Nakuru. Your overnight stay will be at Lanet Matfam.

You will enjoy your early breakfast and depart by 07:00 to straight to the park. It is a small park with magnificent, rare white rhinos which form part of the Big Five animals. There is also a possibility to see the pink flamingos. The game drive will last for three hours. After which, you will depart on a 1 hour-hour drive back to Naivasha to arrive at around Lunchtime. After Lunch, you will proceed to hells gate National park for a biking Safari in the park. % you will also walk down the gorges to see the hotsprings. You have the option of just going with the car if you cannot bike.

Back to the Hotel in the evening for dinner and relax

This is a private safari as no groups go to Amboseli National Park.

In the morning start drive to Amboseli National Park which is famous for its scenery with a backdrop of snow-capped Mount Kilimanjaro which dominates the landscape and open plains. Then, you will arrive with more game drive proceeding to your lodge for check-in, time for lunch, check in at AA Amboseli Lodge or similar, and have lunch and a short rest.

You will enjoy an early morning game drive and later return back to lodge for breakfast. After breakfast, you will enjoy the full day spent in the park with packed lunch in search of its popular residents like the well-known predators and their opponents like zebras, wildebeests, giraffes, and hippos with a view of Mount Kilimanjaro. Later, you will return to your lodge for dinner and overnight stay.

You will have an early morning game drive and then later return to your lodge for breakfast. After breakfast, you will check out with a short game drive en-route off Amboseli National Park and drive to Nairobi. When you arrive, you will be dropped to your hotel or the airport. This marks the end of the tour.

Kenya is country which is rich in wildlife animals in diversified areas of the country. The national parks and game reserves are well-protected by the government. Tourism contributes a wider percentage of our economy and so it’s really cherished and conserved appropriately.

Maasai Mara National Reserve is an area of preserved savannah wilderness in southwestern Kenya along the Tanzanian border. Its animals include lions, cheetahs, elephants, zebras, and hippos. Wildebeests traverse its plains during their annual migration. The landscape has grassy plains and rolling hills and is crossed by the Mara and Talek rivers. The area nearby is dotted with villages (enkangs) of Maasai people.

The Maasai Mara National Reserve is named after the Maasai people (the traditional inhabitants of the area) and their description of the area when looked at from afar - “Mara” which is Maa (Maasai language) for “spotted” is an apt description for the circles of trees, scrub, savanna, and cloud shadows that mark the area. It is famous for its exceptional population of Big Cats, game, and the annual migration of zebras, Thomson’s gazelles, and wildebeests from the Serengeti every year from July to October, a migration so immense that it is called the Great Migration.

Lake Nakuru National Park (188 square kilometers, 73 square miles) was created in 1961 around Lake Nakuru near Nakuru Town. It is best known for its thousands, sometimes millions of flamingos nesting along the shores. The surface of the shallow lake is often hardly recognizable due to the continually shifting mass of pink. The number of flamingos on the lake varies with water and food conditions and the best vantage point is from Baboon Cliff. Also of interest is an area of 188 kilometers (116 miles) around the lake fenced off as a sanctuary to protect Rothschild giraffes, black rhinos, and white rhinos.

The local people are mainly Maasai but people from other parts of the country have settled there attracted by the successful tourist-driven economy and intensive agriculture along the system of swamps that makes this low-rainfall area (average 350 millimeters (14 inches)) one of the best wildlife-viewing experiences in the world with 400 species of birds including water birds, pelicans, kingfishers, crakes, hammerkops, and 47 types of raptor.

The park protects two of the five main swamps and includes a dried-up Pleistocene Lake and semi-arid vegetation. Located in 140 kilometers (87 miles) south of the capital city Nairobi, Amboseli National Park is the second most popular national park in Kenya after Maasai Mara National Reserve and the visit can easily be done in a weekend.

In the evening on day two, you may visit the local Masai Village for a Masai cultural tour at 10 USD. You can learn about the Masai community and interact with the local Masai people. A balloon safari at 400 USD per person can also be organized early morning on this day and then you will proceed with the normal program.

Please book your flight to arrive at Jomo Kenyatta International Airport (NBO). The organizer will pick you up from the airport, the pick-up is included in the price.