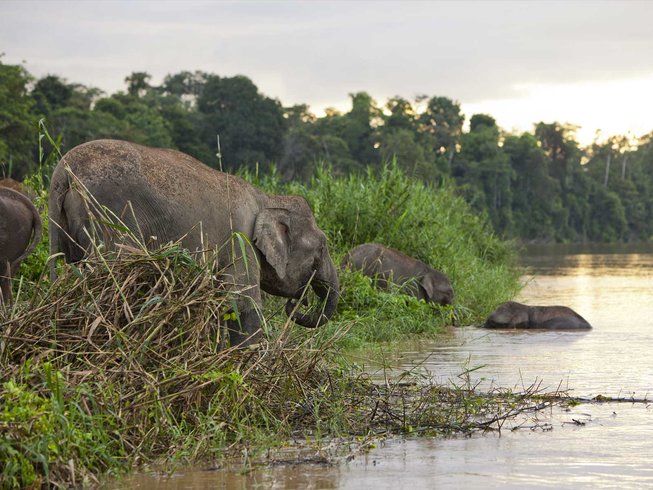 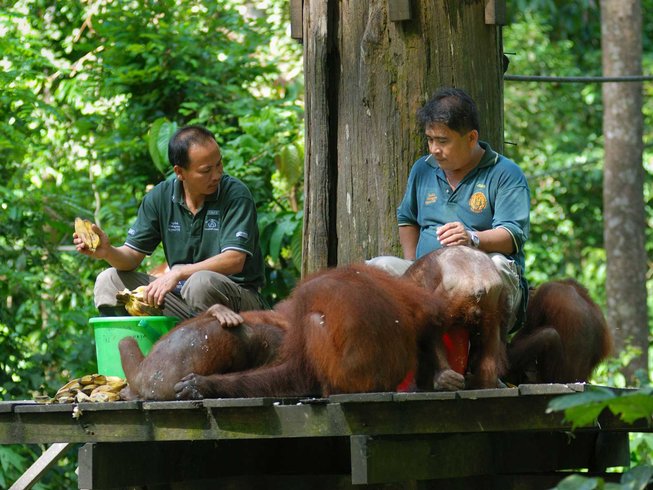 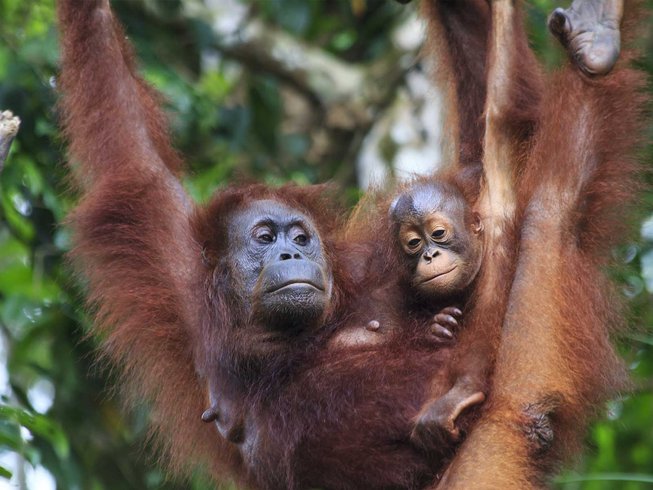 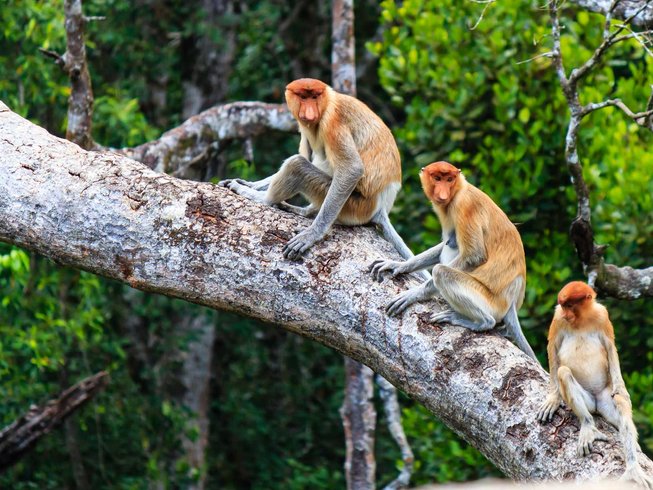 This wildlife tour will take you to discover the best of Borneo wildlife and to experience the lower Kinabatangan in Sandakan, Malaysia. The area is one of the world's richest ecosystem and is a must place to visit when you are in Sandakan. The river safari cruise takes you to the wonders of wildlife in its natural habitat. Among the common sighting are the Borneo Pygmy elephant wandering by the river bank, the orangutan in the wild, abundant colorful birds, and nocturnal animals. Fully licensed with extensive first-hand experience from a team of local insiders, Outback Venture crafts this tour that will help you make most out of your precious time and live out your wildest dreams.

During this Borneo wildlife tour, you will stay one night at a lodge in Sepilok, one night at Selingan Island Chalet in Turtle Island, and the rest of the nights at Bilit River Lodge in Kinabatangan.

Meet at Sandakan Airport (SDK) and transfer to Sepilok Orangutan Rehabilitation Centre. Proceed to the orangutan feeding platform to view the orangutan feeding, following this take a visit to the Borneo Sun Bear Conservation center to get close to the world smallest bear in its natural environment.

Following lunch after check-in the afternoon, take a second visit to the sanctuary for the afternoon feeding time. Soon after that, continue to the Rainforest Discovery Centre. The Exhibition Centre and Plant Discovery Centre will bring you lots of information about the nature in the area. Take a chance to walk on a suspension bridge and ending it with the only canopy walk in Sandakan.

Breakfast and by 8:15 a.m., depart to the jetty for Selingan island also known as turtle island. The journey by boat will take about one hour. Upon arrival, check-in and gear up for snorkeling by the beach area to spot a beautiful marine life. While waiting for dinner, help yourself to watch the slideshow on the Selingan island and its turtle. After dinner, standby at the cafeteria and wait for the signal from the ranger before proceeding in small groups to the egg-laying site to see first hand the mother turtle laying eggs. Stay overnight at Selingan Island Chalet. Please note that photographing of the turtle only with an unaided flash camera. Snorkeling gears are available for hire (please refer to the island management)

After breakfast at around 7:00 a.m., depart back to the mainland then proceed to Sandakan Nature city tour. Visit the Sandakan Memorial Park, Puu Jih Shih Buddhist Temple, located on a steep hilltop where you can have a magnificent view overlooking Sandakan Bay and the town center. Then continue to St. Michael’s church. Drive to the Central Market to see the local produce being sold. Next, visit the Agnes Keith Museum and stop at the nearby English Tea House for lunch. Back on the road again to Gomantong Cave, the house of millions of bats and swiftlets. Continue to the last stop river lodge where you will spend the night. After dinner, go for a nature walk.

Wake up early and at around 6:00 a.m., hop on the boat for an early morning cruise. Return back to the lodge for breakfast. In the late morning, depart for a guided jungle walk to experience the riverine forest. Trek back to the lodge for lunch. Enjoy a relaxing afternoon by the river lodge deck as you never know what you could see lurking nearby the lodge. In the late afternoon, depart for another river cruise.

Breakfast and depart for Sandakan city by 8:30 a.m. to be dropped off at your respective hotel or Sandakan Airport (SDK)

The second-largest city in Sabah and rich with historical past, Sandakan is located in the east coast of Kota Kinabalu City in the island of Borneo. During the British colonial time, Sandakan was the capital of the British North Borneo before it razed to the ground during World War II. Today, Sandakan is recognized as the gateway for eco-tourism destinations in Sabah to destinations such as the Sepilok Orang Utan Sanctuary, the Turtle Islands Park, Kinabatangan River, and the Gomantong Caves.

Besides the wildlife adventure destinations, Sandakan is also known for its very rich historical city, that should include visits to the Sandakan Memorial Park, Agnes Keith House, English Tea House, and one of the oldest church the Saint Michael Church.

Kinabatangan River in the East Coast of Sabah is the second longest river in Malaysia. The 560 kilometers river runs across Sabah is part of the Sukau-Kinabatangan Wildlife Sanctuary that offers great opportunities to see amazing wildlife on an open longboat safari. Nestled along the Kinabatangan River are several small villages such as Sukau, Abai and Bilit are among the prominent points for tourist lodging, ranging from cozy chalets to homestay and eco-jungle camp.

The main attraction of Kinabatangan tour activities usually includes dusk and dawn boat cruises, with light trekking and night walks. These offer the chances to see some orangutans, proboscis monkeys, crocodiles, gibbons, and the Bornean pygmy elephants to make appearances.

One would have not seen Sabah, Borneo, as a complete trip without making it to the Sepilok Orangutan Rehabilitation Center. A chance to visit Sepilok will leave visitors in awe and feeling well educated on the Borneo’s famous wild-man of Borneo. The rehabilitation center was founded in 1964, which is under the management of the Sabah Wildlife Department. It was created to rehabilitate orphan orangutans that were rescued from captivity. Alongside the center is the Bornean Sun Bear Conservation Centre and Rainforest Discovery Center.

The newly opened Bornean Sun Bear Conservation Centre is equally popular, with the same objective that is to help rehabilitate the Bornean sun bears. The sun bears are active and playful mostly during the day. These bears do not hibernate, they would climb trees and extract honey from beehives, conferring them with the alternative name of ‘honey bear’.

Please book your flight to arrive at Sandakan Airport (SDK). Transfer from and to the airport is included. Outback Ventures will pick you up from the airport.