3 Day Orangutan and Wildlife Tour in Tanjung Puting National Park, Kalimantan
This listing has no upcoming availability. Check out these similar experiences 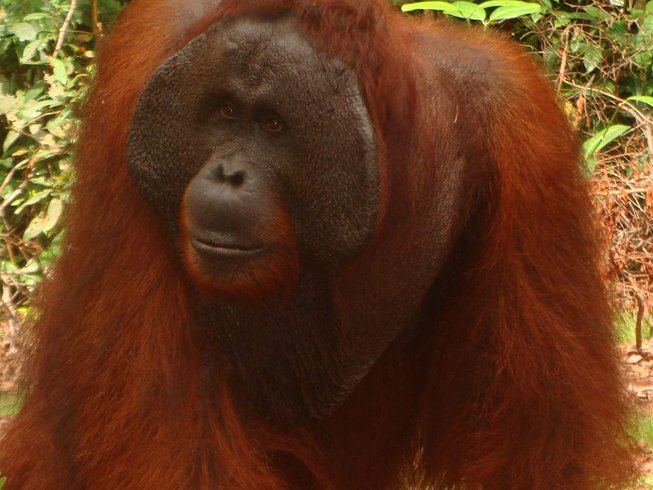 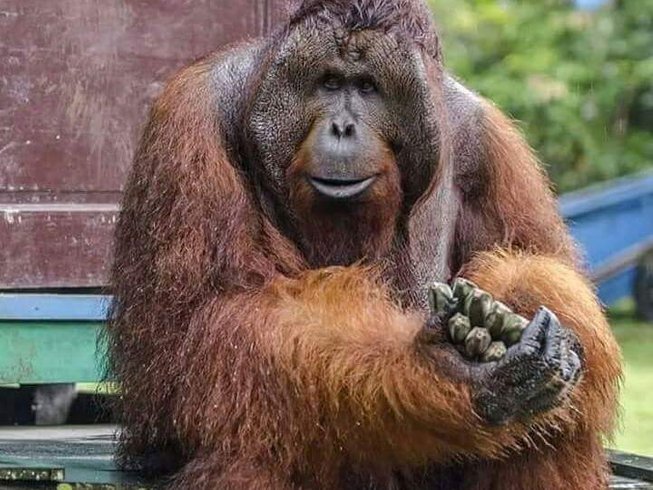 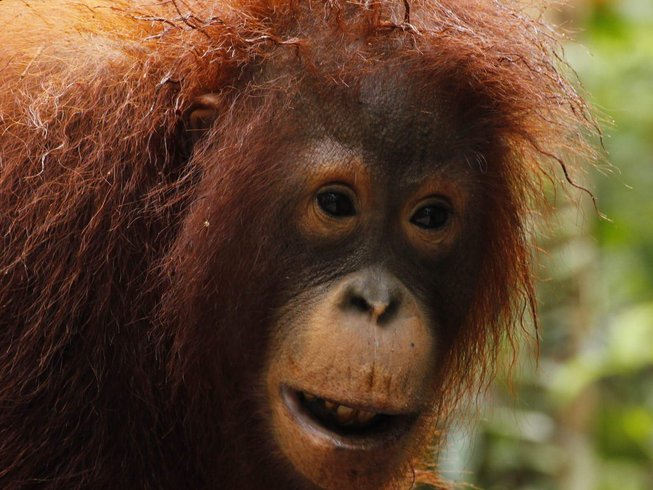 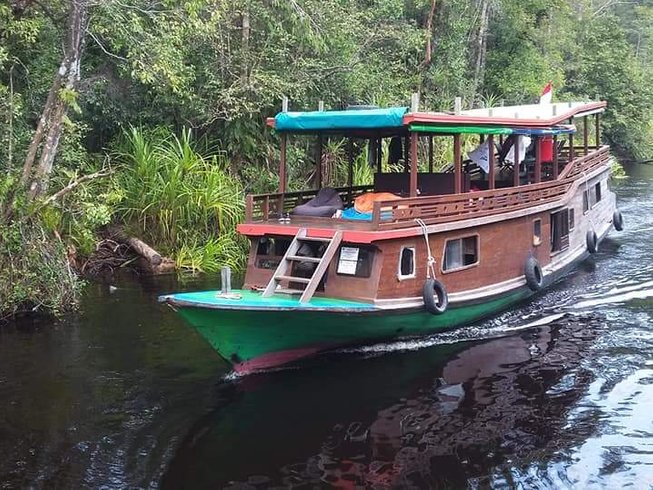 Login to save to your favorites
“See orangutans in their natural environment!”
​
Photo
all media

Welcome to the secret world of orangutans in Tanjung Puting National Park! Let Orang Utan Kalimantan Tour & Travel bring you to the mystic Tanjung Puting National Park, located on the island of Borneo, in the Province of Central Kalimantan, Indonesia. Get to see monkeys and orangutans, and have a wonderful time traversing the natural wonders of Indonesia.

You will be provided two nights of accommodation on-board a river houseboat. On the boat, you will find a table, chairs, mattresses or cushions, pillows, mosquito nets, toilet, kitchen, and generator for electricity.

Upon arrival in Iskandar Airport (PKN), you will be picked up by the local guide and he will take you to Kumai harbor approximately 20 minutes away by car, and then, you will board a Kelotok, a wooden river houseboat to go to Tanjung Puting National Park.

The Kelotok is specially made for tourists and has a roof which forms the upper deck so you can easily view the tropical rainforest. You will explore the quiet Sekonyer River to observe the presence of wild animals, such as the Proboscis monkeys, macaques, and different kinds of birds. You will then stop at Camp 1 Tanjung Harapan Station to see the feeding time at 15:00. The schedule is dependent of what time you arrive at Pangkalan Bun Airport.

After breakfast, you will travel up the river by houseboat for approximately two hours to Camp Leakey. Before arriving at the Camp Leakey, you will stop in Pondok Tangui station to see the feeding time of orangutans at 09:00 a.m, and then you will proceed to Camp Leakey.

After lunch on the houseboat, you will have the opportunity to take a short trekking in Camp Leakey or visit the information center, before seeing feeding time of orangutans at 14:00. On your way back for dinner, you can enjoy the natural surroundings of the river. At night time, if the weather is good, you can see fireflies illuminating the palm (nipah) trees.

Overnight stay will be on the houseboat. Breakfast, lunch, and dinner are included.

After breakfast, the local guide will take you to Kumai Town into the boat harbor (approximately 25 to 30 minutes), and then the local guide will prepare the car to Iskandar Airport (PKN) where you will be dropped off. This marks the end of the tour. Breakfast is included on this day.

On the first day, if you want to see feeding time at 15:00 in Camp One in Tanjung Puting National Park, you must buy flight ticket in time from Jakarta Airport, Surabaya Airport, or Semarang Airport in the morning before 12:00 p.m. If you come to Pangkalan Bun Airport in the afternoon around 02:00 p.m, you will be late to see the feeding time at 15:00 in Camp One.

The ORANGUTAN (Pongo pygmaeus) is the only species of great apes that live in Asia. They are native to the tropical rainforests and the low-lying swamps in the Southeast area, in Indonesia and Malaysia (on the islands of Borneo and Sumatra). The word orangutan means “man of the forest” in the Malay language.

Known for their intelligence, they use objects as tools. For example, they use leaves as umbrellas to keep the rain from getting them wet. Orangutans share approximately 97% of the same DNA as humans. Chimps and people share almost 99%. Genetic similarity indicates shared evolution.

There is greater genetic similarity between apes and people than apes and monkeys. They live in trees and are the largest living arboreal mammal. They move by swinging from one branch to another. Orangutans can also walk using their legs (but rarely do). They do not swim. They are omnivores (they eat both plants and animals) but are mostly herbivorous (plants comprise most of their diet). They eat fruits (their favorite food), leaves, seeds, bark, honey, plant bulbs, tender plant shoots, and flowers.

They also eat insects like termites. They do not even have to leave their tree branches to drink since they drink water that has been collected in the holes between tree branches. Each evening, orangutans construct a “nest” in the tree branches for the night in which they will curl up and sleep.

These nests are made out of leaves and branches. Nests are shared by a mother and her nursing offspring. Orangutans often nap in the afternoon after a morning spent obtaining food. Orangutans have a large, bulky body, a thick neck, very long, strong arms, short, bowed legs, and no tail. They are about 2/3 the size of the gorilla.

They are mostly covered with long reddish-brown hair. The orangutan has a large head with a prominent mouth area. Adult males have large cheek pads (which get larger as the ape ages). They have senses very similar to ours, including hearing, sight, smell, taste, and touch. Their hands have four long fingers plus an opposable thumb.

Their feet have four long toes plus an opposable big toe. Orangutans can grasp things with both their hands and their feet. The largest males have an arm span of about 7.5 feet (2.3 meters). Orangutans are generally passive but the males, which are significantly larger than females, can be fiercely territorial.

Male orangutans are capable of very long, loud calls (called “long calls”) that carry through forests for up to 0.6 mile (1 kilometers). The “long call” is made up of a series of sounds followed by a bellow. These calls help the male claim his territory, call to females, and keep out intruding male orangutans. Males have a large throat sac that lets them make these loud calls.

Orangutans are shy, solitary animals that are active during the day (they are diurnal). They live alone in large territories with males and females coming together only to mate for only a few days. This is probably due to their eating habits. They need a large area in order to get enough food and too many orangutans in one area might lead to starvation.

The only long-lasting orangutan social group is the mother and offspring. Females are pregnant for 8.5 to 9 months and give birth to a single baby, only about every 5 to 6 years. The female will raise its young for 7 to 8 years before independence. Orangutans are mature and capable of reproducing when they are 7 to 10 years old. Their life span in the wild is 30 to 45 years.

The animal that poses the biggest threat to the orangutan is man. As its habitats are being usurped by man, the orangutan’s population is decreasing and it is in grave danger of extinction. Orangutans are seriously under threat due to the wide scale deforestation occurring in Borneo.

Estimates put the rate of native forest destruction by loggers and palm oil plantations at the equivalent of 300 football fields every hour. In the 2008 Guinness Book of Records, Indonesia was included for being the country with the highest rate of deforestation. Many baby orangutans are orphaned as the forests are destroyed and the luckyones end up in rehabilitation centers.

Carers working with these babies stay with them as surrogate mothers 24 hours per day to feed and support them. The babies are all highly traumatized and grieving.

Camp Leakey has been the center of orangutan research for 45 years under the guidance of Professor Biruté M.F.Galdikas, making this the longest single species investigation by a single person. In 1971, the 25 years-old Canadian Birute Galdikas began living in the remote jungles of Indonesian Borneo.

She was determined to penetrate the world of the elusive “red ape” in the name of science and conservation. That was when she set up her research camp, the Camp Leakey, named after her famous paleontologist professor, Louis Leakey. She is a pioneering primatologist, holding a Ph.D. in anthropology from U.C.L.A. and is president of the Orangutan Foundation International in Los Angeles.

You can read the memoir of this remarkable woman in her book “Reflections of Eden” published by Back Bay Books.

Tanjung Puting National Park (TNTP) is located at the Peninsula of South West central Borneo and is a preserved area for plants and wild animals. An area of about 415,040 hectares, it was firstly preserved by the Dutch Government on June 13, 1936, followed by the Forest Minister of Republic Indonesia on May 12, 1982.

This park is the largest tropical rain forest in South East Asia. The area is predominantly flat, undulating to an altitude of 0 – 100 meters above sea level. The temperature range in this region is between 22 to 32 degrees Celsius, with an average humidity of approximately 87%.

Tanjung Puting National Park (TNTP) helps protect the remaining orangutan habitat. There are a number of key re-release sites where rescued orangutans have been returned to the wild. Tourists can visit three sites in Tanjung Puting, where ex-captive wild-living orangutans are fed.

This is a wonderful opportunity to watch them up close eating, playing, and interacting. The released orangutans come every day to the feeding sites in the forest except when there is abundant fruit on the forest trees. The Proboscis monkey is a reddish-brown arboreal old-world monkey endemic to Borneo.

The distinctive trait of this monkey is the long nose, which is especially large in males (up to 10 centimeters), which acts as a resonating chamber to amplify the warning calls. Proboscis are dimorphic with males (up to 24 kilograms) much larger than females (12 kilograms).

The male is also noted for its permanent penile erection. The proboscis has a large belly designed to digest otherwise unpalatable leaves by fermentation. It is a good swimmer and leaper and can often be seen crossing rivers. It sleeps by choice in the trees hanging over the river making sightings easy. Besides the primates, you can also find other species like: