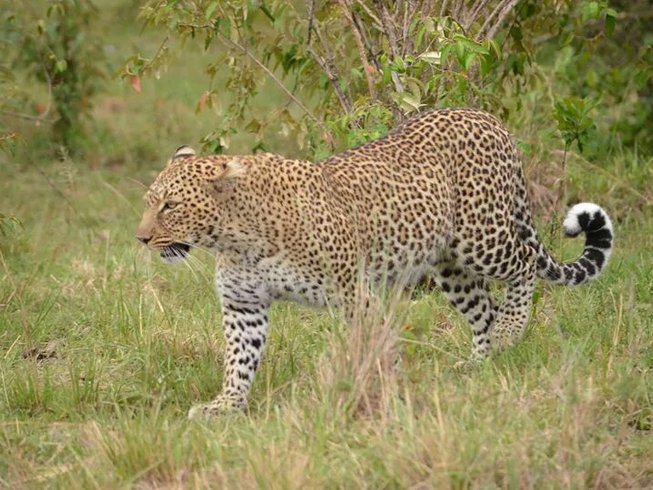 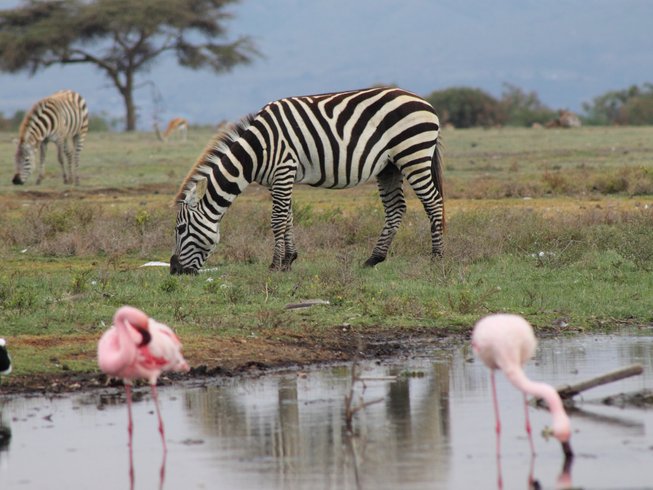 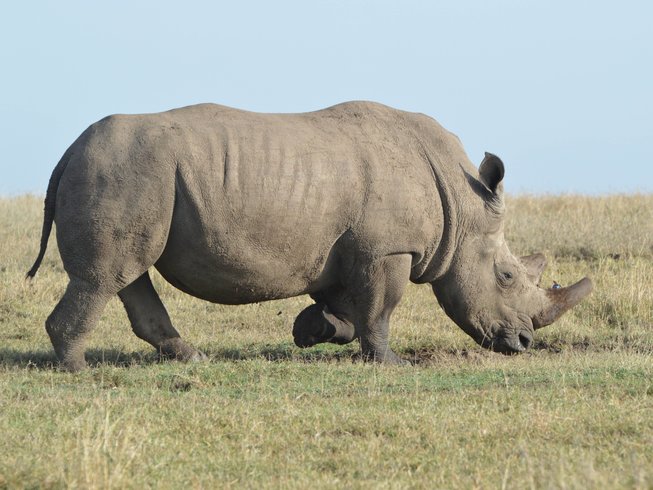 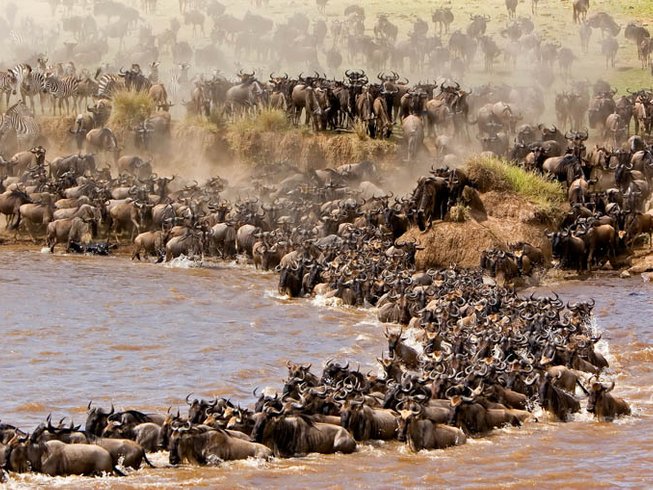 Book your five days Kenya highlights safari with Nomadic Holidays and Safaris and discover the unique wildlife found in Kenya. The safari takes you at the Equator where you marvel at animals only found in the northern part of Kenya, and then experiencing the usual but also unique wildlife. It also takes you to the most famous Kenya safari destination, the Masai Mara National Reserve.

During the tour, you will stay at Sweetwaters Tented Camp, Lake Naivasha Sopa, and Azure Mara Haven or other accommodations with similar qualities.

After breakfast, depart for a drive north passing through the heart of central Kenya to Ol Pejeta Conservancy with a brief stop at the Equator where you may do a simple water test to ascertain the magnetic effect on the northern and southern sphere.

Continue to Samburu set in the rugged semi-arid northern region with spectacular scenic landscape. Arrive in time for lunch at your preferred choice of accommodation and some leisure time. later in the afternoon head out on an exciting game-viewing drive thereafter return for dinner and overnight.

Tonight, you will stay at Sweetwaters Tented Camp or similar. Meal plan: full board.

After a delicious breakfast, you will embark on a leisurely drive via Nyahururu with a brief stopover at the Thompson Falls. Arrive in time for lunch, spend some leisure time and later in the afternoon you will enjoy a boat ride in the Lake Naivasha. Stay in Lake Naivasha Sopa or similar accommodation. Meal plan: full board.

Early morning game drive in this spectacular park to catch up with animals that may have eluded your view. Thereafter, return to your lodge for breakfast. Depart for the Masai Mara National Reserve offering wonderful scenery and plenty of game. It is perhaps the only region left in Kenya where visitors may see animals in the same super-abundance as existed a century ago.

Arrive in time for lunch at your preferred choice of accommodation and some leisure time, later in the afternoon head out for an exciting game viewing drive in this vast and expansive reserve teeming with game. Return for dinner and overnight. You will spend the night in Azure Mara Haven or similar accommodation. Meal plan: full board.

Full day in Masai Mara with morning and afternoon game viewing drives in search of the "big five." Masai Mara is the northernmost extension of the Serengeti Plains and one of the richest wildlife game reserves. It is home to the awesome black-manned lion, cheetah, the elusive leopard, stately giraffes, vast bulk of elephants, rhino, thundering herds of zebra, migrating wildebeest and numerous other plains game. Return to your lodge/camp for dinner and overnight. Tonight, you will stay at Azure Mara Haven or similar accommodation. Full board meals are included.

After a sumptuous breakfast, you will check out and then proceed with the drive back to Nairobi.

Geographically, it is located in Samburu County. It is relatively small in size compared to other Kenyan parks, such as Tsavo or Masai Mara. It ranges in altitude from 800 to 1230 meters above sea level.

The Ewaso Ng’iro River flows through doum palm groves and thick riverine forests, with one side being the Buffalo Springs National Reserve and the other side of the river the Samburu National Reserve. It provides water, without which the game in this arid region could not survive.

Samburu National Reserve can be entered via the Archer’s Post, Ngare Mare and Chokaa gates. Once inside the reserve, there are two mountains visible: Koitogor and Ololokwe. Samburu National Reserve is very peaceful and attracts animals because of the Ewaso Ng’iro River (meaning “brown water” and pronounced U-aa-so-Nyee-ro) that runs through it and the mixture of acacia forest, thorn trees, and grassland vegetation.

The Ewaso Ng’iro flows from the Kenyan highlands and empties into the famous Lorian Swamp. The natural serenity that is evident here is due to its distance from industries and the inaccessibility of the reserve for many years.

All three big cats known as the lions, cheetahs and leopards can also be found here, as well as the elephants, buffalos, and hippos. Other mammals frequently seen in the park include olive baboons, warthogs, Grant’s gazelles, dik diks, impalas, and waterbucks.

They have resisted the tide and test of time and a rugged environment by clinging to their culture, very colorful with beads and hair dyed with ochre plus the whole body to be beautiful. Interesting ceremonies to a like initiation in adulthood are some of the cultural rites that tourist may witness on a meet-the-locals tour.

The climate in Samburu is hot and dry during the day, and cool during nights and evenings. Average maximum temperatures are around 30°C with minimum temperatures of approximately 20°C. Most of the rain falls between March and May, with short rains falling from November to December, recording a total maximum rainfall of 350mm. July through October and January through March are mainly hot and dry.

The Masai Mara National Reserve is a national reserve located in Narok County. It is named in honor of the Masai people (the ancestral inhabitants of the area) and their description of the area when looked from afar: “Mara,” which is Maa (Maasai language) for “spotted,” an apt description for the circles of trees, scrub, savanna, and cloud shadows that mark the area.

The reserve covers 1510 square kilometers of outstanding wilderness in southwest Kenya. It is the northern-most section of the Mara-Serengeti ecosystem which covers some 25,000 square kilometers (9,700 square miles) in Tanzania and Kenya. It is bounded by the Serengeti Park to the south, the Siria escarpment to the west, and Maasai pastoral ranches to the north, east and west.

Rainfall in the ecosystem increases along a southeast–northwest gradient, varies in space and time, and is markedly bimodal. The Sand River, Talek River, and Mara River are the major rivers draining the reserve. Shrubs and trees fringe most drainage lines and cover hillslopes and hilltops. Wildlife tends to be most concentrated on the reserve’s western escarpment.

The Masai Mara is regarded as the jewel of Kenya’s wildlife viewing areas. The annual wildebeest’s migration alone involves over 1.5 million animals arriving in July and departing in November. Wildebeests traverse the Mara plains during their annual migration.

Recognized as one of the most spectacular wildlife events on the planet, the migration is a continuous route that is followed by an over 1.5 million wildebeests and thousands of zebras, gazelles, and elands. In their never-ending pursuit for the finest grazing and watering grounds, the gnu relocates on an almost constant basis.

The perseverance of these wildebeests is demonstrated in their ability to mate while on the move, and many cows are pregnant during part of the migration. Additionally, even the youngest wildebeest calves are expected to keep up with the herd. Standing and walking within minutes is critical to its survival.

There have been some 95 species of mammals, amphibians, and reptiles and over 400 birds species recorded on the reserve.

The reserve has an altitude of 1,600 meters above sea level. Rainy season from November through May, with peak rainfall in December-January and April-May. Dry season from June-November.

On day 4, you may join a balloon safari over the Mara plains followed by a champagne breakfast or visit a traditional Masai Manyatta (off the beaten track) and experience the culture of this world-famous community. The Masai still live as they did for centuries. Interact with these nomadic people and experience their way of life as you learn about their customs and traditions.