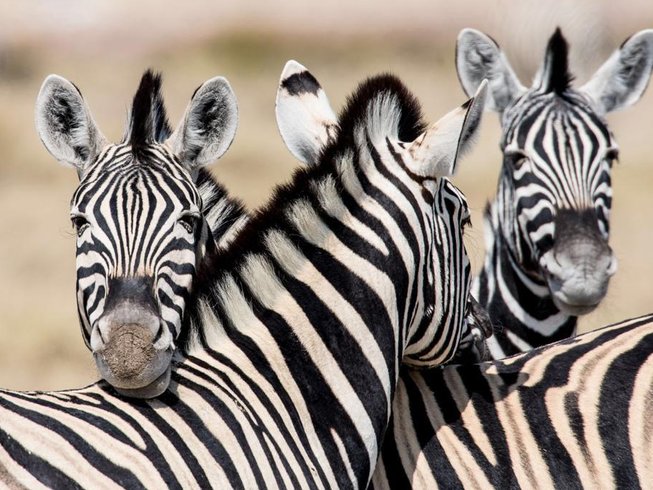 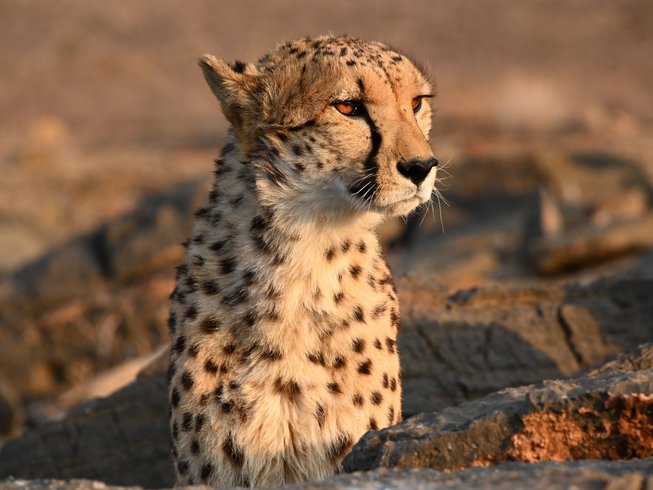 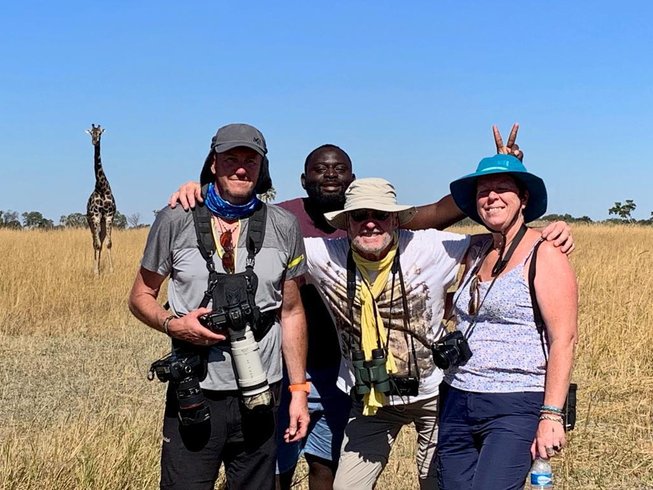 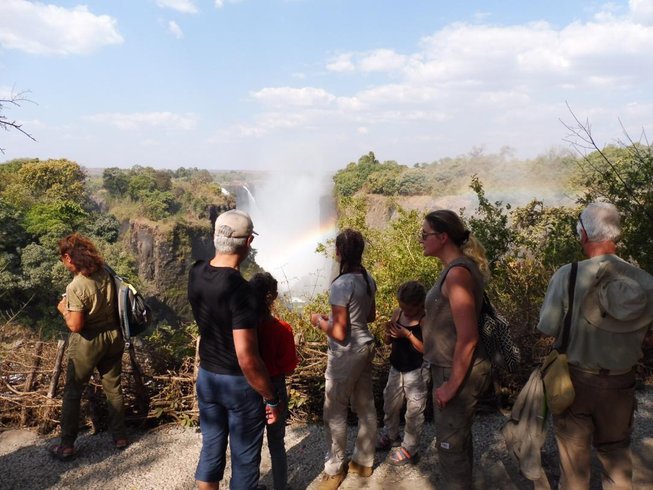 This self-drive safari will take you to different attractions in Namibia such as Otjiwarongo, Etosha National Park, Himba Village, Twyfelfontein, Walvis Bay, Namib Desert, Sossusvlei, Aus, Fish River Canyon, and Kalahari. Keep your camera in your hands so you do not let anything slip between your fingers. And do not forget to live the moments in real life too.

During this safari, you will be staying in accommodations within the national parks / venues of your activities.

At Windhoek Airport or at the place of your accommodation, discover the caring smile of the guide who will welcome you. He will brief and explain to you everything you need to know about this tour. The guide will also answer all the questions that you might have. Depart towards Otjiwarongo, passing by the craft market of Okahandja.

After breakfast, depart north to Okaukueyo. It is in the animal park of Etosha that your stilt continues. You will get time to observe the animals! Photo enthusiasts will have to bring along their equipment and patience to capture the unusual encounters with wildlife.

You will be able to observe the groups of springboks, zebras, etc., but also the rarer species such as the black-faced impala (endemic to Namibia) or the dik-diks, the smallest African antelope. The interactions between the animals around the waterholes are often magical in Etosha, where you may come across the path of a leopard or a group of lionesses hunting!

After a tasty breakfast at the lodge, it is in the animal park of Etosha where you will continue for the day. You will discover abundant wildlife that you can observe on the "pan" or around the many water points of the reserve. You will take on the animal safari around the park.

Established in 1907, Etosha National Park is home to 114 mammal species and more than 340 bird species. This park is one of the largest game reserves in the world. So, take advantage and do not forget your binoculars too long, you will never tire of scanning the horizon for having flushed a cat under an acacia or a troop of elephants strolling nonchalantly through the huge Salt Lake that gave his name at the park.

After breakfast, today you will visit the village of Himbas. The Himba are a tribe of nomadic pastoralists who live in the Kaokoland region of Namibia. The Himba are actually descendants of a group of Herero shepherds who fled to the northwest after being displaced by the Nama.

The Himba are indigenous peoples with an estimated population of about 50,000 in northern Namibia, in the Kunene region, and across the Kunene River in Angola. Motema Tours and Safaris Namibia allow themselves to ask you to buy some provision for them; they will be delighted to receive you on their land.

Today, you will visit the Twyfelfontein site, which has one of the largest concentrations of rock engravings in Africa. Most of these works are well-preserved and represent rhinos, elephants, ostriches, giraffes, as well as footprints of men and animals. After the visit, you will go towards Uis, a mining village, from where you can see the Brandberg, the highest peak in Namibia. Continuation to Swakopmund and installation.

Swakopmund is a small oceanfront town, bordered on the south by Swakop wadi and coastal dunes. The coolness of the current of Benguela will allow you to make pleasant walks by the sea or in the dunes. Some lodges also offer spa treatments (especially massages) particularly popular after several days on the Namibian slopes.

Early departure to Walvis Bay, the main port of Namibia. A boat trip on the lagoon leads you to search for dolphins and sea lions (not private). During this early morning trip on the Atlantic Ocean, you will be looking for sea lions, dolphins, pelicans, cormorants, and possibly the rare fish "Mola-Mola". This sea adventure allows you to discover the aquatic life of the coast in the best possible conditions, on a comfortable and spacious boat, usually a catamaran, with a maximum capacity of 25 people.

Did you know that the Atlantic in Namibia was home to so many sea lions? You will observe them this morning from a catamaran. In the afternoon, free time in the confusing "Seaside" city of Swakopmund, founded by the German commander Curt Von Francois in 1892. The objective was to create a competing port of the one of Walvis Bay (held by the English) to put into service a naval line between Hamburg and Namibia from 1899. This was to facilitate the supply from Germany and support the colonization of the region. Your lunch will be served during the boat trip

After breakfast, today will be all about forms and colors. The Sossusvlei dunes rise more than 375 meters above the Tsauchab River that flows from east to west in the desert, just a few kilometers from the Atlantic Ocean. They are among the highest dunes in the world. These dunes are located above an ancient petrified desert that forms a basement of sandstone.

You will take full advantage of the ocher color palettes and the wavy shapes of the Sossusvlei and Deadvlei dunes. You are encouraged to climb to the top of these giant heaps of sand, before enjoying a well-deserved lunch in the shade of acacias, at the foot of Sossusvlei. Later in the day, you will be surprised by the hidden water source at the bottom of the Sesriem Gorge.

A beautiful stage between the Fish River Canyon and Sossusvlei, Aus is the region of wild horses and gateway to the old "Spergebiet" (diamond area prohibited from public access). Departure for Aus via the D707 road with a breathtaking panoramic view. Visit wild horses if the weather permits.

Today, drive to the iconic Fish River Canyon. It is the largest river in Namibia, which has its source in the mountains of Naukluft and joins the Orange River on the South African border after a journey of 650 kilometers. The river usually flows between January and April to become a trickle of water between April and June and a succession of small basins the rest of the year.

Enjoy the view of the summit on the Fish River Canyon, a geological wonder, one of the largest canyons in the world after Colorado. These rocks of 300 million years offer you a majestic spectacle.

Located south-central of Namibia, on the edge of the Kalahari Desert, the city of Mariental lies along the Trans-Namib railway line and serves as the commercial and admiring capital of the Hardap region.

After breakfast, drive to the Kalahari. The Kalahari is the last bastion of the San people. The modern world has traveled all the other territories it once roamed. Namibia is typically made up of red sand covered with fine, mainly golden grasses and dotted with acacia and wildlife.

Today is the last day of your wonder-filled tour in Namibia, departure to Windhoek, where you will arrive in the late morning or early afternoon. You will have some time to visit the city or do some shopping, before driving back to the international airport.

Please note that you must be at the airport two hours before take-off time, and it takes approximately one hour between the city center and the airport. Welcome back and thank you. Your appreciation and comments after the trip will be highly appreciated.