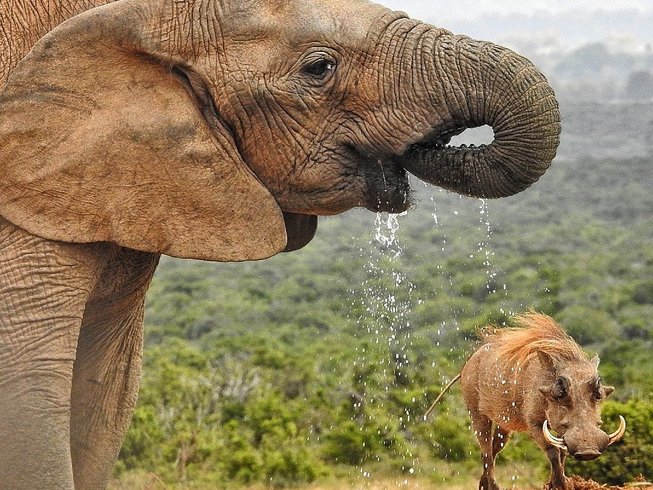 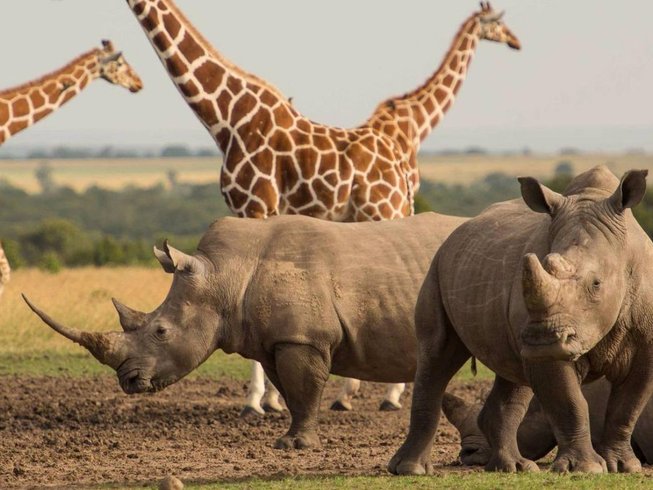 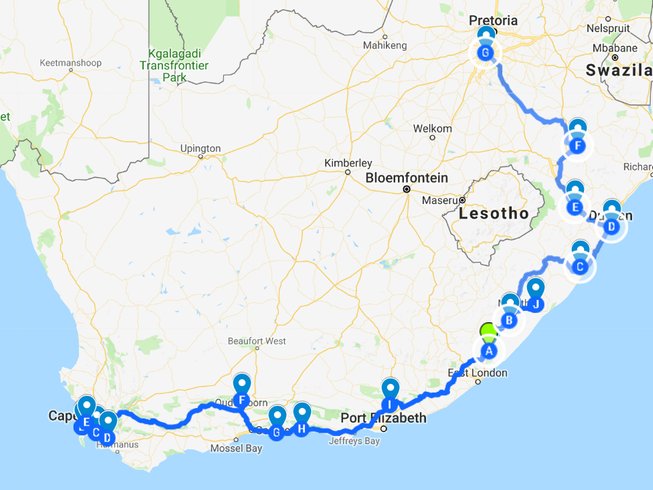 Cape Town, the “Mother City”, or the world’s most fabulous city, is the oldest city in South Africa and has a cultural heritage spanning more than 300 years. The Wild Coast is a stunning section of Eastern Cape coastline stretching from East London in the south to the border of KwaZulu-Natal in the north. It is the home of the Xhosa people and incorporates estuaries, sandy beaches, natural heritage sites, craggy cliffs, waterfalls, and rolling hills, providing spectacular scenery and real authentic traditional experiences. The Drakensberg and Midlands Meander is another section of this tour. Up to 30% off for groups! Please inquire.

Excellent and comfortable accommodation between three and four stars are selected. During this safari, you will stay in the accommodations below as follows:

Cape Town, Winelands, Garden Route & Addo National Park. Cape Town, the “Mother City”, or the world’s most fabulous city, is the oldest city in South Africa and has a cultural heritage spanning more than 300 years.

Meet us at your centrally located hotel to start this tour for Cape Town's most famous icon: Table Mountain by the Aerial Cableway at 7 am to take in the natural beauty and stunning views. This is followed by a visit to the first botanical garden in the world to be established (in 1913) to protect local flora, Kirstenbosch National Botanical Garden in the UNESCO-listed Cape Floral Kingdom follows. Lunch is at an African cuisine restaurant. Visiting Groot Constantia, we taste their export quality wines. We journey along the False Bay coastline to Kalk Bay harbour and stroll along the quaint cobbled streets. From here we pass Fish Hoek and Boulders Beach near Simon’s Town, home to one of the few land-based penguin colonies in the world. Choose one of the popular restaurants in the area for dinner. You overnight at Simon's Town Quayside Hotel, or similar.

First visit is Cape Point, part of the Table Mountain National Park and home to an abundance of flora and fauna. You also visit the viewpoint with the Flying Dutchman Funicular. Visit Hout Bay harbour and Camps Bay African Craft Market on our way along the scenic Chapman’s Peak drive. Driving in the direction of Stellenbosch, we go to the Spier Wine Farm for chocolate and wine tasting on the banks of the Spier dam. You then visit the Vergenoegd wine farm for some wine tasting and to see a duck parade. Choose one of the popular restaurants in the area for dinner. Overnight at Simon's Town Quayside Hotel (or similar).

Starting our journey to the Garden Route, we visit some of the numerous farm stalls at Grabouw, and then moves on to the town of Oudtshoorn with Route 62. This route delivers an unforgettable South African travelling experience, making of life-long memories. (Lunch en-route) After visiting the Cango Caves for a Heritage Tour, we head down the scenic Outeniqua Pass and onto the green forests and beaches of the Garden Route. Overnight is at the Acorn Guest House George (or similar).

You can choose one of the following activities to do: a boat ride for a “Dolphin Encounters” excursion of 1,5 to 2 hours at Ocean Blue Adventures, jump from the ‘highest recognized bungee from a bridge’ in the world, the Bloukrans Bridge Bungee Jump, or do a Tsitsikama Canopy Tour at Stormsriver Adventures. You can also choose to walk through the "Garden of Eden" and the "Big Tree" as another option. Our last stop for the day is at Jeffreys Bay, home to the best right hand surf break in the world! Overnight at Surf's up Accommodation @Supertubes (or similar).

From here we go to the Addo Elephant National Park while being on the lookout for Humpback Whales at Nelson Mandela Bay, (Algoa Bay) between the months of August and December. Addo Elephant National Park conserves a wide range of biodiversity, landscapes, fauna and flora. It is home to all of Africa's Big 7: lion, leopard, buffalo, elephant, rhino, the Southern right whale and the great white shark. A night game drive follows dinner at their restaurant: "Cattle Baron is famous for its steaks, having won several awards for the Best Steakhouse in South Africa. The signature dish is chateaubriand, a fillet flambéed with brandy and served with mushroom sauce and béarnaise sauce." Overnight is here in a cottage.

Leaving the Addo National Park, you can choose to do optional sand boarding on the dunes of the Sunday’s River.

The Wild Coast is a stunning section of Eastern Cape coastline stretching from East London in the south to the border of KwaZulu-Natal in the north. It is the home of the Xhosa people and incorporates estuaries, sandy beaches, natural heritage sites, craggy cliffs, waterfalls, and rolling hills, providing spectacular scenery and real authentic traditional experiences.

Heading North to the spectacular Wild Coast along the roads of the Transkei, and see how the Xhosa people still live in their traditional rondawel huts, with farm animals grazing by the side of the road against the backdrop of the Drakensberg in the distance! You then veer off the N2 to “The Hole in the Wall”, one of South Africa's most famous tourist attractions, where you have a yoga session. The iconic Hole in the Wall rock formation is a geological masterpiece. It is an offshore stack of stratified sandstone through which the power of the waves has worn an impressive hole. The locals call this "izi Khaleni" which means place of thunder. During certain seasons and water conditions, the waves clap in such a way that the concussion can be heard throughout the valley. If you want to have a real authentic traditional experience, sleep in a rural rondawel (hut) of a traditional Xhosa village if available at the time. You also have the choice to stay at the Hole-in-the-Wall Hotel.

After visiting some of the most beautiful and unspoiled beaches in the world, we drive to the Oribi Gorge Nature Reserve, which lies snugly at the head of a spectacular river gorge lined with dense coastal bush and forests.) The breath-taking scenery along the Umzimkulwana river gorge makes this a photographer’s and nature lover’s paradise. Wildlife in the Oribi Gorge consists of many antelope, although the graceful oribi (after which the gorge is named) is rarely seen. You can do an optional activity at the Wild 5 Adventures, like the wild Gorge Swing to experience the Ultimate Rush! Situated at the top of Lehr’s Waterfall in Oribi Gorge, this is the highest swing of its kind in the world, abseil down a 110m Cliff face, alongside Lehr’s waterfall, walk the suspension bridge (84 Meters) – (A spectacular opportunity to be suspended between heaven and terra firma, as you hover 100m above the Gorge floor enjoying views never before seen of Lehr’s Waterfall and Baboon’s Castle, or just relax on the overhanging rock. See more here: http://www.wild5adventures.co.za/ We stay at the 3-star Oribi Gorge Hotel. (or similar)

The Hibiscus coast with its inviting stretch of Indian Ocean which sometimes presents the year-round delights of frolicking dolphins and majestic, cruising whales, provide the spectacular scenery for the drive to Durban. Your tour group now has the opportunity to choose one of the following activities for the rest of the day: optional scuba diving at Aliwal Shoal from Umkomaas, a rocky reef which is the remains of an ancient sand dune approximately 5 km off the coast of KwaZulu-Natal, South Africa. The reef is inhabited by many kinds of hard and soft corals and a variety of tropical and subtropical fish species. You can also visit uShaka Marine World in Durban. We overnight at Gooderson Tropicana Hotel in Durban, or similar.

Kwazulu-Natal Drakensberg & Midlands Meander. A barrier of upward-pointing spears for the Zulu name “Quathlamba”, describes the craggy pinnacles that form the most spectacular part of the Great Escarpment of Southern Africa’s major watershed. Add in daily yoga practices and you’ll soon find yourself reflecting on our adventure with complete clarity.

Leaving Durban, we head to Howick to visit the Mandela Monument. From here we take the road North on the Midlands Meander and visit Tsonga shoes and bags, the Wine Cellar and Chocolate Heaven. The Dragon Rock Reptile Center can be visited, and you can do the Drakensberg Canopy Tour. Savor lunch at one of the delightful restaurants on the way. You get the option to do a helicopter flight over the main Drakensberg escarpment, or attend a Drakensberg Boys Choir concert if we are here on a Wednesday. Spend the night at the Monks Cowl Resort (or similar).

We head to Johannesburg where you will visit the Apartheid Museum and Gold Reef City, an amusement park located on an old gold mine which closed in 1971. The park is themed around the gold rush that started in 1886 on the Witwatersrand, the buildings on the park are designed to mimic the same period and you can learn how Johannesburg came to be, how gold was discovered on the reef and descend 75 meters underground. You will be dropped off at your hotel or the OR Tambo airport from 18pm.

Jakes Conradie is a South African born who extensively traveled the country. He is competent to advise clients about all the essential aspects of traveling to South Africa. Having passed the SA Specialist Course from South African Tourism, he is always on the lookout to assist, improve the environment, and motivate communities to protect nature and all species in order to create a sustainable eco-system for future generations. His love for nature and history brought him to the most beautiful and spectacular places of South Africa where he wants to take his tourists as well.

During this safari, you will be provided with daily breakfast and dinner. Accolade restaurants with healthy and wholesome food menus are used when available. Lodges, hotels, resorts etc. are chosen with healthy and fantastic food menus.

Here are some optional activities for your own cost you can choose to do: