Who knew that this day would finally come? The day when I’d get to meet elephants and closely interact with them in Chiang Mai, Thailand.

Out of everything my friends and I had planned for our Indochina trip, visiting an elephant sanctuary in Asia and getting my elephant facts straight were what I was looking forward to the most. I’d even overcome a fever the day before our visit because seeing the gentle giants was one of the top items on my bucket list. And when I finally set my eyes on them, it was every little bit of an animal lover’s idea of heaven.

The Chiang Mai Elephant Sanctuary was in a quiet location, as one would expect. Surrounded by refreshing greenery and a rugged dirt road, the elephants roamed free within the vicinity. Though they mostly ate and interacted with each other when I first caught a glimpse of them.

The awesome tour guides with us, Justin “Bieber” (as he likes to be called) and Bas, led us into a small straw house and gave us a brief orientation before meeting the elephants. We were then given a uniform that the elephants would be able to see. This is because they are color blind during the day. They are only able to see colors like red and green. 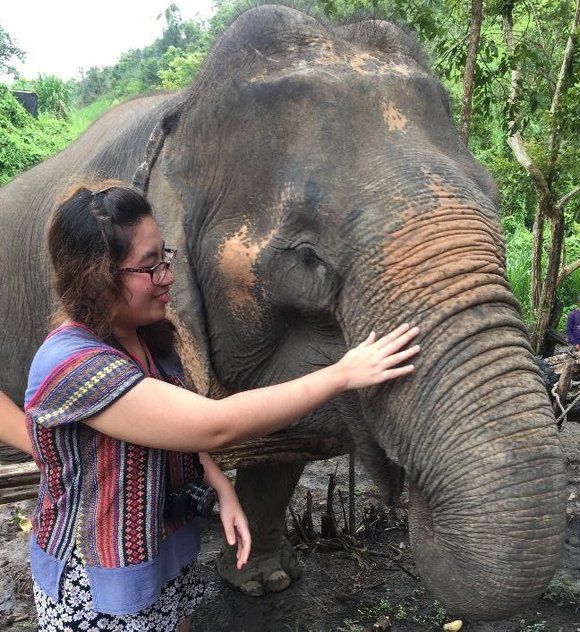 The first thing we did was feed the elephants. There were three of them and at least ten people in the group to share the experience. We were given a big crate of bananas and it was up to us whether we wanted to get a handful or a couple of them. I took about three and immediately listened to our tour guides for the instructions.

The command you had to recite before feeding the elephants was “ bon” and it had to be said in a clear and loud tone. When you do this, the elephants would be properly informed that you were giving them food and would gladly receive the bananas you’re offering them.

Shortly after the instructions were given, a whole bunch of “bon” could be heard and everyone was taking their turns offering bananas to these gentle giants. A couple of my friends were actually a bit scared at first, but I was one of the more enthusiastic ones. Elephants are gigantic, but they were gentle. Who could resist these cuties? I know I couldn’t. Among the many elephants in the sanctuary, my friends and I were particularly attracted to one elephant, named Mula. After feeding her, I was able to pet her trunk and even hug her. She’s the most gentle and even humorous creature I’ve ever met. This is probably why I got a bit emotional when I heard about her story.

Mula is 45 years old and used to be in a riding camp near the sanctuary. Against her will, she had to accept every back ride that came her way, which left scars on her forehead whenever she didn’t want to comply. Thankfully, the sanctuary bought her off of the riding camp and she now lives quite the ideal life with a few other elephant friends. The next step after feeding the elephants was bathing them. Everyone had to be in their swimsuits, which I, unfortunately, didn’t have, so was placed on picture duty. They rubbed mud on the elephants and rinsed them with a hose full of water. Needless to say that it was a fun time. Not only for the group but for the gentle giants as well. And it didn’t stop there.

We had to head down to the river for a bigger rinse. And since it’s the rainy season in Chiang Mai, the path towards our destination was slippery. But all for the love of animals! I had to see it through no matter what happened. Even if I might’ve slipped into the pits of the underworld.

The river bath was a refreshing one. I got to soak my feet for a bit before Justin splashed a big load of water on me and I had to retreat into safety. The elephants were lively and full of character. One of them decided to just lie down and roll around the area. Unfortunately, I wasn’t able to capture the moment but it was certainly one of the moments I’ll definitely remember as nothing but pure joy.

Trek to the Waterfalls

After that, we sadly had to part ways with the elephants and were led to the waterfalls nearby. We spent some time appreciating the beautiful natural surroundings before we had to go on a deadly trek back up to return to the main house. While it may have appealed to the adventurous amongst our group, it’s safe to conclude that treks absolutely do not suit me.

When we finally arrived at the main house, we were given free water and lunch. We could even see the elephants enjoying their own meal from our seats. And this is the exact moment when several things occurred to me.

Travel, and then Travel Some More Despite feeling my fever from before creeping up back in my body, I realized what an experience this was. It’s not every day that one gets to fly all the way to Chiang Mai and meet rescued elephants. To be able to see them was a wonder itself. To get to know them and actually interact with them felt like a dream. A dream I hadn’t exactly realized until the end of it all.

My advice to anyone who’s yearning to have the same experience? Do it. As cheesy as it sounds, life is indeed too short to be spent within your comfort zone. See the world for the mesmerizing beauty that it is. Meet people who will strike an inspiring chord in your heart and even animals that can possibly change the way you look at things. Most of all, fall in love. Fall in love with the idea that you have a lot more to learn. Fall in love with the fact that the earth is so outrageously big and we’re just tiny specks of dust who have yet to explore it. Fall in love with who you are and how great your life truly is.

Who knows? A simple encounter with an elephant may just heal your soul like it did mine.

Aching to meet the gentle giants for yourself? Well then, go on a rewarding and unique elephant safari!

Nina is a contributing writer at BookAllSafaris.com. Recently bitten by the wanderlust bug, her dream is to explore the world for what it truly is while spreading her love for the environment and all animals.