The Best Destinations to Catch a Stunning African Sunset 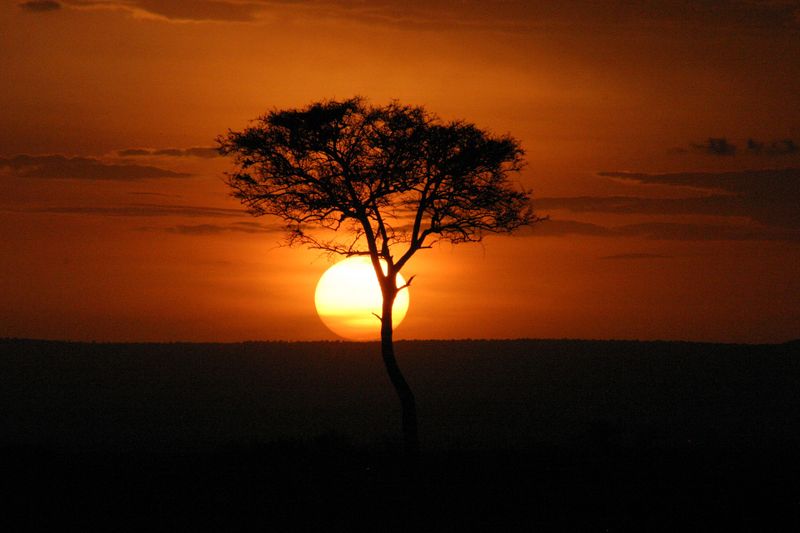 The setting sun, so easy to explain scientifically and almost impossible to describe in words… We all agree Africa is pretty amazing – the incredible wildlife, dramatic landscape, and unspoiled wilderness are bound to strike a chord in each of us. But wait till you see the sunsets!

“Africa – You can see a sunset and believe you have witnessed the Hand of God” – Jodi Picoult. Thanks to Africa’s diverse geography – sand dunes, tropical forests, endless grasslands, arid plains, and lush beaches, each day goes out with a bang. Sipping a sundowner at the end of a fun-filled, adventure-packed African safari is an absolute must, as the horizon catches fire and the land gets painted in red and orange hues.

Get ready to feast your eyes on Africa’s most stunning sunsets. Be warned, they might just convince you to pack your bags and hop on a safari tour! 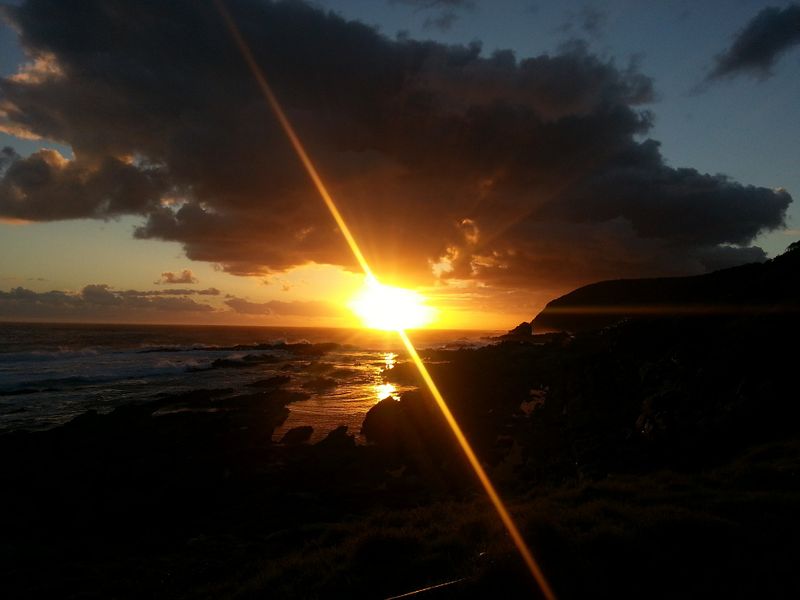 The Garden Route is an iconic stretch of coastline in South Africa, secluded, wild, quiet, and far away from the crowds. Its name comes from the diverse vegetation it displays, alongside a great number of lagoons and lakes. Plus, it offers some of the best beach sunsets in the world. Drive along this pristine coastline and don’t forget to make a few stops along the way, especially at dusk.

Spend the night in one of the tranquil fishermen villages on the coast. For those with itchy feet, Tsitsikamma National Park is a wonderful walking safari and hiking destination. And there’s nothing quite like watching mighty elephants passing in front of the setting sun in Addo Elephant Park just off the Garden Route. 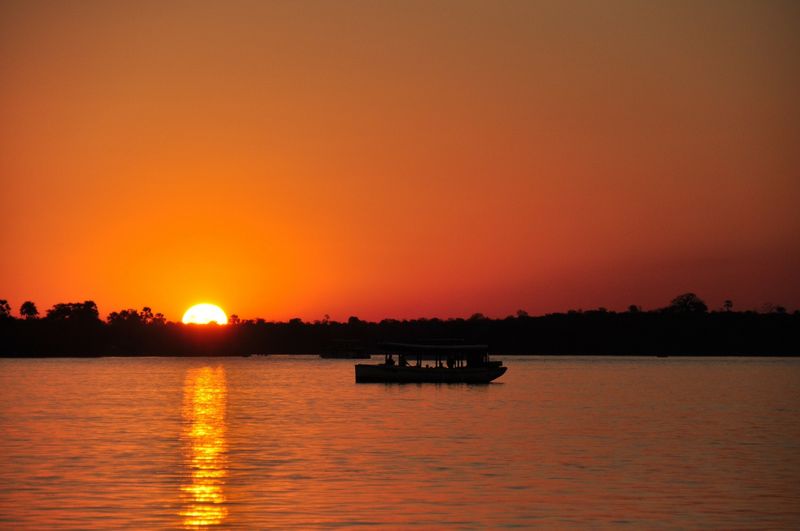 Glide down the Zambezi River at dusk while sipping sundowners and listening to the gentle murmur of the savannah. For many miles in a row, its banks are isolated and far from human settlements. Here, Africa’s wildlife is unhindered and will come to greet you from a distance.

Africa’s fourth-largest river flows through Zambia, Angola, Namibia, Botswana, and Zimbabwe until it enters the Indian Ocean through its delta in Mozambique. Long-distance travel on the Zambezi River is not possible due to the boiling rapids. However, there are parts of the river that are perfect for sunset cruises. One of them is the Victoria Falls, its gushing waters sending clouds of steam into the horizon, capturing and immortalizing the sun’s last rays. 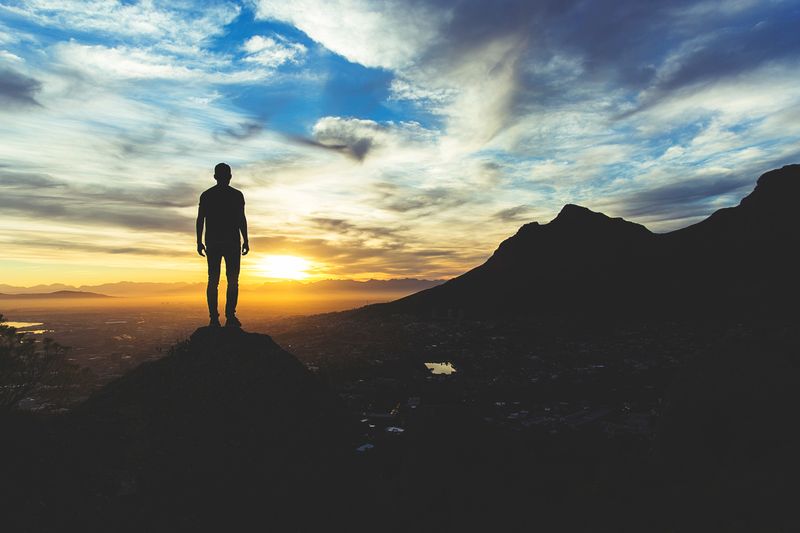 Thanks to its mild weather, South Africa’s sunsets are truly intensified. Table Mountain, the flat-topped mountain rising proudly above the spirited port city of Cape Town, is the very symbol of the area. Hike one of the many trails to the top or take the cable car. Either way, you’re in for a treat! Grab a bottle of wine and have a late picnic just as the sun dives into the Atlantic.

You don’t necessarily need to be on top of Table Mountain to be swept off your feet the moment the sun enters the ocean. You can watch the show from one of Cape Town’s harbors. One of the African Great Lakes, Lake Malawi stretches across Tanzania, Mozambique, and one-fifth of the country of Malawi. Watch the sun turn into a bright red fireball ready to plunge into the lake from a canoe safari. Oh, and try not to rock the boat! Blink, and you’ll miss the whole thing.

Surrounded by mountains, these wild shores are covered in golden sand. Lake Malawi is a popular birdwatching destination – eagles, cormorants, and kingfishers will dive for food right in front of you. It is also a great diving and snorkeling spot, and swimming in the lake at sunset with that special someone is about as romantic as it can get. 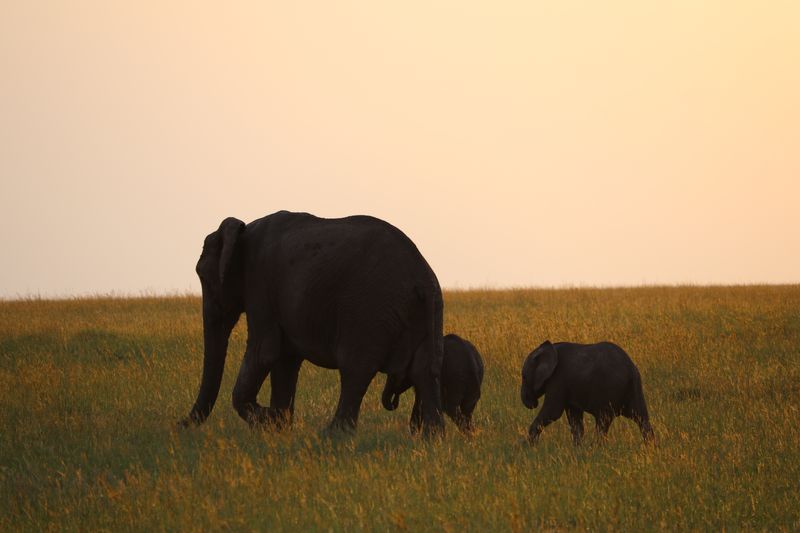 With horizons that seem to stretch out forever, the Masai Mara is proud to present you some of the most beautiful sunsets on Earth. Rusty orange shades cover the plains and wildlife as the sun hides behind silhouettes of acacia trees and lone giraffes. The land’s diverse weather contributes to the show, making each twilight moment unique.

Lay back and enjoy the display from a hot air balloon with a glass of bubbly, flying above the savannah’s predators. Or have a sundowner on a hill overlooking the Mara’s far-stretching plains. What’s more, from mid-afternoon until sunset Africa’s spectacular wildlife will come out to relax in the cooler atmosphere.

For more on the Mara, check out our guide to visiting the Masai Mara National Reserve. 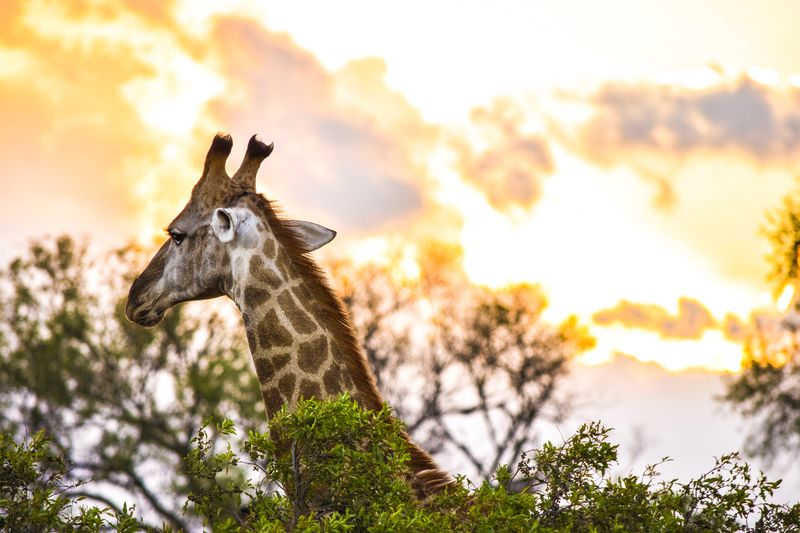 Not a few travelers have said that South Africa accommodates the world’s best sunsets. To the east of the country, Mpumalanga province literally means “the place where the sun rises.” Sunsets are equally spectacular.

The province is home to the southern half of Kruger National Park. The country’s largest game park organizes sunset drives for visitors to watch the wildlife pass them by during the golden hour.

Near Kruger Park, the iconic Blyde River Canyon Nature Reserve, with its red rocks standing 2,625 ft (800 m) above the river bed, sure is a sight for sore eyes. Watch the sun embrace the geographically diverse land from one of the many viewpoints on the edge of the canyon. 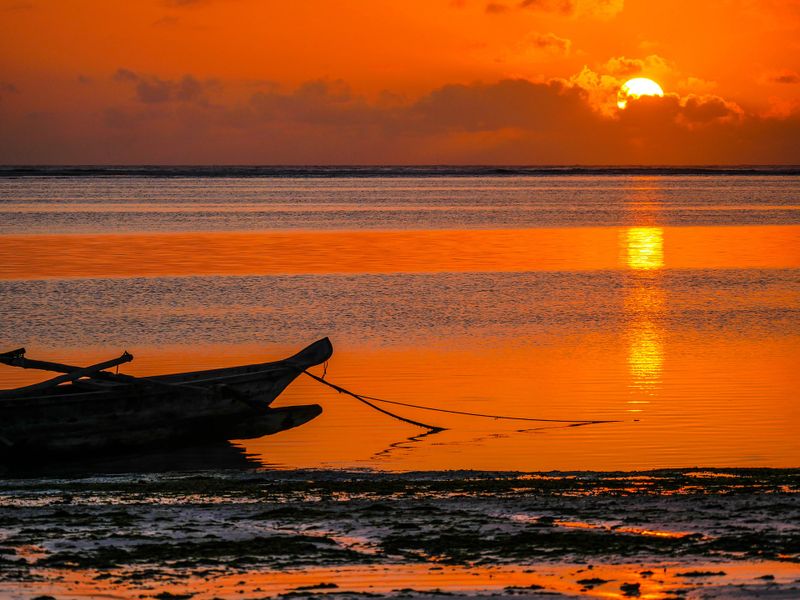 It’s no surprise Zanzibar made its way on our list! With its palm-fringed beaches, white sands, and turquoise waters, the archipelago off the coast of Tanzania is associated with cocktail sunsets and long romantic walks by the Indian Ocean.

In addition, Zanzibar has some of the best beaches in the world. It’s not a personal opinion, but a unanimous vote. It’s also one of the best sunset destinations on the planet. The best seats for the show are on board a dhow (traditional Arabic sailing boats), with a glass of wine in one hand and the other touching the calm surface of the ocean as the sun casts its golden and amber hues. 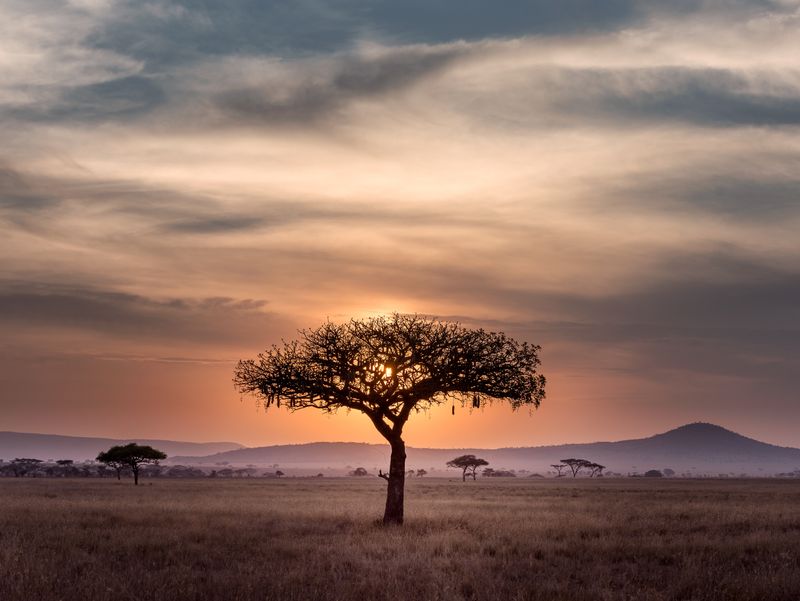 Tanzania is home to more than 10,000 lions. Considering Africa’s population counts 32,000 individuals, that’s a lot! A third of the country’s lions live in the Serengeti National Park, which is also a world-renowned hotspot for spotting the Big Five.

The vast plains of the Serengeti inspired Disney’s animation The Lion King. Actually, Simba means lion in Swahili. Remember those incredible sunsets in the animation, sparking our imagination as kids, continuing to fuel our wanderlust as adults? They’re even better in real life, and you can see them with your own two eyes.

The bright orange horizon, casting silhouettes of giraffes and elephants, should be reason enough to get you to come here! Visitors often say you have not witnessed a sunset until you’ve seen one in Serengeti.

Planning to go on a safari in the Serengeti? Read our detailed guide to visiting Serengeti National Park. 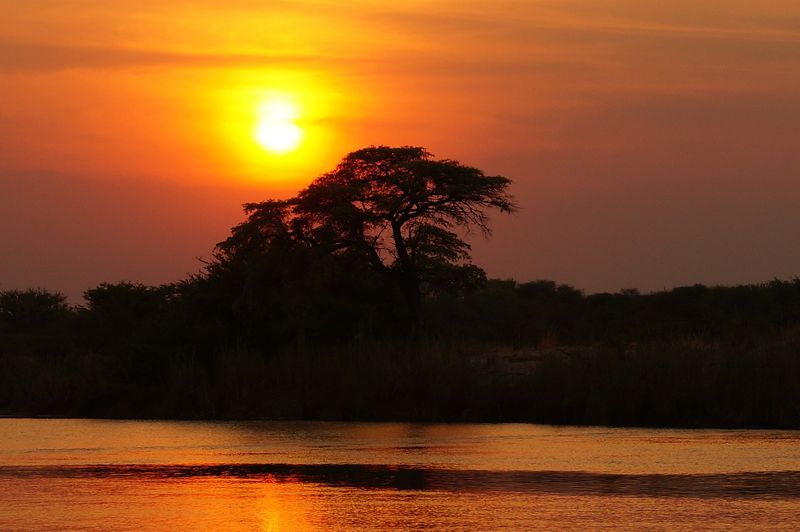 There’s no better way to catch the spectacular setting sun over the delta than on a mokoro safari. These traditional wooden dug-out canoes will take you down the narrow and shallow canals, passing by lily pads, hippos, and crocodiles, as well as many other animals that come to the river to drink.

Botswana’s Okavango Delta and the Chobe River are great birdwatching destinations, and there’s a good chance you might take some photographs of African vultures sitting carelessly on top of tree silhouettes at dusk. 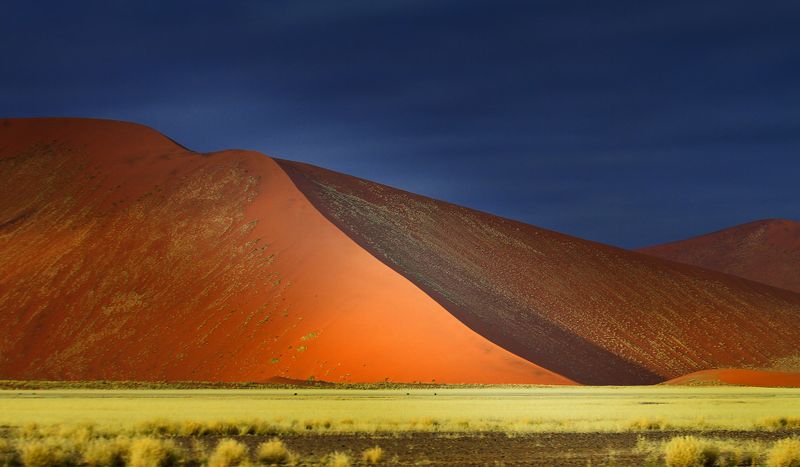 The Namib-Naukluft National Park includes a considerable part of the Namib Desert and the isolated Naukluft mountain range on Namibia’s southwestern coast. Within the park, the dramatic sand dunes surrounding the Sossusvlei salt and clay pan are even more astounding at first light and against the last sunrays of the day. Dune 45, rising 560 ft (170 m) tall, is the most popular spot to catch the sunset in the Namib Desert. 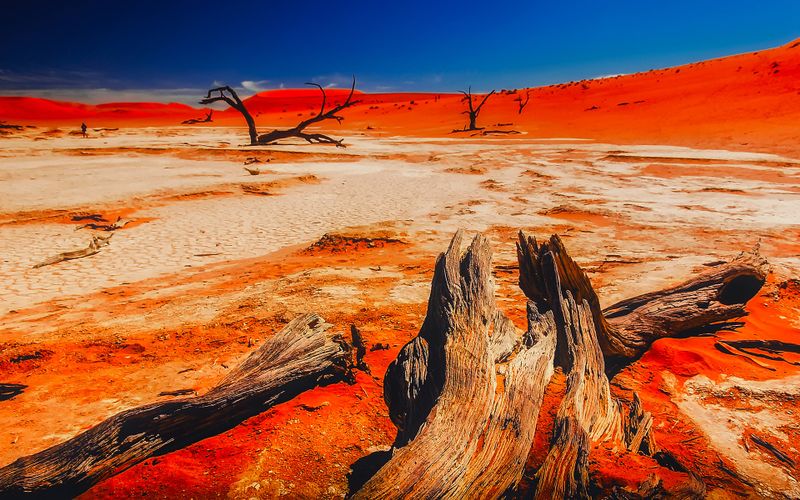 The neighboring Deadvlei white clay pan, literally meaning “dead marsh”, is surrounded by some of the world’s highest sand dunes – the highest is 1,066 ft (325 m) tall and is nicknamed Big Daddy.

On the background of these lemon and apricot-colored dunes stand hundreds of dead, sun-scorched acacia trees, creating a real-life surrealist painting. Landscape photographers simply can’t resist the temptation, and will not hesitate to take the strenuous journey through the desert to capture the amazing show at dawn and dusk.

As cliché as it may sound, there are certain moments in life that leave you breathless. Among them are sunsets. As soon as the sun goes down, the continent opens its curtains for its next great spectacle – the star-filled African sky.

Ready to feast your eyes on Africa’s most stunning sunsets? Go on a savannah safari and let these realms work their magic on you too during the golden hour!