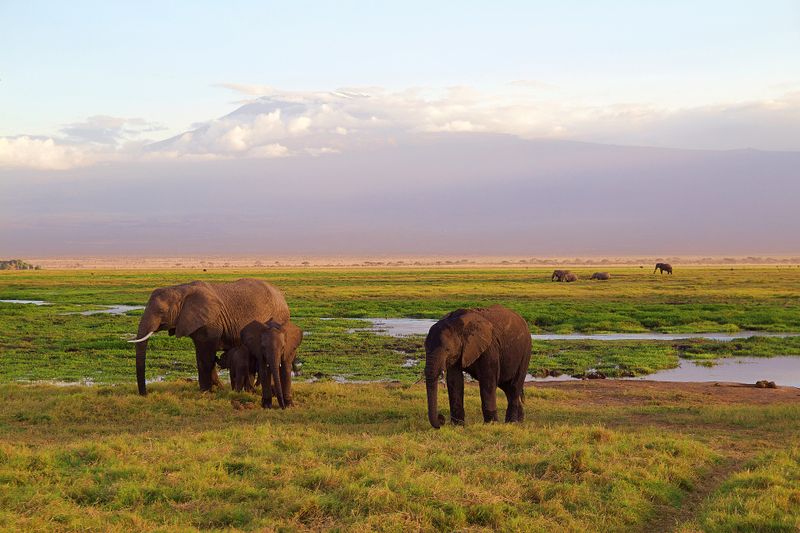 The mighty elephants once roamed the entire globe. Nowadays, they can only be found in Africa and some parts of Asia.

The African elephants are larger than their Asian cousins, in fact, they are the world’s largest land animals and are divided into two species.

The larger African bush elephant, also known as African savanna elephant, prefers grassy plains and woodlands and can be found in 37 countries in sub-Saharan Africa. While the smaller African forest elephant inhabits the equatorial forests in central and western Africa.

If you are looking to catch a glimpse of these gentle giants in their natural habitat, elephant safaris are your best bet.

Below, you’ll find information on the top countries as well as a list of African national parks where you are likely to spot large herds of elephants in the wild: 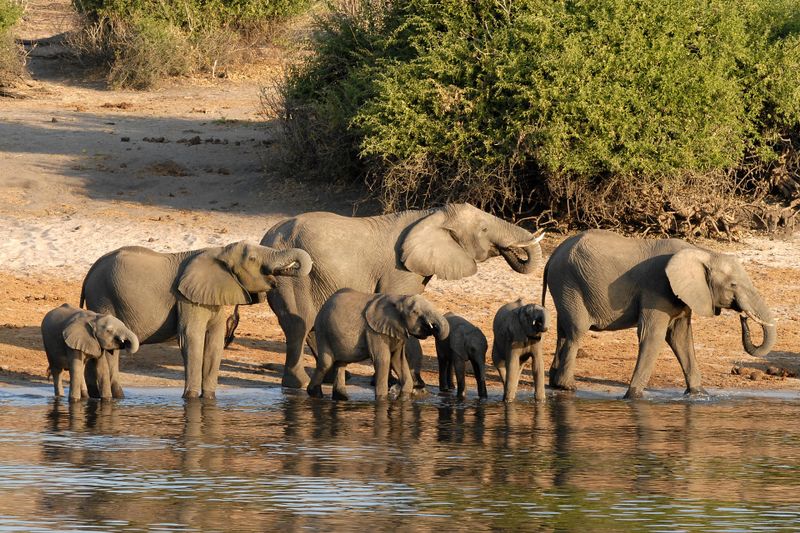 Although the population has slightly decreased over the last years, Botswana remains Africa’s elephant stronghold. The country is home to the continent’s largest elephant population – 130,451 individuals according to the last census. It hosts one-sixth of the world’s elephants.

During the dry season, Chobe National Park counts around 50,000 individuals, and they are said to be some of Africa’s largest specimens.

The Okavango Delta is a favorite among elephants who simply adore these flooded grasslands. Elephants have been observed to drink as many as 52 gallons (200 liters) of water at a time. A UNESCO World Heritage Site, the delta offers “political refuge” to many endangered animals that continue to migrate from neighboring countries.

An impressive way to spot elephants in their natural habitat is during a mokoro safari, a traditional dug-out canoe used in the Okavango Delta.

Travelers can see them spending time in the water and taking mud baths, which protect them from parasites and the sun. If they’re lucky, they might even see elephants swimming. During the rest of the day, they mostly search for food – they eat around 300 lbs (136 kg) of food daily, consisting mainly of grass, bark, and other plants.

Interested in visiting Botswana but don’t know where to go? Check out our article about the top national parks to visit in Botswana. 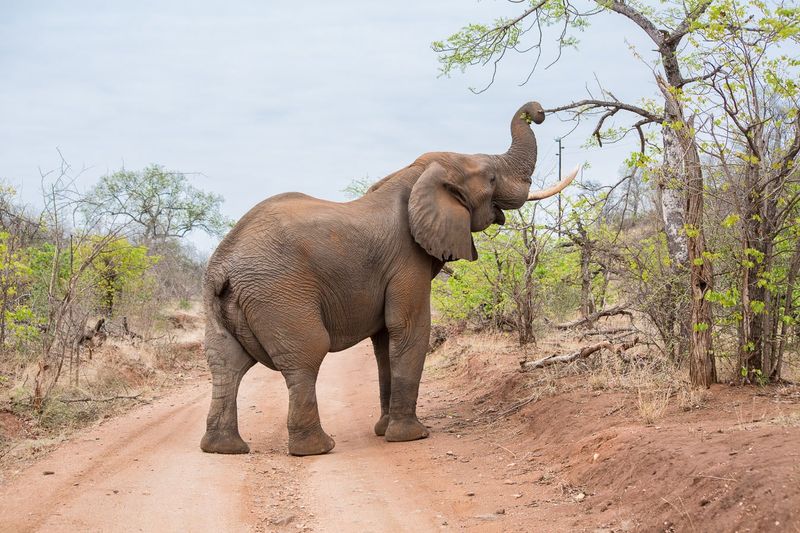 South Africa is one of the few countries on the continent where the elephant population appears to be increasing at a steady rate, currently counting 17,433 savanna elephants.

In Kruger National Park elephants can be seen in large herds. They are the park’s main draw as it’s one of the few parks in Africa where you have a reasonable chance to spot elephants throughout the year.

Addo Elephant National Park, near Port Elizabeth, holds a few records of its own. It is South Africa’s third-largest park, home to the world’s densest elephant population, and the only park on Earth to be home to the “Big Seven” – in addition to the Big Five, travelers can see southern right whales and great white sharks.

Heading to South Africa? Check out our article about the top nationals parks to visit in South Africa! 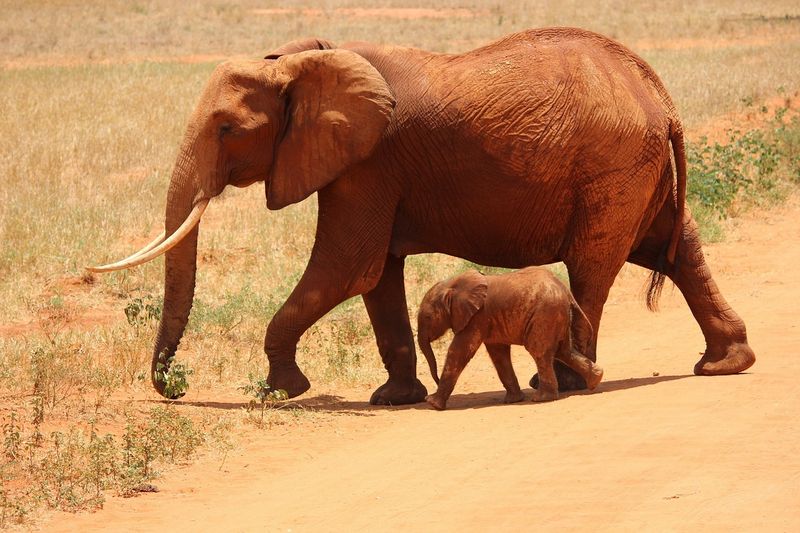 Kenya also deserves a place on our list with an estimated 25,959 savanna elephants and a stable population. Together, Tsavo East and Tsavo West form the largest protected area in the country and are home to Kenya’s largest elephant population.

Amboseli National Park is one of the most scenic parks where you can spot elephants in Kenya. With the stunning Mt. Kilimanjaro as background, the dry plains where the giants roam provide amazing photo opportunities and plenty of chances to be in awe of nature.

Samburu National Reserve is another place to find elephants in big herds. Many of them are habituated to vehicles so experiencing amazing encounters with these beautiful animals is quite the norm here.

Planning a trip to Kenya but don’t know where to head to? Check out our article about the top national parks to visit in Kenya! 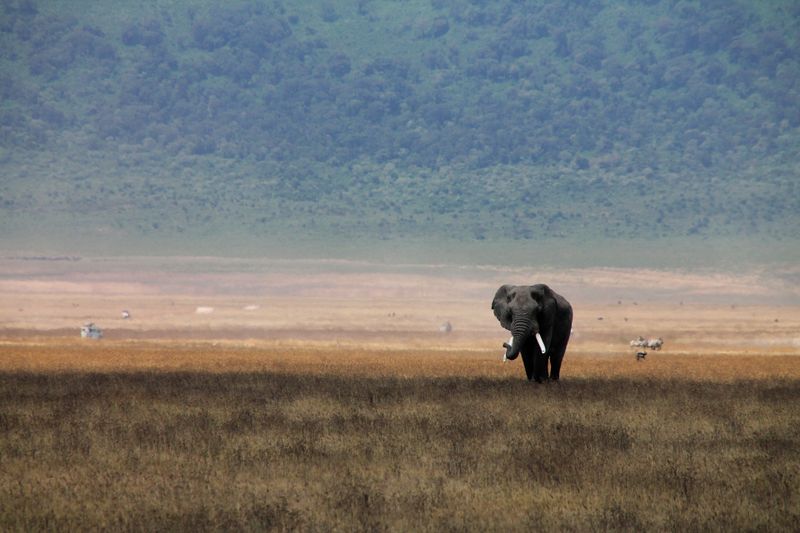 Tanzania is currently home to 42,870 savanna elephants scattered along the country’s national parks and nature reserves. Despite the numbers, wildlife organizations warn us that Tanzania’s elephant population might become extinct if serious measures are not taken soon to reduce poaching. Unfortunately, the population has declined by 60% over the last five years.

Tarangire National Park, while not as famous as Serengeti National Park or the Ngorongoro Crater, is known for its massive baobabs trees which support a large population of elephants. During the dry season (June to October), they make their way to the only source of water – the Tarangire river – so the chance to spot them is really high.

In fact, chances are good to observe elephants if you embark on a Northern Circuit safari – visiting not only Tarangire but also Serengeti and Ngorongoro Crater. The latter is home to big, old bull elephants with large tusks which can be often seen roaming the crater.

Traveling to Tanzania? Here’s everything you need to know to have an amazing experience in Tanzania! 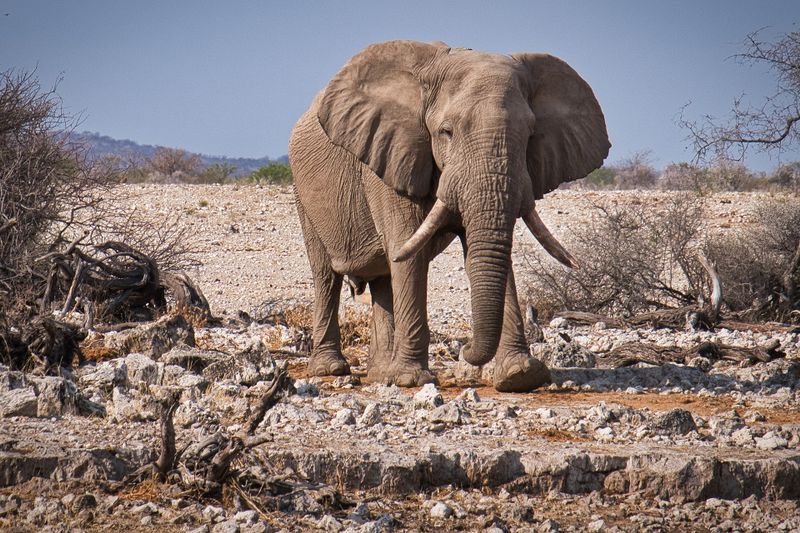 Namibia’s desert elephants are not a separate species, but they do have their particularities – they have adapted to the harsh conditions of the desert. They are smaller, have longer legs, and can travel long distances between water sources.

Sadly, being special also means that they are threatened by extinction. Desert-dwelling elephants still inhabit the Kunene Region in northwestern Namibia, where approximately 600 souls roam the arid plains.

To see elephants in Namibia you need to travel north, into Damaraland and towards the Skeleton Coast. Here, elephant families roam ephemeral rivers alongside other majestic creatures such as black rhinos, giraffes, and zebras.

However, you can also spot elephants in Etosha National Park. They are considered the tallest in all of Africa and don’t have long tusks – probably because they had to adapt to the harsher environment. Make sure to plan your trip during the dry season (July to September) when the chances to catch a glimpse of them is higher around waterholes.

Looking to visit Namibia but are not sure what you can do here? Check out our article about the best things to do in Namibia. 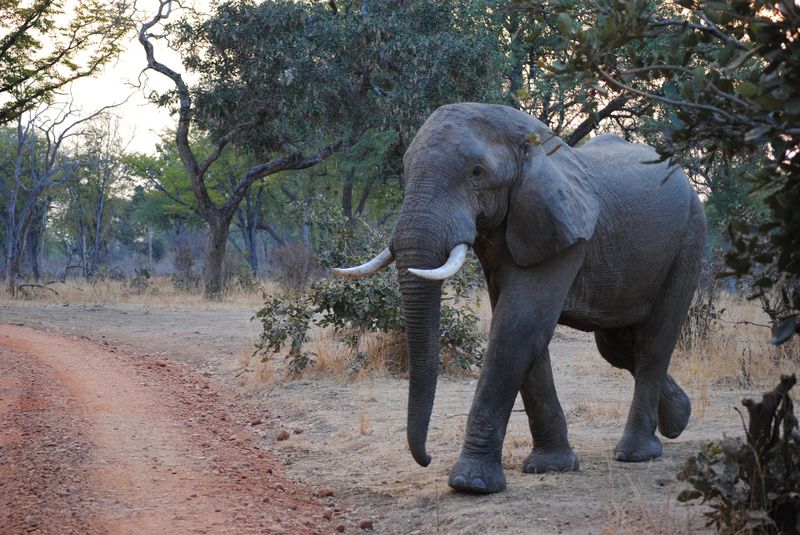 The best place to see them is in Lower Zambezi National Park. They love to stay by the river where great herds can be observed playing. Fortunately for visitors, many lodges are located on the banks of the river, offering excellent opportunities to spot these magnificent animals right from the communal camp areas.

South Luangwa National Park is also a great place to get a glimpse at the elephants by the water and even in the bushes. 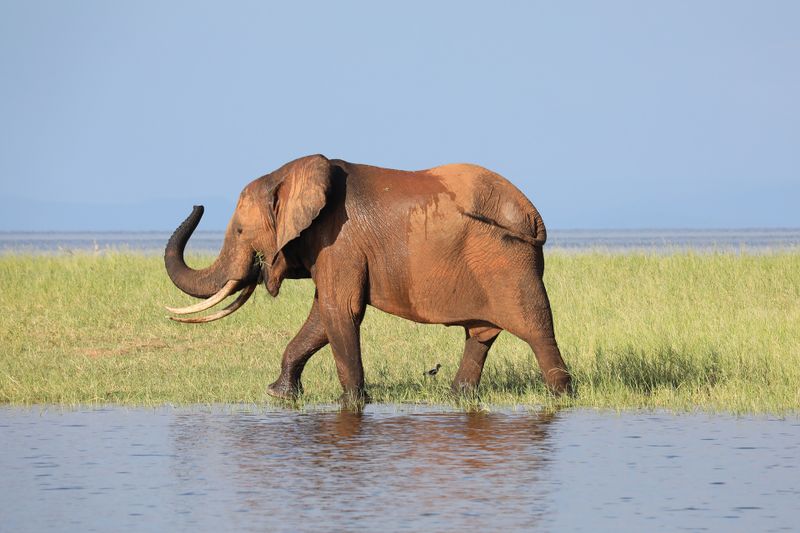 Hwange National Park stands near the border between Botswana and Zimbabwe. It is an enormous woodland where elephants roam freely between the two countries, foraging between Chobe and Zambezi rivers, as well as in the park’s waterholes.

As previously mentioned, the waterholes are the best places to spot these magnificent animals. Just find a place in the shade and wait for the show to start in the afternoon. Males are the first to arrive, followed by the calves and watchful mothers, all led by the regal matriarch. The best time to visit is during the dry season, from August to October.

At the beginning of the 20th century, there were somewhere between three and five million elephants roaming the African bushes. According to the latest Great Elephant Census, there are only 352,271 wild savanna elephants across 18 African countries.

Despite their dwindling numbers, they remain an example of resilience. They have been around since the ice age, when mammoths wandered the Earth, and will probably continue to adapt to the ever-changing environment.

With consistent conservation efforts as well as a little bit of help from our part such as going on conservation safaris and donating to support wildlife conservation, their situation might just take a turn for the better.

There’s nothing quite like being face to face with the largest land mammal on Earth. For a truly unforgettable experience, book one of the Big Five Safaris that are guaranteed to show you just how awesome elephants really are!