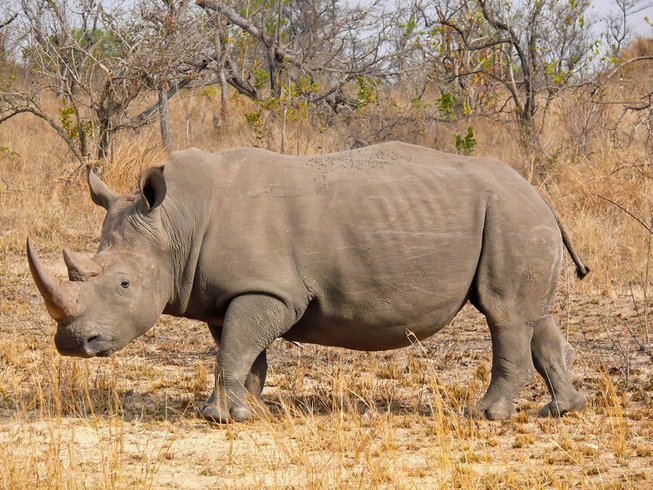 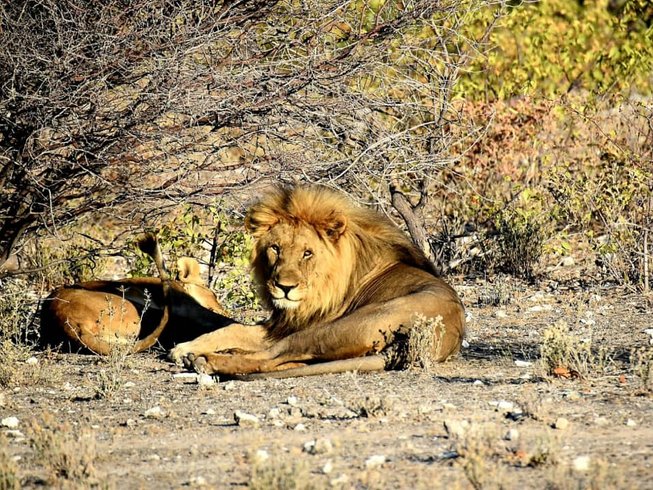 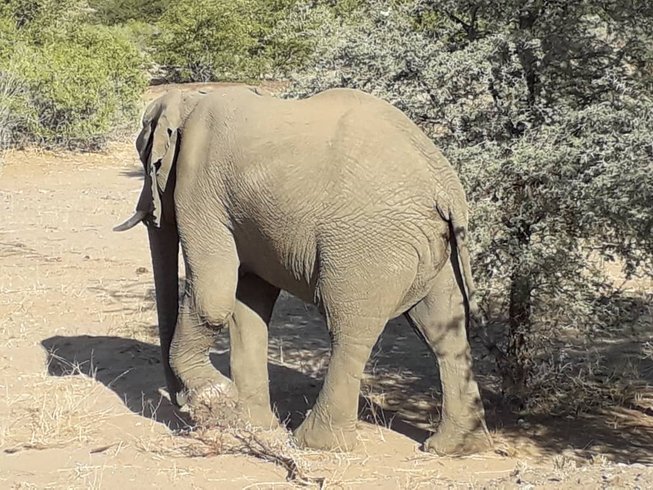 Login to save to your favorites
“Get a taste of Namibia.”
​
Photo
all media

Join this tour with Motema Tours and Safaris Namibia and explore Etosha National Park, Himba Village, Dune 45, Deadvlei, Sossusvlei Sesriem Canyon, Naukluft Park, Namib Desert, and many more! Spot and observe groups of springboks, zebras, rarer species such as the black-faced impala (endemic to Namibia) or the dik-diks, the smallest African antelope. Visit the Twyfelfontein site which has one of the largest concentrations of rock engravings in Africa and go looking for sea lions, dolphins, pelicans, cormorants and possibly the rare fish, mola-mola!

During this tour, you will be staying at various accommodations in the following locations:

You will be collected at your Windhoek accommodation between 09:30 and 10:30 or at the airport if just arrived and note that the hours will not be the same as stated above.

At Windhoek Airport or at your accommodation, discover the caring smile of your tour guide. He will quickly take you to the heights of the capital. Departure towards Otjiwarongo passing by the craft market of Okahandja.

When the stars light up the Namibian sky, you gather around a friendly table to listen to your guide’s information to discuss the journey ahead - this will happen daily until the last day of your tour.

After breakfast, depart with your guide north to Okaukueyo. It is in the animal park of Etosha that your stilt continues. They offer you time to observe the animals! Photo enthusiasts will have to bring along their equipment and patience to capture the unusual encounters with wildlife. You will be able to observe the groups of springboks, zebras, etc., but also the rarer species such as the black-faced impala (endemic to Namibia) or the dik-diks, the smallest African antelope. The interactions between the animals around the waterholes are often magical in Etosha, where you may come across the path of a leopard or a group of lionesses hunting!

A full day’s worth of game driving awaits and you leave early to enjoy the cool morning air. After a tasty private breakfast of the lodge, it is in the animal park of Etosha that you will continue your day. You will discover abundant wildlife that you can observe on the “pan” or around the many water points of the reserve. Your guide will give you information on the species encountered.

You will take up the animal safari with your guide and private vehicle in the park. Established in 1907, Etosha is home to 114 mammal species and more than 340 bird species. This park is one of the largest game reserves in the world. So, take advantage and do not forget your binoculars too long: you never tire of scanning the horizon for having flushed a cat under an acacia or a troop of elephants strolling nonchalantly through the huge Salt Lake that gave his name at the park.

After a tasty breakfast, you will hit the road to Twyfelfontein (Damaraland region) through the Petrified Forest National Monument of 1950. The site includes huge fossilized tree trunks, aged over 250 million years. In the afternoon, visit the Twyfelfontein site which has one of the largest concentrations of rock engravings in Africa. Most of these works are well preserved presenting rhinos, elephants, ostriches and giraffes, as well as footprints of men and animals.

Departure towards Uis, a mining village from where you will see the Brandberg, the highest peak of Namibia. Thereafter continue with the Tour to a Historic Town called Swakopmund.

Swakopmund is a small oceanfront town, bordered on the south by Swakop Wadi and Coastal Dunes. The coolness of the Benguela current will allow you to have pleasant walks by the sea or in the dunes. Some lodges also offer spa treatments (especially massages) which, at this point is an essential after several days on the Namibian slopes (massage).

On the way you will see the Brandberg, Himba and Herero people. Free afternoon.

Early morning, departure to a town just a few kilometers from Swakopmund named Walvis Bay. This is where Namibia’s main harbor is located. A boat trip on the lagoon leads you to search for dolphins and sea lions (not private).

A good morning on the Atlantic Ocean by boat, looking for sea lions, dolphins, pelicans, cormorants and possibly the rare fish “Mola-Mola”. This sea walk allows you to discover the aquatic life of the coast in the best possible conditions, on a comfortable and spacious boat, usually a catamaran with a maximum capacity of 25 people.

Did you know that the Atlantic in Namibia is home to so many sea lions? You will observe them this morning from a catamaran.

In the afternoon, free time in the confusing “balnéiare” city of Swakopmund, founded by the German commander Curt Von Francois in 1892. The objective was to create a competing port of the one of Walvis Bay (held by the English) to put into service a naval line between Hamburg and Namibia from 1899. This was to facilitate the supply from Germany and support the colonization of the region.

Let your mind wander as your eyes wander over the landscapes of the pre-Namib and its crumpled reliefs: your guide will drive you to the gates of the Namib Naukluft Park. The Namib Desert is one of the oldest and driest deserts in the world, covering more than 15% of the country along the Atlantic. It nevertheless extends over 2000 km, along the coast of South Africa and to the Angolan border. Sand accumulation and dune formation range from 40 to 15 million years.

To end of the day, get flexible with your guide and have a short hike: initiation flora and fauna! The fauna migrates freely in the heart of this huge space: oryx, springboks, but also ostriches and many birds such as the Gangas or Auricous vultures adapted to desert conditions.

Accommodation will be at a lodge around Sossusvlei area.

A pre-dawn start is essential this morning as you want to catch the soft light of the sunrise on the desert. Landscape photo opportunities abound in the cool of the morning, with dawn’s soft light first illuminating the dunes from crest down the back slope, then blazing orange everywhere, creating a powerful contrasting vista across the whole desert. Ancient mineral pans, stunted camel thorn trees and the chance of seeing a gemsbok or ostrich makes it essential to remember your camera!

You will have a breakfast in the Namib Desert before going up the Dunes. You will spend the morning in and around Sossusvlei and Deadvlei, also visiting dune 45. Sossusvlei is where you will find the iconic red sand dunes of the Namib. The clear blue skies contrast with the giant red sand dunes to make this one of the natural wonders of Africa and a photographer’s heaven.

The ancient clay pan at Deadvlei was once an oasis, studded with acacias and fed by a river that suddenly changed course, leaving the earth to dry up along with the trees it previously supported. So dry were the climatic conditions that the trees never decomposed - instead they were entirely leached of moisture so that today, 900 years later, they remain as desiccated, blackened sentinels dotting the pan’s cracked surface. Surrounded by the red-pink dunes of the Namibia Desert, they create a surreal spectacle that is a photographer’s dream.

Dune 45 is renowned for its elegant shape, which - along with its position close to the road - have earned it the distinction of ‘most photographed dune in the world’. If you’re not keen for the strenuous hike to the top of Big Daddy, Dune 45 is a more forgiving alternative, standing at only 80 meters and featuring a much gentler gradient.

After the visit of the reddish Dunes, you will take a short excursion to the Sesriem Canyon. Sesriem Canyon, a deep chasm carved through the rocks by water, is a striking natural feature of the area that is best explored on foot. Stony walls rise up sharply on both sides of the canyon, while birds roost in its crags and lizards dart along the ledges. The canyon’s name was coined when early settlers used it as a water source, using six lengths of leather (‘ses riem - six thongs) tied together to lower buckets into the water at the base of canyon.

After the excursion, you will have lunch. And return to the lodge for the overnight.

After breakfast, departure to Kalahari via Maltahohe. The Kalahari is the last bastion of the San people with the modern world having enveloped all the other areas they once roamed. This area of Namibia is typically made up of red sands covered in thin, mostly golden grass and dotted with acacia trees and wildlife. Visit of the Bush Man.

After a quiet breakfast at the lodge, drive to Windhoek, where you will arrive in the late morning or early afternoon.

You will have some time to visit the city with your guide or do some shopping, before being transferred to the international airport.

Note that if you have a flight to catch you must be at the airport 2 hours before take-off time, and it takes approximately one hour between the city center and the airport. Welcome back and thank you!

Transfer available for additional US$21 per person

Please book your flight to arrive at Hosea Kutako International Airport (WDH). Transfer from and to the airport is not included. Motema Tours and Safaris Namibia offers airport transfer service at 300 NAD for one person or 250 NAD for two persons and more.

Upon your arrival in Namibia, they will be first to welcome you to this great country of breathtaking views. Their professional and friendly drivers will be waiting for you at the arrival hall with a “welcome name board” and will assist you with your luggage to the vehicle.