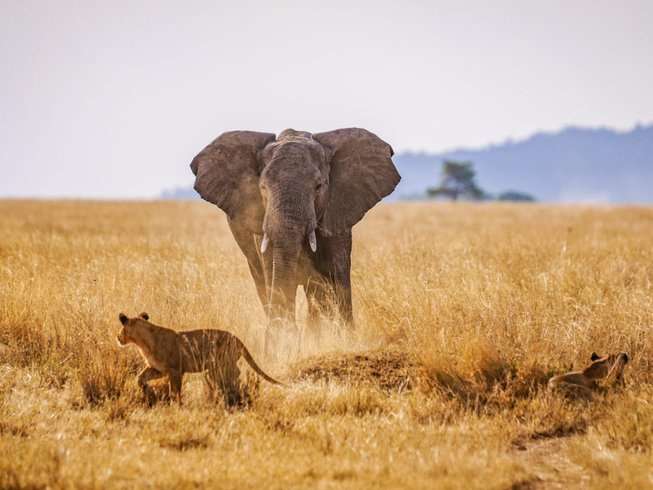 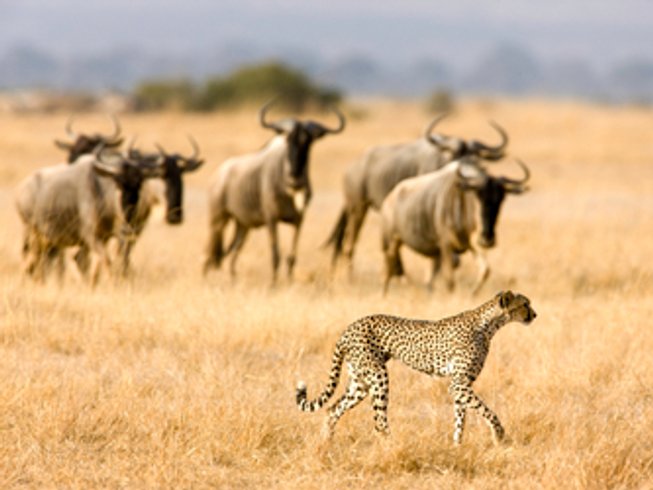 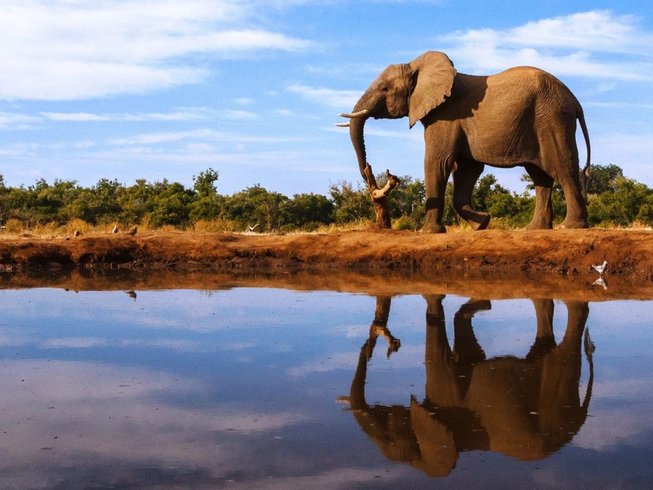 Login to save to your favorites
“Witness An Amazing African Wildlife Spectacle!”
​
Photo
all media

This unforgettable Tanzanian safari journey will take you to the Ngorongoro Crater, featuring one of the highest concentrations of game in Africa. Here you will witness an amazing spectacle of African wildlife. The tour will further take you to the Serengeti National Park, into the heart of wild Africa, where everyday brings a new landscape and a new adventure. You will visit the Lake Manyara National Park, one of Tanzania’s most dramatically located wildlife areas, consisting of a shallow but huge soda lake, at the foot of the Great Rift Valley’s western escarpment.

During this safari, you will be accommodated in single or double rooms in lodges or hotels near the national parks you'll be visiting.

Pick up from Arusha and transfer to Lake Manyara National Park. You will arrive in time for lunch at the lodge and after lunch, you will head into the Lake Manyara National Park for an afternoon game drive. This national park is one of Tanzania’s most dramatically located wildlife areas, consisting of a massive but shallow soda lake (covering two-thirds of the park), located at the foot of the Great Rift Valley’s western escarpment.

The park’s varied habitat attracts a wide variety of animals, including one of Africa’s largest concentrations of elephants, Lake Manyara’s unique tree-climbing lions, as well as large flocks of flamingos attracted by the algae in the lake. Dinner and overnight at the lodge or hotel.

You will head to the central park area, known as the Seronera area, one of the richest wildlife habitats in the park, featuring the Seronera River, which provides a valuable water source to this area and therefore attracts wildlife well representative of most of the Serengeti’s species. You'll arrive in time for lunch and enjoy an afternoon game drive in the Serengeti National Park. Dinner and overnight at the lodge or hotel.

You will have an after breakfast game viewing drive along the Sogore River circuit, which loops into the plains south of the Seronera River, and which is good for possible lion, Thomson gazelle, topi, ostrich, and cheetah sightings. The Visitor Centre close to the Serengeti Seronera Lodge and public campsites, is well worth a visit after the morning’s game drive.

This nicely designed center offers some interesting wildlife displays as well as a gift shop selling information leaflets and maps of the area. The center also has a shop where cold drinks and snacks can be purchased, as well as a picnic area and information trail up and around a nearby kopje. You will enjoy a relaxed picnic lunch at the center in the shade of the giant acacia trees.

In the afternoon, you will follow the Kopjes Circuit, which goes anti-clockwise around the Maasai Kopjes, which usually attract a number of lion and some formidably large cobras. Kopjes are weathered granite outcrops, scattered around the plains, most of which are miniature ecosystems, providing shade and drinking water in pools left in the rock after the rains, this makes the kopjes particularly good for spotting wildlife in the dry seasons - including lions, which like to lie in wait for animals coming to drink! Dinner and overnight at the lodge or hotel.

After breakfast at the lodge, you will depart to Ngorongoro Conservation Area. You will have a stopover at Olduvai Gorge, boasting with a history dating back to the dawn of time. It was here, that the anthropologists Drs. Lois and Mary Leakey discovered the skulls of ‘Nutcracker Man’ and ‘Handy Man’, both very significant links in the chain of human evolution.

You'll arrive in time for lunch at the lodge and after lunch, you will descend over 600 meters into the crater to view wildlife for a half day’s safari tour. Supported by a year-round water supply and fodder, the Ngorongoro National Park supports a vast variety of animals, which include herds of wildebeest, zebra, buffalo, eland, warthog, hippo, and giant African elephants.

Another big draw card to this picturesque national park is it’s dense population of predators, which include lions, hyenas, jackals, cheetahs and the ever-elusive leopard, which sometimes requires a trained eye to spot.

You will visit Lake Magadi, a large but shallow alkaline lake in the southwestern corner, which is one of the main features of the crater. A large number of flamingos, hippos and other water birds can usually been seen here. Dinner and overnight at the lodge or hotel.

Enjoy breakfast, after which you will be transferred back to Arusha. Upon arrival in Arusha, you will have lunch and end this safari.

Stretching for 50 kilometers along the base of the rusty-gold 600-meter high Rift Valley escarpment, Lake Manyara is a scenic gem, with a setting extolled by Ernest Hemingway as “the loveliest I had seen in Africa”. The compact game-viewing circuit through Manyara offers a virtual microcosm of the Tanzanian safari experience.

Contrasting with the intimacy of the forest is the grassy floodplain and its expansive views eastward, across the alkaline lake, to the jagged blue volcanic peaks that rise from the endless Maasai Steppes. Large buffalo, wildebeest and zebra herds congregate on these grassy plains, as do giraffes - some so dark in coloration that they appear to be black from a distance.

Inland of the floodplain, a narrow belt of acacia woodland is the favored haunt of Manyara’s legendary tree-climbing lions and impressively tusked elephants. Squadrons of banded mongoose dart between the acacias, while the diminutive Kirk’s dik-dik forages in their shade. Pairs of klipspringer are often seen silhouetted on the rocks above a field of searing hot springs that steams and bubbles adjacent to the lakeshore in the far south of the park.

Manyara provides the perfect introduction to Tanzania’s birdlife. More than 400 species have been recorded, and even a first-time visitor to Africa might reasonably expect to observe 100 of these in one day. Highlights include thousands of pink-hued flamingos on their perpetual migration, as well as other large waterbirds such as pelicans, cormorants, and storks.

Tanzania’s oldest and most popular national park, also a world heritage site and recently proclaimed a Seventh Worldwide Wonder, the Serengeti is famed for its annual migration, when some six million hooves pound the open plains, as more than 200,000 zebra and 300,000 Thomson’s gazelle join the wildebeest’s trek for fresh grazing.

Yet even when the migration is quiet, the Serengeti offers arguably the most scintillating game-viewing in Africa: great herds of buffalo, smaller groups of elephant and giraffe, and thousands upon thousands of eland, topi, kongoni, impala, and Grant’s gazelle.

The spectacle of predator versus prey dominates Tanzania’s greatest park. Golden-mane lion prides feast on the abundance of plain grazers. Solitary leopards haunt the acacia trees lining the Seronera River, while a high density of cheetahs prowls the southeastern plains.

Almost uniquely, all three African jackal species occur here, alongside the spotted hyena and a host of more elusive small predators, ranging from the insectivorous aardwolf to the beautiful serval cat.

But there is more to Serengeti than large mammals. Gaudy agama lizards and rock hyraxes scuffle around the surfaces of the park’s isolated granite kopjes. A full 100 varieties of dung beetle have been recorded, as have 500-plus bird species, ranging from the outsized ostrich and bizarre secretary bird of the open grassland, to the black eagles that soar effortlessly above the Lobo Hills.

Popular the Serengeti might be, but it remains so vast that you may be the only human audience when a pride of lions masterminds a siege, focused unswerving on its next meal.

The Ngorongoro Crater lies at the centre of the fascinating and unusual Ngorongoro Concervation Area. This area has an extraordinary volcanic landscape that is rich and fertile, with stunning craters and lakes. Whereas its high altitude creates a malaria-free micro climate, it extends through the Crater Highlands, in which local tribes are permitted to maintain their traditional lifestyles in as natural environment as possible.

The Ngorongoro Crater is said to have the most dense concentration of wildlife in Africa. As such, it has achieved world renown, and attracts a growing number of visitors each year. Even if time is limited this natural but accessibly small caldera ensures a rewarding safari.

The Ngorongoro Crater is the world’s largest intact caldera in an exceptional geographical position, forming a spectacular bowl of about 265 square kilometers with sides up to 600 meters deep. It is the stalking ground of 20 to 30,000 wild animals at any one time.

The crater floor consists of a number of ecological environments that include grassland, swamps, forests and Lake Makat, a central soda lake filled by the Munge river. All these various habitats attract various wildlife to drink, wallow, graze, hide or climb.

Although animals are free to move in and out of this contained environment, the rich volcanic soil, lush forests and spring source lakes on the crater floor tend to incline both grazers and predators to remain throughout the year.

During this safari, your daily breakfast, lunch, and dinner will be provided. Vegetarian and regular food will be served.

Be one of only a few fortunate people to glide in a Hot Air Balloon over the Serengeti Plains (available at supplementary cost by pre-arrangement). Floating silently above the awakening bush, while spotting wildlife and enjoying the amazing scenery of Africa, across rivers and over numerous small villages.

Please book your flight to arrive at Kilimanjaro International Airport (JRO) and transfer from and to the airport is included. Lappet Faced Safaris will pick you up from the airport.