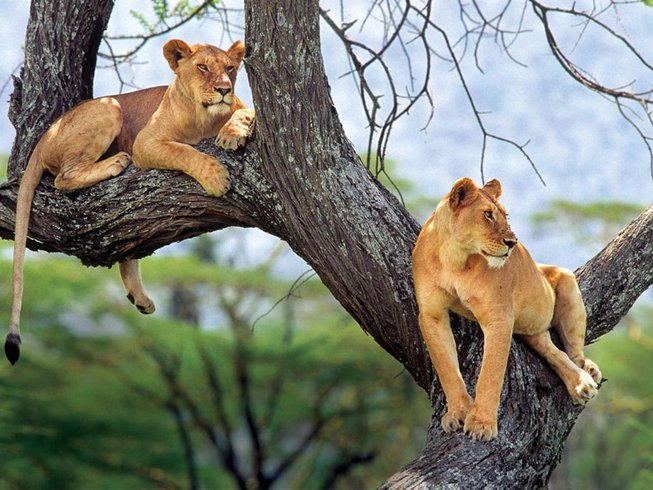 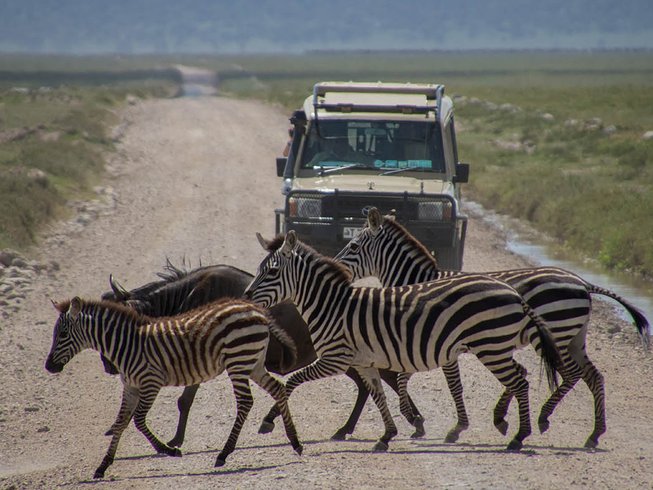 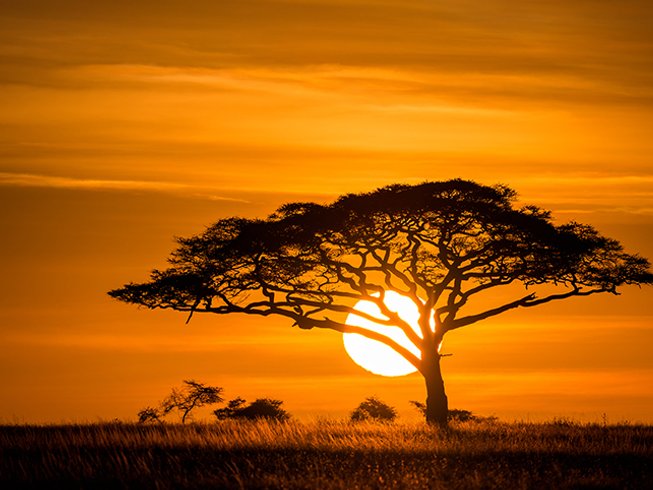 Are you ready to go on a fantastic wildlife experience in Tanzania? This package is Lappet Faced safaris' typical five-day Tanzania Wildlife safari that includes game viewing (wildlife game drives). This means that you will go on a guided safari in all days you will be on this Tanzania safari. This safari, however, means that you should have the flexibility to start early on the first day.

You will stay at campsites such as Marera Valley Lodge or similar at Karatu town, Thorn Trees Camp Central Serengeti, Ngorongoro Rhino Lodge at the Crater rim or similar in Karatu Town. Please note that the package does not include accommodation in Arusha, but there are best lodges and hotels in and around Arusha city which can go along with your budget. Please let Lappet Faced Safaris know if you will need any assistance from them.

After breakfast at you lodge in Arusha our safari driver guide will meet you and you will depart for Tarangire National Park via Arusha town just in case of any last minute purchase before heading to the park. The driving will be on the Great Northern highway and across Masai steppe and many villages.

The Main features of this park is lager population of elephant, Tarangire River which is a permanent water source in the entire park and the huge baobab tree that dwarfing some animal species that cometh beneath it. You may expect to spot herds of wildebeest, buffalo, elephant, zebra, giraffe, hippos and many antelope.

Primates like baboons, blue monkey, velvet monkeys are also inhabit the park, lion, hyena, jackals and the ever-elusive leopard which needs sharp eyes to sport can also be seen.

Later afternoon drive across the Great East African Rift Valley for sunset watch and to Marera Valley Lodge for dinner and overnight.

After breakfast, depart for Serengeti National Park, the driving is via attractive high lying farmland of Karatu and up to Ngorongoro gate, after check in you will drive more up and along the Crater rim, you may stop for some nice pictures at the crater view point. More drive around the Crater rim and down to the “Wild rich” The Serengeti National park with its endless rolling plains.

On the way, you will visit one of the Masai village whereby some Masai warrior invites you and gives you a brief story of their life around this area, questions and answer session before enter to their small houses to meet kids and members of the family. Later they will sing and dance their famous song which involving jumping high. From there drive further with en-route game drive to Naabi Hills Gate for check in before heading to the Central Serengeti park area called Seronera.

Seronera is the richest wildlife habitats in Serengeti, endowed with Seronera River, the main water source in the area that attracts abundance of wildlife well representative of most of the Serengeti’s species. Picnic lunch will to be served at the kopjes (Rocky outcropping). Afternoon game drive in search of the Wildebeest Migration, late drive to your lodge during or before the sunset for dinner and overnight.

Your 5 days Tanzania lodge safari continue and today your guides are taking you for full day game drive in the Serengeti. You will start as early as 06:30 with packed breakfast box and lunch box. Early morning game drive allows you to spot the cat family on the road as they try to avoid the morning mist, you may also see nocturnal animals coming back from their long night of hunting or a group of lioness organizing an ambush or eating along the road.

Break for breakfast in the bush then you will be heading to where the Wildebeest migration is packed. Spend much time watching the migration of herds, the big cats and others (packed lunch will be served in the bush or in one of the picnic site in the area. You may expect to see a lot of animal actions like hunting, killing, fighting and so on. Drive back to the camp during or before the sunset, dinner and overnight in the Camp.

On this day as early as 06:30 you can do another early morning game drive carry your breakfast and lunch box. Spend much time in Serengeti doing game drives before starting your en-route game drive towards Ngorongoro Conservation Area. Arrive at the lodge sunset watch at the Crater rim, dinner and overnight.

Another big surprise in this picturesque crater is the denser population of predators which includes lion, cheetah, hyena, jackal and the ever mysterious leopard which require trained eye to spot. You will visit Lake Magadi a shallow alkaline lake which is among the water sources in the crater, some hippos, flamingos and other aquatic birds can be seen in this Lake.

Game drives until afternoon, then start your way out and drive back to Arusha, if not flying the same day you can visit some Masai market or shopping centers on your way to Arusha. Arriving in Arusha late afternoon for overnight.

All accommodation subjected to availability.

End of the service.

This safari takes place in Tanzania. You will visit Tarangire National Park, Serengeti National Park, and Ngorongoro Conservation Area, before returning to Arusha.

Tanzania’s oldest and most popular national park, also a world heritage site and recently proclaimed a 7th worldwide wonder, the Serengeti is famed for its annual migration, when some six million hooves pound the open plains, as more than 200,000 zebra and 300,000 Thomson’s gazelle join the wildebeest’s trek for fresh grazing.

Even when the migration is quiet, the Serengeti offers arguably the most scintillating game-viewing in Africa: great herds of buffalo, smaller groups of elephant and giraffe, and thousands upon thousands of eland, topi, kongoni, impala and Grant’s gazelle.

The spectacle of predator versus prey dominates Tanzania’s greatest park. Golden-mane lion prides feast on the abundance of plain grazers. Solitary leopards haunt the acacia trees lining the Seronera River, while a high density of cheetahs prowls the southeastern plains.

Almost uniquely, all three African jackal species occur here, alongside the spotted hyena and a host of more elusive small predators, ranging from the insectivorous aardwolf to the beautiful serval cat.

But there is more to Serengeti than large mammals. Gaudy agama lizards and rock hyraxes scuffle around the surfaces of the park’s isolated granite kopjes. A full 100 varieties of dung beetle have been recorded, as have 500-plus bird species, ranging from the outsized ostrich and bizarre secretary bird of the open grassland to the black eagles that soar effortlessly above the Lobo Hills.

Popular the Serengeti might be, but it remains so vast that you may be the only human audience when a pride of lions masterminds a siege, focused unswervingly on its next meal.

The Ngorongoro Crater lies at the center of the fascinating and unusual Ngorongoro Conservation Area. This area has an extraordinary volcanic landscape that is rich and fertile, with stunning craters and lakes. Whereas its high altitude creates a malaria-free micro climate, it extends through the Crater Highlands, in which local tribes are permitted to maintain their traditional lifestyles in as natural environment as possible.

The Ngorongoro Crater is said to have the densest concentration of wildlife in Africa. As such, it has achieved world renown and attracts a growing number of visitors each year. Even if time is limited this natural but accessibly small caldera ensures a rewarding safari.

The Ngorongoro Crater is the world’s largest intact caldera in an exceptional geographical position, forming a spectacular bowl of about 265 square kilometers with sides up to 600 meters deep. It is the stalking ground of 20 - 30,000 wild animals at any one time.

The crater floor consists of a number of ecological environments that include grassland, swamps, forests and Lake Makat, a central soda lake filled by the Munge River. All these various habitats attract various wildlife to drink, wallow, graze, hide or climb.

Although animals are free to move in and out of this contained environment, the rich volcanic soil, lush forests and spring source lakes on the crater floor tend to incline both grazers and predators to remain throughout the year.

Ngorongoro Crater is also presently one of the most likely areas in Tanzania to see the endangered Black Rhino, as a small population is thriving in this idyllic and protected environment one of the only areas where they continue to breed in the wild.

Breakfast, lunch, and dinner to be prepared by a professional safari chef, who will also be responsible for pitching your tents and so on. This is a stress-free safari where you don’t need to think about where to sleep what to eat etc. Lappet Faced safaris also invites you to the kitchen to tell the staff if you have any favorites you want to be repeated.