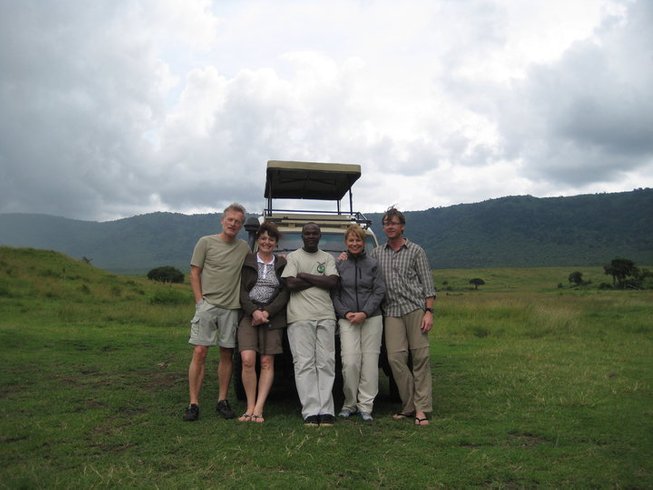 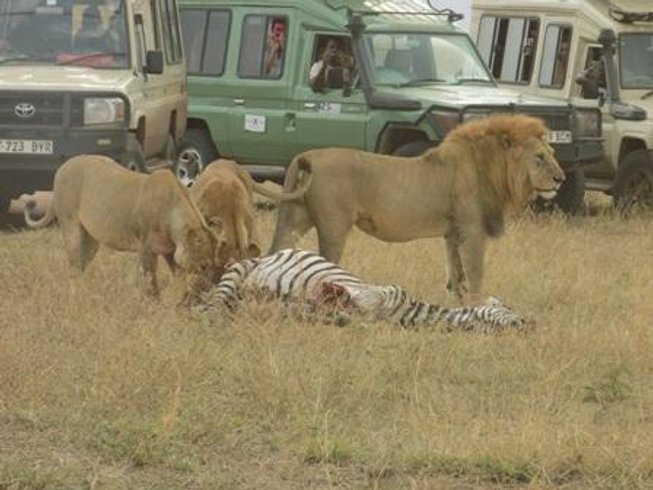 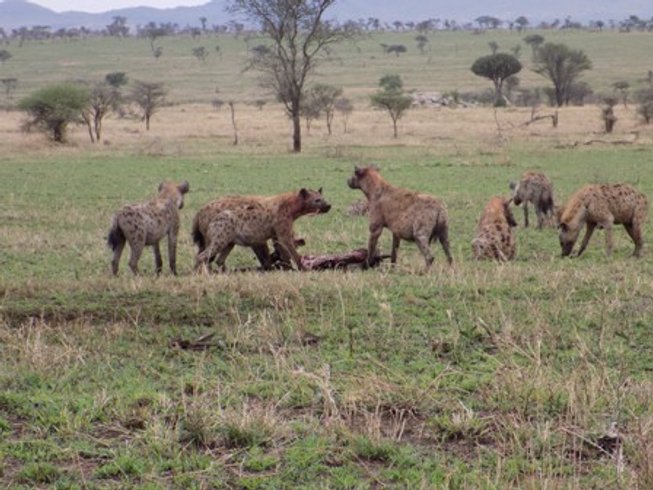 Login to save to your favorites
“Witness Tanzania's wildlife up close!”
​
Photo
all media

You will stay in a Public campsite during your safari.You will be facilitated with complimentary water and soft drinks during the entire safari. In addition, Kiliholidays Tours & Safaris will provide accommodation for two nights at Jevas Hotel within Arusha before and after this safari on a bed and breakfast basis.

Upon your arrival at Kilimanjaro Airport (JRO), you will be welcomed by Kiliholidays transfer driver and taken to Africana Grand hotel within Arusha. The rest of the day will be at leisure and you can either relax at the hotel. In the evening you will attend a briefing in preparation for the upcoming safari. Bed and Breakfast.

In the morning you will be collected from your hotel in Arusha and make your way to Tarangire National Park, known for its large elephant herds. From the open roof of the vehicle, you will scan the seasonal swamps, savannah, and Tarangire River in search of zebras, wildebeests, buffaloes, hartebeest, elephants, giraffes, waterbuck and reedbucks.

With a bit of luck, you will catch a glimpse of a lion stalking its prey or leopards lying lazily in the trees above. After an extensive game drive, having experienced the various sights and sounds of the wilderness, you will leave the park and head to Migombani campsite where you will stay the evening.

After the breakfast plates have been cleared, you will continue toward the fertile highland where wheat, coffee and corn are grown by the Iraqw people. Passing through the Ngorongoro Conservation Area, you will be able to see the breath-taking Ngorongoro Crater before travelling onwards to the Serengeti National Park, which you will reach by midday.

The Serengeti National Park is the largest park in Tanzania with a diversity of landscapes and habitats, such as grassy plains, swamps, lakes, savannah and mountains. Here the biggest wildebeest and zebra migration takes place and depending on season you will have the opportunity to witness thousands of animals on their search for nourishment. You will spend the night at Nyani public campsite in the Seronera area in central Serengeti.

Today you will explore the Serengeti National Park. Your guide will take you closer to where the migrating herds are to be found. During the short rainy season in November and December the herds make their way from the hills in the north to the plains of the south, returning north during the longer rainy season from April to June.

Their exact location differ yearly as they migrate according to the rainfalls, but your guide will know where you will be able to see them best. Lurking close by you might even spot some leopards, cheetahs and lions. After an eventful day you will return to your same Nyani public campsite in the Seronera area for your evening meal and overnight stay.

Early morning you will set out on another game drive in the Serengeti before continuing towards the Ngorongoro Crater. Soon the 600 meters deep unbroken caldera will open up before you and you will have a moment to take in the fantastic, awe-inspiring views of the collapsed volcano. Your campsite lies directly on the crater’s edge, offering a once in a lifetime view as the sun slowly sets over the crater. Nestled in your tent, thinking about the adventure the next morning brings, you will drift off to sleep.

Early in the morning you will head down the forested slopes into the crater on a steep and narrow path. The crater floor is covered in open grassland with the occasional acacia tree and two small wooded areas. Teaming with wildlife, you will be able to see many animals in a short period of time and might even be able to tick the Big Five – lion, elephant, buffalo, rhino and leopard – off your list. Other animals present in the crater area include wildebeest, zebras, gazelles, warthogs, hippos and more than 500 species of birds. You will spend the entire morning exploring the park and after a picnic lunch in the crater, you will return to Arusha where you will arrive by early evening and overnight at Africana Grand Hotel.

After breakfast, you will be transferred to Kilimanjaro Airport. Alternatively, you can extend your trip in Tanzania and go on Kilimanjaro or relax at the Indian Ocean.

On the fifth day of safari, you will have a tour on Ngorongoro Crater.

Mack was born and raised in Arusha, Northern Tanzania in a lovely Ilmaasai tribe family. He is the eighth child of ten and has spent the majority of his career as a Tour Guide covering East Africa. Mack studied Information Communication Technology and has also specialized in the field of Procurement and Supply Management.  However, he feels at home in the African wilderness! Travel and Tourism Management is where his heart lies. As he gained more experience, Mack realized that he wanted to create safaris of his own using the skills he acquired during his travels.

Serengeti National Park is oldest and most popular national park. This park is also a world heritage site and recently proclaimed a Seventh Worldwide Wonder. Furthermore, Serengeti National Park is famous for its annual migration when some six million hooves pound the open plains as more than 200,000 zebras and 300,000 Thomson’s gazelle join the wildebeests’ trek for fresh grazing.

Tarangire National Park is the national park which herds of up to 300 elephants scraped the waterless riverbed for alternative streams while nomadic wildebeests, zebras, buffalos, impalas, gazelles, hartebeests, and eland mass the decrease lagoons.

The park is one of the most attentiveness of wildlife outside the Serengeti ecosystem (a smorgasbord for predators) and has one place in Tanzania where dry-country antelopes such as the stately fringe-eared oryxes and peculiar long-necked gerenuks are regularly practiced. Also, this place is the only national park that holds the migrant during the dry season and home of different species of animal.

The precious stone in Ngorongoro roundoff is a deep, volcanic crater, the leading un-flooded and unbroken caldera in the world. The crater lies from 20 kilometers across, 600 meters deep, and 300 square kilometers in area. It has the wonderful natural wonder.

Kiliholidays offer vegan, vegetarian, regular, and gluten-free food as well. For other dietary requirements, simply tell us in advance. We are happy to work out something and happy to keep your tummy happy.

You can expect anything from omelets to quiches with a variety of salads. Continental breakfast is also typically served with toast, sausage, pastries, charcuterie, cold meat, coffee, and tea. Cereals, fruits, bread, eggs, and cheese are also very common.

More often than not, lunches are served picnic style in the middle of your game drive. Sometimes, guides/drivers also take you back to the lodge or camp for a hearty meal before going on an afternoon or sundowner game drive. Food is usually composed of sandwiches and fruits.

Before setting off to your late afternoon game drive, afternoon snacks or bitings, as it is usually called in East Africa will be provided. Freshly roasted peanuts or cashews, cakes, sandwiches, biscuits, quiches, and tarts are the usuals.

On your final game drive of the day, you will be enjoying alcoholic beverages (think wine and beer) with snacks such as nuts, dried fruits, and savories as you watch the sunset across the wildlife-ridden fields.

Prepared at the lodge or campsite, dinner is usually served in three courses: soup, mains, and pudding. Butternut soup, vegetable curry, and fruit pudding is a very common combo, but of course, there will be a variety during your stay ranging from meat, fish, and pasta dishes served with assorted vegetables and sauces.

For the drinks, it could be anything from water to coffee and tea to wine and beer. Filtered water is typically available but in the event that it’s not, the camp or lodge will either tell you in advance or provide water for you to drink each day.

As a general rule of the thumb, the level of sophistication and the number of options available depending on the lodge’s distance from suppliers. It has been said that “The more remote the lodge, the simpler the menu, and the closer it is to the city center or towns, the more sophisticated the menu.” This can be really be expected but this doesn’t mean you can underestimate the culinary powers of the safari lodge chefs. As a matter of fact, you can be surprised. People with special diets don’t have to worry as well.

Available at the hotel in town but not during the safari.

Transfer available for additional US$300 per person

Transfer available for additional US$300 per person