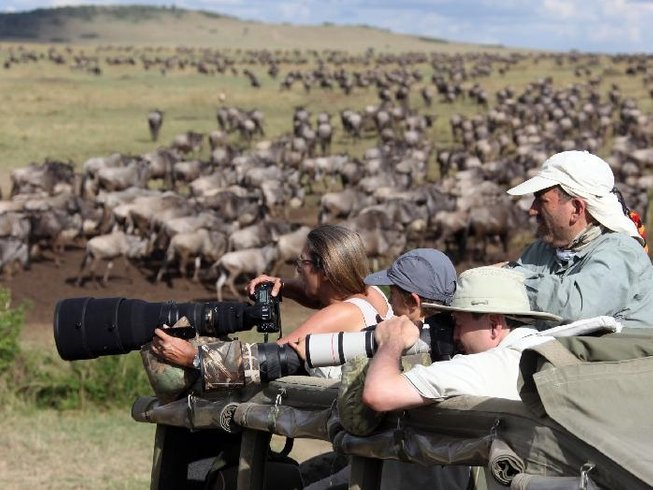 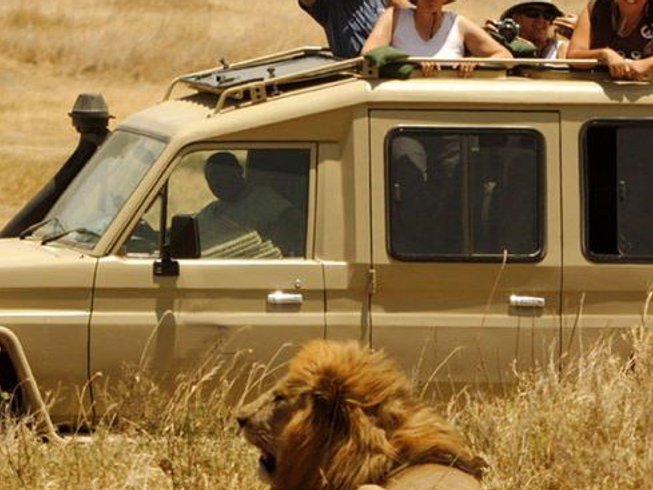 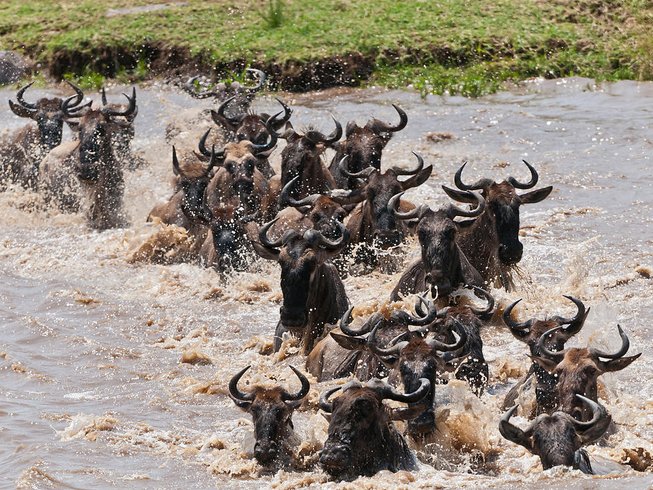 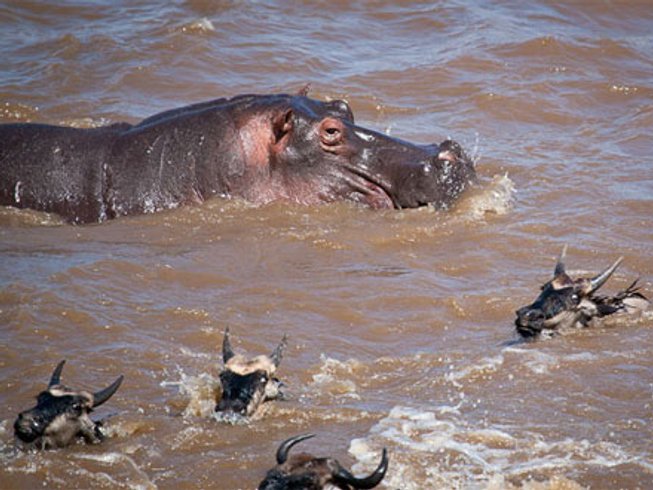 Login to save to your favorites
“Tarangire, Serengeti Park and Ngorongoro crater”
​
Photo
all media

During this 6-day camping safari you will visit the Tarangire National Park, the Ngorongoro Conservation Area and the Serengeti National Park. While this safari has something for everybody – birds, the “Big Five” and a crater filled with wild animals, it is also ideal for those with limited time.

Located in Arusha, a 14-minute walk from Uhuru Monument, Jevas Hotel Arusha provides accommodations with a restaurant, free private parking, a bar, and a shared lounge. Each room at the 2-star hotel has city views and free WiFi. The property has a 24-hour front desk, room service, and currency exchange for guests. At the hotel, each room comes with air conditioning, a seating area, a flat-screen TV with satellite channels, a kitchen, a dining area, and a private bathroom with a hairdryer, a shower, and free toiletries. Guest rooms will provide guests with a desk and an electric teapot. Javes Hotel Arusha has a terrace. Arusha Central Market is a 15-minute walk from the accommodation, while Sakina supermarket is 1.3 miles away.

The Twiga Campsite is set a 10-minute walk from Jambo Campsite. This Mto wa Mbu campsite also includes a play area and toys for guests with children.The villa is 5 minutes drive from Lake Manyara National Park. Twiga Campsite as well as bars and restaurants are in close proximity to the property. Lake Manyara airport can be reached within 15 minutes by car.

Rooms are available in case you will need to upgrade accommodation. Twiga Lodge And Campsite have a separate toilet, a writing table and climate control in its rooms. It also includes a bathroom with amenities, such as slippers and a hot shower. Internet, guest parking, laundry / dry cleaning, and bicycle rental are also available.

Simba A Campsite lies on the very rim of Ngorongoro Crater and has an excellent view across the caldera. A fantastic sunrise over the crater rim opposite makes a fine breakfast scene. Often there are elephants wandering around the camp! This campsite is guarded. Tents have mats and bathrooms are outside of the tent. Facilities at Simba Campsite are basic but this is more than made up for by the atmosphere of this camp in the clouds. The sleeping bags and mattresses are provided.

All accommodation can be upgraded to mid-range lodges or tented camps for a higher price.

Upon your arrival at Kilimanjaro Airport, you will be welcomed by our transfer driver and taken to the Jevas hotel within Arusha. The rest of the day will be at leisure and you can either relax at the hotel or explore the town of Arusha. In the evening you will attend a briefing in preparation of the upcoming safari. Bed and Breakfast

In the morning you will make your way to the Lake Manyara National Park. The park, which stretches along the Rift Valley Escarpment, is named after the shallow alkaline Lake Manyara. The lake can be seen through a hue of pink, due to the large numbers of flamingos, seasonally flocking to its shores. The more than 400 species of birds make this park a bird lovers’ paradise and on any given day 100 different species can be observed.

Apart from the avian inhabitants, giraffes, elephants, monkeys and antelopes can be spotted in the forest, acacia trees and grasslands. With a bit of luck you will be able to catch a glimpse of the famous tree-climbing lions, a somewhat uncommon trait for these large cats. After a thorough exploration of the park, you will leave and travel to the town of Mto wa Mbu, where you will spend the night on a campsite.

After breakfast you will leave Mto wa Mbu and drive through the cooler highland region towards the Serengeti National park. The world-renowned Serengeti National Park, with its diverse landscape ranging from grass plains and dry savannah to marshy woodlands, is the stamping ground of many carnivorous predators and their prey.

The park is home to the largest animal migration in the world and depending on the season you will be able to witness this spectacular event unfold. The herds of wildebeest and zebras journey in the short rainy season of November and December from the hills in the north to the southern plains before returning to the north during the longer rainy season of April to June. The location of the migrating herds is dependent on the yearly rainfall, but your guide will know where the best vantage points for wildlife viewing are. The night will be spent on a campsite in central Serengeti.

As the sun slowly rises over the vast open plains, you will embark on your first game drive of the day. Due to the abundance of prey species, such as gazelles and impalas, the park boasts one of the largest lion populations in Africa as well as other predators such as leopards and cheetahs.

Returning to camp after the game drive you will enjoy a hearty breakfast before leaving the park and driving towards Ngorongoro Crater. Arriving at the crater rim, the 600m deep caldera in all its splendor opens up before you. You will spend the night at a campsite on the crater’s edge, watching the sunset over the glistening springs of the collapsed volcano’s floor.

After an early breakfast you will start your descent on a narrow and steep road to the crater floor. The crater is inhabited by a spectacular array of wildlife, which includes zebras, hippos, hyenas, wildebeests, warthogs, and the famous Big Five – buffalo, rhino, lion, elephant, and leopard. After extensive game viewing and a lunch at a picnic spot, you will leave the crater and travel back to Arusha, where you will arrive in the late evening and overnight at Jevas hotel.

After breakfast, you will be transferred to Kilimanjaro Airport. Alternatively, you can extend your trip to Tanzania and go on treks or relax in the Indian Ocean.

Mack was born and raised in Arusha, Northern Tanzania in a lovely Ilmaasai tribe family. He is the eighth child of ten and has spent the majority of his career as a Tour Guide covering East Africa. Mack studied Information Communication Technology and has also specialized in the field of Procurement and Supply Management.  However, he feels at home in the African wilderness! Travel and Tourism Management is where his heart lies. As he gained more experience, Mack realized that he wanted to create safaris of his own using the skills he acquired during his travels.

The safari starts and ends at Arusha.

Food During the Safari in Tanzania

You will be served daily meals during this safari. To avoid health problems, use only bottled or filtered water for drinking and brushing your teeth. Bottled water is cheap and readily available in Tanzania. The vehicles always come stocked with plenty of bottled water to ensure you remain hydrated while on safari. Kiliholidays serves a glass of wine during Dinner time.

The food served during the safari at all of the campsites are of the highest quality. Gourmet cooks bake fresh pieces of bread and produce soups, salads, and entrées that could easily grace tables at top restaurants around the world.

Meals are international in flavour with soups, salads, cold meats, pasta dishes, meat and fish dishes, breads and other starch.

Your day normally starts with coffee, tea, and biscuits before the morning activity, returning to the campsite late morning when brunch will be waiting. %Buffet brunches are typical with a warm dish such as stew served with salads, quiches, and cold meats. Cereals, fruit, bacon, eggs, sausage, and toast are also usually on offer. Cake and tea are served before the afternoon activity. Dinner consists of an appetizer followed by meat, fish, and pasta dishes served with assorted vegetables and sauces. This is followed by coffee and tea, cheeses, and sinful desserts!

Please book your flight to arrive at Kilimanjaro International (JRO) or Arusha Airport (ARK) then Kiliholidays will pick up you and transfer you to Jevas hotel for an overnight stay as per the itinerary.