6 Days Lake Manyara, Serengeti, Ngorongoro Crater, and Walking at Mto wa Mbu Safari in Tanzania
This listing has no upcoming availability. Check out these similar experiences 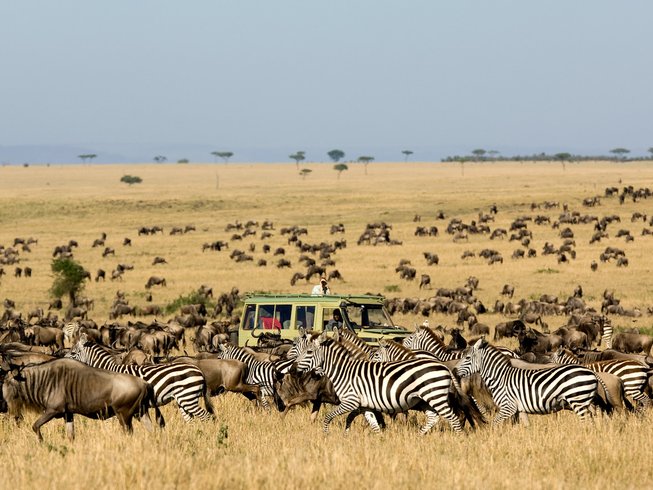 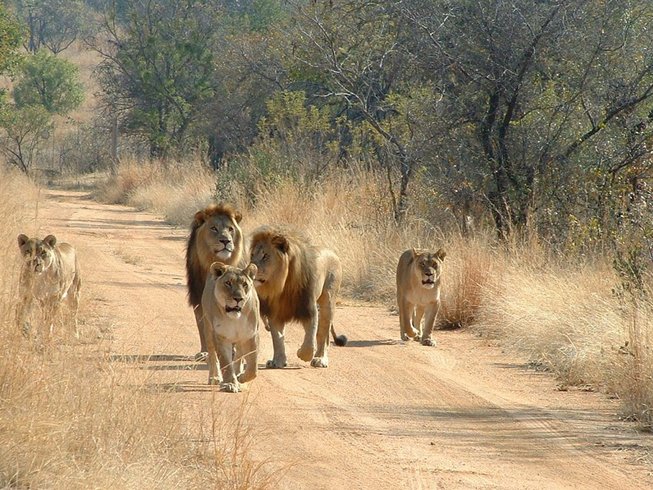 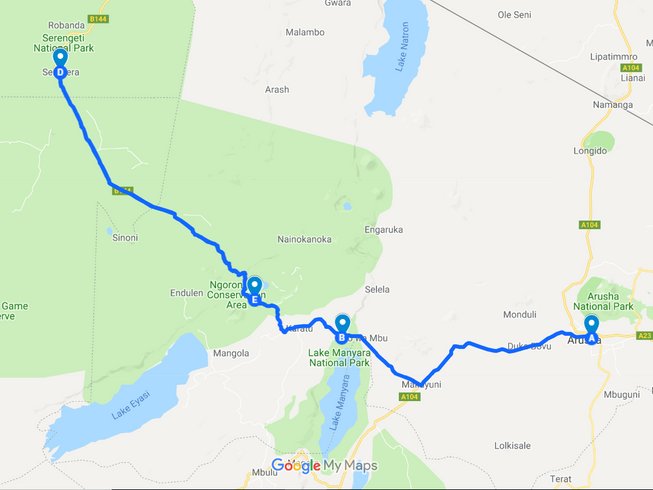 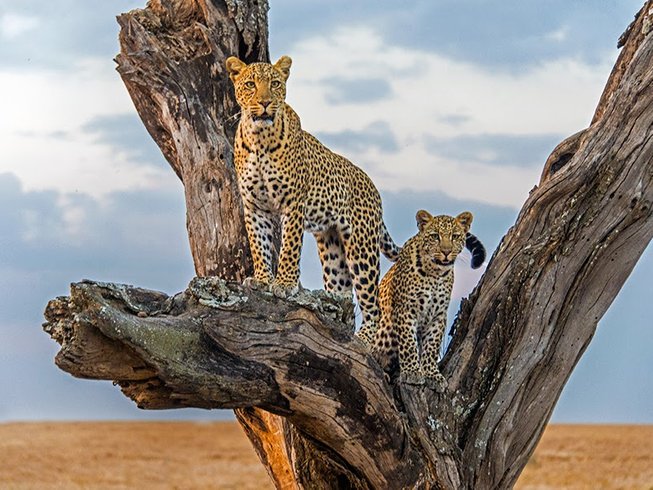 On this camping safari, you will explore four of Tanzania’s top northern nature reserves. You will see swamps and savannah, huge herds of elephants, and a crater full of game. Campsites in Tanzania tend not to be fenced so there is no cause for alarm and no need to fret, you just need to relax as experienced guides look after you and safari cooks treat and spoil you with their excellent culinary skills. By the time you have returned after a day’s adventure, with the sun setting over the savannah and a lion roaring in the distance, you will know that you have left your everyday life far, far away.

Upon arrival, the accommodation will be at Green Mountain Hotel for one night. If you’re looking for a good, comfortable place, Green Mountain Hotel will suit your needs. Safety storage boxes are available, ensuring the protection of property and valuables throughout the guests’ stay at the hotel.

You will stay here on the second and sixth nights. In Panorama Safari Camp, you can have a rest in their exotic beehives shaped bungalows called African Igloos or in permanent tents that are also equipped with convenient beds. They also provide space in case you arrive with your own tent or camper van. The terrace offers breathtaking views of Lake Manyara and Mto wa Mbu village.

From the height of 1240 meters, you can observe special birds, monkeys, butterflies, bugs, and, if you are lucky, a walking chameleon across the garden. The restaurant offers authentic African food made of high quality of meat and fresh vegetables. If you visit it, start the day with fresh mango and pineapple or orange and carrot juice.

The public campsites which are collectively called Seronera Campsite are located in the Central Serengeti area known as the Seronera. Seronera Campsite is one of the most famed campsites in Tanzania for animal encounters. Animals will pass through the campsite at night on their nocturnal wanderings. This campsite is guarded. Tents have mats and bathrooms are outside of the tent.

On this camping safari, you sleep in roomy 1,80 meter (5.10 feet) high canvas tents that all come with comfortable mattresses. Sturdy camping furniture and sensible eating utensils are provided.

Ilmaasai Expedition attaches great importance to the condition and quality of their camping equipment. After every tour, all safari gear is thoroughly cleaned, inspected, repaired, and replaced wherever necessary.

Upon arrival, you will be provided with pre-safari accommodation at Pepe Hotel.

Leave Arusha at 9:00 a.m. and drive for about two hours to Lake Manyara National Park, which is famous for its green scenery, varied bird life, tree-climbing lions, hippos, and baboons. Dinner and overnight will take place on top of the Great Rift Valley at Panorama Campsite.

After breakfast at 8:00 a.m., depart and drive via NCAA Game drive en route to Serengeti National Park. Serengeti is the largest and most famous park in Tanzania, known worldwide for its endless plains, wildebeest-migration, herds of lions and other predators like hyenas, cheetahs, and leopards. Crocodiles can be found in the Grumeti River, as well as hippos, giraffes, antelopes, and gazelles. Dinner and overnight will be at Seronera Campsite.

You will eat a full breakfast at 7:00 a.m. Then, you can grab your packed picnic lunch boxes and drive to the Serengeti visitors center to hear the lecture about the Serengeti ecosystem and lots of information about the whole of the park such as where the name comes from and its origins.

After two hours of the Serengeti history, you will continue driving to the exit of the Serengeti ready to register for Ngorongoro Conservation Area, where also you will visit the Oldupai Gorge, a historical site dating back 3.6 million years ago. You will also get a lecture from the guides and spend some time visiting the museum. Afterward, you will drive to Simba A campsite for dinner and overnight on full board.

After breakfast, descend in the Ngorongoro Crater. There is a very high possibility of spotting the Big FIve in one day (lion, rhino, elephant, buffalo, and leopard). Lunch will take place at the picnic site on the crater floor. In the afternoon, drive to Lake Manyara for dinner and overnight at Fig tree lodge and Camp.

Starting from the market, where you visit a Chagga family producing banana beer, you walk northwards passing many different farms. On your way, you get an extensive explanation of the various fruits and vegetables growing in the area. Mzee Filipo, a farmer from Kigoma, will show you his oil press and tell you about the history of irrigation in the area.

Your trip ends at a farm built by the Belgium Development Organisation ACT, where you can visit their sunflower seeds production and make marvelous pictures of colorful flower fields with the Rift Valley as background.

To ensure quality service and safety, first-rate equipment has been selected starting from safari vehicles to camping equipment. The vehicles are serviced on time and check-ups are done after every trip to make sure the next trip is also safe. This is important as safari roads are bumpy throughout the year. However, given the nature of safari roads, sometimes breakdowns may happen or even punctures. In that case if a solution is possible, it will be fixed, otherwise, the office staff is always in touch and a second vehicle will be sent immediately to proceed with the program.

Stretching for 50 kilometers along the base of the rusty-gold 600-meter high Rift Valley escarpment, Lake Manyara is a scenic gem, with a setting extolled by Ernest Hemingway as “the loveliest I had seen in Africa”. The compact game-viewing circuit through Manyara offers a virtual microcosm of the Tanzanian safari experience.

Contrasting with the intimacy of the forest is the grassy floodplain and its expansive views eastward, across the alkaline lake, to the jagged blue volcanic peaks that rise from the endless Maasai Steppes. Large buffalo, wildebeest, and zebra herds congregate on these grassy plains, as do giraffes - some so dark in coloration that they appear to be black from a distance.

Inland of the floodplain, a narrow belt of acacia woodland is the favored haunt of Manyara’s legendary tree-climbing lions and impressively tusked elephants. Squadrons of banded mongoose dart between the acacias, while the diminutive Kirk’s dik-dik forages in their shade. Pairs of klipspringer are often seen silhouetted on the rocks above a field of searing hot springs that steams and bubbles.

Tanzania's oldest and most popular national park, also a world heritage site and recently proclaimed a 7th worldwide wonder, the Serengeti is famed for its annual migration, when some six million hooves pound the open plains, as more than 200,000 zebras and 300,000 Thomson's gazelles join the wildebeest’s trek for fresh grazing.

Yet even when the migration is quiet, the Serengeti offers arguably the most scintillating game-viewing in Africa: great herds of buffalo, smaller groups of elephant and giraffe, and thousands upon thousands of eland, topi, kongoni, impala, and Grant’s gazelle.

The spectacle of predator versus prey dominates Tanzania’s greatest park. Golden-maned lion prides feast on the abundance of plain grazers. Solitary leopards haunt the acacia trees lining the Seronera River, while a high density of cheetahs prowls the southeastern plains. Almost uniquely, all three African jackal species occur here, alongside the spotted hyena and a host of more elusive small predators, ranging from the insectivorous aardwolf to the beautiful serval cat.

But there is more to Serengeti than large mammals. Gaudy agama lizards and rock hyraxes scuffle around the surfaces of the park’s isolated granite koppies. A full 100 varieties of dung beetle have been recorded, as have 500-plus bird species, ranging from the outsized ostrich and bizarre secretary bird of the open grassland to the black eagles that soar effortlessly above the Lobo Hills.

Popular the Serengeti might be, but it remains so vast that you may be the only human audience when a pride of lions masterminds a siege, focussed unswervingly on its next meal.

It has been reported in 2009 that the government authority has proposed a reduction of the population of the conservation area from 65,000 to 25,000. There are plans being considered for 14 more luxury tourist hotels, so people can access "the unparalleled beauty of one of the world's most unchanged wildlife sanctuaries".

The main feature of the Ngorongoro Conservation Authority is the Ngorongoro Crater, the world's largest inactive, intact, and unfilled volcanic caldera. The crater, which formed when a large volcano exploded and collapsed on itself two to three million years ago, is 610 meters (2,000 feet) deep and its floor covers 260 square kilometers (100 square miles).

The crater highlands on the side facing the easterly trade winds receives 800 to 1,200 millimeters (31 to 47 inches) of rain a year and are covered largely in montane forest. The less-steep west wall receives only 400 to 600 millimeters (16 to 24 inches) and is grassland and bushland dotted with Euphorbia bussei (es) trees. The crater floor is mostly open grassland with two small wooded areas dominated by Acacia xanthophloea.

You will be served three meals a day: breakfast, lunch, and dinner. Mineral water will also be provided.

To avoid health problems, use only bottled or filtered water for drinking and brushing your teeth. Bottled water is cheap and readily available in Tanzania, and all lodges and restaurants will have it available. Ilmaasai Expedition’s safari vehicles always come stocked with plenty of bottled water to ensure you remain hydrated while on safari.

Please book your flight to arrive at Kilimanjaro International Airport (JRO). Transfer from and to the airport is included. Ilmaasai Expedition will pick you up from the airport.