7 Days Jungle Wildlife Tour in Bardiya National Park, Nepal
This listing has no upcoming availability. Check out these similar experiences 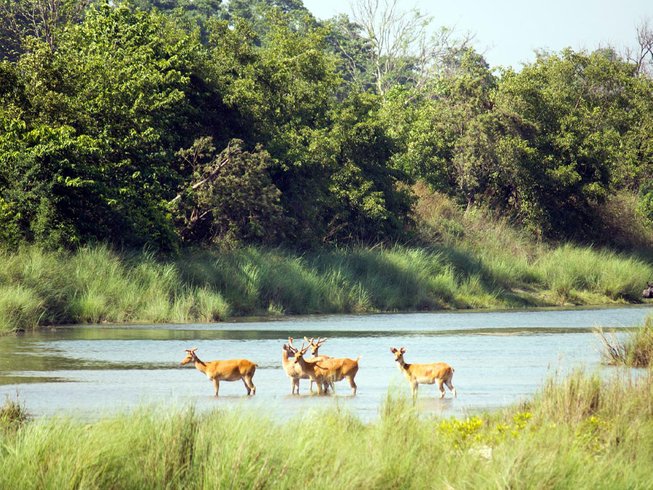 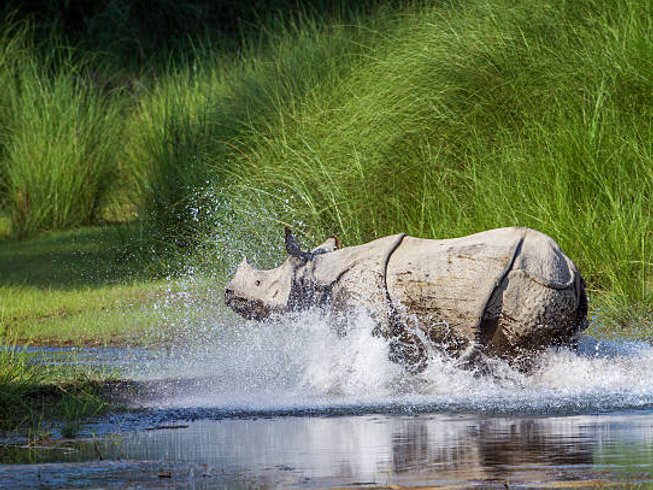 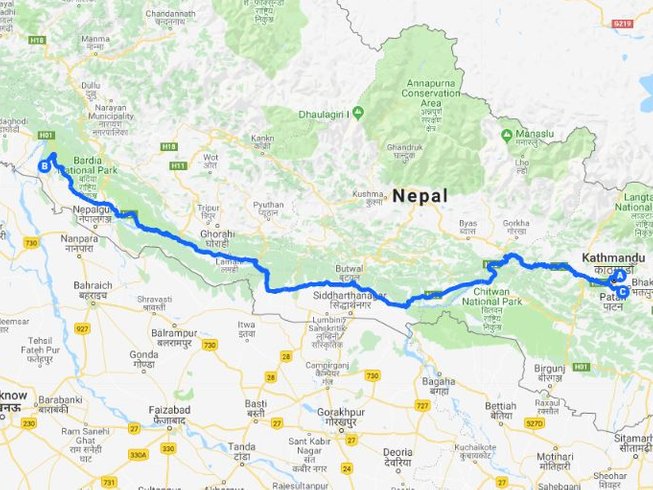 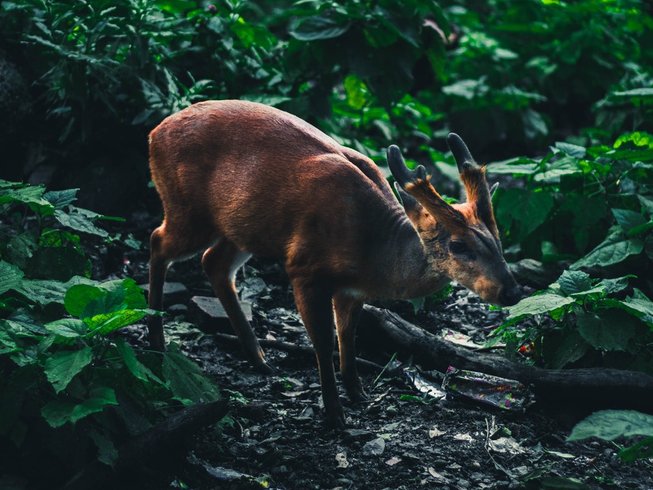 Login to save to your favorites
“Immerse in the breathtaking nature of Bardiya!”
​
Photo
all media

Join Himalayan Scenery Treks and Expedition on a wildlife tour in the largest and most unspoiled wilderness area in the Terai, Bardiya National Park! Spend time away from your daily hassle and take this opportunity to immerse in nature and take in all it has to offer! With a chance to view the wildlife of Bardiya National Park in their natural habitat, your wildlife tour in Nepal will be an experience of a lifetime. Not only that, with a team of an experienced and dedicated travel professional, Himalayan Scenery Treks and Expedition will ensure that this holiday is most amazing and memorable.

As per your flight plan, Himalayan Scenery Treks and Expedition will be at the Tribhuvan International Airport (KTM), Kathmandu to stretch out a warm welcome to you in the wonderful nation for the lovely outing. As you fly towards the International Terminal of Tribhuvan International Airport (KTM) on a clear sunny day, you can see the breathtaking views of snow-capped mountain peaks spread in distance. Once you land, a representative from Himalayan Scenery Treks and Expedition will escort you to your hotel. The day is a complete leisure. You can either choose rest at your hotel room and remove jet lag or take a short walk around in the ancient valley of Kathmandu.

After waking up early, you will have your breakfast in the hotel. Then you will pack your stuff, such as selfie sticks, camera, and extra money. The extra money will be helpful to buy something new for yourself and to experience something new. You will then drive to Bardiya National Park where you will be taking a tour of the jungle (jungle safari). Here you will be able to notice barking deer, deer, bear, blue cow, rhinos, and Bengal tiger.

Today, you will be walking to Karnali river, which is famous for freshwater dolphins. This is the only river in Nepal where you can see dolphins. After reaching here, you will watch dolphin for some time and then you will start another activity for the day i.e. elephant safari.

Day 6: Birdwatching and driving back to Kathmandu

The whopping 900 species (10% of the world's total bird's species, more than Europe and North America combined) makes Nepal a paradise for birding. Today you will take a short tour and, in the meantime, you will go for bird watching. The concentration of birds is high despite the small territory because there are different kinds of dwelling places for birds here such as wetlands, lakes, tropical, and subtropical forests, coniferous and Himalayan valleys. You will be able to see different species of rare and common birds. While all those birds fly in the sky it looks colorful and delightful. After watching migrated birds, you will return to your hotel and then drive back to Kathmandu.

Day 7: Departure to your own destination

Bardiya National Park, situated in the mid-far western region, is the largest and most unspoiled wilderness area in the Terai, covering an area of 968 square kilometers. The park, a sub-tropical jungle, is thickly forested by Sal trees and carpeted with grass, savannah, and riverine vegetation. The north is bordered by the Churia hill range, the west by the Karnali river, while the Babai river cuts its course almost through the middle of the park. On the southern fringe of the park are the villages of the unique and indigenous Tharu people of Western Nepal. Considered as one of the most picturesque national parks in Asia, it teems with rich and diverse flora and fauna.

The park is home to more than 30 different mammals, including the langur and rhesus monkeys, civets, hyenas, wild dogs, sloth bears, otters, blue bulls, deer and wild boars. It is a regenerated habitat for endangered animals like the tiger, rhinoceros, wild elephant (the park harbors the biggest wild tusker in Asia) and black buck, Gharial and marsh mugger crocodiles the great game fish-masher and the Gangetic dolphin cavort in the river waters. The unique birds which number over 350 species include cormorants, egret, storks, geese, jungle fowls, kingfishers and endangered species such as the Bengal florican, silver-eared mesia, and the saurus crane thus making the park truly a bird watchers paradise. Within the park are several open grasslands (plants) where game viewing is excellent. Many of the forest tracks throughout the park also offer excellent game viewing. And when you can take in the sights and sounds of the wild without necessarily having to give up on your creature comforts, what more could you ask for?

Nepal at a glance

Nepal is blessed with rich natural attributes and sophisticated cultural history. More than anything else it is the birthplace of Buddha (light of Asia) who led the world towards peace and serenity and the land of Mt. Everest (Sagarmatha), the top of the world. It is a sovereign, independent Himalayan kingdom with India in the east, west south and with the Tibetan autonomous region of the People's Republic of China in the north.

Nepal is the land of remote mountain villages where people survive by growing their own food on the thousands of hill terraces that scale even the steepest slopes. It is well known as a mystical land of unparalleled verities with the altitude of 70 meters above the sea level in the south and 8,848 meters height of in the north. This vast diversity in altitude is reflected in Nepal's unique culture.

Mount Everest, the highest peak in the world is not only touristic attraction but also very famous for natural beauty particularly the soaring peaks of the Himalayas, terraced farmland, hilly foot trails and the forested plains full of rare wild animals including the lordly tiger and one horn rhinoceros.

The religious homogeneity is the next unique feature of Nepal. The flourishing of art and architecture of Nepal reflect the artistic ingenuity and the religious tradition of people as well. The crystal clear lakes, turbulent rivers with deep gorge and hot springs can be well thoughts out as the major astonishing point of Nepal and plants like orchids and laden rhododendrons are as charming as you can visualize. Verities of ethnic groups have their own dramatic culture, languages, and dialects but most of them can communicate in Nepali. The past splendor and glory of this land can be seen in the architectural expression still to be found in the ancient cities of Kathmandu, Patan &Bhaktapur.

Nepal offers the visitor so many different environments to explore even in a short time. Nepal is the only country to have 7 (UNESCO) world heritage sites. it is a majestic country which can please all types of touristic along with their individual carvings for thrilling mountain expeditions, trekking, jungle safari with world’s largest variety of birds, highly turbulent revenire adventures like rafting and kayaking, Bungy jump, panoramic flight scene, and hot air ballooning. Trekking opportunities are there throughout the year. However, the most popular season is February to May and September to December. Nepal offers, something for everyone. It offers numerous treks: Short to long, easy and more challenging awaits. The dream of Everest trek awaits. Nepal has been called “A trekkers paradise” with the most spectacular trekking routes in the world.

Nepal has a different eating habit from European to the other various countries. Especially, Nepalese cuisine comprises a variety of cuisines based on ethnicity, soil, and climate relating to Nepal’s cultural diversity and geography. Meals are traditionally eaten seated or squatting on the floor and eat with right hand from a plate.

Much of the cuisine is a variation on Asian themes. Other foods have hybrid Tibetan, Indian, and Thai origins. Nevertheless, dal-bhat-tarkari (Nepali: दाल भात तरकारी) is eaten throughout the country. Dal is a soup made of lentils and spices. This is served over boiled grain, bhat—usually rice with vegetable stew, tarkari. Condiments are usually small amounts of extremely spicy chutney (चटनी) or pickle (achaar, अचार) which can be fresh or fermented. The variety of these is staggering, said to number in the thousands. Other accompaniments may be sliced lemon (kagati”) with fresh green chili (hariyo khursani). Dhindo is a traditional food of Nepal. Much of the cuisine is similar to middle eastern cuisine. It also has a high influence of south and central Asian cuisine.