3 Day Adventurous Safari in Kataragama, Uva Province
This listing has no upcoming availability. Check out these similar experiences 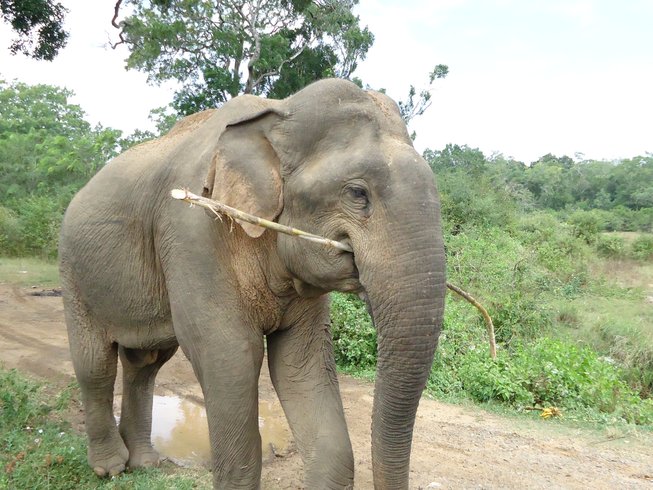 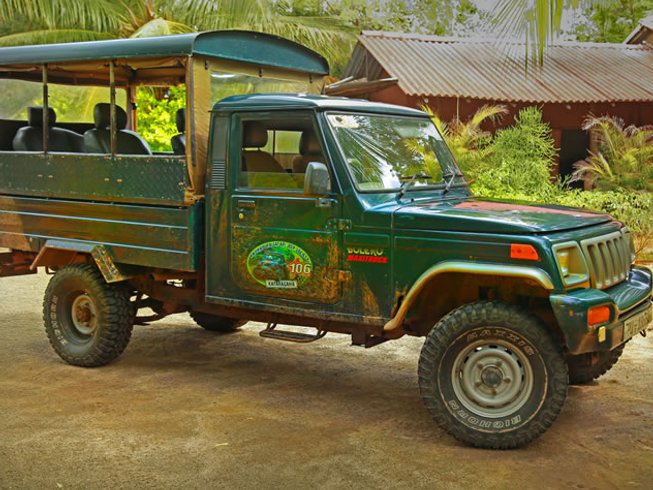 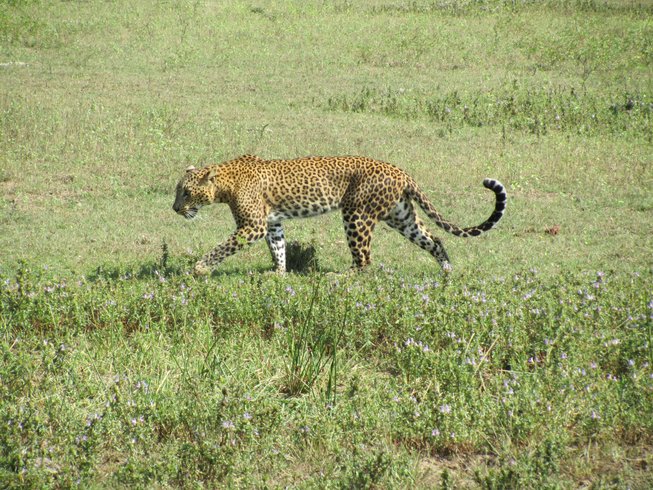 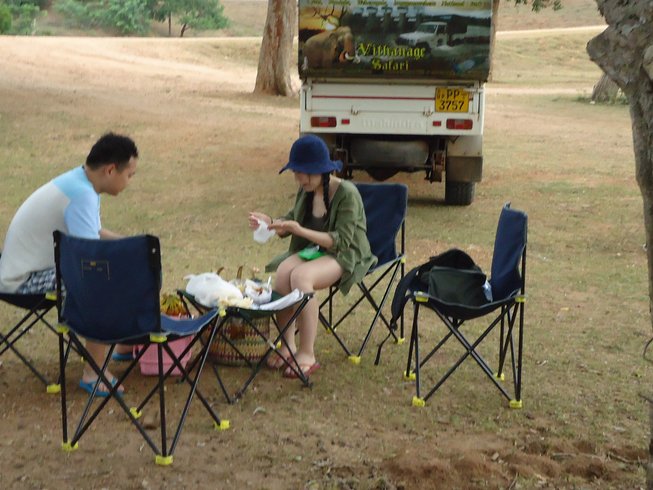 For centuries, the incredible destination that is Yala has been revered as an unparalleled testament to the beauty of the wild in its purest and rawest form. Arguably the best place in the world to spot leopards, sloth bears, elephants, and a whole host of birdlife, Yala promises unforgettable discoveries and exciting adventures. Akin to a phoenix rising from the ashes, Heina brings a truly one-with-nature concept to a more refined and elegant form with Heina Nature Resort. Set within the immediate outskirts of the Yala National Park, this beacon of the south boasts a tremendous commitment to sustainability and the environment. Enjoy a wildlife safari experience complemented with the finest in luxury and comfort in a rustic style!

Heina Nature Resort which has two exclusively designed chalets with all modern luxury amenities in a rustic style adjoining Goyagala Lake gives the illusion of being cut off from the civilization due to its unique location. The natural beauty of the surrounds will help you to sooth your tired mind and relax in a typical village environment, away from the hustle bustle of the city. Here, the dawn is greeted by chirping melody of birds and nights lit by garden lanterns, all adding to the delightful experience amidst a perfect village setting.

Two exclusively designed chalets which can comfortably accommodate 16 adults (eight adults per each chalet). Each is having family rooms with four queen beds in each. Chalets are constructed with all modern luxury amenities in a rustic style to make your holiday a memorable lifetime experience. They feature living and dining zones. Genuine Sri Lankan meals can be relished at the on-site restaurant.

You will be picked up from your hotel in the morning and drive to Yala Kataragama. You will have lunch on the way and arrive Heina Nature Resort in the evening. You can have nature walk around Goyagala Lake, relax, and enjoy drinks and dinner under garden lanterns amid a perfect village setting.

You will rise early and enjoy a cup of Srilankan tea or coffee. Before the sun rises, you will enter Yala National Park for a full day game drive. You can enjoy a picnic breakfast near the beach and lunch near the gem river inside the park. Then, you will leave the park at the set and at Heina Nature Resort, you may relax and enjoy drinks and dinner under garden lanterns, all adding to the delightful experience amid a perfect village setting.

Day 3: Morning game drive at Yala National Park - Drop to the next destination

If you are energetic, you will have one more morning game drive and return to Heina Nature Resort for lunch. After lunch, you will check out and be dropped off at your next destination.

Yala National Park is the most visited and second largest national park in Sri Lanka bordering the Indian Ocean. The park is best known for its variety of wild animals. It is important for the conservation of Sri Lankan elephants, Sri Lankan leopards, and aquatic birds. Yala National Park harbors 215 bird species including six endemic species of Sri Lanka. The number of mammals that have been recorded from the park is 44 and it has one of the highest leopard densities in the world.

Heina Nature Resort is located just outside the Yala National Park and is an eco-home surrounded by beautiful lakes, rivers, the jungle, and archeological sites nested in a two-acre land at Yala Kataragama which is a small village located in the finest edge of the lower southern corner of the island. Yala Kataragama is one of the most visited, sacred pilgrimage sites for Buddhists, Hindus, Muslims, and Veddah communities of Sri Lanka and also the closest point of entry to the main entrance of Yala National Park. The resort is about 300 kilometers from Colombo, 38 kilometers from the Mattala Rajapaksa International Airport (MRIA), 10 minutes walk to historic Kataragama Temple, and only 15 minutes' drive from Yala National Park's main entrance (Yala Block 1, Yala Block 3, and Yala Block 5).

Including Sri Lankan elephant, 44 species of mammals are resident in Yala National Park and it has one of the highest leopard densities in the world. The sloth bears, leopards, elephants, and wild water buffalos are all threatened species that Yala is harboring. Although water buffaloes are indigenous to Sri Lanka, most populations contain genes of the domestic stock or have descended from feral populations. Toque macaque, golden palm civet, red slender loris, and fishing cat are among the other mammals that can be seen in Yala. The elephant population of the park varies seasonally.

Yala is one of the 70 Important Bird Areas (IBAs) in Sri Lanka. Of 215 bird species of the park, seven are endemic to Sri Lanka. They are Sri Lanka grey hornbill, Sri Lanka Junglefowl, Sri Lanka wood pigeon, Crimson-fronted Barbet, black-capped bulbul, blue-tailed bee-eater and brown-capped babbler. The number of water birds inhabiting wetlands of Yala is 90 and half of them are migrant waterfowl (lesser whistling duck, garganey), cormorants (little cormorant, Indian cormorant), large waterbirds (grey heron, black-headed ibis, Eurasian spoonbill, Asian Openbill, painted stork), medium-sized waders Tringa spp., and small waders Charadrius spp. are among the most common water birds. Black-necked stork and lesser adjutant are many of the rare birds that can be seen in the park. The migrant great white pelican and resident spot-billed pelican are also have been recorded.

The reptile fauna recorded from the park is 47 and six of them are endemic. Sri Lankan krait, Boulenger's keelback, Sri Lankan flying snake, painted-lip lizard, Wiegmann's agama, and Bahir's fan-throated lizard are the endemic species. The coastal line of the park is visited by the all five globally endangered sea turtles (leatherback turtle, olive ridley, loggerhead sea turtle, hawksbill turtle, and green turtle) that visit Sri Lanka. The two breeding crocodile species of Sri Lanka which are mugger crocodile and saltwater crocodile inhabit the park. The Indian cobraand Russell's viper are among the other reptiles.

You will be served breakfast, lunch, dinner, and snacks. You will also get Srilankan brewery (beer, wine, and spirits), welcome drink, tea, coffee, fruit basket, and snacks. Please be sure to communicate special dietary requirement, if any, including vegetarian. The resort’s main restaurant caters to the tastes of guests of various countries such as Europe, Indian, Far East, and Sri Lanka with an assortment of different menus with organic rice, seasonal vegetables, and fruits. In addition to conventional menus, arrangements can be made to cater to specific guest requests depending on the situation. The area adjoining the restaurant lit by garden lanterns during the night can be utilized for barbecue. There are two dining units in Heina Nature Resort which as The Dining Room (Sri Lankan and globally inspired cuisine) and The Thambapanni (Asian fusion dining (à la carte)).

Heina Nature Resort provides the airport pickup either from those two airports. For more information, please send an inquiry.