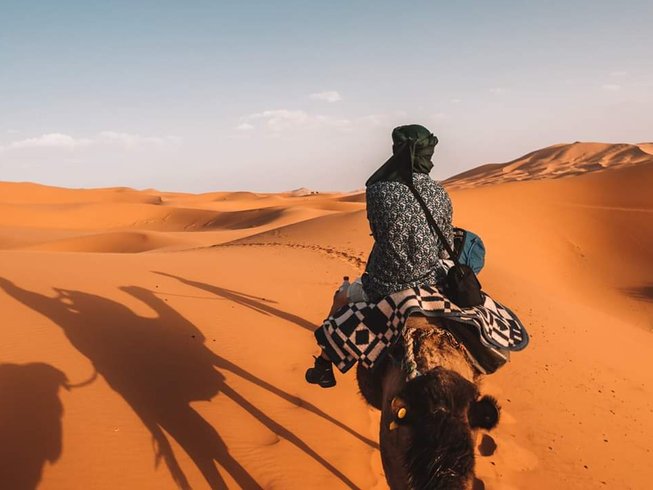 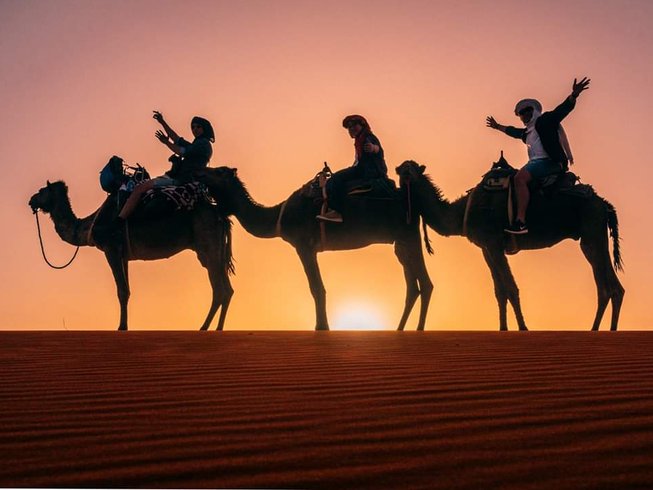 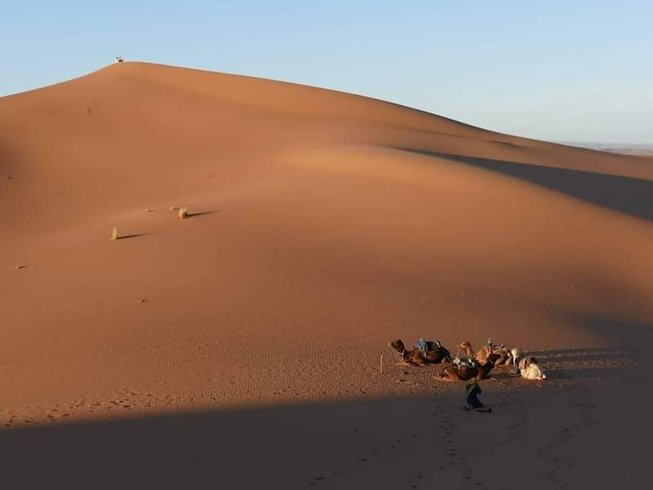 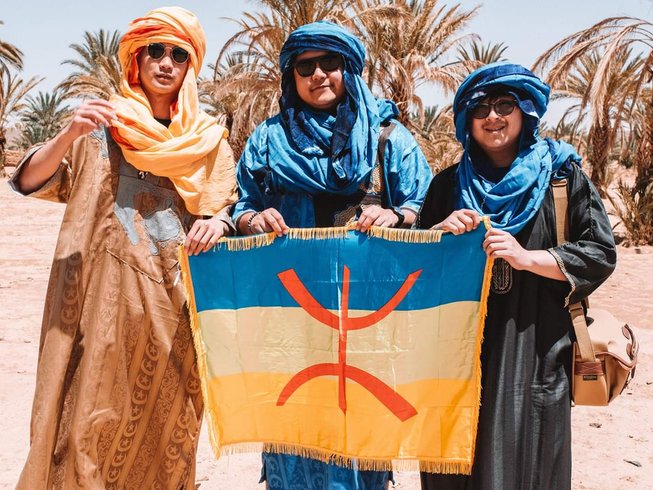 SIghtseeing and Desert Safari in Morocco

Discover the Berber traditional life and the magical dunes of the Sahara Desert in this desert safari from Fez to Marrakech via Merzouga Sahara Desert. Gboo Morocco Tours invites you to discover the magic of the Kingdom of Morocco, a kingdom of wonders that has so much to offer you. It's truly a kingdom that rewards the curiosity.

During this tour, you will be provided with luxury accommodation in the following riads and camps:

Pick up from your hotel in Fez very early in the morning and departure for the south of Morocco. You will have a stop in Ifrane, known as the Switzerland of Morocco, to enjoy its beauty and to have some memorable photos. After that, you will head toward Azrou to see the monkeys in the cedar forest. Continue to Midelt for a lunch meal in a restaurant.

In the afternoon, you will cross the pass of Tizi N Talghamt to reach Errachidia while admiring the views of Ziz gorges. Later you will have a stop for a panoramic view of Ziz Valley. The drive continues to Erg Chebbi Dunes, passing by Aoufous and Erfoud (the last is famous with fossils and dates) where you may want to visit a local fossil craft workshop.

After that you will continue to the captivating dunes of Erg Chebbi, these dunes are called also Merzouga Dunes. Arrive at the hotel where you will spend the night. Dinner in the hotel.

This morning after breakfast in the hotel, you will have a tour of the dunes on 4x4, allowing you to visit the black volcanic rocks of fossils, visit a nomad family living in a tent, visit Khamlia village, and entertainment of their spiritual music of Gnawa.

Visit the lake Dayte Sarji that forms in springtime which attracts pink flamingos and wildlife. Then you will have a break for lunch in Merzouga or Hassi Labied. After lunch, you will see the canal irrigation system and have a walk on the oasis located on the foot of the dunes.

In the afternoon, get ready for a camel trek for an hour and a half to enjoy the sunset. While on the back of your dromedary, you will continue to the camp for an overnight in a traditional nomad tent. Dinner and spend the night in a bivouac in the middle of the dunes.

Wake up early in the morning to enjoy the sunrise on the top of the dune in the Sahara Desert and then have your breakfast. After these beautiful moments, you will ride your camel back to Merzouga. Depart towards Tineghir, passing by Erfoud and Tinejdad, then have a break for lunch.

In the afternoon, you will continue to Todra gorges via Tineghir, stopping along the way for photos and admiring the views. Arrival to Todra Gorges and enjoy its marvelous Canyons views while hiking on foot. Later, you will drive to Boumalne du Dades and stop for a panoramic view of Dades valley. Dinner and overnight at the hotel.

This morning after breakfast in the hotel, you will depart to Marrakech. The next site to visit is the Rose Valley going through the big Skoura palm grove, a beautiful place to contemplate more than 700.000 palms and numerous kasbahs that are built in the surrounding area.

In this Valley damascenes, roses are raised for cosmetic use such as the valued rosewater. The Rose Festival is held here annually in May, it is an important museum for Moroccan culture.

Next stop is in Ouarzazate, also known as “the gate of the desert” that in the Berber language means “noiseless or without confusion”. Here you´ll see the Taourirt Kasbah, one of the most spectacular ksars in Morocco. Stop for a panoramic view of the kasbah of Taourirt then another photo stop near the Atlas film studios.

After that, you will continue to the ksar (fortified village) of Aït Ben Haddou where you will visit the famous Kasbah (declared World Heritage Site by UNESCO in 1986). Famous films have been shot in this spectacular stage, including Gladiator, Obelix, The Mummy, The Jewel of the Nile, and Sahara with Penélope Cruz.

Free time for lunch in town. In the afternoon, you will drive to Marrakech over the mountains of high Atlas, passing through the Tizi N’tichka pass (2260 meters in altitude). Drop off in Marrakech in your hotel / riad. This marks the end of Gboo Morocco Tours' services.

Spend four days to explore the Sahara Desert of Morocco starting in Fez and ending in Marrakech. On the way, you will discover the middle Atlas which is a Moroccan mountain range oriented south-west / northeast. This chain belongs to the Atlas Mountains and more precisely, to one of the three elements of the Moroccan Atlas, the other two being the Middle Atlas and the Anti-Atlas.

You will also visit Kasbah Ait Ben Hadou, a group of earthen buildings surrounded by high walls, which is a traditional pre-Saharan habitat. The houses crowd together within the defensive walls, which are reinforced by corner towers. Ait-Ben-Haddou, in Ouarzazate province, is a striking example of the architecture of southern Morocco.

Merzouga is a small Moroccan town located in the Sahara desert, near the Algerian border. Merzouga opens on Erg Chebbi, an immense expanse of sand dunes north of the city. To the west is Dayet Srji, a seasonal salt lake, often dry in summer. When it fills again, it attracts a wide variety of migratory birds and desert, including warblers, nightjars and, sometimes, flamingoes.

The Dades Gorges are gorges located in the upper Dades valley between the localities of Boumalne Dadès and M'semrir and a popular tourist destination. The gorges are originally formed by sedimentary rocks deposited in the marine environment over a long period, from Jurassic to Eocene. Then these rocks were exposed during the Oligocene alpine orogeny.

Dades was formed during the uprising; it has thus sunk by way of antecedence in the rocks which were pushed upwards, digging gorges in the marls, sandstones, or limestones.

During this tour, your daily breakfast and dinner are included in the price. You will be served with traditional Moroccan food. Coffee and tea are also included.

Transfer available for additional US$182 per person