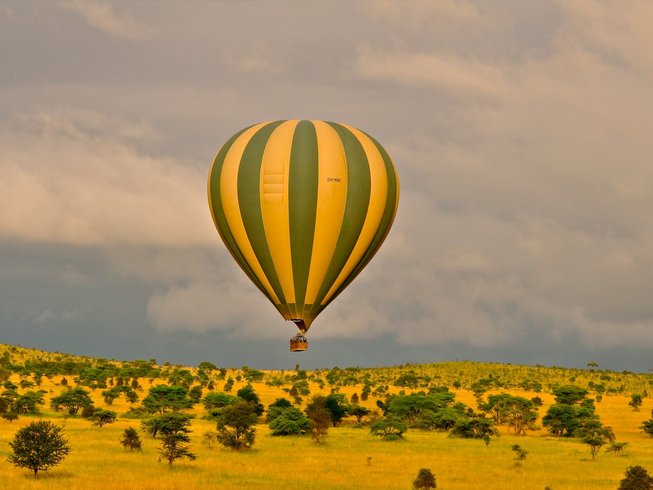 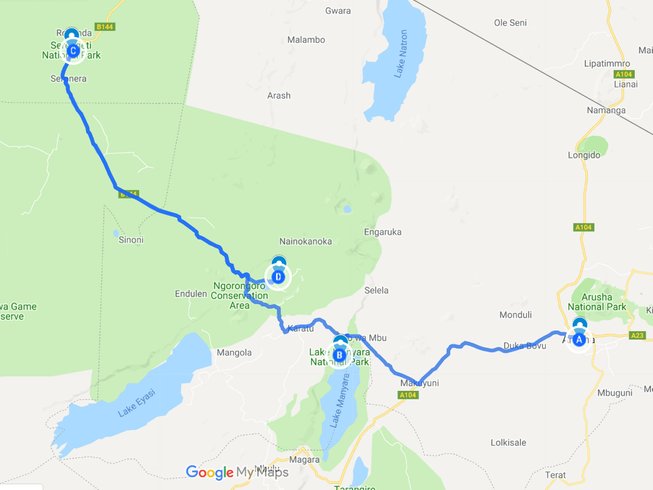 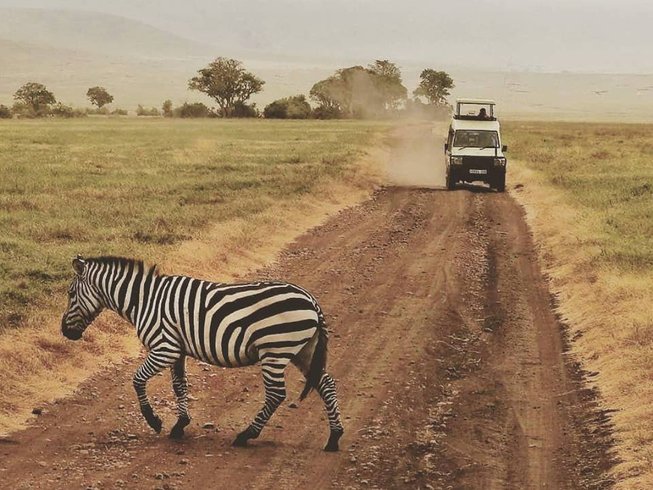 Login to save to your favorites
“Balloon safari”
​
Photo
all media

Go on a special journey in Tanzania for exploration of new places. See interesting things and get to know its people in this safari tour. This safari tour will take you from Arusha to Tarangire, Lake Manyara National Park, Serengeti National Park, and Ngorongoro Crater. See the Big Five and other wildlife and have a trip of a lifetime with Gamily Tours.

During this safari, you will be staying in lodges near the national parks.

This new property located on 15 acres of coffee farm sailing like an ark along with the primeval of the Ngorongoro Crater conservation area which is a world heritage site in the volcanic high land of Tanzania.

It has superb 10 cottages and 3 family Bungalows all with fireplace in each room and consists of bathroom, bedroom, verandah offers clear forest air and superb forest viewing over the farmland.

a private safari camp perfectly located at heart of Central Serengeti with a perfect view of Hembe Hills overlooking endless plains of Serengeti. Its unique location provides a diversity of resident wildlife and million migrations of animals that pass through these plains year after year.

Tukaone Serengeti Camp has been designed to blend into its surroundings and minimize our visual and environmental impact while offering needed to our clients. All our tents are custom made using heavy-duty canvas ensure a spacious room complete with en suite bathrooms.

The safari starts after breakfast at the hotel then drive to Tarangire National Park for a game drive. Lunch is inside the park. Dinner and overnight take place at Hhando Coffee lodge.

The Tarangire National Park is located between the meadows of Masai Steppe to the southeast and the lakes of the Great Rift Valley to the north and west. Among the rolling area where the park lies, it occupies an area of 2,600 square kilometers. The perennial Tarangire River takes over the northern part of Tarangire. Through the cut ditches, the River flows upwards up to when it leaves the corner of the park, in the North West flowing into Lake Burungi. There are a number of wide swamps that dry into green plains during the dry season in the south. You will obviously see big numbers of elephants gather here as well as the wildebeests and zebras the impalas also exist in large numbers as well, eland, buffalo, and giraffes. Bohor reedbuck, Thompson’s gazelle, greater and lesser kudu, and the Coke’s hartebeest. On really some rare occasions, the common usual gerenuk and fringe-eared Oryx are also seen

After Breakfast you set off to Serengeti national park (with your picnic lunch box) 3 – 4 hours’ drive, half day spent exploring this photogenic park afternoon game drives are offered. Dinner and overnight stay at Tukaone Tented Campsite.

Early in the morning around 0500am you will be picked up for flying with a balloon from the center of Serengeti {seronera} you will have Bush breakfast at 0830am followed with a full game drive at the famous and best national park over Africa – Serengeti. Dinner and overnights at Tukaone Tented Lodge.

After breakfast (with your picnic boxes), descend to the Ngorongoro Crater for a full day game drive until evening, we view the game as we drive southeast up into the magnificent Ngorongoro Conservation. Full afternoon crater tour followed by dinner and overnight stay at a Hhando coffee lodge.

The Ngorongoro crater is the world’s biggest whole volcanic caldera at 8300 sq. km and is arguably the most stunning arena. It is frequently described as one of the wonders of the world, not only because of its geological magnificence but also because it serves as an extraordinary natural sanctuary for some of Africa’s largest populations of large mammals. Ngorongoro and other freestanding mountains are volcanic in origin, formed during the fracturing process that created the Rift valley 15 to 20 million years ago. When it peaked in size 3 million years ago it was a similar height to Mt. Kilimanjaro today

After breakfast (with your picnic lunch box), you drive to Lake Manyara National Park for a game drive until evening

Lake Manyara a protected area in Tanzania's Arusha and Manyara Regions, situated between Lake Manyara and the Great Rift Valley. It is administered by the Tanzania National Parks Authority and covers an area of 325 km2 (125 sq. mi) including about 230 km2 (89 sq. mi) lake surface. More than 350 bird species have been observed on the lake.

This is the end of the safari and you will then be driven back to Arusha.

During this safari, your daily breakfast, lunch, and dinner are included in the price plus one bottle of water per day.

Transfer available for additional US$35 per person