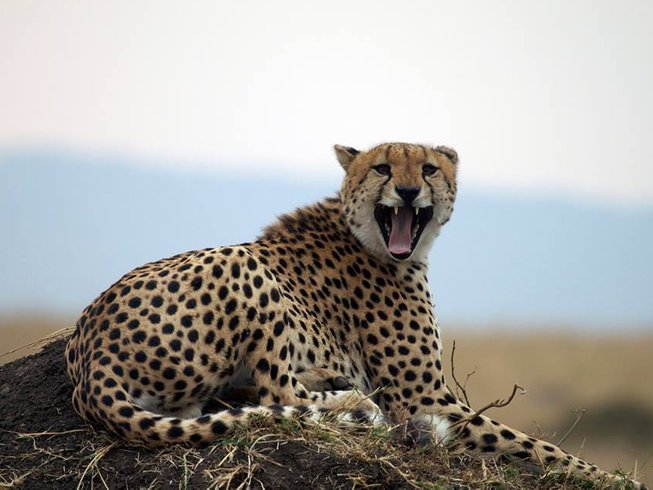 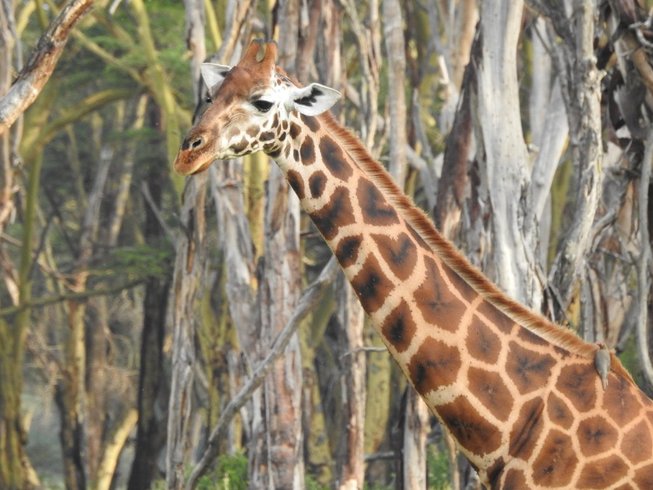 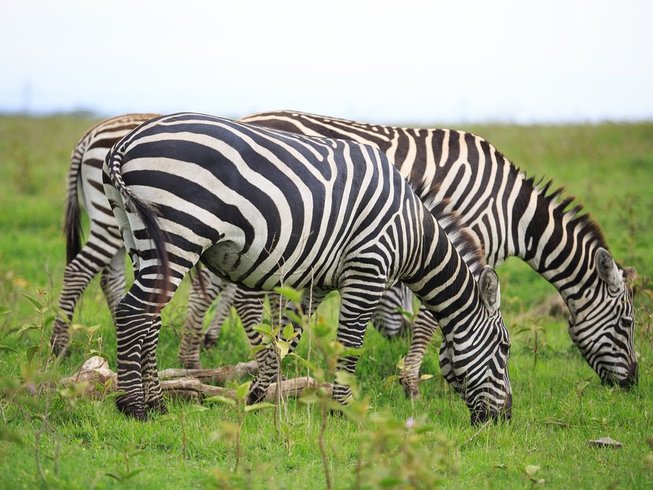 This safari covers the magical Maasai Mara National Reserve and the Great Rift Valley lakes of Naivasha and Nakuru. The itinerary is good for the people looking for an adventurous safari. Maasai Mara is globally famous for its exceptional population of lions, leopards and cheetahs, elephant, rhino (the Big Five) and the annual migration of zebra, Thomson's gazelle, and wildebeest to and from the Serengeti every year from July to October, known as the Great Migration. Lake Nakuru attracts the vast quantity of flamingos that famously line the shore. Other birds also flourish in the area, as do warthogs, baboons and other large mammals. Black and white rhinos have also been introduced. Lake Naivasha offers more than enough from a boat ride, birdwatching, crater lake and Hell’s Gate National Park. Walking is permitted in the park, making it ideal for hiking, biking, and rock climbing.

During your seven-day safari in Maasai Mara, Lake Nakuru, Lake Naivasha and Amboseli, you'll be staying in budget camps in the various destinations. Please note that you can upgrade the camps to luxury lodges at an extra cost depending on your budget. Explorers Wild Adventures can further customize other accommodations of your interest to meet your requirements.

You will be picked up from your hotel in the morning and you will first drive through the viewpoint of the Great Rift Valley to take some pictures of the beautiful landscape. There will be another stopover for lunch in Narok town before you continue your drive to the Masai Mara National Reserve. Arrive at your camp for check-in and later in the afternoon depart for your first game drive in the Maasai Mara.

Discover Maasai Mara National Reserve, immerse yourself in this prime wildlife area and connect with nature on every level. Variety is what distinguishes the exceptional from the mundane and this reserve offers copious amounts of variation. This is the best time of day to view nocturnal hunters who prepare for their nightly expeditions. Watering holes are also usually busy just before sunset as animals such as hippos return to their resting spots while others congregate to drink before retiring for the night. Later in the evening, return to your budget camp for dinner and overnight.

You will have full-day morning and afternoon game drives. You will enjoy a picnic lunch with the hippos and crocodiles at the hippo pool in Mara River.

Start your day with an early morning game drive between 06:30 and 09:00. After your morning game drive, return to the camp for breakfast after which you will depart for Nakuru with an en route lunch. A highlight of the journey is the first glimpse of Mount Suswa and Lake Naivasha. Mount Longonot and Hell’s Gate National Park may be glimpsed to the north. Arrive in Nakuru then check into your budget hotel for dinner and overnight.

You will have a morning game drive in Lake Nakuru National Park after your breakfast. After your game drive, you’ll depart for Lake Naivasha with an en route lunch. Later in the evening, you’ll check into your budget camp for dinner and overnight.

After morning breakfast, you’ll visit Hell’s Gate National Park. “A Walk on the Wild Side”, it’s one of few game parks in Kenya where you can walk, run or cycle alongside giraffes, zebras, gazelles, and wildlife. Spectacular scenery including the towering cliffs, water-gouged gorges, stark rock towers, scrub-clad volcanoes, and belching plumes of geothermal steam make it one of the most atmospheric parks in Africa. After your walk, you’ll depart for Amboseli with an en route lunch. Later in the evening, you’ll check into your budget camp / lodge for dinner and overnight.

You enjoy full-day morning and afternoon game drives with picnic lunches. A particular feature of Amboseli is the possibility to take picture postcard photos of elephants against the backdrop of Kilimanjaro. Later in the evening, return to your budget camp/ lodge for dinner and overnight.

In this morning, enjoy a pre-breakfast game drive between 06:30 and 09:00. After this, return to the camp for a hot breakfast after which you begin your journey back to Nairobi. You'll be dropped at your hotel or transferred to Jomo Kenyatta International Airport (NBO) for your outbound international flight.

Masai Mara National Reserve is the most famous and most visited reserve in Kenya. Covering an area of 1,510 square kilometers, Maasai Mara National Reserve is, in fact, the extension in the Kenyan territory of the vast Serengeti National Park in Tanzania. Together, they constitute a huge ecosystem in which animals move freely. All large African animals are present. Thomson’s and Grant’s gazelles, impala, Kirk’s dik-dik, bushbuck, topi, buffalo, Ellipsen waterbuck, eland, and giraffe, all are there.

Famous for its rich wildlife, the Maasai Mara is home to not only the Big Five (elephant, lion, buffalo, rhino, and leopard) but also many birds (over 500 species of birds have been recorded). Along the rivers, crocodiles and hippos lie in wait. Composed of vast rolling plains and hills, the Masai Mara is dotted with umbrella thorn acacias and thorny thickets. In the Maa language, Mara means spotted and may refer to the colorful landscapes

Lake Nakuru is a soda lake whose waters are often covered by a living carpet of thousands of flamingos and plains that are home to the lion, rhinos, leopards and large herds of waterbuck. Created in 1961 to protect the alkaline lake of the same name, the park offers typical plains vegetation. Located 156 kilometers northwest of Nairobi, Lake Nakuru derives its name from the Masai word enakuro which means a cloud of dust. It is home to many herbivores including Rothschild’s giraffe, buffalo, hippo, gazelle, and nearly 55 mammals including lions, leopards, spotted hyenas, rock hyraxes, and reedbuck.

Lake Nakuru National Park is famous for hosting both white and black rhinoceros, reintroduced after many years’ absences. Further renowned for the dwarf flamingos that congregate in thousands on the shores of the lake, the park also hosts over 400 species of birds including herons, ospreys, and cormorant. Many are migratory birds from the northern hemisphere.

Derived from the Masai name nai’posha, meaning rough water in reference to the sudden storms that may come up over the lake, Lake Naivasha covers nearly 139 square kilometers and is surrounded by a marsh of 64 square kilometers. Spread around the lake are rich green plains supporting zebra, hartebeest, waterbuck, buffalo, impala, giraffes, monkeys and, at night, hippos. There is also an important bird population (over 300 species of birds) including African fish eagle, osprey, jacana and black rail.

Located about 250 kilometers from Nairobi and along the Tanzanian border, the park derives its name from the Masai word empusel, meaning salty, dusty place. Declared a national park in 1974 to protect its unique and fragile ecosystem, Amboseli National Park offers landscapes of remarkable contrasts: arid zones alongside the lush oases of the swamps. This compact park is abundant with wildlife and allows for excellent game viewing.

Its vegetation consists of a combination of sprawling grasslands, swampy springs and dry dusty earth. Amboseli is most famous for its large elephant populations, with the bulls having some of the biggest tusks in the world. From Observation Hill, you will have a view of the entire park and especially the swamp areas where buffalo, elephants, hippos and a diversity of water birds come to cool off and refresh themselves. Look out for the shy porcupine who only dares to emerge at sunset.

The ecosystem of this low rainfall region depends on the water from Mount Kilimanjaro (5,895 meters). Covering an area of 392 square kilometers, the park is, in addition to elephants, home to numerous animals (giraffe, wildebeest, antelope, buffalo, lion, cheetah, leopard, and hyena) as well as 400 species of birds (pelicans, kingfishers, crakes, hamerkop and 47 types of raptor) who live alongside the Masai villages.

Kenya's area covers 581,309 square kilometers. Its population is approximately 43 millions with the capital city in Nairobi. The official language in Kenya is English and it is spoken at all hotels, banks, shops, etc. Kiswahili is the national language.

During this safari vacation, you will enjoy daily delicious breakfast, lunch, and dinner. You will also be provided with one bottle of water every day.

You can also experience how the Maasai people live in the middle of the bush with zebras grazing and lions roaring just outside their homes and get to know their culture and customs on a visit to the traditional Maasai village.