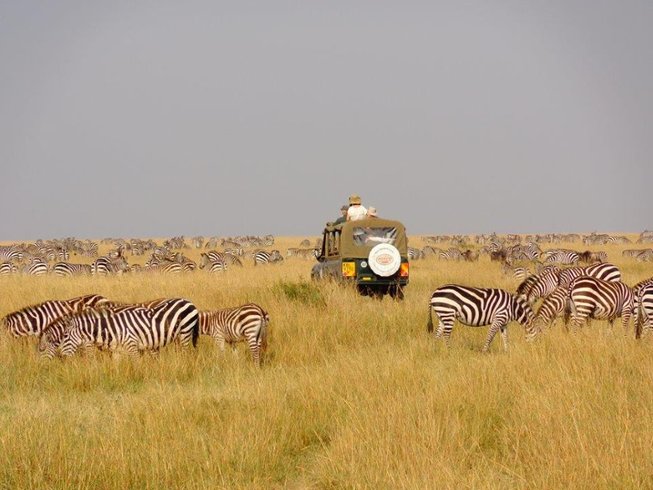 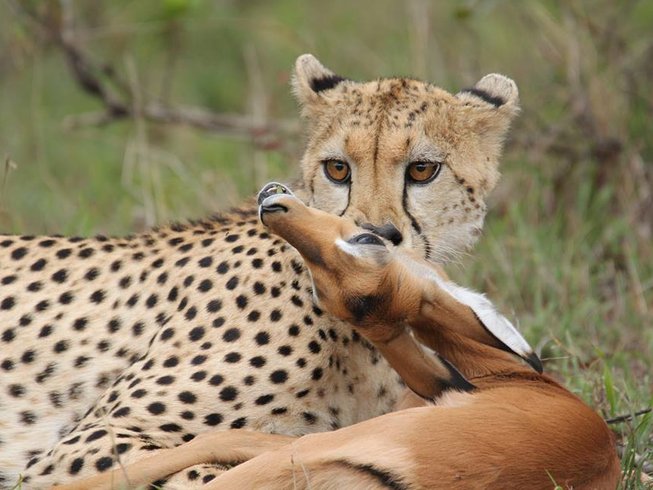 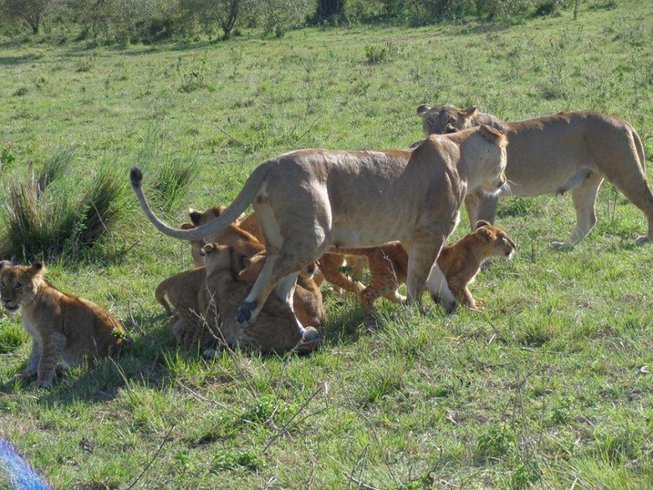 Discover Maasai Mara National Reserve, the most famous and most visited reserve in Kenya where all large African animals are present. In the Maa language, Mara means "spotted" and may refer to the colorful landscapes. Alternatively, the name may refer to the arrival of over two million herbivores during the annual migration (wildebeest, gazelles, and zebras). So, what are you waiting for? Pack your bag and be ready for your amazing journey in Maasai Mara!

You will stay for two nights in a budget tented camp in Maasai Mara. Your camp comprises luxurious en-suite tents, each has a private bathroom and the water is heated by a charcoal boiler. Camp facilities include a restaurant, a bar, and a lounge.

All meals are served in the restaurant, but guests can also choose to enjoy a romantic bush dinner served beneath the starlit African night. The leafy canopy surrounding the camp creates a cool retreat from the heat of the plains and attracts numerous bird life and you can expect lots of bird song throughout the day. The camp is located 250 kilometers from Nairobi by road, and just 45 minutes by air in Maasai Mara.

You will be picked up from your hotel in Nairobi on the agreed time upon confirmation of your tour. Then, you will depart to Maasai Mara National Reserve at 08:00 via the viewpoint of the western Great Rift Valley and Narok Town for lunch. Your journey will deepen into the Maasai plains, arriving at around 14:00 for check in to your tented camp.

The Maasai Mara National Reserve is widely considered to be one of the world’s greatest safari destinations featuring traditional Maasai Village, breathtaking scenery, and an incredible abundance of both resident and migratory wildlife. Your afternoon drive will begin late in the day and conclude just before darkness falls.

This is the best time of the day for nocturnal hunters who prepare for their nightly expeditions. Watering holes are also usually busy just before sunset as animals such as hippos return to their resting spots while others congregate to drink before retiring for the night.

Your day starts with the breakfast at the camp and by 08:00, you'll leave with picnic lunch for a full day game drive. The Maasai Mara landscape is scenic savannah grassland on rolling hills. The reserve is the best park for game viewing in Kenya as it has an extensive road and track network which allows for close range viewing and photography.

Famous for its rich wildlife, the Maasai Mara is home to not only the Big Five (elephant, lion, buffalo, rhino, and leopard) but also many birds (over 500 species of birds have been recorded). A game drive to Mara River which is the point to spot the crocodiles and hippopotamus is always emphasized by the guides.

The mighty river is inhabited by crocodiles lying in wait for the wildebeest to cross during their spectacular annual mass migration from the Serengeti in the South to the Maasai Mara in the North. You will take a break for your picnic lunch after viewing the hippos and crocodile. Your game drive will continue till late in the evening. You will also have the option of visiting a local Maasai Village.

There will be an early morning pre-breakfast game drive and perhaps you will catch a glimpse of the big cats as they hunt and kill very early in the morning. You'll have a great chance to view lions, cheetahs, and leopards at this time of the morning. If you are lucky you will witness a hunt and a kill.

At 09:30, back to the camp for full breakfast. Later, you will depart the Maasai Mara for Nairobi with a stopover at the curio store where you can buy some souvenirs to remind you of a great holiday in the Mara. You will arrive in Nairobi at around 16:00 where you can be dropped off at your hotel or airport for your flight back home.

Together, they constitute a huge ecosystem in which animals move freely. Composed of vast rolling plains and hills, Maasai Mara is dotted with umbrella thorn acacias and thorny thickets. Green in the rainy season, the high-growing grass is dry for the rest of the year, offering one a view of eternal Africa. Immerse yourself in this prime wildlife area and connect with nature on every level.

Kenya is simply the best wildlife viewing destination in Africa. Travelers from all over the world are drawn here by its essence, the chance to immerse yourself in the spectacle of the big game, the predators, and the prey ritually entwined in a cycle of life and death. Kenya straddles the Equator with geography ranging from snow capped Mount Kenya, the second highest mountain in Africa, to lush tropical rainforest and golden sands at sea level.

Kenya is a land of contrasts and extremes, a country with an extraordinary variety of landscapes and locations, all of them striking in their own particular way. It has earned the epithet "the cradle of mankind" for the discovery of archaeological evidence of the earliest origins of mankind. Kenya not only boasts every known landform but also a wealth of animal and bird life which owes its very existence to the contrasts in the country’s terrain.

You do not have to be an ornithologist to enjoy its one thousand species of birds or a zoologist to be amazed by its variety of animals, birds range from the beautiful to the bizarre and the wildlife from the weird to the wonderful. People nowadays are among the last generations to have the opportunity to experience the vanishing cultures of East Africa.

Kenya is the tribal home to 40 different ethnic groups, many still living exactly as their ancestors did thousands of years ago. You can immerse yourself in the ways and culture of some of Africa’s proudest and most striking tribes.

During this safari, you will enjoy daily delicious breakfast, lunch, and dinner. You will also be provided with one bottle of water every day.

There are optional activities for you to participate in during this tour at additional cost. You can fly to the sky with a hot air balloon safari that will see you soar above all of the action. Ask your safari expert about adding a hot air balloon adventure to your safari.

You can also experience how the Maasai people live in the middle of the bush with zebras grazing and lions roaring just outside their homes and get to know their culture and customs on a visit to the traditional Maasai Village at an additional cost of 20 USD per person.