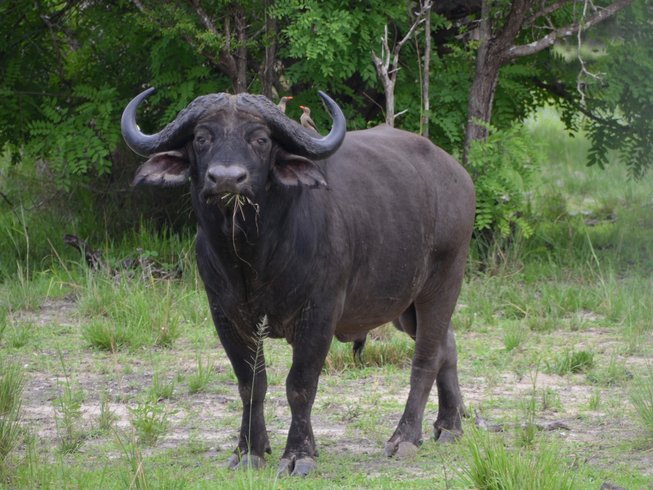 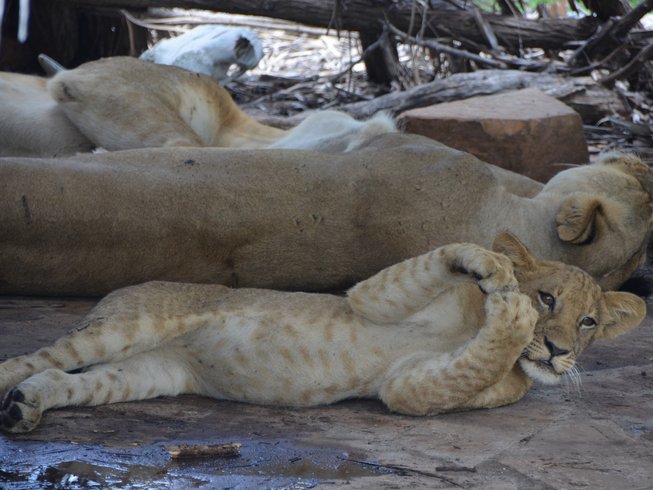 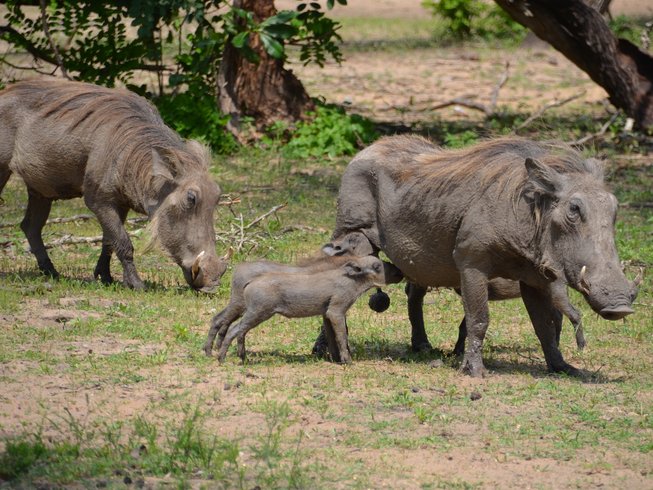 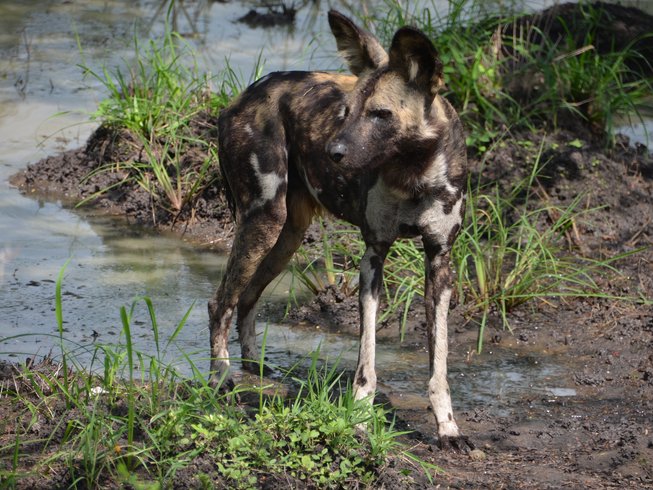 This safari is a combination of three national parks. This safari will take you to Mikumi National Park, Udzungwa Mountain National Park, and Nyerere NP. Mikumi National Park is Tanzania’s seventh largest national park, with almost guaranteed wildlife viewing. Udzungwa Mountain National Park is one of the most remarkable, immaculate, paradisiacal, and unique wilderness mountains, with forests with a greater altitudinal range of forests. The Nyerere NP (Formerly Selous Game Reserve) is the largest National Park in Tanzania. It covers a total area of 30,800-kilometer square feet and is located in southern Tanzania. The Nyerere NP (Selous GR) was designated a World Heritage Site by UNESCO in 1982 because of the diversity of its undisturbed wildlife and nature.

In this safari, you will stay in Mikumi Bastian Camp for the first night and third night, Udzungwa Twiga Hotel on the second night, and Selous Hippo Camp on the fourth and fifth night.

The camp consists of six cottages and a campsite. Each cottage has a private veranda and is decorated with locally made furniture and fabrics to keep an authentic atmosphere in the rooms. All the cottages have a private bathroom attached. The rooms contain everything you will need during your stay such as complimentary bottled water, towels and mosquito netting, hot water, and electricity 24 hours.

Your driver will pick you up at 7 a.m. and drive you to Mikumi National Park. It will take about five hours. You will arrive for a hot lunch in the park. After lunch, you will continue your safari until sunset. Then, you will have dinner and overnight will be at Mikumi Bastian Camp. Lunch and dinner will be included.

After breakfast, head to Mikumi National Park for a half-day safari until lunchtime. You will have lunch in one of the camps inside the park. After lunch, drive to Mount Udzungwa National Park. Then, you will have dinner and overnight will be at Udzungwa Falls Lodge. Breakfast, lunch, and dinner are included.

Wake up for breakfast then go to the park’s headquarters to complete the formalities. Then head to the starting point of a beautiful mountain park and enjoy the natural beauty of the park. You will have a picnic lunch in the bush, then explore the region. You will have access to the magnificent Sanje Waterfall, which extends for 170 meters. There, you will see different species of monkeys including the endemic species of the colobus monkey and beautiful landscapes. You will have the chance to swim in one of the waterfall pools. Do not forget to take your swimsuit and towel. After trekking, you will return to Mikumi Bastian Camp for dinner and overnight.

Breakfast, lunch, and dinner are included.

After breakfast, you will begin your journey to the Selous Game Reserve. This trip is one of the most amazing and untouched areas of Tanzania. The road will take you to the Uluguru Mountains, crossing the rivers and passing through small villages and farms in the area. The driving is the most rewarding and the adventures of the southern circuit. Arrival at the Nyerere NP for afternoon safari. Overnight will be at Selous Wilderness Camp.

Breakfast, lunch, and dinner are included.

A one-day safari in the Nyerere NP by 4x4; this will allow you to have good photographic opportunities and the opportunity to explore different sections of the reserve. Nyerere NP is the largest National Park in Tanzania, covering an area of 30,800 square kilometers. Selous is famous for its elephants. Lions, wild dogs, buffaloes, impalas, elands, baboons, zebras, wildebeest, and greater kudu are usually seen.

You will continue your safari until 4 p.m. Then return to camp for a boat safari along the mighty Great Rufiji River until sunset.

The boat safari puts you in close contact with hippos, crocodiles and fantastic birds. The animals will drink at the river and the boat can approach elephants, antelopes, and others on the banks of the river a few meters. The crocodile slips into the water as you approach your boat and the hippo appears in a frightening, grunting and blowing proximity. Then, you will have dinner and overnight will be at Selous Wilderness Camp. Breakfast, lunch, and dinner are included.

Day 6: Walking Safari in the Wild the drive to Dar es Salaam

Wake up early in the morning and grab a cup of coffee or tea, then go on a nature safari with an armed escort. It will take about two and a half hours. The walking safari will give you a special feeling for African nature. You will have the chance to touch nature, to see the different footprints and the droppings of various wild animals and small creatures that you will not be able to see during the game drive. After walking safari, you will return to the camp for breakfast. After breakfast, you will head to Dar es Salaam.

Lunch will be on the way. Your driver will drop you at your hotel or airport for your next destination.

Breakfast and lunch are included.

End of the safari.

Udzungwa Mountains National Park is the tropical rainforest mountains in Tanzania. Udzungwa Mountain is the part of the Eastern Arc Mountains with a size of 1,990 square kilometers and was established as a national park in 1992. The highest peak of the mountain is 2576 meters above sea level (Rumemo Peak). There are more than 400 bird species, 2500 plant species (25% are endemic) and six primate species have been recorded in this park. It has the second largest biodiversity of a national park in Africa.

Six primate species have been recorded, five of which are endemic. The Iringa red colobus and Sanje crested mangabey are only found in the Udzungwa Mountains National Park. Its plateau contains populations of elephants, buffalos, lions, leopards, antelopes and several forest bird species. Hiking and trekking are a popular tourism activity in the Udzungwa Mountains National Park, as the park has no roads and is accessible only on foot.

The hiking trails range in difficulty, from the short one-hour Sonjo trek to the extremely challenging six-day camping trek the Lumemo Trail. The most common walk is the Sanje waterfalls trail which takes approximately four hours to complete and allows the visitor access to the stunning 170-meter waterfall and includes swimming in the waterfall plunge pools as part of the activity.

Mikumi National Park was established in 1964, covering an area of 1070 square kilometers; it was later extended in 1975 to cover the current area of 3,230 square kilometers. Mikumi National Park is located to the North of the famous Selous Game Reserve. The park is the fifth-largest national park in Tanzania and the most accessible from Dar es Salaam throughout the year. The park shares a common border and ecosystem with Selous Game Reserve to the south, lying astride the main highway to Zambia, and en route to the National Parks of Udzungwa Mountains, Ruaha, and Kitulo.

The landscape of Mikumi is often compared to that of the Serengeti. The road that crosses the park divides it into two areas with partially distinct environments. The area north-west is characterized by the alluvial plain of the river basin Mkata, eventually merging with the Miombo woodland covering the lower hills. The vegetation of this area consists of savannah dotted with acacia, baobab, tamarinds, and some rare palm. In this area, at the furthest from the road, there are spectacular rock formations of the mountains Rubeho and Uluguru.

The southeast part of the park is less rich in wildlife and not very accessible. Mikumi National Park hosts buffaloes, giraffes, elephants, lions, pythons, zebras, Elands, leopards, crocodiles, warthogs, bushbuck, waterbuck, reedbuck, grater kudu, wildebeest, impalas, and other residents. Over 300 species of birds have been observed in this park. The best time to visit Mikumi National Park is during the dry season which is June to February. During the rainy season (March to May), some of the park roads are impassable. However, the park is accessible all year round.

Selous Game Reserve is the largest game reserve in Africa, located in the south of Tanzania. It was named after Englishman Sir Frederick Selous, a famous big game hunter and early conservationist, who died at Behobeho in his territory in 1917 while fighting against the Germans during the First World War. Selous Game Reserve was designated a UNESCO World Heritage Site in 1982 due to the diversity of its wildlife and undisturbed nature. The reserve covers a total area of 54,600 square kilometers and has additional buffer zones.

Its wildlife is spectacular, with some of its mammal and reptile populations are largest in Africa, namely buffaloes, elephants, hippos, wild dogs, and crocodiles. Other wildlife includes the lions, leopards, cheetah, spotted hyena, wildebeest, impala, waterbuck, zebra, eland, the greater kudu, sable antelopes, giraffe, baboon, the vervet monkeys, blue colobus monkeys, and the black and white colobus monkey which can be seen in certain riverine forests moving from tree to tree in family groups.

There is a large population of predators including and about 440 species of birds in the Selous, of both resident and migratory birds. The area was first designated a protected area in 1896 by the German Governor of Tanganyika Hermann von Wissmann, and became a hunting reserve in 1905. A section of the northern part along the Rufiji River has been designated a photographic zone and is a popular tourist destination.

There are several low to high range lodges and camps mainly situated along the river and lake systems in this area. Walking safaris are permitted in the Selous through game inhabited bushes in the company of an armed ranger. Also, boat safari on the Rufiji River is a popular activity. The reserve can be accessed by road from Morogoro or Dar es Salaam, or small aircraft from Dar es Salaam or Zanzibar.

African Pangolin Safaris will pick up and drop off the clients from their hotel, ferry port from Zanzibar, or airport without extra charge.