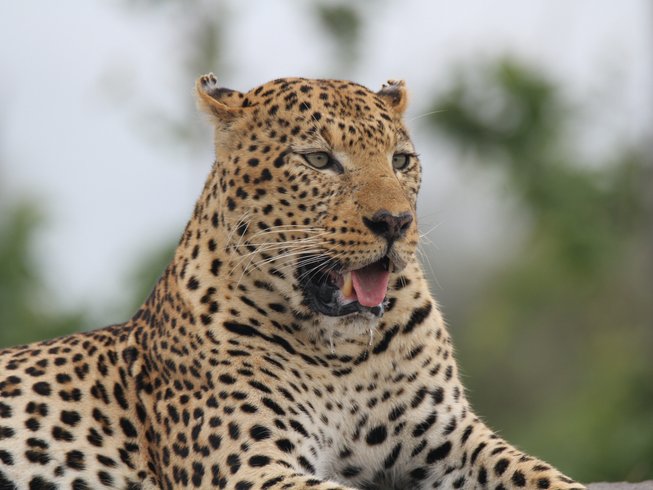 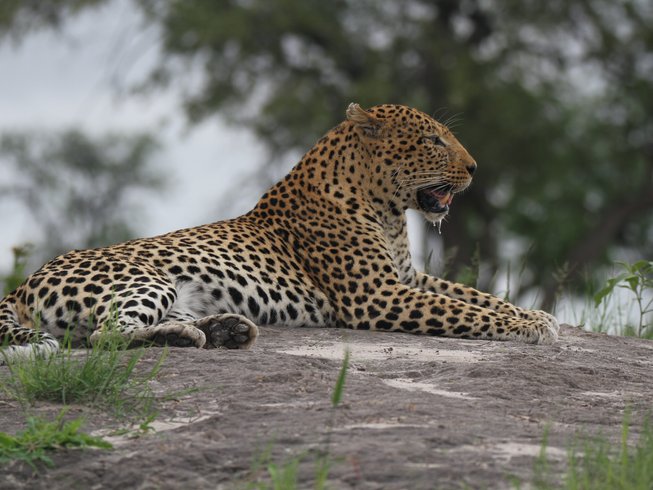 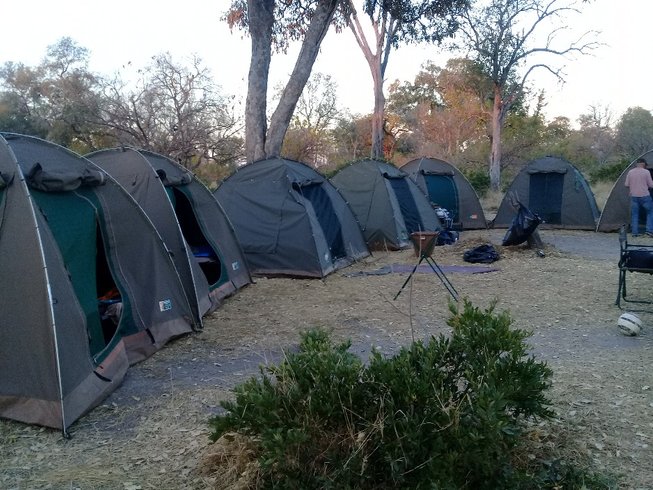 Login to save to your favorites
“Go on a wildlife adventure in Botswana!”
​
Photo
all media

Botswana is home to lots of wild animals and also fantastic national parks and game reserves. Enjanga Tours and Safaris offers you a wonderful opportunity to discover the wildlife beauty that Botswana has. Now is the perfect time to witness its beauty and splendor. Come and book now!

For this wildlife safari, you will be provided with 11 nights accommodation. Please note that showers and toilets are separated and shared.

Arrive in Maun Airport (MUB), the English speaking guide will pick you up and brief you on about the trip. After the briefing, the guide will then take you to the camping site to settle in, and later he will drive you back to town, for you to buy drinks and water for the trip, and drive you back to camp after all this.

In the morning after breakfast, you will live Maun to Central Kalahari Game Reserve. Tea, coffee, and lunch will be served on the way. An open view 4x4 Land Cruiser will be used on this trip and the vehicle will be pulling a trailer. You will arrive in the afternoon in Central Kalahari. After you pitch your tents, you will go on a late afternoon drive, then go back to the camp after sunset for dinner.

Game drives will be conducted in the morning and afternoon, lunch and dinner will be served in the camp.

In the morning after breakfast, you will depart to Nxai Pan National Park for two nights. Tea, coffee, and lunch will be served on the way. You will arrive in the afternoon. After you pitch your tents, you will go on a sunset drive and later drive back to camp for dinner.

In the morning after breakfast, you will depart to Okavango Delta for two nights. Tea, coffee, and lunch will be served on the way. The drive from Nxai Pan to Okavango Delta goes through Mau. From there, you will stand a chance to top your drinks and water before you get to the Delta.

After that, you will then meet the polers at the mokoro station who will then take you on the mokoro to the Island, dinner will be served in the night before going to bed.

In the morning after breakfast, you will depart the island to the mokoro station where you will meet the vehicle that will take you to Moremi Game Reserve for three nights. Tea, coffee, and lunch will be served on the way. You will arrive in the afternoon then after you pitch your tents, you will go for a sunset drive and you will be back to camp later for dinner.

Game drives will be conducted in the morning after breakfast and in the afternoon. Lunch and dinner will be served at the camp each day.

In the morning after breakfast, you will depart to Maun to connect your flight.

On the eighth day of this safari, you will have a mokoro excursion along Okavango Delta.

This wildlife safari tour will take place in the following national parks and game reserves in Botswana.

Nothing prepares you for the immensity of this reserve, nor its wild, mysterious beauty. There is the immediate impression of unending space, and having the entire reserve to yourself.

The Central Kalahari Game Reserve (CKGR) is the largest, most remotely situated reserve in Southern Africa, and the second largest wildlife reserve in the world, encompassing 52,800 square kilometers.

During and shortly after good summer rains, the flat grasslands of the reserve’s northern reaches teem with wildlife, which gathers at the best grazing areas. These include large herds of springbok and gemsbok, as well as wildebeest, hartebeest, eland, and giraffe.

At other times of the year, when the animals are more sparsely distributed, the experience of traveling through a truly untouched wilderness, of seemingly unending dimensions, is the draw.

CKGR is unique in that it was originally established (in 1961) with the intention of serving as a place of sanctuary for the San, in the heart of the Kalahari (and Botswana), where they could live their traditional hunter and gatherer way of life, without intrusion, or influence, from the outside world.

The reserve was closed for about 30 years until, in the 1980s and 1990s, both self-drive and organized tours were allowed in, albeit in small, tightly controlled numbers. The Botswana government has initiated plans to develop tourism away from the Okavango and Chobe areas and has allocated concessions for lodge construction, both at the peripheries of and inside the reserve, allowing for fly-in tourists.

The northern deception valley is one of the highlights, principally because of the dense concentrations of herbivores its sweet grasses attract during and after the rainy season (and of course the accompanying predators). It is also the most traveled area of the reserve, with a number of public campsites, and proximity to the eastern Matswere Gate. The other two gates are completely at the other side of the reserve, at Xade and Tsau, where public campsites are also available.

Part of the great Makgadikgadi complex, Nxai Pan National Park covers an area of 2,100 square kilometers and comprises several larger pans, Nxai Pan, Kgama-Kgama Pan and Kudiakam Pan, which were once ancient salt lakes. These larger pans are now grassed and are scattered with islands of acacia trees, and smaller pans that fill with water during the rainy season, thus providing rich resources for wildlife.

Wildlife viewing is seasonal and dependent on if and when the rains come, and when animals migrate. There are several artificial watering points. If the rains have been good, December to April is the best time to visit.

The park is one of the more accessible areas of the Makgadikgadi, a mere 50 kilometers from the Nata-Maun Road.

One of the most sought after wilderness destinations in the world, the Okavango Delta gives entrance to the spectacle of wild Africa such as dreams are made of, the heart-stopping excitement of big game viewing, the supreme tranquility and serenity of an untouched delta, and evocative scenes of extraordinary natural beauty.

The Okavango Delta is situated deep within the Kalahari Basin and is often referred to as the ‘jewel’ of the Kalahari. That the Okavango exists at all, deep within this thirstland, seems remarkable. Shaped like a fan, the delta is fed by the Okavango River, the third largest in southern Africa. It has been steadily developed over the millennia by millions of tonnes of sand carried down the river from Angola.

This gem of a national park has garnered a number of important distinctions. In 2008, it was voted the ‘best game reserve in Africa’ by the prestigious African Travel and Tourism Association at South Africa’s premier tourism fair, Indaba.

It is the first reserve in Africa that was established by local residents. Concerned about the rapid depletion of wildlife in their ancestral land, due to uncontrolled hunting and cattle encroachment, the Batawana people of Ngamiland, under the leadership of the deceased Chief Moremi III’s wife, Mrs. Moremi, took the bold initiative to proclaim Moremi a game reserve in 1963.

It is the only officially protected area of the Okavango Delta, and as such holds tremendous scientific, environmental and conservation importance. And, undoubtedly, Moremi ranks as one of the most beautiful reserves in Africa, possibly in the world.

Moremi Game Reserve is situated in the central and eastern areas of the Okavango and includes the Moremi Tongue and chief’s island, boasting one of the richest and most diverse ecosystems on the continent.

This makes for spectacular game viewing and bird watching, including all major naturally occurring herbivore and carnivore species in the region, and over 400 species of birds, many migratory, and some endangered. Both black and white rhino have recently been re-introduced, now making the reserve a ‘Big Five’ destination.

Contained within an area of approximately 3,900 square kilometers, land and delta meet to create an exceedingly picturesque preserve of floodplains, either seasonally or perennially wet, waterways, lagoons, pools, pans, grasslands, and riparian, riverine, and mopane forests. This terrain makes driving Moremi’s many loops and trails both delightful and, at times, totally inspiring.

Moremi is a very popular destination for the self-drive camper and is often combined with the Chobe National Park to the northeast. The rustic Third Bridge campsite, situated near the pretty Sekire River, flanked with thick stands of papyrus, is a favorite, creating lasting memories of resplendent Okavango sunsets.

For this wildlife safari, you will be provided with daily meals, teas or coffees.