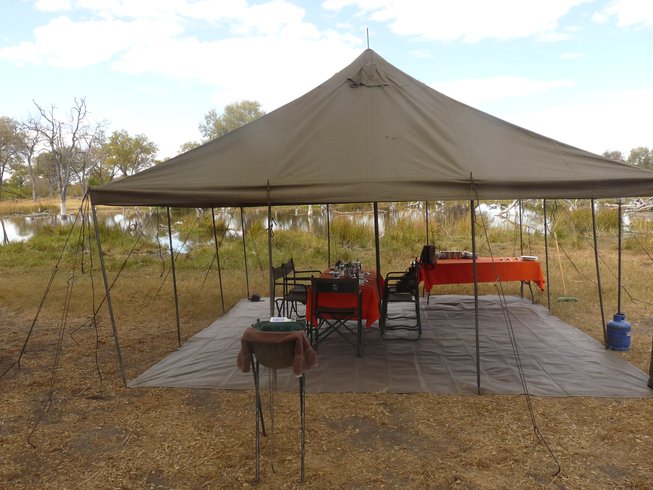 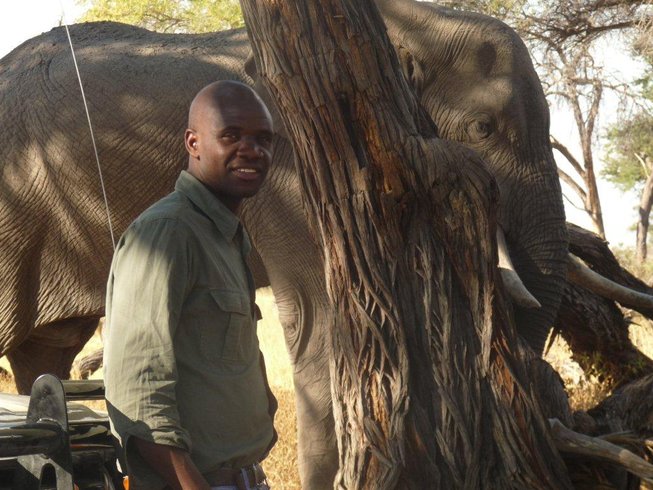 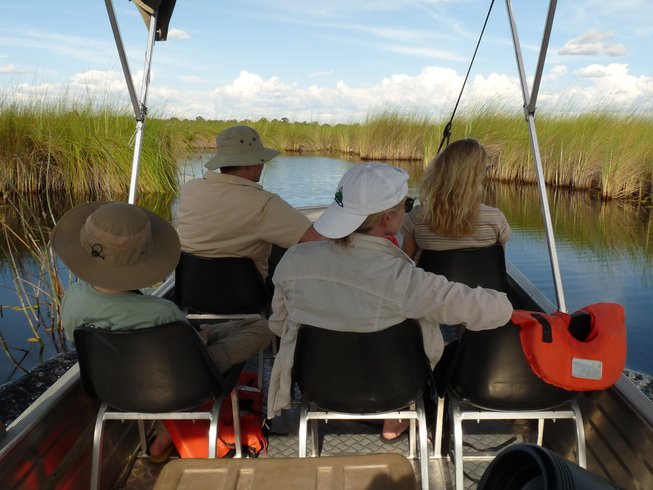 Login to save to your favorites
“Enjoy a safari of your lifetime in Botswana!”
​
Photo
all media

10 Day All Inclusive Safari in Botswana

Enjanga Tours and Safaris will guide you to experience the amazing flora and fauna of the Okavango Delta, Moremi Game Reserve, and Chobe National Park. In this trip, you will get a chance to see all the Big Five and abundant of birds life. We are here to introduce you to the unique areas of Botswana, the best way to get in touch with nature.

The tent will accommodate two beds for two people with an extension of veranda, shower and toilets. There are towels, mosquito repellent, small table and a mini wardrobe.

Arrive in Maun Airport (MUB) and depart to Xiini (Okavango Delta) by road and you will see lots of wildlife on the way. You will arrive in the afternoon and later, you will have a chance to watch the sunset while having drinks and snacks. After that, you will have a dinner and followed by seating around the fire before going to bed.

Wake up early morning, have a breakfast, and depart for a morning game drive. Tea or coffee with biscuits is served during the drive. Later, you will go back for lunch in the camp and siesta will follow with a high tea will be served before an afternoon game drive. After sunset, you will drive back to the camp and later, dinner will follow.

Wake up early morning, have a breakfast, and depart for Xakanaxa. Tea or coffee and lunch are served on the way and there are lots of games on the way. You will arrive at the camp in the afternoon. After sunset, you will drive back to the camp and later, dinner will follow.

Wake up early morning, have a breakfast, and depart for morning game drive. Tea or coffee with biscuits is also served during the drive. Later, you will go back for a lunch in the camp and siesta will follow. Then, you will have a high tea served before an afternoon boat cruise in the delta for three hours. After sunset, you will cruise back to camp and you will have a dinner.

Wake up in the morning an then after breakfast, you will go for a short game drive before heading off to Khwai. Tea or coffee and lunch will be served on the way and there are lots of game on the way. You will arrive in Khwai in the afternoon and later, you will go out for an afternoon game drive. After sunset, you will drive back to the camp and dinner will follow.

Wake up in the morning, have breakfast, and a short drive in the area before heading off to Chobe National Park. Tea or coffee and lunch will be served on the way. You will arrive in the afternoon and have a drive in the area. You will also have a chance to enjoy the sunset while having drinks. Later, you will drive back to the camp for a dinner.

Wake up in the morning, have breakfast, and depart for a short drive on the way to the airport or to the border.

One of the most sought after wilderness destinations in the world, the Okavango Delta gives entrance to the spectacle of wild Africa such as dreams are made of, the heart-stopping excitement of big game viewing, the supreme tranquility and serenity of an untouched delta, and evocative scenes of extraordinary natural beauty.

A journey to the Okavango Delta, deep into Africa’s untouched interior, is like no other. Moving from wetland to dryland, traversing the meandering palm and papyrus fringed waterways, passing palm-fringed islands, and thick woodland, resplendent with lush vegetation, and rich in wildlife, reveals the many facets of this unique ecosystem, the largest intact inland delta in the world.

The Okavango Delta is situated deep within the Kalahari basin and is often referred to as the ‘jewel’ of the Kalahari. That the Okavango exists at all, deep within this thirstland, seems remarkable. Shaped like a fan, the Delta is fed by the Okavango River, the third largest in southern Africa. It has been steadily developed over the millennia by millions of tonnes of sand carried down the river from Angola.

Swollen with floodwaters from the summer rains, the Okavango River travels from the Angolan highlands, crosses into Botswana at Mohembo in the Caprivi, then later spills over the vast, fan-shaped Delta. The timing of the floods is uncanny. Just as the waters from Botswana’s summer rains disappear (April or May), so the floodwaters begin their journey, 1300 kilometers of which is through Kalahari sands, revitalizing a vast and remarkably diverse ecosystem of plant and animal life.

This gem of a National Park has garnered a number of important distinctions. In 2008, it was voted the ‘best game reserve in Africa’ by the prestigious African Travel and Tourism Association at South Africa’s premier tourism fair, Indaba.

It is the first reserve in Africa that was established by local residents. Concerned about the rapid depletion of wildlife in their ancestral lands, due to uncontrolled hunting and cattle encroachment, the Batawana people of Ngamiland, under the leadership of the deceased Chief Moremi III’s wife, Mrs. Moremi, took the bold initiative to proclaim Moremi a game reserve in 1963.

It is the only officially protected area of the Okavango Delta and as such holds tremendous scientific, environmental, and conservation importance. And, undoubtedly, Moremi ranks as one of the most beautiful reserves in Africa, possibly in the world.

Moremi Game Reserve is situated in the central and eastern areas of the Okavango and includes the Moremi tongue and chief’s island, boasting one of the richest and most diverse ecosystems on the continent.

This makes for spectacular game viewing and bird watching including all major naturally occurring herbivore and carnivore species in the region and over 400 species of birds, many migratory and some endangered. Both black and white rhino have recently been re-introduced, now making the reserve a ‘Big Five’ destination.

Contained within an area of approximately 3,900 squeare kilometers, here land and delta meet to create an exceedingly picturesque preserve of floodplains, either seasonally or perennially wet, waterways, lagoons, pools, pans, grasslands and riparian, riverine, and mophane forests. This terrain makes driving Moremi’s many loops and trails both delightful and, at times, totally inspiring.

Moremi is a very popular destination for the self-drive camper and is often combined with the Chobe National Park to the northeast. The rustic Third Bridge campsite, situated near the pretty Sekiri River, flanked with thick stands of papyrus, is a favourite, creating lasting memories of resplendent Okavango sunsets.

The Khwai community concession deserves special mention due to its proximity to the Moremi Game Reserve and the Okavango Delta, and the fact that it operates under different beneficial rules to most other regions. That’s the right place to do bush walks and have a chance to see the local. “Cultural tour”.

This area is deemed to be a private concession and is of outstanding beauty, delivering the same reputation as the above two mentioned, in that the diversity of game and vegetation is shared. Much smaller in size, its real benefit is accessibility. The main border is along the Khwai River, the others being Moremi Game Reserve to the west, the entrance to the Savuti area to the north, and a little-used area of the Chobe National Park. This concession is run by the members of the Khwai village community and extends from their village to Mababe village to the east.

As ever, there are no fences around the neighboring national parks and the game is free to roam in and out as it wishes. Khwai is an area of outstanding beauty and due to the arid conditions to the north towards Savuti, the game will flock to the Khwai River, especially in the drier winter months.

Truly at the interior of the park, Savuti boasts most of the Chobe species, except for water-loving antelope. It is best known for its predators, particularly lion, cheetah, and hyena, of which there are large resident populations.

The Savuti channel flows from the Linyanti River for about 100 kilometers, carrying water away from the river and releasing it into a vast swampland called the Savuti marsh and further south onto the Mababe depression, which is also fed by the Ngwezumba River from the northeast. The Mababe, immense and flat and fringed by thickets of trees, was once part of the Makgadikgadi super-lake. When filled with water, it becomes the venue for thousands of migratory birds and animals, particularly large herds of zebra.

Geographically, Savuti is an area of many curiosities. One of its greatest mysteries is the Savuti channel itself, which has over the past 100 years inexplicably dried up and recommenced its flow several times. This irregular water flow explains the numerous dead trees that line the channel, for they have germinated and grown when the channel was dry and drowned when the channel flowed again.

Whether arriving by air or road, the first glimpse of the river, deep and dazzling in the sandy terrain, is always breathtaking. It appears as a swathe of brilliant, peacock blue ribbon, winding its way through the tiny town of Kasane and ensuing wilderness, the Chobe National Park.

Undoubtedly one of Africa’s most beautiful rivers, the Chobe supports a diversity and concentration of wildlife, unparalleled anywhere else in the country. Established in 1968, the park covers approximately 11,700 square kilometers, encompassing floodplains, swamps, and woodland. The Chobe River forms its northern boundary. There are four distinct geographical areas in the park: the Chobe Riverfront, the Ngwezumba pans, Savuti, and Linyanti.

The most accessible and frequently visited of Botswana’s big game country, the Chobe Riverfront is most famous for its large herds of elephants and cape buffalo, which during the dry winter months converge upon the river to drink.

During this season, on an afternoon game drive, you may see hundreds of elephants at one time. You may be surrounded by elephants as the main Serondella road becomes impassable and scores of family herds cross the main road to make their way to the river to drink, bathe, and play.

Driving the loops that hug the river’s edge, you may see up to 15 different species of animals on any one game drive, including waterbuck, lechwe, puku (this is the only part of Botswana where they can be seen), giraffe, kudu, roan and sable, impala, warthog, bushbuck, monkeys, and baboons, along with the accompanying predators lion, leopard, hyena and jackal.

Please book your flight to arrive at Maun Airport (MUB). Transfer from and to the airport is included. Enjanga Tours and Safaris will pick you up from the airport.