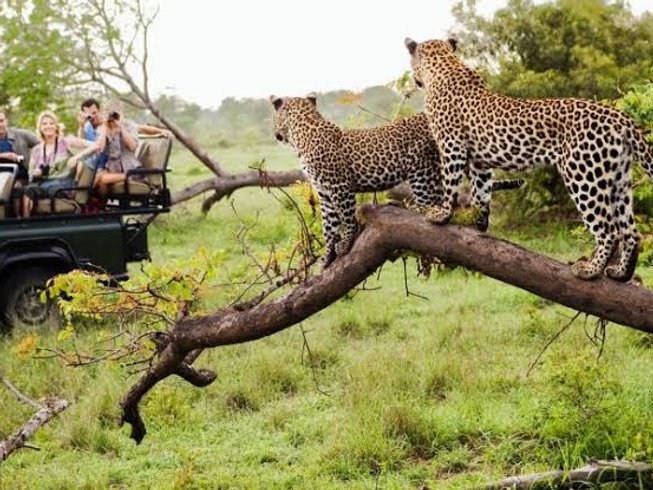 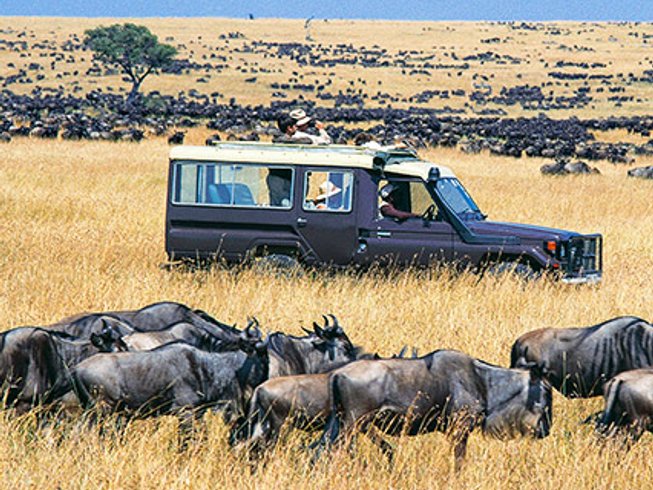 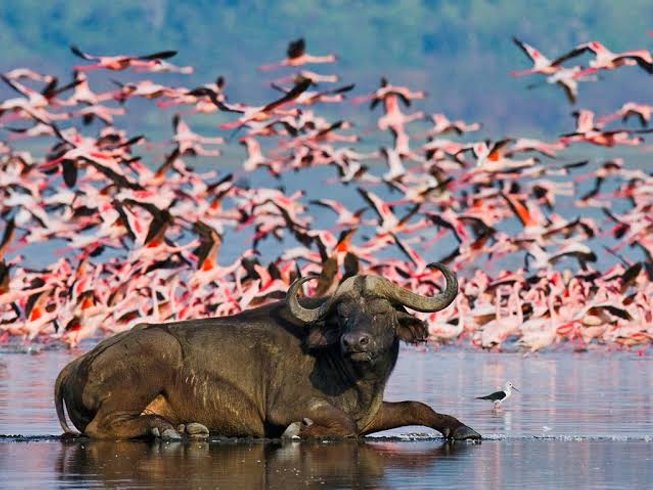 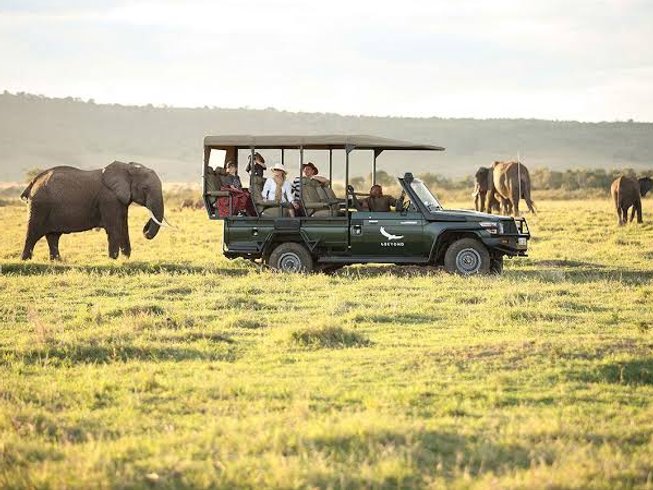 Price shouldn’t stand between you and your dream of experiencing an African safari. With this tour, you will still be able to see the best parts of Kenya including Tsavo East, Amboseli, Lake Nakuru, and Masai Mara. Join East Africa Adventure Tours and Safaris for private game drives nearly every day and spot African wildlife in its natural habitat.

Voi Safari Lodge's features include internet, pool with a view, concierge, mosquito net, fireplace, non-smoking rooms, and family rooms. You will be staying here on your first and second night.

Kibo Safari Camp has 73 self-contained tents for single, double, triple and family accommodation. The beds have been custom designed and locally made using bush logs and will ensure a good night’s sleep! All tents have flush toilets, showers, and wash basins. You can enjoy your shower as you like: bubbling hot or refreshing cold. Your third night will be spent here.

Maili Saba Camp offers accommodation with free WiFi, a terrace or a patio, and access to a garden and a year-round outdoor pool. The units offer a view of the Menengai Crater. The rooms also feature a private bathroom while some rooms are interconnected with the kid's room. Mosquito nets are available on request. This will be your accommodation on the fourth night.

Surrounded by a serene park, Sweet Lake Resort in Karagita offers a restaurant, a garden and outdoor pool. Free WiFi is available. The rooms will provide you with a seating area, satellite TV, and mosquito nets above the beds. Guests can enjoy garden views. The bathroom is fitted with a shower and free toiletries. Your fifth night will be spent here.

The camp is set amongst trees and offers a tranquil haven amongst the bushveld. The tents come fitted with a mosquito net, safe, and a balcony. Each tent has a bathroom with a shower. Extras include towels and linen. You will be staying here on your sixth and seventh night.

Pick up from your hotel in Nairobi at 7 a.m. and depart for Tsavo East National Park. The park is noted for its vast elephant herds and a variety of games including giraffe, buffalo, zebra and waterbuck, crocodiles. Arrive in time for lunch at Voi Safari Lodge and embark on an afternoon game drive afterwards. Dinner and overnight at Voi Safari Lodge.

After breakfast, drive to Taita Hills Sanctuary with packed lunches. Game drive in the sanctuary until evening. Drive back to Voi Town for dinner and overnight at Voi Safari Lodge.

Breakfast and depart for Lake Nakuru National Park, famous for its millions of seasonal pink flamingos and other aquatic birds. You will have packed lunched on the way. After lunch, embark on a game drive in the park and around the lake. Dinner and overnight at Maili Saba Camp.

After breakfast, drive to Lake Bogoria which is a shallow soda lake with beautiful scenery, and home to flamingoes plus hot springs and geysers. After lunch, drive to Lake Naivasha, arriving in time for dinner and overnight at Sweet Lake Hotel.

After breakfast, depart for Masai Mara National Reserve, one of East Africa’s most famous reserves. The Mara consists of undulating hills and great rolling grasslands that sustain some of the most varied wildlife in Africa, if not the world. Arrive in time for lunch at Enchoro Tented Camp.

Embark on an afternoon game viewing where lions, elephants, cheetahs, giraffes, buffaloes, wildebeests, gazelles, and other plains game abound, not forgetting the hundreds of species of birds. Dinner and overnight at Enchoro Tented Camp

The whole day is dedicated to game spotting in this sprawling reserve. You can watch a lion, cheetah, or leopard hunting or feasting on its kill. You will also have the option of a visit to a Masai village or a hot-air balloon ride that starts at 6 a.m. and ends with a champagne breakfast on the plains. What an exhilarating experience! All meals and overnight at Enchoro Tented Camp.

After breakfast drive to Narok town for lunch. Afterwards, proceed to Nairobi.

This tour package can be customized to suit your specific interests, budget, and preferred date of travel. Please get in touch with East Africa Adventure Tours and Safaris and their safari specialists will recommend the most ideal itinerary.

Tsavo East National Park offers great wildlife viewing in pristine wilderness. All of the Big Five are here. Elephants are common, and their red dust coating makes them stand out against the arid environment. Of the big cats, lions are most easily spotted. Buffalo, zebra, and plenty of Masai giraffes are some of the other animals you can expect to see.

The Taita Hills, a fertile area of verdant hills and scrub forest, is a far cry from the semi-arid landscape of Tsavo. Within the hills is the private wildlife sanctuary, covering an area of 100 square kilometers, the landscape is dramatic and all the plains wildlife is here in abundance. Visiting involves a good mix of pretty landscapes, good birdwatching, and decent mammal populations - nothing is guaranteed here but lions and elephants are frequently sighted.

Amboseli National Park is in southern Kenya. It’s known for its large elephant herds and views of immense Mount Kilimanjaro, across the border in Tanzania. Observation Hill offers panoramas of the peak and the park’s plains and swamps. Varied wildlife includes giraffes, zebras, cheetahs, and hundreds of bird species.

Lake Nakuru is among Kenya's finest national parks. Flanked by rocky escarpments, pockets of acacia forest, and at least one waterfall, the park is gorgeous year-round and is home to both black and white rhinos, lions, leopards, hippos, and endangered Rothschild's giraffes. Rising water levels in 2014 forced the park's famous flamingos to flee (although a small number had returned at the time of research), and the lake is now hauntingly surrounded by drowned trees.

Lake Bogoria is backed by the bleak Siracho Escarpment, and moss-green waves roll down its rocky, barren shores. A road that becomes a rough track (and then peters out entirely) runs along the lake’s western shore, which is where flamingos gather. About halfway along the lake, hot springs and geysers spew boiling fluids from the earth’s insides.

Hugged by grassy banks and shingled with cacti and sand olive trees, the Rift Valley's highest lake (at 1884 meters above sea level) extends like a vast, sunlit sea. But there's more to this spot than the lovely blue lake. You can ride among giraffes and zebras, sip on a glass of Rift Valley red, look for hippos on the lake, and relax in the garden at Elsamere, the former home of late Born Free personality Joy Adamson.

Situated in the southwest of Kenya, covering an area of 1510 square kilometers (583 square miles), the Masai Mara National Reserve is a land of breathtaking vistas, abundant wildlife and endless plains. The quintessential Masai Mara safari delivers many attractions, as the reserve is home to an excellent year-round concentration of game, including the more than two million wildebeest, zebras, and other antelopes that make up the famous Great Migration.

During this safari, your daily breakfast, lunch, and dinner are included in the price.

Please book your flight to arrive at Jomo Kenyatta International Airport (NBO). Transfer from the airport is included in the price. East Africa Adventure Tours and Safaris will pick you up from the airport.