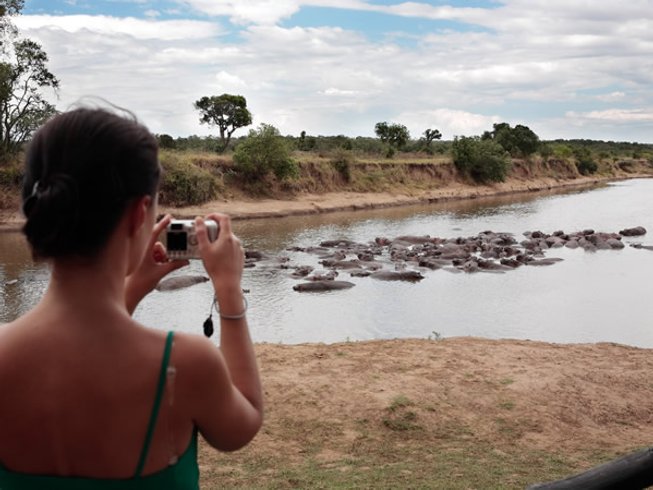 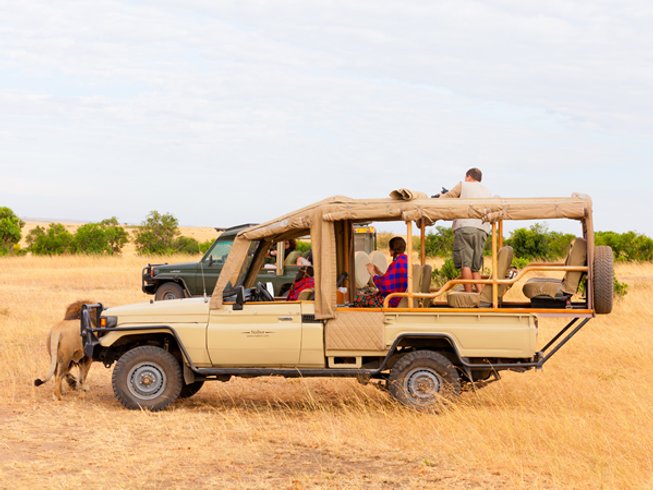 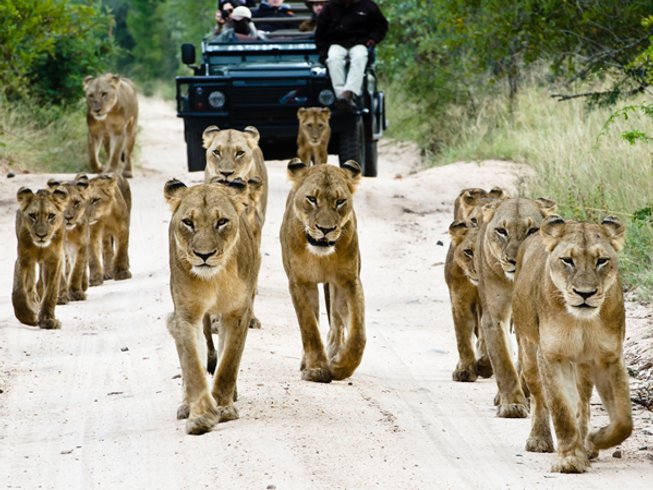 Login to save to your favorites
“Visit the best safari destination in Tanzania!”
​
Photo
all media

Tanzania is regarded as one of the big countries in East Africa and is one of the countries with many big national parks and reserves. The most common and famous are located in the northern part which includes Serengeti National Park, which is known for the great wildebeest migration, Ngorongoro National Park and its crater lake, and as well as the Lake Manyara National Park. These are what make the best safari experience in Tanzania that are mostly preferred by millions of people.

During this safari, you will have five nights of accommodation in a lodge near the parks that you will visit. Please note that Denhum Holidays can also accommodate other lodges or tented camps of your preference. Please send them an inquiry for the pricing details.

On your first two nights, you will stay at Ngorongoro Sopa Lodge. Facing the always magnificent sunsets to the west, and located at the highest point on Ngorongoro Crater’s entire rim, Ngorongoro Sopa Lodge stands well over half a kilometer above the crater floor and offers unparalleled views across the enormous caldera.

Themed around traditionally circular African houses with conical roofs, and decorated with examples of Africa’s rich tapestry of artistic traditions by way of rich wood carvings and sculptures, the lodge harmonizes perfectly with its dramatic surroundings.

But the drama does not just stop with the great outdoors, it also flows through the split level interiors of the main building which all offer an unsurpassed generosity of space while somehow managing to combine an almost magically welcoming ambiance of both warmth and coziness.

On the next two nights, you will stay at Serengeti Sopa Lodge. Located on the edge of the escarpment overlooking the plains of the southwestern Serengeti National Park, home to many thousands of wild and rare animals, Serengeti Sopa Lodge lies within an area of outstanding natural beauty. An oasis of cool relaxation from the equatorial sun.

The lodge allows its guests to experience magnificent sights and enjoy interaction with the land and animals difficult to find elsewhere, whilst at the same time enjoying the highest level of cuisine and hospitality.

Meanwhile, on your last night, you may stay at Kirurumu Tented Lodge. It is set high on the edge of the Great Rift Valley, enjoying a marvelous, uplifting, and panoramic view eastward over Lake Manyara, the rift floor, and Mount Losimingori. Behind Kirurumu, the Ngorongoro Highlands rise in green and fertile splendor and form the gateway to Ngorongoro Crater and, finally, Olduvai Gorge, the Serengeti.

Today, you will be met in Arusha. After lunch, you will drive through the Ngorongoro Highlands to your lodge situated on the rim of the crater. The crater covers over 300 square kilometers of land and is the home of the rare black rhino, prides of lion, elephant, cheetah, and great herds of buffalo, antelope, and wildebeest. Dinner and overnight will be at a lodge in Ngorongoro.

On this day, you will descend over 600 meters to the floor of the crater for a day crater tour. You will be able to explore the forest areas that are inhabited by monkey and elephant. In the lake area, you may see the flamingos and the open savanna where the lions hunt for food. Picnic lunches will be served in the crater. Dinner and overnight will be at a lodge in Ngorongoro.

After breakfast, you will drive to Olduvai Gorge, the site of Louis and Mary Leakey’s renowned archaeological discoveries. Their findings include some of the man’s earliest known ancestral remains. Then, you will continue to Serengeti National Park in time for lunch.

The enormous park supports every variety of animal imaginable, from large predators such as lion, leopard, and cheetah to the smaller herbivores they prey on. You will have an afternoon game drive. Dinner and overnight today will be at a lodge in Serengeti.

On this day, you will spend a whole day on a game drive in this national park, which is rich with all different species of animals. To maximize your game viewing, you will carry a picnic lunch with you and spend a full day in the Serengeti National Park. Dinner and overnight will be at a lodge in Serengeti.

You will have your breakfast at your lodge. Then you will drive to Lake Manyara, a soda lake lying in the Great Rift Valley. You will also have your lunch there. In the afternoon, you will have a game drive in Lake Manyara National Park, the home of the tree-climbing lions.

Apart from the varied types of landscape including jungle, swamp, and savanna, there are also a large variety of animals including giraffe, zebra, elephant, gazelle, hippos, monkeys, and about 400 different species of birds. Dinner and overnight will be in a lodge around Lake Manyara.

This day is the last day of your safari trip. After breakfast, you will drive to Arusha and have your lunch in a restaurant.

Please note that even though this safari is available all year round, the annual great wildebeest migration only takes place from June to October every year.

The Ngorongoro Conservation Area is a UNESCO-protected World Heritage Site and an International Biosphere Reserve. It is a pioneering experiment in multi-purpose land use where people (the Maasai), their livestock, and wildlife coexist and share the same protected habitat. The craters of Ngorongoro and Empakai are reserved exclusively for wildlife, while the rest of the conservation area is shared by wildlife, people, and livestock.

The Maasai, the main resident of Ngorongoro, are pastoralists who move widely with their herds of cattle, sheep, goat, and donkeys in search of pasture and water. In recent years, the Maasai have been encouraged to work on the land and supplement their traditional diet of milk and meat.

The Ngorongoro Crater, which is the central attraction in the area, is the largest caldera in the world that has its walls intact. The Ngorongoro Crater floor, a sheer drop of 610 meters below the crater rim, has an area of about 300 square kilometers, with a diameter of 19 kilometers. The sight of the Ngorongoro Crater is simply stunning. “There is nothing with which to compare. It is one of the wonders of the world….” once wrote Professor Bernard Grzimek.

The crater floor is home to tens of thousands of plains animals, including wildebeest, zebra, gazelles, elands, and a large predator population of lions, hyena, and jackal which can all be viewed at close quarters. The rare black rhino can be viewed there, and if you are lucky, you can see cheetah and leopard.

The rain season is between November and May. The altitude at the crater rim is about 2,286 meters above sea level, and temperatures can get quite chilly in the evening, especially between May to September.

A World Heritage Site and recently proclaimed a world-wide wonder, Serengeti National Park is undoubtedly one of the most famous wildlife sanctuaries in the world. The park is located some 320 kilometers to the northwest of Arusha, lying in a high plateau between the Ngorongoro highlands and the Kenya - Tanzania border, and extending almost to Lake Victoria to the west, covering a total area of 14,763 square kilometers.

Aptly named “endless plains” by the Maasai people, you will immediately experience the vastness as you enter the southeastern plains of the park from Ngorongoro. Declared a protected area in 1921 and gazetted as national park in 1951, Serengeti is the oldest national park in Tanzania.

The principal features of the Serengeti are the short and long grass plains in the south and east, the acacia savanna in the central areas, the hilly and densely wooded areas in the north, and the extensive woodland in the west. There is a variety of scenery, which includes the plains, lakes, hills, and the rock outcrops called kopjes. The main game drive areas in the Serengeti are the Seronera Valley, the Western Corridor, and northern Serengeti.

The Seronera Valley in central Serengeti, endowed with permanent surface water, attract a large concentration of wildlife throughout the year. Common animals that can be seen there are lions, buffaloes, impalas, hippos, waterbucks, elephants, cheetahs, the leopard, and over 400 species of birds. Serengeti provides sanctuary to the highest concentration of plains animals in the world.

Located 125 kilometers west of Arusha Town, on the foot of the wall of the Great Rift Valley, Lake Manyara National Park is one of the oldest and most popular sanctuaries in East Africa. The park has a large variety of habitats, making it possible to support a wealth of wildlife in its small area.

The main habitats include the shallow soda lake itself which occupies 77% of the national park total area of 330 square kilometers, the ground water forest, open grassland, acacia woodland, and the rift wall. The most famous spectacle in the park is the tree-climbing lions, which are occasionally seen along branches of acacia trees. Other animals found in the park include buffalo, elephants, leopards, baboons, impala, giraffes, zebra, wildebeest, ostrich, and hippos.

Popularly referred to as an ornithologist’s paradise, Lake Manyara National Park contains over 400 bird species found in most savanna and river habitats in East Africa. Common water birds to be seen there are pelicans, spoonbills, Egyptian geese, and the migratory flamingos, which arrive in hundreds of thousands creating one of Africa’s great natural sights over the soda lake.

You will be provided with three daily meals as per itinerary.

During your free time, you may take nature walks at an additional cost.

Please book your flight to arrive at Kilimanjaro International Airport (JRO). Transfer from and to the airport is included. Denhum Holidays will pick you up from the airport.