8 Days Classic Safari Exploration in Kenya
This listing has no upcoming availability. Check out these similar experiences 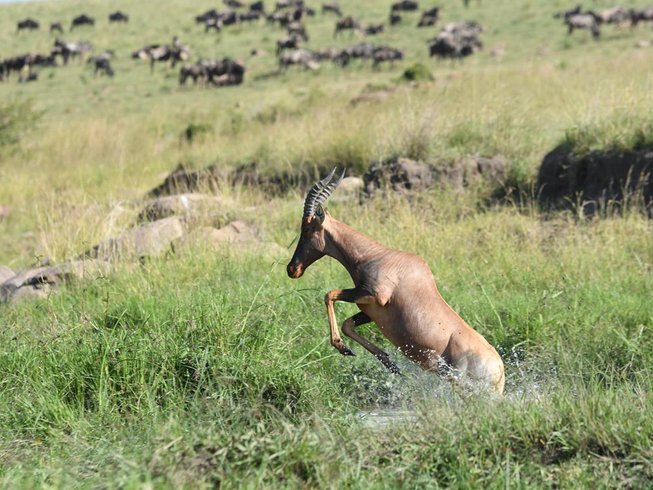 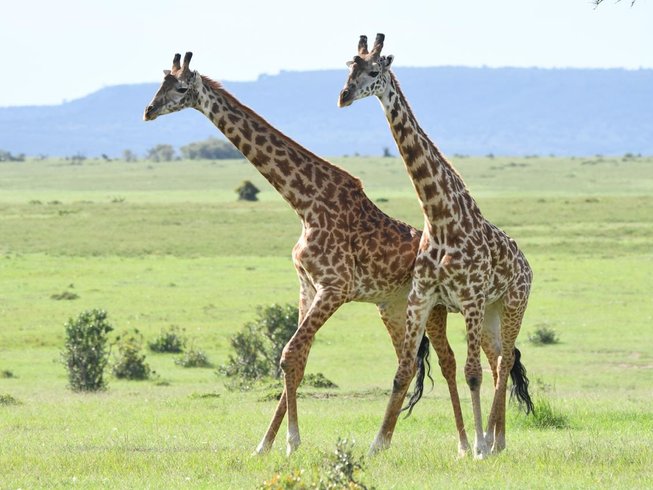 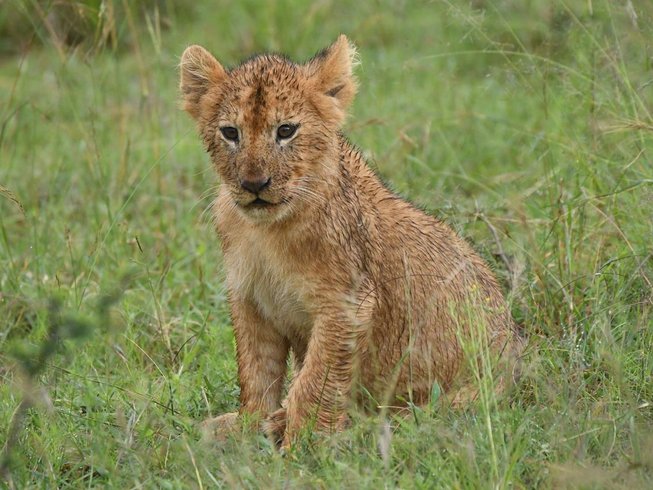 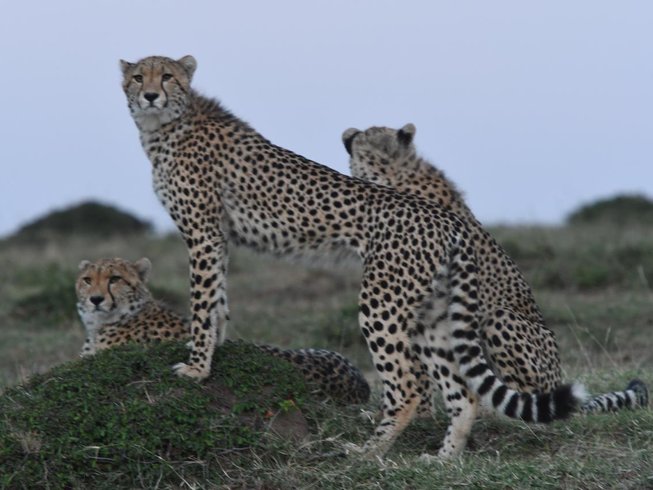 This safari takes you to an exciting mix of Kenya’s finest wildlife destinations, offering loads of activities to keep you enthralled! Accommodation is carefully selected for maximum comfort, while the itinerary is designed to keep driving distances to a minimum, making this the ideal mid-range trip for people wanting to explore East Africa. Activities include visiting a rescue chimpanzee sanctuary and a black rhino breeding area, lion tracking, night drives, boat trip on Lake Naivasha, nature walk with the local Maasai, optional village visit, optional hot air balloon safari, and dinner at the Carnivore restaurant.

The Panari Hotel Nairobi offers five-star luxurious and comfortable space to relax, unwind, and rejuvenate in an ideal location that is conveniently 10 minutes away from Jomo Kenyatta International Airport Nairobi. The Panari Hotel Nairobi exudes tranquility in exquisite surrounding and creates a warm feeling of unpretentious luxury.

Embrace the awe-inspiring natural beauty of your surroundings and set the stage for a visit you won’t soon forget. Located within the sprawling Ol Pejeta Conservancy, one of Kenya’s most noteworthy conservancies and home to the "Big Five" (elephant, rhino, lion, buffalo, and leopard), Sweetwaters Serena Camp offers a holiday experience unlike any other.

Small and exclusive, comprising of only 25 tents. The tents are furnished with the understated luxury required by the modern traveler. Cozy, warm, and inviting with a personal touch, Flamingo Hill Camp offers the traveler a home away from home!

Set in 150 acres of grassland studded with Acacia bushes and trees, the resort is not only home to the resident giraffe, waterbuck, and both Vervet and Colobus monkeys but it is also a night stop for the hippos when they leave the lake every night to come and trim the grass on the expansive lawns. Boat rides, horse rides, biking, outdoor boma dining area, bird watching, nature walks, and card and board games are offered.

Settled down in the middle of the African bush, Loyk Mara Luxury Camp will give you a sensation of privacy and rest, granting a vivifying cool under-the-shade of sprawling crones of undersized trees within a hot day. The camp provides all the necessary facilities for your comfortable stay with children from two years old and above.

They have a baby-friendly menu, baby chairs, and baby cots upon your request. Besides all other facilities, they have 24-hour electricity in both public and private areas at the camp, powered by a solar panel with the diesel generator on backup, hot and cold water showers, flushing toilets, intercoms, Wi-Fi, and DSTV.

Jambo! Upon arrival at the airport in Nairobi, you will be met by Classic Journeys Africa's customer care representative who will assist you with the transfer to your hotel. Before checking in at the hotel, he will brief you on your program ahead and introduce the driver-guide who will be with you throughout the safari.

After breakfast, your driver will pick you up from the hotel and drive you north towards the Mount Kenya region. The whole afternoon is spent visiting rescued chimpanzees at Sweetwaters Game Ranch. Set inside the Ol Pejeta Conservancy, Sweetwaters gives rescued chimps a second chance at a normal life. Sweetwaters is Kenya’s only sanctuary for the rehabilitation of chimpanzees.

Numbering nearly 40 animals, Sweetwaters provides an environment as close to their natural habitat as possible. The chimps are split into two groups separated by the Ewaso Nyiro River. The conservancy is also a dedicated black rhino breeding area, making it an unforgettable stopover. In the evening, enjoy dinner and spend the night at a tented camp.

This morning, leave Sweetwaters after breakfast and head for Lake Nakuru National Park. Arrive at a camp in good time for lunch and after a refreshing stop, head out for an afternoon game drive. Lake Nakuru, a soda lake on the floor of the Great Rift Valley is rich in birdlife and home to over 400 different species.

The sight of millions of flamingoes making the lake appear ringed in pink is spectacular. In addition to the abundant birdlife, it is also an important haven for the endangered species of Rothschild's giraffe and both black and white rhinos. Lake Nakuru is rich in wildlife giving you and your family the chance to spot lions, waterbuck, buffalo, baboons, and much more. The park boasts a huge variety of animals.

Today, indulge in a leisurely breakfast before driving to Lake Naivasha. Have a chance to experience the wonderful boat ride at Crescent Island as you enjoy game viewing from a different perspective. Later, return to your resort for relaxation and personal leisure.

After breakfast and a short briefing by your driver-guide, drive to the world-famous Masai Mara National Reserve, the backdrop to "the greatest wildlife spectacle on earth", the annual migration of over one million wildebeests. Arrive in time for lunch at your camp. Spend the afternoon on safari in Kenya’s most popular reserve.

Your day will be spent on safari in Africa’s richest wildlife viewing arena. Historically teeming with wildlife, the Mara hosts Kenya’s largest lion pride and elephant herds. Other predators include leopard, cheetah, and spotted hyena; while in the Mara River, you will see fat pods of hippo and vast Nile crocodiles. Other highlights include giraffe tops, gazelle, zebra, buffalo, and over 550 species of birds.

For an extra fee, visit the Masai Local villages. The Maasai have lived on these plains for centuries and your guide will share his experience and expertise with you. Learn about the fauna and flora of the region and the way that the Maasai people use the plants. Your guide will teach you the hidden secrets of the African savannah, like how to find medicine in the bush and how to track wildlife and birds.

After this thoroughly informative and fascinating excursion, visit the Maasai manyattas. At this local village, a local Maasai guide will give you an intriguing account of the Maasai people and their age-old traditions. You will have the opportunity to see first-hand an ancient way of life that still survives on the plains of Mara today.

Finally, participate shoulder-to-shoulder in some local Masai traditional dance. As the sun sets on a fulfilling day, return to your scenic tented camp for dinner and a relaxing overnight surrounded by nature.

Have yet another day of unlimited game viewing and relaxation at your camp. spend a full day exploring the Maasai Mara National Reserve in search of the Big Five of Africa. From July to October, you may also see the spectacular annual wildebeest migration. At an extra amount, have the chance to take an unforgettable hot air balloon safari above the wildlife with a well-prepared champagne breakfast awaiting your landing.

The famous Masai Mara Game Reserve is Kenya’s most popular and most visited game sanctuary. It was used as the location of the well-known film "Out of Africa" because of its spectacular scenery and outstanding natural beauty. Mara is home to a huge variety of plains wildlife from wildebeest and zebra to lions, cheetah, and hyenas.

From July to August, the park hosts one of nature’s truly great events. Millions of wildebeest, zebra, and gazelle migrate from the Serengeti, across the Tanzania border and the Mara River to reach the sweetgrass plains of the Maasai Mara National Park. It is awash with high drama.

Day 8: End of Tour in Nairobi

After breakfast, bid farewell to the Masai Mara as you set on your journey back to Nairobi. Drive back down the Great Rift Valley to Nairobi, passing the dormant volcano, Mount Longonot, and lakes Elementaita and Naivasha on the way. Keep an eye out for herds of giraffe and gazelle and head up the escarpment.

You will arrive in Kenya’s bustling capital city, Nairobi, in the late afternoon. Spend time doing last-minute shopping and later have lunch at the spontaneous Carnivore Restaurant where you will have a variety of finger-licking meat. You will be dropped off at the airport to bid farewell to your driver-guide until the next time. Say goodbye to the wonderful guide and promise to join Classic Journeys Africa on another expedition!

Kenya sits halfway down the East Coast of Africa, astride the equator. It is the most accessible country in the region. Kenya is the home of safari and one of the world’s top holiday destinations. Kenya’s appealing world of attractions ranges from stunning landscapes, cultural diversity, adventure sports, and beautiful beaches to unique wildlife.

It is fascinating from the sheer diversity of its many game parks. One of the greatest sights is the annual migration of two million wildebeest, together with half a million zebras, and thousands of gazelles across the endless savannah. Kenya boasts as the only country in the world with a national park in the capital

The following meals are included at the accommodations:

Complimentary 1.5-liter mineral water per person per day will also be provided in the safari vehicle.

Please arrange your flight to arrive at Jomo Kenyatta International Airport (NBO). Transfers are included in the package, Classic Journeys Africa will pick you up from the airport.