3 Days Etosha Camping Safari in Namibia
This listing has no upcoming availability. Check out these similar experiences 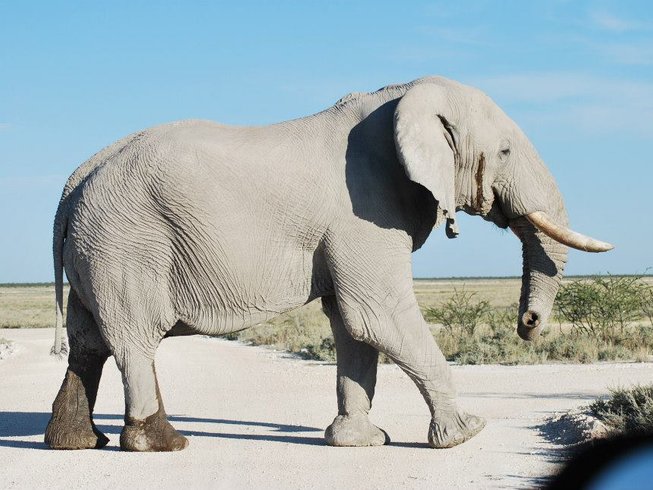 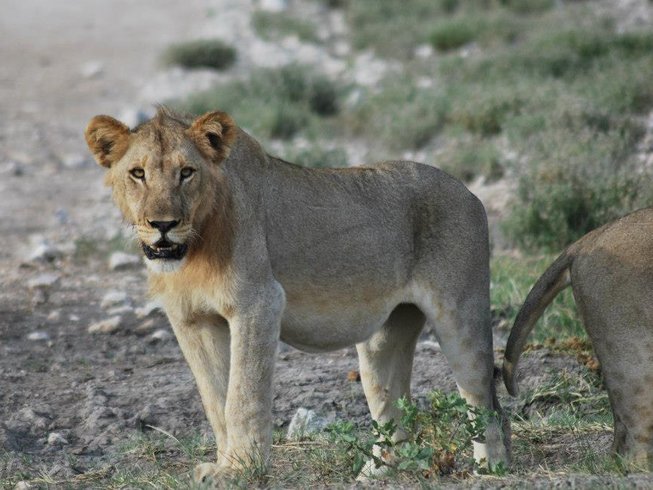 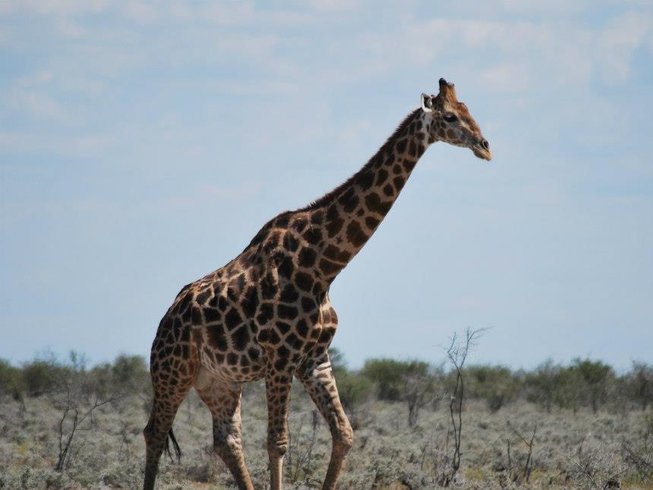 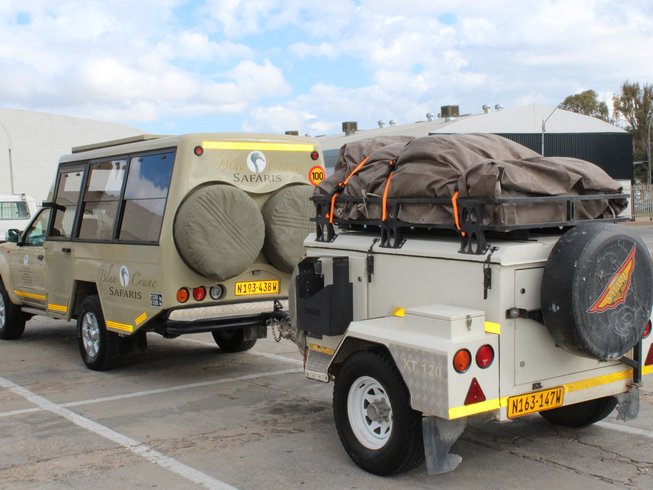 Login to save to your favorites
“Visit Etosha National Park!”
​
Photo
all media

Experience untamed Africa on this safari tour at one of the greatest wildlife viewing venues, the Etosha National Park. Etosha is Namibia's premier game reserves and home to hundreds of species of mammals, birds, and reptiles making it the perfect safari destination. Abundant wildlife congregates around the waterholes, allowing for superb game viewing opportunities.

This is a camping tour and you will be camping inside the etosha national park at campsites with toilets and running water.

Your adventure starts when the guide picks you up from the hotel between 08:00 and 08:30. You shall depart the city via the B1 to the north, embarking on an adventure to the world famous Etosha National Park. You will have a long drive today. On the way, you will stop in Otjiwarongo to fill up with petrol and get provisions. You will have a picnic lunch along the way.

You will reach your destination after entering western Etosha through the Andersson Gate and arriving in Okaukuejo. After settling into your rooms in the afternoon, you will have time to explore the surroundings and enjoy the swimming pool before a late afternoon game drive. After dinner, a visit to the floodlit waterhole is strongly recommended as there is a good chance of seeing rhinos and lions.

Today, you will spend most of the day game driving. You will visit a number of waterholes and make a stop at the Etosha Pan, the “place of dry water." The Pan is an extensive flat depression of about 5,000 square kilometers. This great white expanse is a place of shimmering mirages. Seeing large herds of game in this setting makes Etosha a unique experience in Namibia and Africa. You may stop at Halali middle camp to have lunch before you continue the game drive to Namutoni.

You will have time to relax in the swimming pool in Namutoni or at the waterhole before a late afternoon game drive. The game viewing is usually excellent with close views of springboks, zebras, impalas, giraffes, gemsboks, and plenty of birds. You may also have some close encounters with elephants and lions. In the evening, you may enjoy a glass of wine and experience a fabulous sunset from the tower of the old Namibian-German fort before dinner.

After a morning safari game drive, you will have an opportunity to get some more pictures of Etosha's wildlife. In the soft morning light, you will depart Etosha via the Von Lindequist Gate and head back to the city. You will travel on the main road (B1), making a short detour to Lake Otjikoto which was discovered in 1851 and is distinguished by its emerald-green waters.

Just before reaching Windhoek, you will stop in the small town of Okahandja and visit Namibia's largest wood carving market. You are likely to arrive back in the city at around 16:30 and you will be dropped off at your accommodation.

This safari holiday will take place at Etosha National Park, Namibia. Situated in northern Namibia, the park spans an area of 22,270 square kilometers and is largely covered by a salt pan.

You have two breakfasts, three lunches, and two dinners included in the price.

You can take an optional city tour of Windhoek, visiting the most important cultural and historical monuments.

The Alte Feste (Old Fortress) is a fortress and museum in downtown Windhoek. The building was designed by captain Curt von François to serve as headquarters of the imperial German Schutztruppe (colonial military force) during German colonization of South-West Africa. The location of Windhoek, which was deserted and completely destroyed at that time, was chosen because the Germans felt it would serve as a buffer zone between the Nama and Herero tribes. The fort was, however, never involved in any military action.

The foundation was laid on 18 October 1890 by then Schutztruppe private Gustav Tünschel. The building was redesigned multiple times during its first years; its final layout was only completed in 1915. It consists of an inner courtyard with high walls and accommodation for the troops on the inside, as well as four towers. Alte Feste is the oldest surviving building in the city which subsequently developed around it.

After the World War I German surrender in South West Africa, Windhoek was occupied by the South African Army in March 1915. Alte Feste now served as military headquarters for the South African Union troops. In 1935, the fort was used for a more peaceful purpose when it was converted into a hostel for the adjacent Windhoek High School. Already severely dilapidated, it was declared a National Monument in 1957.

The building was renovated extensively in 1963, and since then accommodates the National Museum of Namibia. Since 2010 the Reiterdenkmal, Windhoek's well-known equestrian monument is placed in front of Alte Feste.

One of Windhoek's most prominent landmarks is the Christuskirche or Christ Church. The Lutheran Church was constructed in 1907 and opened in 1910 after the end of the Nama and Herero War. It is the oldest Evangelical Lutheran church in Namibia. The building is perched slightly above the city in the heart of the historical part of town. The spire stands 24 meters and the building is constructed of mostly local quartz sandstone.

The neo-gothic and art nouveau style combined with stained glass windows donated by Wilhelm II gives the Christuskirche its unique character. The clock from Germany and the marble altar from Italy are notable features. The Christuskirche is located on a circle on Fidel Castro Street and Robert Mugabe Avenue.

The township of Katutura owes its existence to Namibia's colonial past. After the First World War, the territory of South West Africa (now Namibia) passed from German colonial rule to being governed by South Africa (under a League of Nations mandate). South West Africa was virtually incorporated into South Africa and governed as a fifth province, rather than as a colony or separate territory.

This meant that the Apartheid rules from South Africa were enforced within the territory as well (with a few exceptions). As a result of these laws and the policy of township areas for various ethnic groups were created in town. Windhoek had three major divisions: the city of Windhoek, mainly for whites, Khomasdal, for coloreds (people of mixed race), and Katutura (for blacks). Katutura was further divided into areas based on ethnic and tribal designations.

There is an open aircraft center just near the new Hilton Hotel in Independence Avenue which you can visit to buy souvenirs to take back home. The craft center in the Old Breweries Building in Tal Street is the primary outlet for Namibia's local creativity. The Namibia craft center provides an excellent platform for Namibian craftsmen and entrepreneurs and has been a factor in providing jobs and livelihoods for many Namibians.

Visitors can purchase anything from beauty products to clothing, music, jewelry, baskets, woodcarvings, and the legendary mopane worms. The venue now includes a designated parking area, coffee shop, photographic studio, and the headquarters of the Hospitality Association of Namibia (HAN).

Tintenpalast - 30 minutes walk around in gardens

The Tintenpalast (German for “Ink Palace”) is the seat of both chambers of the Namibian legislature, the National Council and the National Assembly. It is located in the Namibian capital of Windhoek. The Tintenpalast, which is located just north of Robert Mugabe Avenue, was designed by German architect Gottlieb Redecker. It was built by the company Sander and Kock between 1912 and 1913, out of regional materials as an administration building for the German government, which colonized Namibia at the time.

As an allusion to the large ink usage by the workers in the building, it was named “Tintenpalast” or “Ink Palace”. The building is surrounded by the Parliament Gardens which is very popular with the locals.

Windhoek Railway Station (in German Bahnhof Windhoek) is a railway station serving the city of Windhoek, the capital of Namibia. It is an important station in the Namibian rail network and it is run by TransNamib. The first railway line to reach Windhoek was the one from Swakopmund, built in 1902 during Imperial Germany's colonial rule of German South West Africa. In 1914 this line was extended to Walvis Bay.

The southern line from Lüderitz (built 1906) was connected via Keetmanshoop to Windhoek in 1912. In 1930 the eastern line to Gobabis was built. Windhoek is connected to a number of towns in the north of Namibia via the railway junction in Kranzberg, which lies on the Windhoek-Swakopmund-Walvis Bay route. The locomotive which stands in front of the station is one-half of a South West African Zwillinge No 154A, the sole surviving specimen of this type of steam locomotive.

This special spot in the Wanaheda section of Katutura, Windhoek, is not really a village, but a place where tourists can sit on logs and eat local food around the fire whilst being entertained by a traditional cultural performance and stories based on some of Namibia's oral traditions. The shop next to the eating area contains the range of ‘Pewa’ cosmetic products that have all been created from Namibian plants and based on their traditional uses.

Ethnic decoration that takes you back to the African roots at the same time having rich African and Namibian flavors nourishing your body and soul. While in Katutura there are several other places of interest to visit such as the Soweto Market, Single Quarters to taste open fire barbecued meat, Eveline Street etc.

You can book a full day at Gocheganas Wellness Village, at an additional cost. For more information, please sent an inquiry to Blue Crane Safaris.