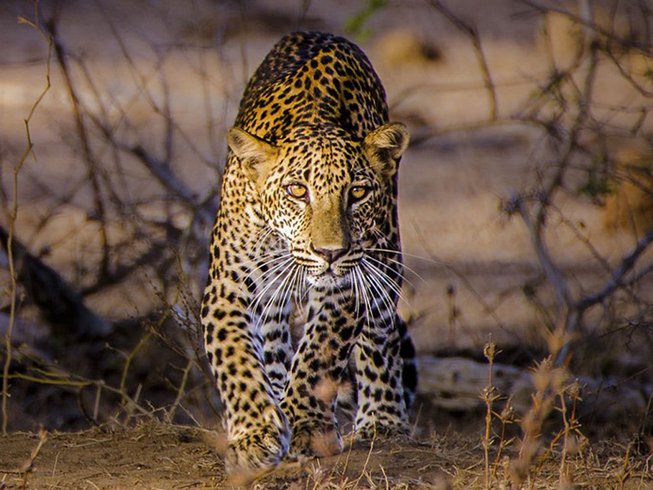 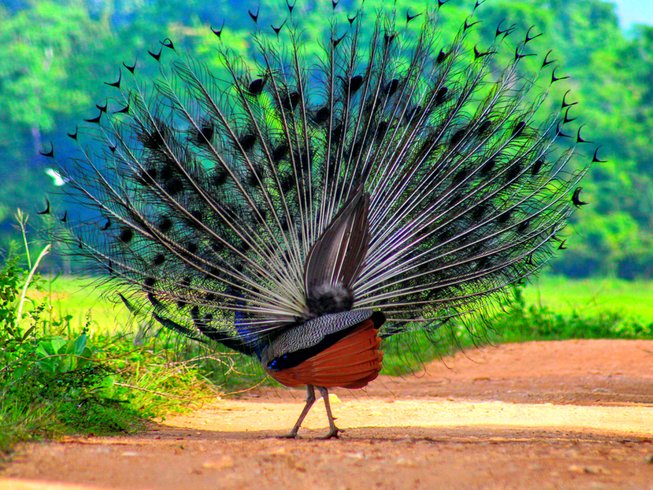 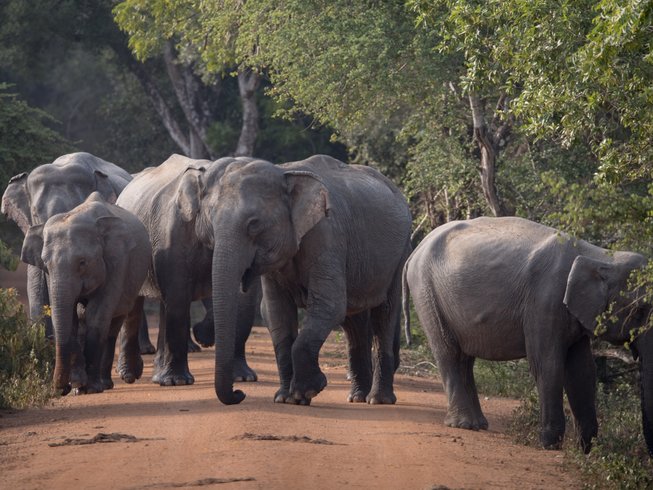 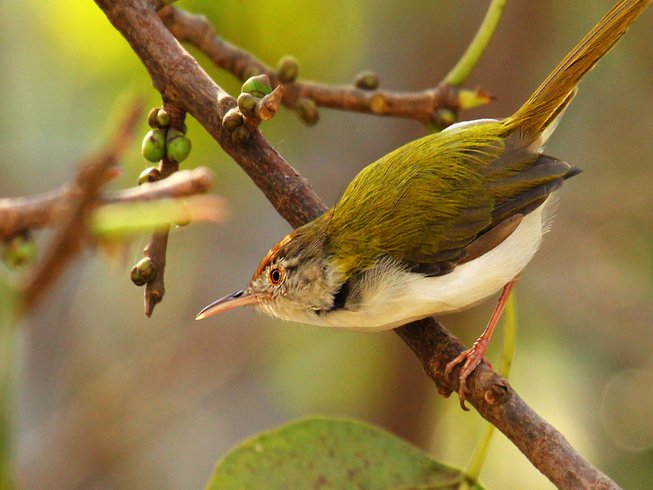 Wildlife photography is one of the most challenging forms of photography that gives an opportunity to collect lifetime memories. This tour includes four different wildlife sanctuaries including one rain forest and three national parks that are famous for different wildlife habitats. You will have the opportunity to photograph the nature wonders at Sinharaja Rainforest, leopards in Yala National Park, elephants in Udawalawe National Park, and birds in Bundala National Park whilst enjoying the luxury comfort at the best wildlife accommodation options.

In this wildlife tour, you will be accommodated in Rainforest Eco Lodge and the Leopard Nest.

The Rainforest Ecolodge, Deniyaya has been designed to preserve and provide a sensational experience of the forest habitat in all its glory. The symbiotically blended forest environs to comfort and privacy tendering the best possible commune with nature. Environmentally-friendly alfresco room, observation deck, lounge, and meeting room form key components within each unit. Guests can also enjoy the spellbinding view from any part of the lodge. The colourful, breathtaking opera of endangered ‘local culture’ can now play every day to the concert perch of the open viewing deck.

Feel at home within 16 comfortable chalets that are designed with recycled material and adorned with every amenity imaginable. The chalets are situated among the tea patch and offer guests breathtaking views of the forest canopy and tea estate that provide for lasting memories. Experience the vibrant shades of nature all at once. The interior is ideally decorated with bamboo paneling while the floor and private deck done with rejected railway sleepers. It’s a fitting introspection to dazzling biodiversity.

For wildlife travelers who seek luxury glamping experience, the Leopard Nest is a unique campsite that returns the true essence of an ultimate glamping experience with elegance, romance, and adventure while minimizing the environmental footprints. They make the difference in the wild and provide authentic wild experience with large tents and nests that are unique in design and exclusive in comfort.

Overlooking the green forest with a distance view of the Indian Ocean, the tree nest provides a unique experience to the guests. This unit consists with one double room and opens deck that gives an enormous opportunity to enjoy the nature whilst enjoying the comfort of a tree house nest at an elevation of 22 feet above the ground level.

Surrounded by thick bushes with a shade of a large tree, the jungle nest provides a real jungle glamping experience to the guests. This unit consists with a large bed room with enough space to include an extra bed and a large deck to enjoy the glimpse of wildlife.

Overlooking the green forest with a distance view of the Indian Ocean, the sky nest is located at the tip of the trees surrounded by the thick forest. This unit consists with a large bed room with enough space to include an extra bed and a large deck that provides an opportunity to enjoy the aerial view of wildlife.

Surrounded by beautiful thick bushes and nice trees that provide enough shading to enjoy the natural breeze, the family tent provides an exclusive glamping experience to the guests. This unit consists with Large Bed room, living room, en-suite bath room and a large deck that gives enough space for a family to enjoy the wildlife with more comfort.

Overlooking some beautiful landscapes and thick bushes, luxury tent provides a comfortable luxury glamping experience to the guests. This unit consists with a large bed room and a large deck enabling the clients to enjoy the surrounding environment whilst reading a book from the library.

You will be picked up from Colombo or any other beach destination in south west coast of Sri Lanka and driven to Sinharaja (approx. 3 hours’ drive). On arrival at the Sinharaja, you will check in to the Rainforest Eco Lodge.

Late afternoon, your nature guide will take you on a memorable trekking tour in the Sinharaja rainforest which is one of the eight UNESCO World Heritage sites available in Sri Lanka. With so many species of endemic flora and fauna, Sinharaja will create a big opportunity to photograph some wonders nature creations.

After breakfast, you will be driven to Udawalawe (approx. 3 hours’ drive) where you will start a game drive at Udawalawe National Park which is one of the best homes for Asian elephants. This will be another great photographic opportunity that is totally different to Sinharaja. On completion of the safari, you will enjoy your lunch at Grand Udawalawe Hotel and then drive to Yala National Park.

Wake up at dawn around 5:00 a.m. to freshly brewed ceylon tea or coffee. Then leave on morning game drive at 5:30 a.m. with your camera to photograph the thrilling adventure of Yala National park including roaming elephants and more leopards per area than anywhere else on the planet! Return from morning game drive at 9 - 10 a.m. to freshly squeezed juices from seasonal fruits followed by breakfast.

After breakfast, you can relax and unwind by taking a nap in the hammock or checking books about wildlife in the library.

After lunch at the campsite, you will be taken to Bundala National Park which is an excellent choice for bird watching and photography.

Wake up early morning and start a trekking tour with the naturalist to Nimalawa Lake where you will have another different photographic opportunity. Return to campsite in time for breakfast. After breakfast, you can explore the village and experience the village life in the surrounding area and arrive at the campsite for lunch.

In the afternoon, you will start your game drive at Yala National Park to have another chance of photographing the leopards.

After breakfast, you will be driven back to Colombo or your beach hotel situated in southwest coast.

Sinharaja Rainforest is a world heritage site and major ecotourism destination, which can also be described as a Tropical Lowland Rainforest or Tropical Wet Evergreen Forest which covers an extent of approximately 11187 hectares. Whatever its ‘technical’ name, it is undoubtedly a rich treasure trove of nature with a great diversity of habitats and a vast repository of Sri Lanka’s endemic species found nowhere else in the world.

Bird watching in this ecosystem is particularly interesting because it is home to 95% of the endemic birds of Sri Lanka, named as a world heritage site in 1989. This lowland evergreen rain forest is steeped in deep legend and mystery. The word ‘Sinharaja’ means, Lion (Sinha) King (Raja), and it is popular belief that the legendary origin of the Sinhala people is the union between a princess and the lion king who once lived in the forest. You will be privileged to learn of geology, plant lives and animal lives during the trekking with a naturalist.

Half day game drive to Udawalawe National Park is a 3-hour game viewing opportunity with Beyond Escapes Safari Team. This national park was created to provide a sanctuary for wild animals displaced by the construction of the Udawalawe Reservoir. It lies on the boundary of Sri Lanka’s wet and dry zones. Udawalawe is famous for Sri Lankan elephants, which are relatively hard to see in its open habitats.

Many elephants are attracted to the park because of the reservoir. Other than the elephants, the park is home to water buffalo, water monitor lizards, sambar deer, monkeys and the occasional leopard, as well as it is an exciting location for bird enthusiasts.

Yala National Park is situated in Sri Lanka’s dry zone, made up of scrub jungles, water reservoirs, brackish lagoons, and riverine habitats. It has the highest population density of leopards in the world, and is also home to a herd of 300 to 350 elephants. As well as leopards and elephants, keep an eye out for animals including sloth bears, black-napped hares, spotted deer, sambar, hanuman langurs, toque monkeys, stripe-necked and ruddy mongooses, wild boar, and golden jackal. You may also see the enormous land and water monitors and, of course, marsh crocodiles.

Half day game drive to Bundala National Park is a 3 hours game viewing opportunity with Beyond Escapes Safari Team. This is an important wintering ground for migratory water birds. Bundala harbors 197 species of birds, the highlight being the greater Flamingo, which migrate in Large Flocks. Every species of water bird found in the country can be sighted here. Occasional elephant, spotted Deer, sambar, hanuman langur, toque monkey, stripe-necked and ruddy mongooses, wild boar, golden jackal, land and water monitor and marsh crocodile can be seeing during your safari. They provide light refreshments and water bottles during the safari.

Dinner and breakfast at Rainforest Eco Lodge, lunch at Grand Udawalawe on day two, all meals at campsite from dinner on day two to breakfast on day five, and mineral water bottles during the tour and safaris will be provided. Vegetarian option for the meals is available, please advise Beyond Escapes at time of booking if required.

Please book your flight to arrive at Bandaranaike International Colombo Airport (CMB). Airport pick up will be arranged based on your flight details.