7 Days Northern Circuit Safari Tour in Tanzania
This listing has no upcoming availability. Check out these similar experiences 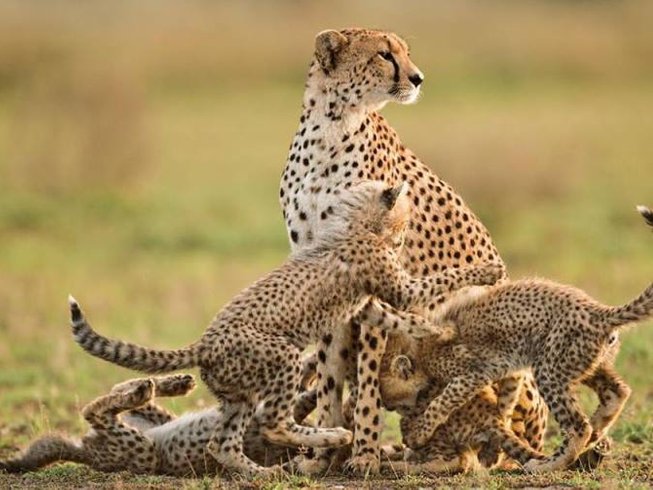 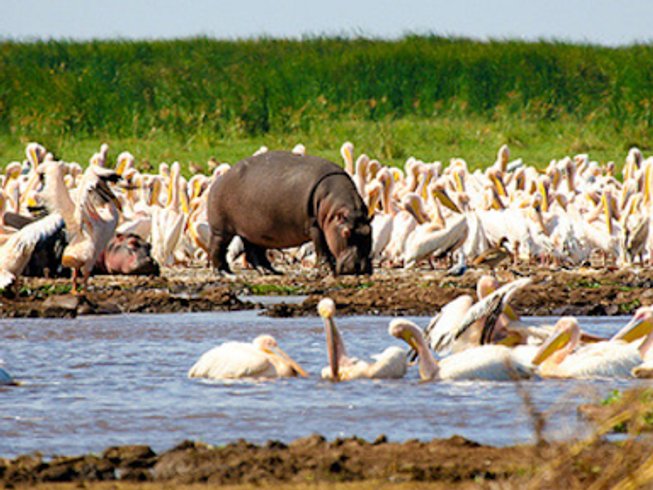 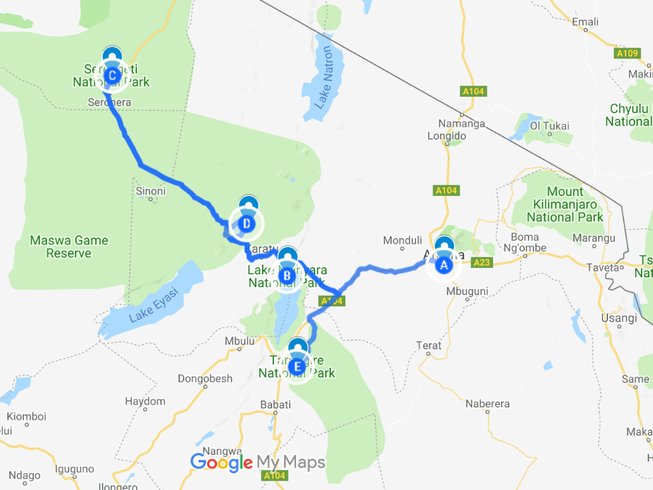 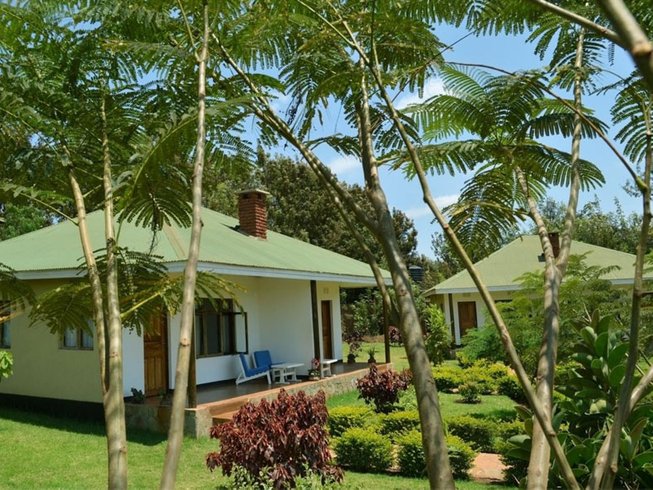 See animals in the wildlife-rich spots in this safari in the Northern Circuit of Tanzania. This will give you an opportunity to become a real adventurer exploring the majestic wildlife and wilderness. Experience the natural beauty and distinctive environment of Tanzania in an up close and personal manner. This safari will take you from Arusha to Lake Manyara National Park, Serengeti National Park, Ngorongoro Crater, and Tarangire National Park.

You will be staying in the following accommodations during this safari:

Pick up from the hotel in Arusha at 9 a.m. and drive on tarmac road for 130 kilometers with lunch box to Lake Manyara National Park (330 square kilometers or 127 square miles) on the base of the Great Rift Valley, for an afternoon game drive.

The park is home to lions, hippos, elephants, zebras, buffaloes, giraffes, baboons, Blue and Vervet monkeys, warthogs, and more. About 350 species of birds have been recorded. This small park contains also five distinct vegetation zones, thus supporting a large variety of birds and animals. Lake Manyara National Park is also famous for its large flocks of flamingos. Dinner and overnight at Country Lodge.

Breakfast at around 7 a.m. Pick up from the lodge at 8 a.m. and drive to the Great Serengeti National Park (14,763 square kilometers or 5,700 square miles) with your picnic lunch packed and game drives en route via Ngorongoro Crater rim.

After breakfast, continue with both morning and afternoon game drives in Serengeti National Park. Remember that this is the migration safari, so as Serengeti is very large as your game drives will depend on the move of the migrants, your guide knows very well how to locate the herds.

The Serengeti means endless plains in Maasai language. In the central plains, there are carnivores like leopards, lions, hyenas, and cheetahs. This park is normally the scene of the annual migration of wildebeest and zebra that occurs between the Kenyan Mara and the Serengeti.

Wake up at 6 a.m. for early morning game drives in Serengeti and return at 9 a.m. to the campsite for breakfast. Then check out and drive with lunch and game viewing en route to Ngorongoro Crater rim. Ngorongoro Crater is the largest unbroken caldera in the world and has an area of 260 kilometers and a depth of 610 meters.

The crater provides a protected habitat for thousands of mammals and birds. The entire day is spent on the crater floor viewing lions, hyenas, wildebeests, zebras, black rhinoceros, and many species of small antelopes. The Ngorongoro Conservation Area is located between the Serengeti and Lake Manyara. It is home to the famous Ngorongoro Crater which is the largest unbroken caldera in the world.

The crater is a spectacular setting in which to experience your African safari. Some scientists maintain that before it erupted, Ngorongoro Crater - the largest intact caldera in the world - would have been higher than Mount Kilimanjaro, the highest point in Africa.

Covering a mere 260 square kilometers (100 square miles), the 600 meter (1969 foot) deep crater is home to a permanent population of more than 30,000 animals. It is one of the few places in Africa where you stand a very good chance of seeing the Big Five (lion, leopard, buffalo, rhino and elephant) in the course of a game drive.

The local Maasai have permission to graze their cattle on the crater floor, and it is not unusual to see Maasai cattle and buffalo grazing together with lions mere meters away. There are around 1000 lions in the crater, approximately 20 black rhino, and the spectacular Lerai Forest is one of the best places in Africa to spot leopard. Dinner and Overnight a Country Lodge.

Wake up early morning for breakfast then at 7:30 a.m., descend into the crater floor (19.2 kilometers of diameter, 610 meters deep, 304 square kilometers) for game drives.

All the Big Five (rhino, lion, leopard, buffalo, and elephant) live in this wonderful caldera, others are zebra, hippo, wildebeest, hyena, and more. Birds include flamingos on the soda lake, geese, storks, vultures, and more.

Tarangire National Park is most spectacular during the dry season when thousands of animals migrate into the park from the surrounding dry Maasai steppe, to use the permanent water supply of the Tarangire River. You can see herds of elephants, numbering over a hundred. Tarangire is also renowned for its tree pythons, which are easily seen.

The animal population in the dry season rivals that of the Serengeti with wildebeest, zebra, eland, hartebeest, buffalo, gerenuk, fringe eared Oryx, and flocks of birds of many different species. Prime game viewing is between July through November.

The famous and giant baobab trees dot the park, their branches looking just like roots. Some of the baobab trees are over 300 years old. Legend has it that a displeased god turned them upside down at the time of creation. Your lunch will be served in the picnic site in the Crater at Ngoitoktok swamp a hippo pool. Dinner and Overnight a Country Lodge

Breakfast at 7 a.m. Drive with your packed lunch into Tarangire National Park (2,850 square kilometers or 1,005 square miles) for the morning game drives.

The park is a home to lions, leopards, elephants, buffaloes, pythons, zebras, oryx, impala, and more. Over 450 species of birds have been observed here. Thereafter lunch, make your last game drive enroute to Arusha for drop off in Arusha town or Arusha Airport (ARK) for your flight.

This beautiful park is famous for its tree climbing lions, large buffalo, wildebeest, baboons, blue monkeys, elephants and perfect introduction to Tanzania’s birdlife. Stretching for 50 kilometers along the base of rusty-gold 600-meter high Rift Valley escarpment, Lake Manyara is scenic gem , with a setting described by Ernest Hemingway, as “the loveliest I had seen in Africa’’.

It consists of a thin green band of forest, white-hot shores of an ancient soda lake. This wedge of surprisingly varied vegetation supports a wealth of wildlife, nourished by the streams flowing out of the escarpments base and waterfalls spilling over the cliffs.

It has greatest concentration of species of bird, more than 400 species have been recorded and you can observe up to 100 of them in a single day. It has thousands of pink hued flamingos on their perpetual migration; also it includes large water birds such as pelicans, cormorants and storks.

Acacia woodland shelters the park’s famous tree-climbing lions, lying among the branches in the heat of the day. Feeding in the undergrowth or dozing in the dry riverbeds is a country’s densest populations of buffalo and elephants. In the deep southern side of the park, hot springs, bubbles to the surface as hippo wallow near the lake’s sedge-lined borders.

The Serengeti National Park is a Tanzanian national park in the Serengeti ecosystem in the Mara and Simiyu regions. It is famous for its annual migration of over 1.5 million white bearded (or brindled) wildebeest hooves pound its endless plains and 250,000 zebra and 300,000 Thomson’s gazelle join the wildebeest’s trek for fresh grazing and renowned for its wealth of leopard, lions, African wild cats and for its numerous Nile crocodile.

Not only is it Tanzania’s oldest and popular national park but the mighty Serengeti is one of the best wildlife sanctuaries in the world. This park has been declared a World Heritage Site.

The vast reaches of the park are a hiding place for the endangered black rhino and provide a protected breeding ground for the vulnerable cheetah, alongside the Serengeti’s thousands of other diverse species, from the 500 varieties of bird to 100 different types of dung beetle.

Serengeti offers sensational game viewing in Africa with great herds of buffalo, smaller groups of African elephant and giraffe, and thousands and thousands of eland, topi, kongoni, impala, and Grant’s gazelle. Overall, Serengeti has about 35 species of plains animal including big five and has 500-plus bird species ranging from the outsized ostrich and bizarre secretary bird of the open of the open grassland, to the black eagles that soar effortlessly above the Lobo Hills.

After the rains, the Serengeti’s magical golden horizon is transformed into an endless green carpet, flecked with wildflowers. The famous plains are interspersed with wooded hills, towering termite mounds, monumental rocky kopjes, and rivers with elegant acacia trees.

Ngorongoro Conservation Area boasts a blend of landscape, wildlife, people and archaeology that is unsurpassed in Africa. Often referred to as the African Eden and the Eighth Wonder of the World, it is also a pioneering experiment in multiple land use means to allow humans and wildlife to coexist in a natural setting.

Africa’s Big Five are found on the crater floor as well as large herds of buffalo, zebra, wildebeest, and many big cats. The crater alone has over 20,000 large animals including some of Tanzania’s last remaining black rhinos.

Volcanoes, grasslands, and mountain forests are home to an abundance of wild animals and to the Maasai people .Open grasslands cover most of the crater floor, turning yellow with wild flowers in June.

The Makat Soda Lake is great attraction for flamingos and other water birds, while predators hide in the marsh to ambush animals that come to drink from the river that feeds the lake. Swamps on the crater provide water and habitat for the elephants and hippo as well as the many smaller creatures such as frogs, snakes, and several cats.

Tarangire National Park is located 118 kilometers (75 miles) southwest of Arusha Town. The dry season is a spectacular time to visit Tarangire, the day after day of cloudless skies seem to suck all the moisture from the landscape, turning the waving grasses to platinum blonde, brittle as straw and it is at this time of the year when the thirsty elephants and antelopes marching hundreds of kilometers to Tarangire river, a mere permanent water source that flows across the length of the park chocked with wildlife..

In search of underground springs, herds of three hundred African elephants dig in the damp earth of the riverbed while wildebeest, zebra, buffalo, and gazelle mingle with a rare species such as eland and Oryx around each shrinking lagoon.

Pythons climb into shade of the trees that line Tarangire’s massive southern swamps and hang there like giant malignant fruit coils neatly arranged over the branches in a perfect sphere. it is during the dry season when Tarangire enjoys the greatest concentration of wildlife ever present to fascinate visitors with their grace, intelligence and majesty.

Your daily breakfast, lunch, and dinner during this safari are included in the price. Mineral water will also be provided.